I have seen on a number of forums the use of Assault Melta Squads as the go to option for busting tanks open so added that into my army. It was first brought to my attention by our own Sam who highlighted that it was cheaper (in points) to field an Assault unit instead of using a Tactical Squad with Meltas.

It took a bit of research for me to decide on which box to buy into as I wanted the option to run this squad both on jump packs as well dropping in from a Drop Pod or riding in a Razorback. I looked into the new Assault Squad boxed set (for the new Evicerator) and Vanguard Veterans (for all the nifty weapon options) but eventually settled for our trusty old Death Company boxed set.

All 3 boxes have the jump packs, the bolt pistols and chainswords (which I needed). However, the Vanguard Veterans did not have spare backpacks and I don't have any spares! That left me with the Assault Marines and the Death Company sets. While the new Assault set was cool and all, it was a little sparse in Blood Angel details. I have been gobbling up quite a number of parts from my other box of Tacticals so I eventually decided on the Death Company. It was also cheaper! It gave me the option of building them as Death Company (as I will only be using 2 of the 5 models from this set to complete my Drop Pod Assault Melta Marines). 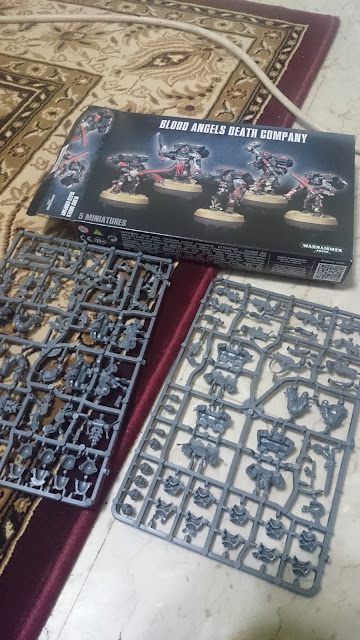 This set has all the Blood Angel bling. Some of course has the Death Company marks but could easily be hidden by smart parts usage.

I took the time to magnetize all the weapon options for the weapon specialist. It is not very hard. Just make sure you've got the right magnet size that matches with your drill bit. Put a bit of super glue and bam it's done. Now my Weapon Specialist can take double Inferno Pistols, Hand flamer, Plama Pistol, Flamer, Melta and even a Grav Weapn. As he has no helmet on, he can jump between the Tactical squad or the Assault Squad.


As the Drop Pod was finished in Month 2 of the Slowburn League, I didn't have to worry about getting them a pod. Will finish up the Rhino and post pics once it is done as well.
Posted by Anything But Ones at 8:38:00 AM