As the month comes to a close and it is time for the Show and Tell at Titan Games, I have put the finishing touches on most of the models. Some models like the Drop Pod is getting an extra level of paint job owing to some scratches during game last week.

Because we skipped the Show and Tell for Month 2 owing to the 2v2 at ITE, we will be showcasing all our models for the 2 months of work, both Month 2 and 3.

The Blood Born
Two months have passed since Sergeant Rayzor and his squad was thrown into the thick of fighting at Centraite Homeworlds. With the Magos Biologicos still missing, reinforcements were called in.

Once arms were handed out to the squad and the unit was bolstered with Marines from the 3rd Company, High Priest Corbulo stepped off the Stormraven to acknowledge the Sergeants' efforts in pushing the war front. 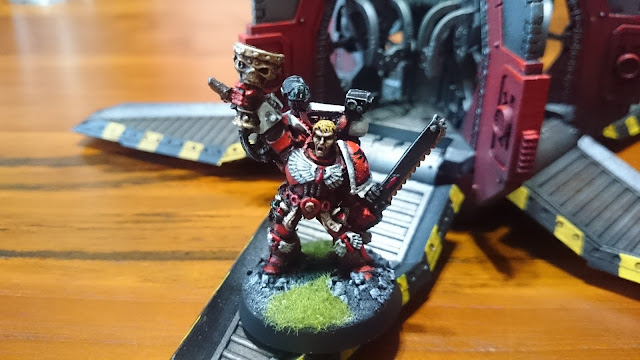 "Fear not brother, the Chapter provides."

When pushed into a corner, the Blood Angels push back. The 'Blood of the Fallen' Sicaran Battle Tank is a reminder that great sacrifice must be made ensure the dominance of Man in the Galaxy.


Not sure why all the red in the pictures look so washed out. May have to look into a better camera!

Sergeant Gorro quickly rearms his Squad by swapping out the Heavy Flamers for another Meltagun. His squad's role would be penetrate deep into enemy territory, going for their hardest targets. This often meant that Squad Gorro would suffer catastrophic losses but their efforts have assisted with the success of multiple missions undertaken by the Chapter.

The task force continued with the advance, seeking for their objective. In one gory battle, a hero emerged.
Brother Hiron's unit disembarked from his Drop Pod together with Sergeant Gorro. It was deep in enemy territory and he had a desperate mission. Gorro opened fire on the Chimera hidden behind the ruins and managed to take it out with his Combo Melta. The Guardsmen realised the threat and opened up on the unit, taking everyone out except for Hiron. Brother Hiron threw himself through the wall, punching through the broken door and came face to face with the enemy Warlord. He fired with his Bolt Pistol and let out a resounding shout to the Emperor and charged in. Sanguinus was with him that day. The enemy was caught surprised by the moment and having seen what the embodiment of the Emperor could do, quaked. The enemy Warlord would have no more of this and fled the battlefield. Brother Hiron picked himself up, leaped up to take cover in the ruins. Mission was a success.

In the next month that followed, the enemy started throwing hordes of troops at the Angels of Death. What better way than to respond with our own. 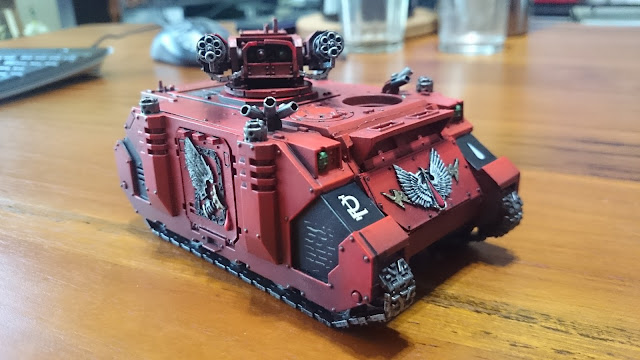 I hope you guys are happily painting and bringing a fully painted force to the table soon! Looking forward to seeing all!

For those of you who missed out on Month 1's Show and Tell, here is the story I wrote for my Kill Team.

Having just completed his stint with the Deathwatch, Sergeant Rayzor was thrown right back into the thick of fighting. Having almost no time to repaint his armor, Rayzor reported for duty within the day and immediately rejoined his old squad. There were new faces, recruits recently pulled in from the Scout squads of the 12th Company. Rayzor was to lead a small kill team comprising some veterans, some newer recruits and his specialists.

Agle is the team's Weapon Specialist. He can usually be seen carrying a vast array of Master Crafted weapons, polishing them to a fault. With a sharp eye he has finished his time with the 12th as a Marksman earning his nickname Eagle Eye.

Manny recently recovered from a major defeat at May Weather Court in the Elvee System rejoined his brethren a changed marine. Something within him snapped during the long campaign and what used to be a calm and collected individual is now a rash and feisty marine. He courts the death angel on every engagement and his brothers worry that he will slip into the abyss.

Harsh is the quiet and brooding brother of the squad. Moving silently for an 8 foot tall Marine clad in power armor seem impossible but Harsh treads as light as a feline. A weapon expert, he carries a tarpaulin under his power pack and can often be seen with extra heavy ammunition.

While the Kill Team are the executors of the Emperors Will, the Scouts of Sergeant Orion are the eyes. Relaying important tactical information back to Sergeant Rayzor, they work in tandem to ensure that each surgical strike lops off the threat at the source before it escalates. Concealed in camo cloaks, these Scouts operate silently but deadly.
Posted by Anything But Ones at 9:32:00 AM