That was what greeted Cryptek Y’san when awareness returned to his living metal frame. The stillness of the crypt was almost stifling, if he could still feel such a thing. A Harbinger of Eternity, with the power to control time and molecular speed, Y’san became aware of his Wraiths patiently waiting in the halls beyond his chamber, and he realised why he had been awoken.

Strange beasts with purplish-black carapaces stalked the Tomb World known as Willow, getting perilously close to the concealed entrances that led to the Tomb Complex. A blinking icon captured his attention. The Phaeron he had served for millenia, H’orj, had summoned him.

Y’san left his personal escort of Wraiths behind him as he stepped into the Royal Crypt. “You summoned me, your majesty?” he asked. “Ah, Cryptek, you have awoken. Your creations have maintained our Royal Court well. You should construct more of them.” The Phaeron had always been a pompous one, even for one of his kind.

“As ever, majesty, your powers of observation impress me. How may I be of service?” If the Phaeron took any notice of the sarcasm, he gave no sign. Given how self-centred he was, it was unlikely.

“I was awoken by the warning glyphs, indicating that our Tombworld had these strange insects on my Tombworld. I want to know what they are.”

“I believe they are called Tyranids majesty. Would you like to ready your troops?”

“No, I do believe you have a Transcendent C’tan kept as a pet, do you not? I feel like going on a hunting trip. One of the larger beasts would make a great prize for the stasis collection no?”

“Indeed majesty, if for some reason, you feel like your collection is missing a crazed beast.” It was a good thing metal features could not be twisted into a sneer. Many millennia of strange requests were wearing thin.

“As I thought. Ready my barge and the Scythes, and prepare to unleash your C’tan! The Dynasty of G’uang goes to the hunt!” Seeing his Phaeron fairly burst with excitement reminded Y’san of vids of human children with toys. This was the ruler of the current Dynasty. A noise approximating a sigh escaped from the Cryptek's vocabulator....

This batrep covers my 1850pt game with Raymond, who brought his TAC list to the Tombworld. I decided to bring some fromage for the final game of the Oldcrons with my Transcendent C’tan. The main idea was to use him as a distraction, while the mobility of the Tomb Blades, Barge, and Scythes would help me to secure objectives.

The Dimachaeron is the new hotness in the Tyranid world and my, I have been bitten by this bug (see what I did there?). I absolutely love this model. The detail that FW has incorporated into the kit is fantastic! Even the spines on the back have subtle ligaments joining the spines back to the main carapace. As a biology student I not only love this detail, but am amazed by the effort the sculptor took to make such a fine model. Here are a few WIP and completed models shots.


Filing in for this battle report. With the end of Shield of Baal Campaign, the gaming group is back to playing normal 40k missions. After building his Dimachaeron, Ray was anxious to test his new bio-morph in game. Bringing my SM force as they are the only ones that are close to 100% WYSIWYG. After playing exclusively with the iron hands chapter during the campaign, I decided to go back playing the Raptors chapter.

The Hivefleet Gestates its Big Bugs

Spent a few hours at Titan Games today to build some gribblies! Man these monsters are AWESOME!

So after the close game with Marshall, he challenged me for another game. Same lists, 1850 and then we rolled for the mission.

And we rolled for it, it's Tactical Escalation! LOL that makes it the exact same mission as previously! True grudge match.

This would be one of the most tightly played games I have had in a long while. Marshall and I decided to get in 1850 of 40k in today at Titan Games. 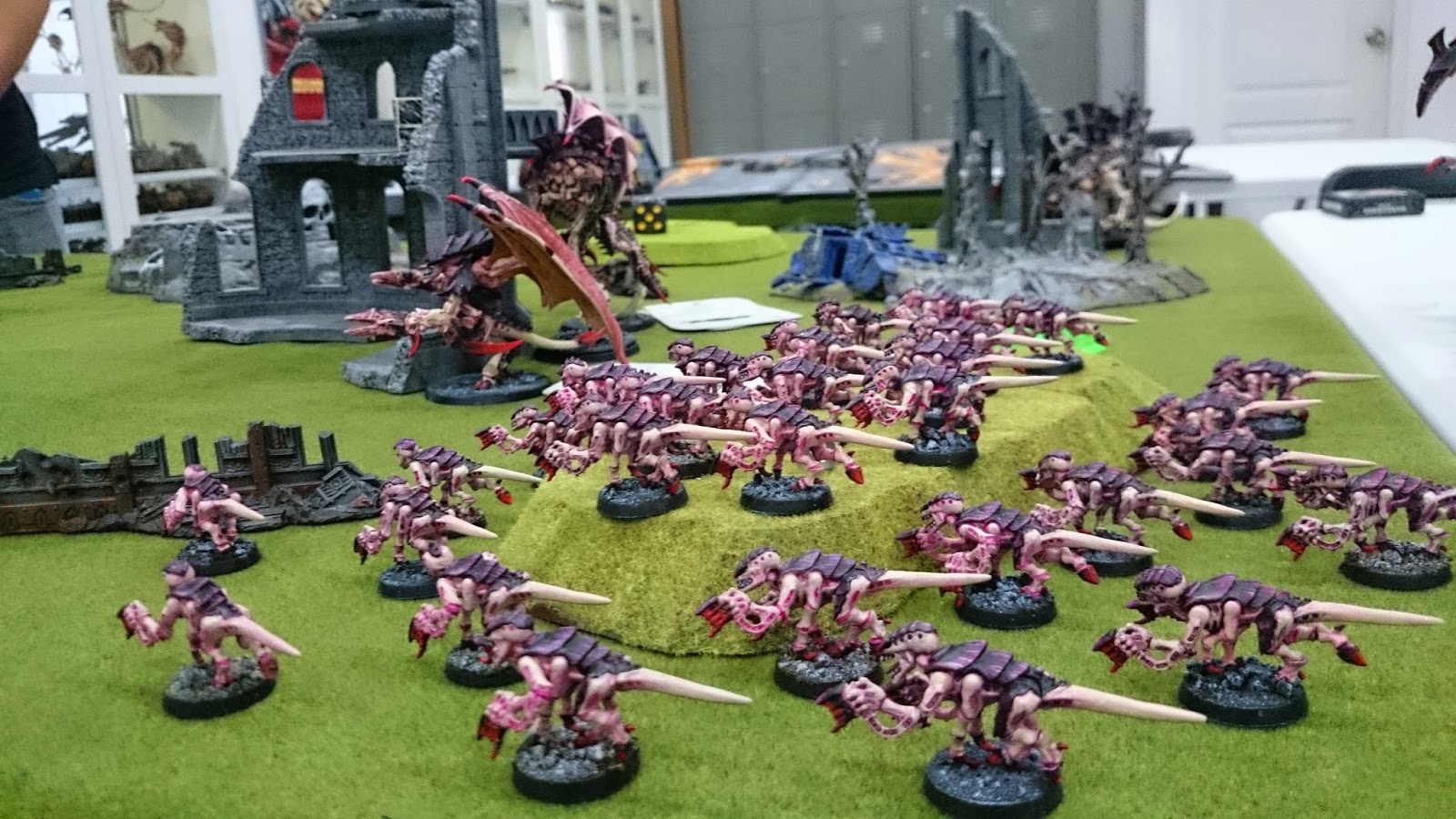 After 6 weeks of campaigning, each faction scored bonuses for the final game which took place yesterday at Titan Games. Props to them for supporting this campaign, providing us not only a dedicated place to play but supplying us with food and even sponsoring the prizes at the end!

As for the players, each player contributed to the greater fight by taking on opponents on the opposing faction and scoring bonuses which helped in the Apocalypse.
Read More >>
Posted by Anything But Ones at 11:08:00 AM No comments:

Only the toughest of creatures can survive for long on this planet. 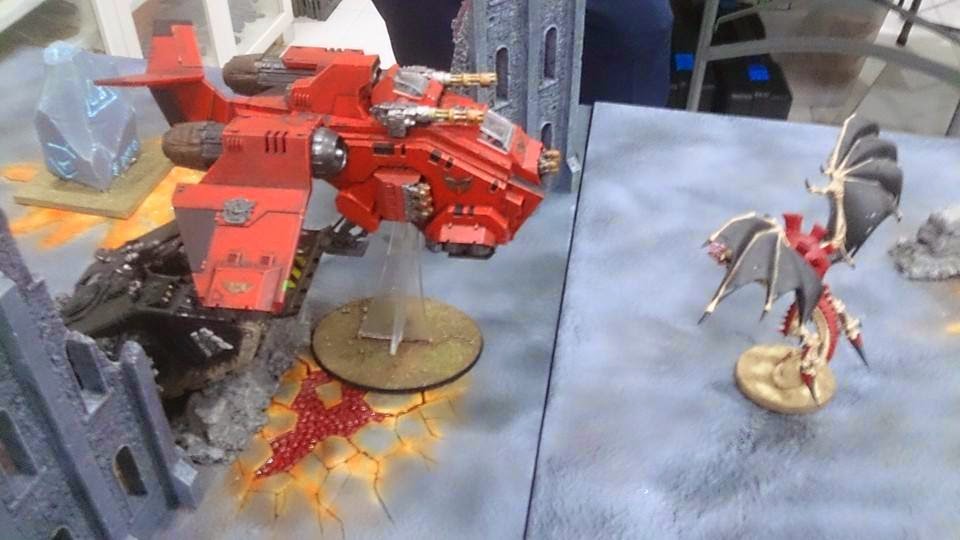 The hivemind has unleashed its monstrous swarm upon this planet and it is up the imperial armored forces to hold its defence.

Email ThisBlogThis!Share to TwitterShare to FacebookShare to Pinterest
Labels: Shield of Baal

Shield of Baal - Bonuses for Apocalypse

Now that the last week of the campaign is running, here is a recap of the few bonuses that both factions have been able to secure over the past 5 weeks of war.

Just got back in from Japan yesterday and managed to book in a game with You Cai. He brought his Iron Hands from our previous game and I tweaked my 1,850 list to the following:

The mission is unique. There is a wall of water that is washing everything out. Anything it touches immediately dies. And the objectives are unique because the Tyranids have to consume them (at the start of their turn) while the Imperial player is trying to shepard them to their table end. There are 3 of such units of "villagers" on the table. The Imperials are basically cutting their losses and are trying to pull out. The heroic Space Marines of the Iron Hands are doing their best to stem the Hivemind.

Another excellent batrep prepared by Jason who will be commanding his own Hivefleet for this game. Over to Jason.


Hive Fleet Salix hung motionless in orbit around Tartaros, alien optics stalking the every move of the prey on the barren surface. Antennae and sensor stalks told the Hive Mind what it needed to know. Radiation bathed the grey surface of Tartaros, and only the hardiest and largest of the Tyranid bioforms would be able to survive on the surface. The prey were observed to be scurrying about in their metal boxes yet again, which was not surprising, given their general frailty. A quick kill was needed, which was this particular Hive Fleet’s specialty. Bio-forms were cultivated in the biopools, and a familiar foe was awakened.

This was another 1500pt game as part of the Leviathan campaign, this time against Alan and his combined Space Wolves/IG list. I’ve had a terrible track record against Alan, with no (or maybe only one) wins against him. Still, there’s always a first time☺. This was another kill point mission, and any non MCs or vehicles would have to make a 3+ “save” or take a wound.

After the initial victory experienced on Lysios, Hive Fleet Salix had been pushed back twice in the cities on Asphodex, with much biomass being lost. That the defeats occurred were unsurprising, the Tyranids of Hive Fleet Salix were gene-tailored for lightning-fast assaults and surgical strikes, not the grinding attrition of urban warfare. Despite these setbacks, this smaller fleet that arrived with Leviathan continued to probe the Shieldworlds of the Cryptus System, and the Tyranids sought for biomass to replenish the losses suffered…

Launched from a Hive Ship in low orbit, and wrapped in a protective layer of chitin to keep it safe, the Hive Tyrant Alpha snapped open its wings the moment it hit the atmosphere. Staying just out of range of the emplaced defences, it circled the area and crafted its battle plans.

The prey were at a strategic disadvantage; letting the Swarm gather critical mass would mean they would get overwhelmed, but leaving the protective hab-domes could mean being overwhelmed in the open. All things considered, baiting them out into the open would doubtless be costly, but if things went right, less costly than infiltrating Lictors and Genestealers into the hab-domes.

The first step was to prepare the ground for the arrival of its swarm. Swooping low over the chosen battlefield area, it dropped the large seedpod it had been carrying in its claws. In a matter of a few short hours, the seed would grow into a bio-node that would generate a powerful gravitic field, shielding the Swarm’s creatures from almost any attack by sucking bullets and energy blasts down a miniature black hole. Through its synaptic connection to the main fleet, the Tyrant Alpha activated the first wave of its assault, summoning a Hive Crone which had killed many flying boxes.

A cloud of dust on the horizon caught its eye. The prey had taken the bait. It was time to close the trap.

See pics for deployment. Flyrants are actually all clustered behind the VSG (proxied with a Bastion), just that they kept sliding down the slope. Every Tyranid FMC was hidden behind terrain to reduce the impact of the (very scary) shooting. Imperium’s tanks were spread out in a battle line.