Another beautiful army at GRX, this time with a really gruesome board! Nick made matching terrain to go with his board as well as minis, thus creating a really strong narrative. He has always created beautiful armies. I can however spot the airbrush sheen on them. Ah, I will join the ranks soon as my Hive Broods stir.


Damn these guys are good. Make me look like a noob!
Posted by Anything But Ones at 9:17:00 AM No comments:

Saw this beautiful army on display at GRX so I want to show it to you guys. I do believe it belongs to a chap called Zach. Just beautiful. His painting skills are superb. Even homage to the Ravens from Dawn of War. Enjoy!

Love it! Hope this inspires you guys to go out and just get some models painted!
Posted by Anything But Ones at 9:14:00 AM 1 comment:

I did not manage to get in a game of 40k this week but instead took part in the local X-Wing 100 Point Tourney held over at Gamersaurus Rex. Brought a list I flown twice so did not really expect to do that well. Ended finishing either 5th or 6th but got a ton of prizes.

Loot:
Had good fun and learnt quite a bit from piloting. Got to learn my smaller curves and manouvres!

Hope you guys had a great weekend gaming!
Posted by Anything But Ones at 9:10:00 AM No comments:

Imperial Guard of the Necro-8th regiment. First goal of 2014.

So my first completed models of 2014 are the men of the Imperium. 20 Veteran guardsman. Well, I cheated a little, these models were actually almost nearing completion some 3 years ago (built up the Necro-8th during 5th Edition). But that's not gonna take away my claim for "completed models for 2014"! Because thats exactly what I did. Complete them!

This final push I have invigorated for this army is due to the fact that I would want to play more 40K this year as well and the looming arrival of the new Guard Book for 6th edition in March. Hopefully nothing much will be too drastically changed rendering my painted army totally unplayable.....

Below you can see all 65 models (6x Ten man Veteran Squad & 1x Five man Company Command Squad). And out of them I put the finishing touches to the first 20 Veterans. 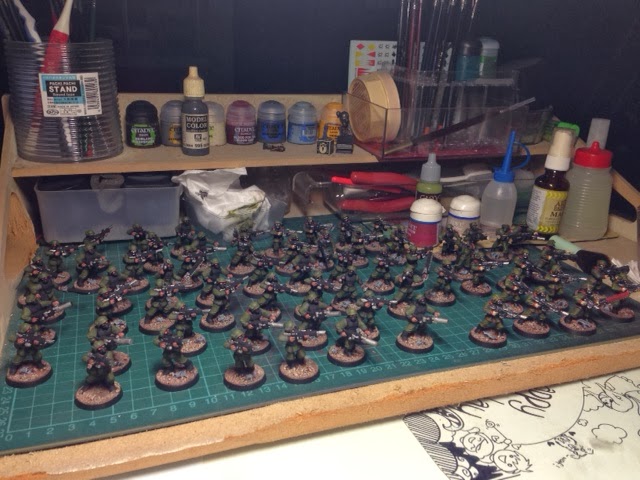 I'll talk a little more about the models I have for my Necro-8th Army. The base of the models are from the now Generic Cadian troopers. In order to make them look different I opted for less bulky armour and overall size.

The excellent Pig-Iron Gas masked heads were a perfect fit for them. Giving them a pseudo Steel Legion/Krieg look.

As you can see in the comparison to the standard Cadian model, I took a scalpel and trimmed down the shoulder pads till it looked just like a sleeve. This not only made the model more realistic (in reference to standard army fatigues) but I feel it drastically changes the shape of the whole model. 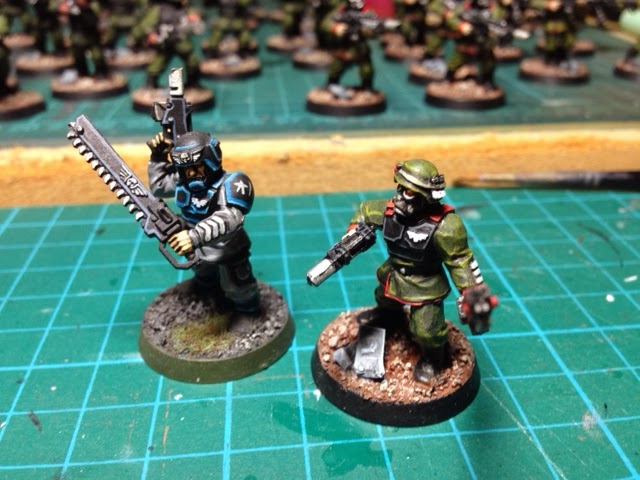 Another step I took was trimming down the side pockets, yet another bulk reducing measure. The Guardsmen of the Necro-8th looks sleek now.

However this was a painstaking process and after cutting down 20 shoulder pads my fingers were sore. Multiply that by 65 models meant 130 shoulder pads to cut down and 130 side pockets!!! 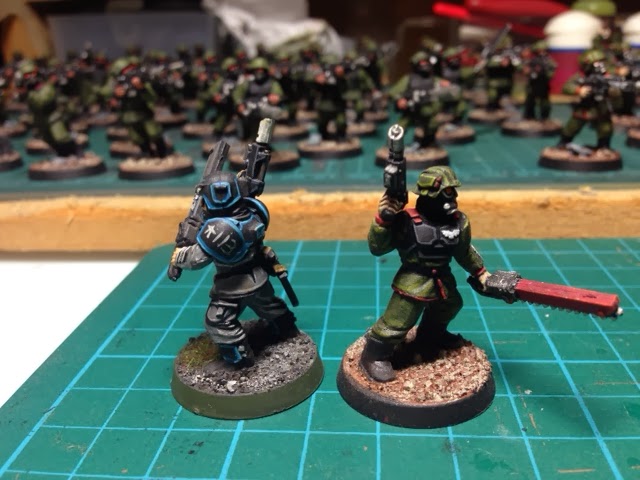 Here are all 20 of them fully painted and based.
Yay now I have 20 models to my 2014 painted miniatures count! 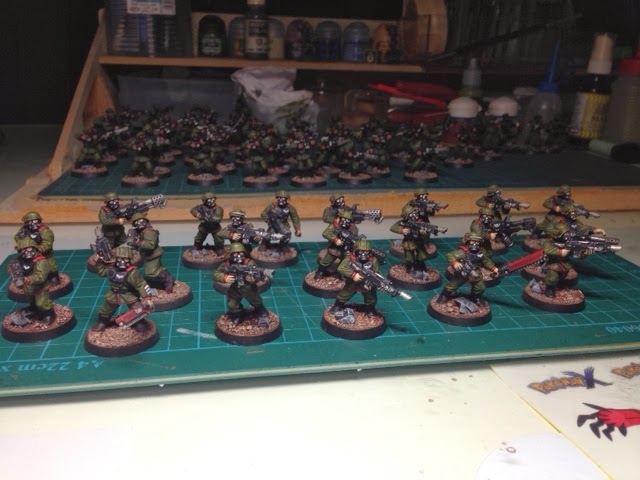 A close up shot of the completed models. 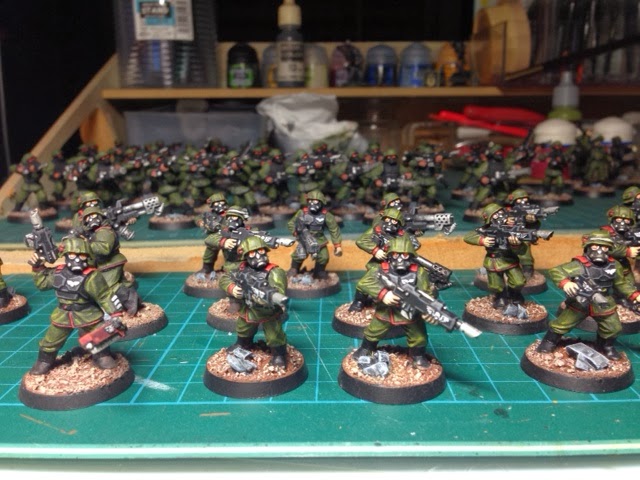 One other thing which I made a habit a couple of years ago was to date the models when they were finally completed. (complete as in finished, game over, I'm never gonna paint/repaint this model ever again kind of finished)

This is really a nifty idea (can't credit it I don't recall but it's definitely from someone else's blog, sorry!) as it helps us keep track of when we painted a model (obviously). Not only that its a nice archiving system and I regret not doing this earlier with my models before I started doing this.

Wouldn't it be nice picking up that Butt-ugly Nagash model and look under to base to see 1998? 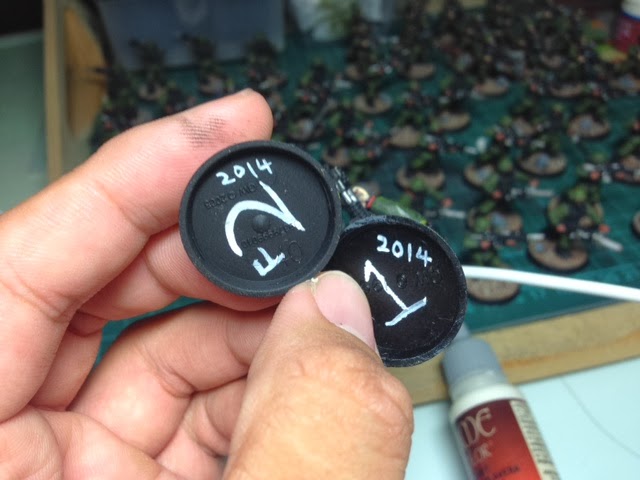 My next post will hopefully see me complete the other 45 models and then I'll move on to the Tanks of Necro-8th. Which are also abut 80% painted. Back to painting, till the next!

The boys at ABO and myself have set ourselves a 2014 Army Showcase. This means at the end of 2014 we all hope to have a fully painted with little to no proxies army.

I have been using this Eldar army quite consistently over the past few games and have had quite success with it owing to their flexibility:

The mix of troops allow me to react to opponents and is still fun for them. However, the paint scheme is really old and I wanted to update the army so this 1850 list would be the repaint.

BeefNuggets helped me with some suggestions on the paint scheme.

BeefNuggets then suggested that I stick to a 80-20 rule. Now what is that?

Eldar as an army tend to be enigmatic, aloof and pristine. It made sense that they would echo this in their uniform. Clean crisp colours together with a 80-20 formula. 80% of the model would be the primary colour while 20% would make up the other contrasting but CLEAN secondary colour.

Beef suggested I drop the greywhite and bone to replace it with white.

Yes, white. One of the hardest colours to do.

But Beef has a solution and demonstrated a simple and effective method. Grey highlighted to white in 3 steps.

Following his technique, I went out to the store to get myself 3 colours:
Simply paint each white element in 1, 2 then 3, making sure that you leave a little of each layer showing.


Beef suggested I remove all the green gems too as they were too high contrast and replace them with a more soothing red. That I did and the above is the product of about 1 hour of painting for 3 days.

This is a work in progress and I thought I would blog it to follow it's progress.

Years ago when GW did not make a Wave Serpent kit, we old gamers had to create our own. Using the Falcon as the main chassis, I used the template that was found in one of the old White Dwarves. Printed them out on plasticard and used spoons to create the turret and shield pods.

Over time GW released the Serpent kit and I went away to play Fantasy and focussed on my Tyranids.
Zoom in 2013 I broke them out and wanted to update them since I do love my Eldar.

Since I was repainting this army, I bought the FW Type 2 Wave Serpent Kit to modify my kit. Ripped out the old parts and said goodbye to them.

I love the updated look. The craft now looks sleeker and more Eldar-esque. Can't wait to start airbrushing it to update the colour scheme.
Posted by Anything But Ones at 9:00:00 AM 2 comments:

Melvin will be playing the Imperial Guard (IG) in this batrep and myself, the Eldar. I split one of my War Walkers into the other Heavy choice so it is now 2 War Walkers and 1 War Walker. Totally forgot about First Blood! What a blunder...

Anyway, we rolled the following:
Mission: Emperor's Will
Deployment: Dawn of War

My list is the same as the previous game in trying to learn and master a list first. It also allows me to focus the painting on these units:


We concluded that the Eldar would have won regardless of the Turns going up to 7.

My last unit of White Jetbikers would have just turbo boosted up to capture the last point on his side. Personally I felt that Melvin should have continued but I guess it was a difference between drawing and losing.


A good game nonetheless as it was quite hard to play against such an aggressive IG list. One thing I will not do is to separate the War Walkers. This game also made me realised the importance of the Holo Fields and Fire Prism without which I would not have survived long enough or damage potential against his Demolisher. I will keep working on polishing up this army from a paintjob perspective.
Posted by Anything But Ones at 9:00:00 AM 2 comments: