Asurmen - First of the Phoenix Lords (A Conversion Journey)

Having recently read the Asurmen: Hand of Asuryan novel, I felt inspired to include the model in my Eldar army. The problem was, the model was old enough for an M18 movie; the dated sculpt also meant that the model itself was very two dimensional, and not in keeping with the more dynamic poses of the current Eldar range. So I started this project to modernise the model slightly,and hopefully make it more resilient. 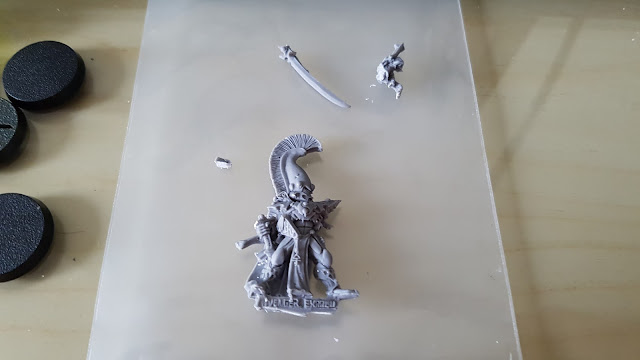 I started off by chopping off the easy to reach bits that I wanted to replace, namely the sword, and the outstretched Avenger catapult. They were also some of the parts which made the model two dimensional, since they stuck out parallel to the main body. 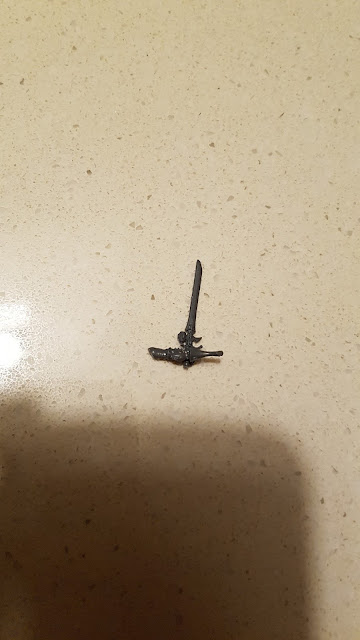 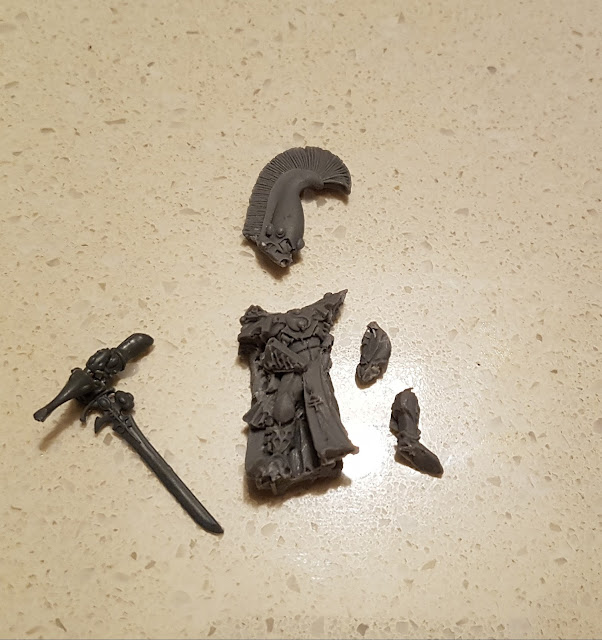 How the conversion looked at Stage 1 of the process. I also removed the head, trying very hard to keep the Avenger targeter on the shoulder, and cut off the model's left leg. This would aid in reposing the model later. 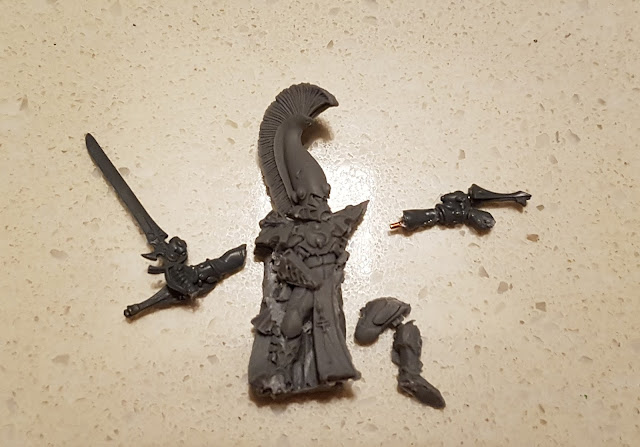 This picture shows progress on the model with the left arm conversion. I tried to keep the left arm similar to the original pose, with slight adjustments to the angle for aesthetic purposes. The left arm was also kitbashed from the Harlequin kit, using an extended left arm, another Harlequin's Kiss wrist, and a left fist from a shuriken pistol hand. The shuriken pistol from that hand was then pinned and glued to the Harlequin's Kiss wrist mount, similar to the right arm conversion. 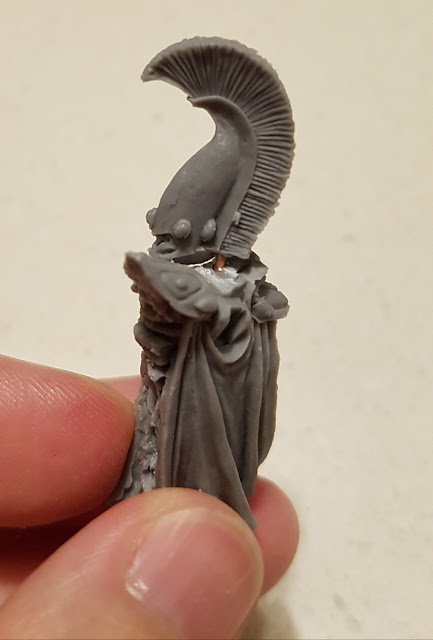 A close up of the head shows the point at which I pinned the re-positioned head to the neck. Had to greenstuff in the gaps. 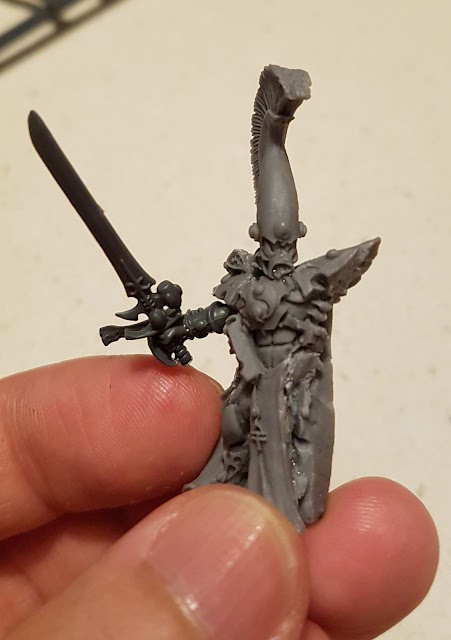 I thought the model was coming together nicely at this stage, though I would have to further drill and cut away the excess resin between the cape and the loincloth. It was at this stage where a mishap occurred and I sacrificed blood and skin cells to my hobby knife -.- 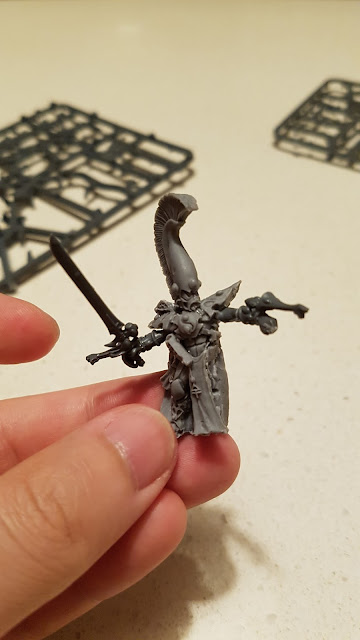 The sacrifice was worth it though, as the pinned arms and removal of excess material slowly come together to bring the converted model to life. 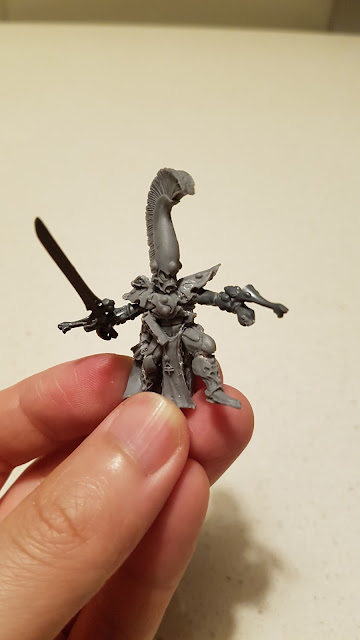 The finished base model. As shown in the earlier pictures, I cut up and re-posed the left leg to make it look more dynamic. The main posing idea was that Asurmen was standing on a raised area, shooting at onrushing enemies. 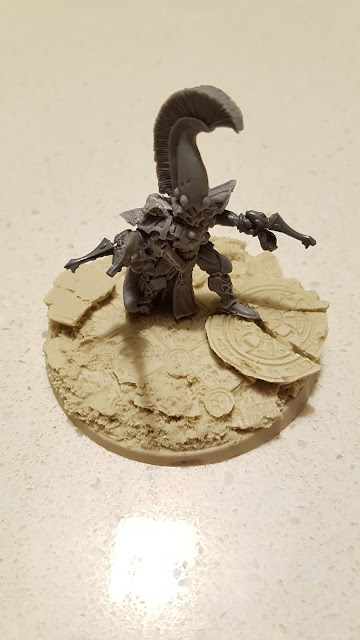 The model was placed on a wraithbone-ish looking base, as a test. After the conversion, I realised that Asurmen wouldn't fit on the standard 25mm base anymore, hence the larger base. Given that his rules involve providing a bubble buff to models near him, I may have to find a way to mark where the 25mm starts and stops for tournaments, or dismount him from the scenic base and put him on something a little more mundane. 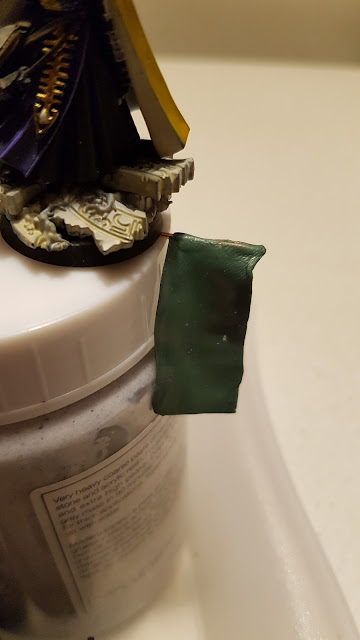 A cameo by Eldrad, who functions as a counterweight while my attempt at a greenstuff sashimono type banner dries. 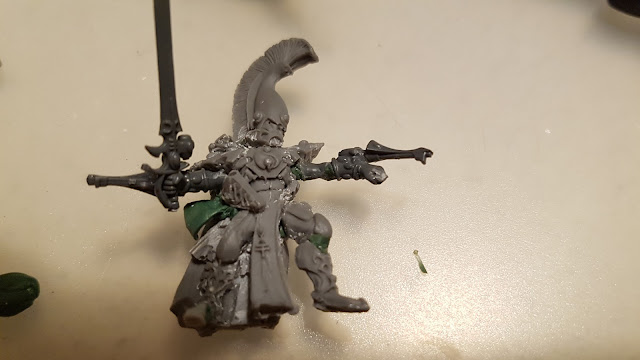 The nearly completed model, with gaps filled in with green stuff, and a little sash added to hide some rough edges. Pardon the resin dust. 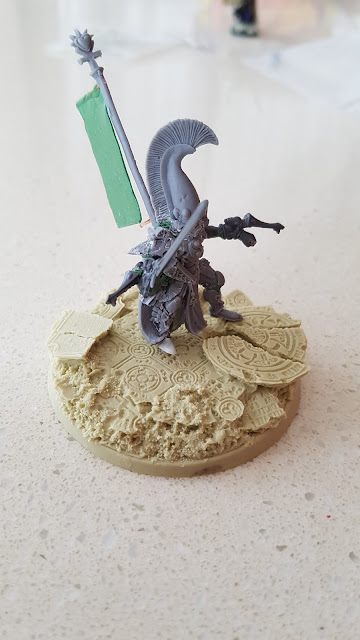 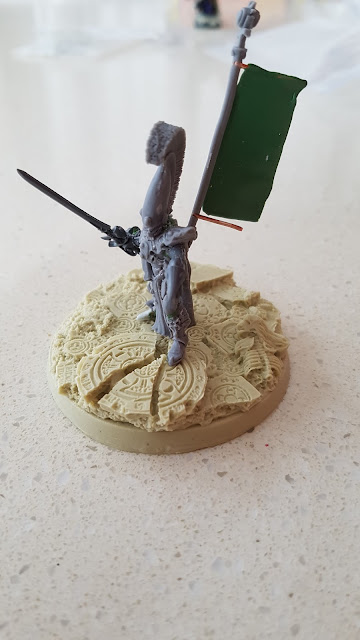 The back banner/sashimono was a bit too short for the pin, but i eventually got around it by removing/repositioning the bottom rod. These images are quite good illustrations of how a simple chop/reposition can help liven up an old model by making it more dynamic and 3D. 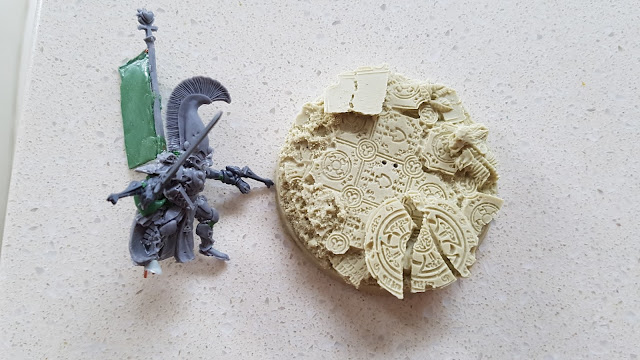 As I mentioned above, I needed to find a way to make the model more tournament legal, and I decided to try and make the model and base modular. The pins in Asurmen's base are long enough that they hold the model firmly on the scenic base, which means I may not need to glue him down, and can shift him to a 25mm base. Still needs testing though. The other alternative is to mark out the 25mm circle around him using dead enemies and hobby grass. Tempting tempting...

So, that's a quick journey through my second attempt at converting a model. Now to painting this guy!
Posted by Ripperling at 9:52:00 PM No comments: 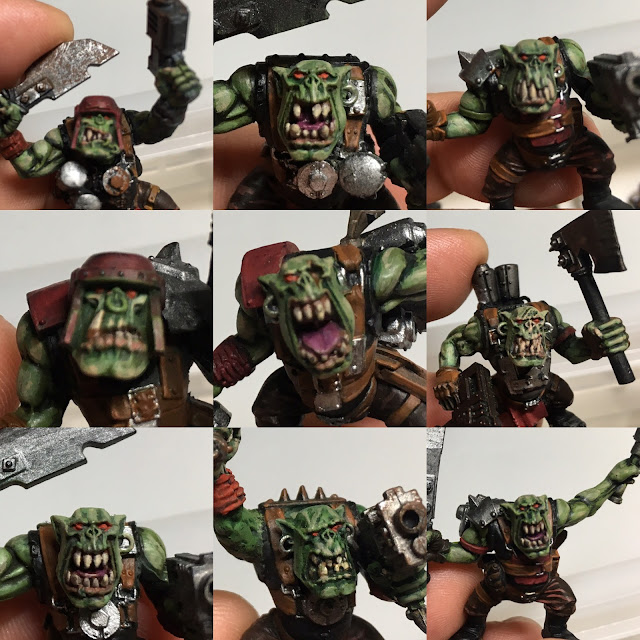 Wow its been a year! And what a year it has been! CSM getting a reboot in the first quarter, and then 8th ed drops for Warhammer 40k!

I was just sorting out my photo album, well primarily trying to find photos to keep or delete and I was surprised what I have painted this year.

List of personal goals accomplished
1.)     Buy something ugly on ebay cheap, repaint it, and resell it! 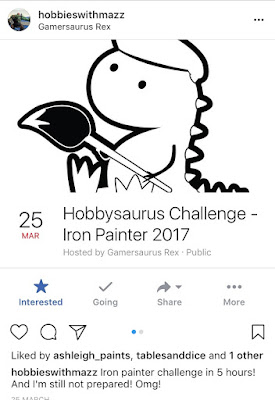 IronPainter was a 24 hour painting challenge,  where you have to paint something in 24hours and present it at our local hobby store later on.

I managed to chart my progress on instagram which is also another big thing for me this year, as the lazy blogger in me, just preferred to snap a photo and upload it. Plus all the instant 'likes' can be gratifying.

Search for me! im 'hobbieswithmazz' on IG


In hindsight it was really good fun, though the lack of sleep was really painful. and trying to solve a clogged airbrush at 3am was also another memory that I dont wish to repeat.

2017 was also a year for Netflix! My companion through all the long nights huddled infront of my wet pallet. 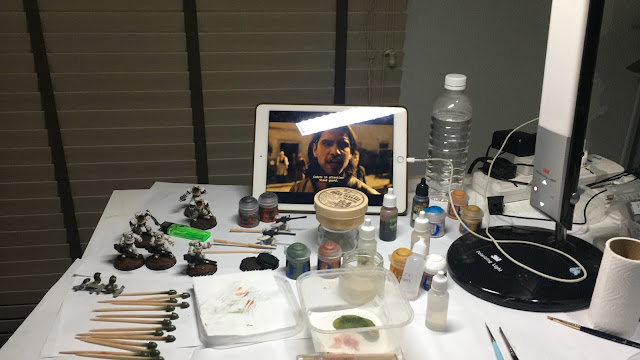 I think I have watched everything!

One of the few good offshoots from the IronPainter Challenge, was that I was inspired to paint and build faster. I have a habit of painting 40k minis in parts and then assemble them together, which takes just too long. At least for a few months, I was painting the models fully assembled.

I've since gone back to my old ways though =p

My Good Deed for the year!
2 weekends after the ironpainter challenge, Melvin invited me to join him in painting Andrew's Marines. Andrew's a friend of ours who has hoards of unpainted marines and we took it upon ourselves to help him reduce some of his backlog. Probably the most generous thing I have done this year! 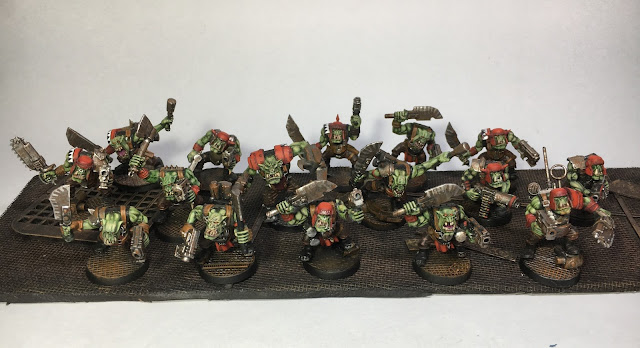 So I got off my butt and finished another group of orks. Figured in any list combination, I would be covered if i had at least 60+ boyz nicely painted ork boyz.


and so here rounding off the year is the mandatory family portrait... 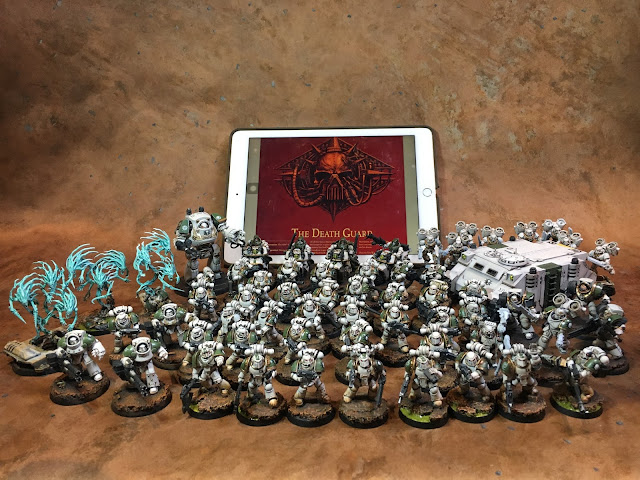 and the great waaargh just got more awesome too! 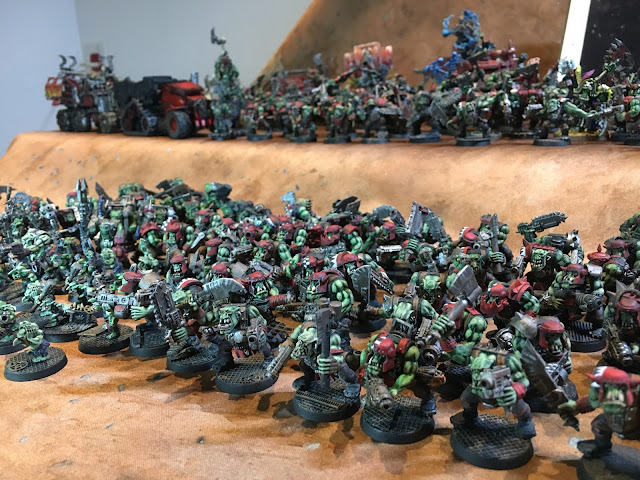 Just found some old pictures in my phone and thought I would share them with you guys!

Have gotten around to painting my Ashes and Dust for my Outcast faction. Really good fun putting this model and painting it. Here are some highlight photos from my journey!


Drybrushing always leave marks on the miniature if you're not careful so best to get it done first. You can always cover up those mistakes as you paint the actual model thus saving you time and effort. It's all about efficiency!


Here are some pretty pictures! I hope you like them! 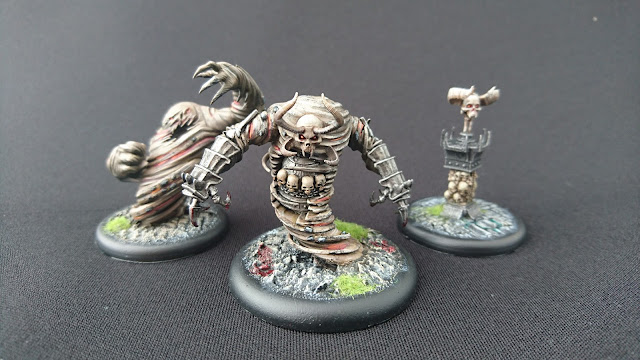 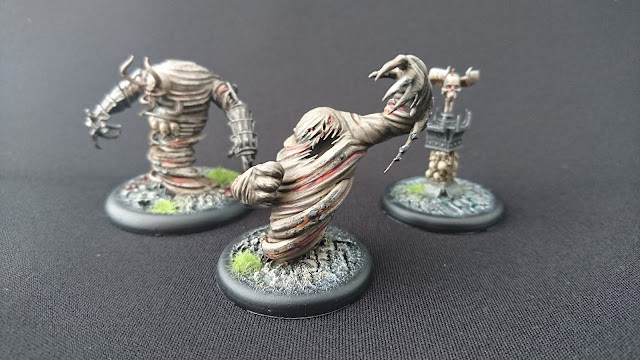 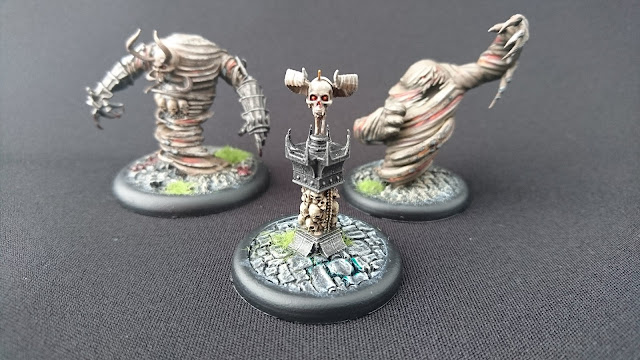 Gamersaurus Rex organized a newbie friendly event at 1000 points and I threw in my hat to support them.

Originally I had planned to bring another list which contained some Genestealers but ended up scrapping the idea when Leon thrashed me convincingly. Looked like that list needed more work so I brought the previous list that i brought to DP's Games Day.

Drew against Lum, also known as the Luminator who speaks in 3rd person. He brought a very skewed list that was more shooty with 3 Venerable Dreads, 2 units of Scouts and 2 characters.

We played the first mission from Chapter Approved which meant that mobility was key. Thankfully my list is very flexible, allowing me to deploy my Flyers all the way in his lines.

I managed to move into his table edge and razed all his objectives for 6 VP the first turn. Lum basically gave up after 2 turns. Ouch.

With some spare time, I went around gazing at other armies.


The painter is Wong Wai Liong and he paints really well. Add in his ability to convert, you've got a fantastic army!


Game 2
I played a newer player called Ling and he played Orks. Unfortunately for him, my army was really well adapted to deal with large numbers owing to the number of shots I can put out per turn. And in true form, I removed a large part of his army and he was rightfully shocked. Orks really need a new codex.

The best thing about this format was that it encouraged a very relaxed environment, people came prepared with efficient lists and all were painted. It was awesome to be surrounded with like minded hobbyist and I was really glad GREX put in the effort to run these events. I will definitely go down for the next one!
Posted by Anything But Ones at 6:19:00 PM No comments:

A bunch of us at ABO attended a recent Games Day that was organized by Leon and Dueller's Point. This was a 1000 point friendly event that encouraged efficient lists but not too spammy. Considering I haven't played too much 40k 8th Edition till this point, I went with something I was a little more familiar with.

Hive Fleet Leviathan
Game 1
I played against Renzus who brought a Chaos army with 2 units of Obliterators who were in reserve. However, having little experience playing the ITC ruleset, I was not aware that there was 2 Objectives, Primary and Secondary. While I was far ahead in the Primary, I lost the secondary. Eventually tying the game and we both walked away having a Draw in our record.

Game 2
Next game was with a Nicholas I think. He brought some Ultramarines without Guilliman. I remember he brought and deployed a large part of the Scouts up front to deny me from Deep Striking but left a gap on the one edge my Tyrant can get in. Once it did, it was basically a mop up. The Hive Guard also did remarkably well, taking out a tank per turn. Unfortunately, he gave up at the end of Turn 2, conceding 20-0.

Game 3
When the TO called out the next pair, I grinned. It was our very own Mark! He brought a massive army and it was a Horde vs Swarm. Going for Smite, I suspected that I needed to clear those Shamans out but he was in a massive ball surrounded by everything!

Mind is a bit hazy now but I do recall that I won the game by a small margin, something like 14 to 6.

I eventually placed Best Xenos General and got a $25 voucher for a fun day of gaming. All in, it was a great day!

I had also actually won Best Painted (by votes) but you can't win two awards so it went to Alan's Vostroyans.


Army Showcase
It was really nice to see people put effort into making their armies all nice and ready for the event. Here are some pictures!

I really enjoyed the event. 1000 points is a really good sweet spot as games can finish within 2 hours. Most games resolve at roughly 1.5 hours. Leon made a fantastic effort of printing out the scenario and everyone, I mean 4 copies of each army list for each player. The player pack was probably one of the best I have ever experienced. The only gripe is the terrain but considering this is a relatively new store, I feel that given time, DP can be quite a good store.
Posted by Anything But Ones at 5:47:00 PM No comments: