Patrick was preparing for the Annual GREX 3v3 Tournament last weekend and asked me for a game in preparation for the event. Unfortunately I could not put the Batrep up prior to the event to protect Pat's list from the participants.

I prepared my best list I was familiar with to bring battle to the previous Champion. Here is my list: 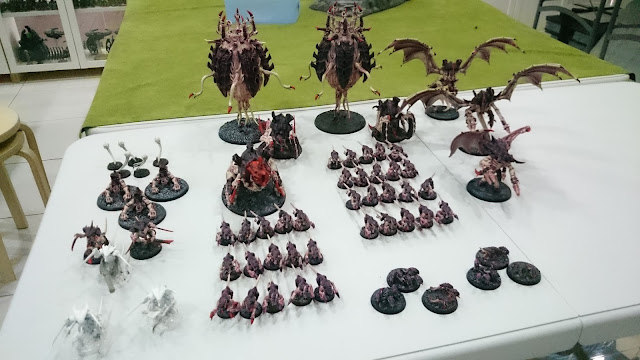 
It is worth noting a few things about Pat's list. The Hounds have 2 wounds each. They can also Scout in the first Turn allowing them to charge you in Turn 2. Very lethal. The Wraiths are supported closely by the Tomb Spyders which grant them a Reanimation of 4+ making them really hard to kill.

We rolled for the mission and got Cloak and Dagger. I did not Attempt to Seize the Initiative.

Wrong move because the Spyders have already done their job. Going after the Wraiths was wrong. I should have accepted that my LAN was dead and just gone for his Hounds instead. The other alternative according to Pat during post game was to Glide them instead and charge in Turn 2.

As I play the Tyranids, I realise that I fall into this fixed method of playing. I keep to tried and true tactics but this one comment Pat made really opened my mind. Why not Glide!

In hindsight, keeping my Gants off table was silly. I should have put them on the table to provide my LAN a screen and delay those Hounds and Wraiths.

Unfortunately, I had to go off at the start of Turn 4. And to be frank, the game was a forgone conclusion at this point. I had not manage to score any objectives and half my army was gone. Pat was ignoring my Flyrants and just went after the units capable to scoring points. Touche!

I will be booking in more time with Pat to help hone my Tyranids.
Posted by Anything But Ones at 8:26:00 AM