Marshall was really nice to pass me a pair of Dozer Blades since I prefer to have a fully WYSIWYG army. I decided to magnetize it for easier transportation.

Top tips: always use the drill bit that is the exact same size as your magnet to make it much easier for yourself.

It is the end of Month 2 for the Slowburn League at Titan Games and this time we had the opportunity to participate in a Games Day. This was held in conjunction with the Campus Game Fest held over at ITE Central. Starting at 12PM, we broke off into groups of 2. Owing to the size of the venue, each 2v2 grouping only had 4x4 play space. It was a little cramp but overall it turned out excellent.

Keeping the games simple, these were the rules we played to:

With 14 players, it meant 2 players had to duke it out as a 1v1 which turned out to be excellent. It created a scenario where you need to bring balanced lists!

Here are some pics of the event and some of the games I played in.

The first mission was Contact Lost, forcing us each to capture Objectives in order to generate more Tactical Objectives


After consolidating the results, YC (whom I have to thank for the excellent job of creating a powerful spreadsheet with Defeng to monitor the results) put us into our next pairs. I was teamed up with Tim and played against Alan (AGAIN!) and Marshall.

The second mission was The Spoils of War, where each side will "share" Secure Objective cards, effectively allowing you to "steal" the opponents' Tactical Objectives.

This game was extremely hard fought with the game going strong early. I have found a new hero in my list and he will be getting an Honour Roll for his armour. His name is Hiron and he will be promoted!

Brother Hiron's unit disembarked from his Drop Pod together with Sergeant Gorro. It was deep in enemy territory and he had a desperate mission. Gorro opened fire on the Chimera hidden behind the ruins and managed to take it out with his Combo Melta. Subsequently, the Guardsmen realised the threat and opened up on the unit, taking everyone out except for Hiron. Brother Hiron threw himself through the wall, punching through the broken door and came face to face with the enemy Warlord. Picking himself up, he fired with his Bolt Pistol and let out a resounding shout to the Emperor and charged right in. Sanguinus was with him that day. He struck true and felled a Guardsmen. The enemy was caught surprised by the moment and having seen what the embodiment of the Emperor could do, quaked in their pants. The enemy Warlord would have no more of this and fled the battlefield. Brother Hiron picked himself up, leaped up to take cover in the ruins. Mission was a success.

Brother Hiron's actions managed to secure the Tactical Objective twice and scored my team 3VPs for Slaying the Warlord. A true hero.

After tabulating the scores, the top scoring players were Tze Min and Edward. Tze Min came out as numero uno due to VP scores while Edward came in 2nd. Marshall came in 3rd.

It was an awesome day. Not only we managed to play with different people, but the hall was full of other gaming goodness. I hope you guys all felt the same way too!

750 points for next month! I will be working my lists to play at the 1000 point Games Day we will be running at the end of Month 4 so stay tuned!
Posted by Anything But Ones at 7:03:00 PM No comments:

To the bitter end of turn 6

I realised I tend to lose momentum during my games.

And yesterday's game with JYang's harlies was yet another exercise to building up patience and resilience to fight on to the bitter end. By the end of turn 6, I was left with just 4 orks on the table! 1 small blast template short of being tabled! Yet another hard fought battle with the harlies.

The game ended with the orks leading in points. However in the final turn, the harles had a chance to steal the game if they could table my remaining 6 orks. In a risky gamble the Jetbikes charged the orks but were hurt by the overwatch. (Mental note: after 2 games of Wolf boys and now harlies charging into my boyz, I have to hide a flamer somewhere in among them.)

The void weavers too closed in for the kill, killing 2 boyz in their shooting. But the boyz chanted 'ere we go!' and got a re-roll on their charge and managed to charge into the first void weaver, glancing on 6s before the warbosses power klaw ripped a hole into the hull despite the invul save of the void weaver.

Next month's battle at 750 points, I expect to see even more Harlie nastiness being brought on. 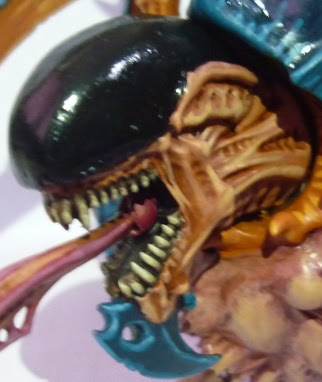 Not much hobbying done of late due to being under the weather. Just recovering from a small bout of Nurgle's "blessings". Good thing there are no mutations haha! But no Feel no Pain either. Decided to get back in the painting saddle with my Tervigon. This will be for the Slow Burn League. 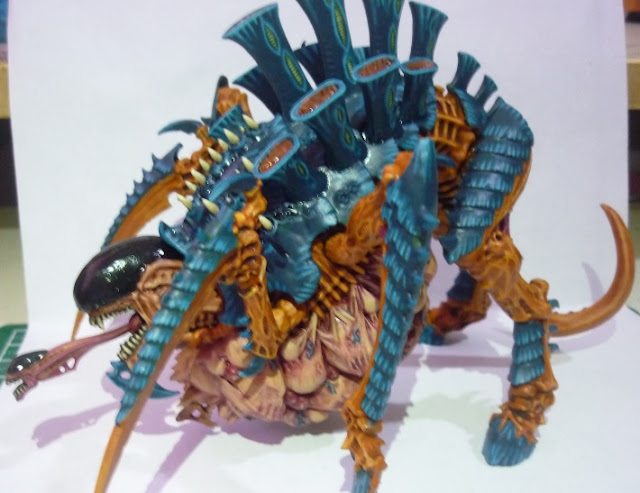 She helped me decide on the final carapace color for my Nids. I decided to go for a bluish turquoise shell for my army. I used Stegadon Blue for the base, followed by Sotek Green for highlights. The extreme highlights were done using Temple Guard Blue. 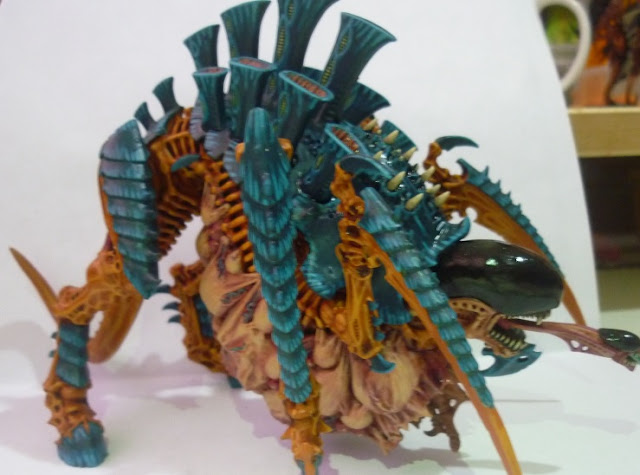 I have not stuck her on the oval base yet because I'm applying some sand and flock to make it complete. 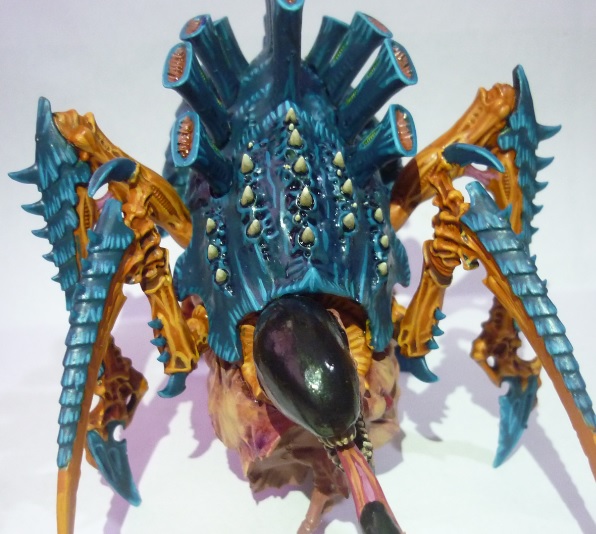 I used the main colors of flesh, orange and blue the creature. The accent colors were some bleach bone on the cluster spines. 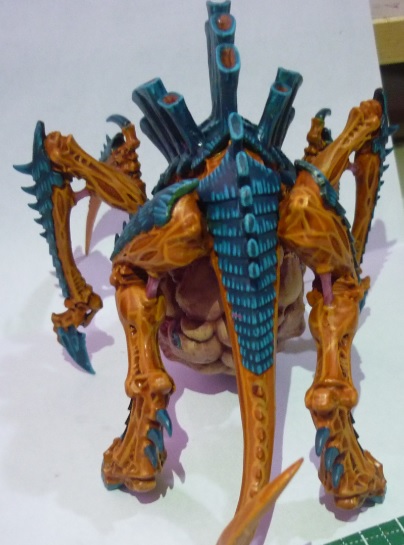 I'm happy with how she turned out. Also got a small 500 point game in with my Tyranids. It was a loss as I had not much to deal with armor, and she went up against the legendary Legion Sicaran tank to boot! But the Tervigon did manage to secure First Blood and Slay the Warlord.

It was a fun game and I look forward to having more battles with them. I keep rooting for my opponent as I love to see bugs getting mowed down lol! Its a strange dichotomy :)

I'm being distracted after painting my Tervigon, and am assembling some Mantic Corporation Marines.

And on that note, I wish everyone a great rest of the week!

Ok its month 2 for the slow burn and unlike last month’s fortuitous alignment of the sun and moon where the long weekend fell inline with Mrs Big Mek own personal schedule, leaving me with ample time to build and paint uninterrupted. Such was not the case this month of June, where between I was stuck on which way forward to build an army list and the warboss at work, meant many nights just ebbed away.

I finally managed to find the highly recommended RJ International matt black spray for priming, and I did a comparison between the new Nippon Spray that I used the month before. I’ll share my findings in a later post.

This month’s boyz have the beginnings of steampunk theme on their bases. 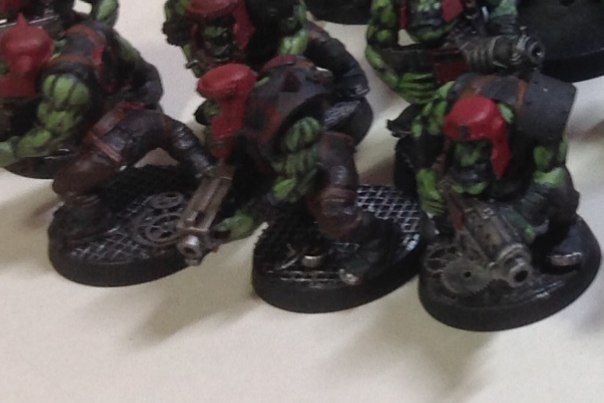 I managed to squeeze in 2 games over the last 2 nights, thanks J.Yang’s Harlies and T.Dor’s Wolves! Unfortunately, the machinegod(s?) in my iphone seem to have fled, leaving the camera lifeless during these 2 games.

I managed to learn abit on the importance of target priority and a general refreshing of 40K rules.
No miracles with grot shooting today. Though it would have been hilarious. Instead the Harlies made sure early on that the grots were cleanly removed from the table.
In both games, I have found a new fear of exploding mysterious objectives. Badrux bears a few new scars from them.