So this was the first SSU game for me. Managed to rope in Jyue for a 250AP game. I played my usual 250AP list.

I had no idea going in what to expect so I deployed conservatively. I hid most of my close combat stuff in my right flank as the containers gave them a lot of hiding space. Other than that, I deployed my Ludwig in the most centre position to threaten both his walkers. Held the left flank with my Flak Grenadiers.


At game end I took 8KPs and Jyue managed to take 4KPs from me. An interesting game with a totally different dynamic since SSU utilised more bodies than the Axis or Allies. A good learning experience.
Posted by Anything But Ones at 10:39:00 AM No comments: 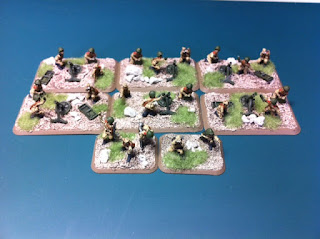 Just a quick post up of more painted Russians. Next up is gonna be a huge Late War Strelkovy infantry horde.
Posted by Beef Nuggets at 1:58:00 PM No comments:

Took a few photos of where my Dust Army now stands. The lighting was pretty bad but I have only 2 more units to paint.

The Battle Grenadiers and the Heinrich 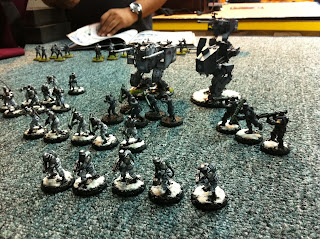 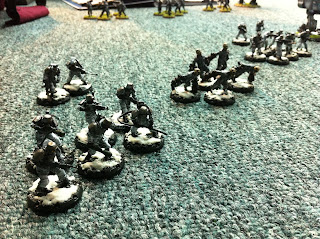 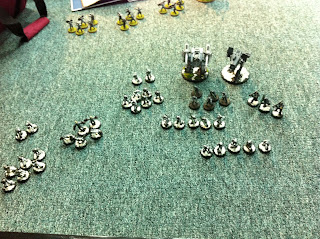 Just came back from a long holiday over in Jordan so was itching to play a game of Dust. Our usual Monday group seem to have chilled a little so I had to squeeze some time out of one of the regulars instead on Wednesday.

Abdullah fielded his Germans this time and man it was a nail biting game. I'll let the pics do most of the talking.
Used this list yesterday. I am planning to use this list until I am familiar with it's ins and outs.

My plan was to snipe away his unit of apes so I chose to deploy using the refused flank method, forcing him to walk the field so I can get more shooting in.


This is the closest game I've played so far. Either Abdullah knows this army better, suits his playstyle better otherwise the Germans are just a stronger list with longer ranges and more tactical options.

Gotta get more games in to find out.

I am hoping to get a 150AP game next week either with Abdullah, Jyue or Nigel who is a new player.
Posted by Anything But Ones at 2:19:00 PM No comments: