My storm eagle project has been on hold for a couple of months. I think at that time, I wanted my conversion to be all encompassing filling the roles of both storm raven and storm eagle. After studying the design of the thunder hawk, I wanted my storm eagle to derive of the same design as much as possible. Obviously the hull has been extended to match the forgeworld version. Since the air intake has been moved towards the rear, I used the forgeworld Damocles pattern rhino’s top hatch/sensors to bridge in the gap. I’ve always thought the servitor mounted turret from the storm raven made the flyer appear a bit bulbous for my liking. The boom of the aircraft has been placed on top of the rear hull to connect the profile lines of the vengeance missile launcher. The main wings have also been reversed to give it a sleeker feel. The lascannons from my storm talons have been modified to fit into the missile housings from the original storm raven kit. Also, the front wings under the cockpit have been added to mimic those found on the thunder hawk predecessor. The front light housings have been left unassembled as those will be embedded with LED’s. All major structural mods have been done. I will continue to add dark angels details and bling as I paint. The storm eagle was base coated black followed by an airbrushed layer of hull red as a foundation tone. Bleached bone was then airbrushed on top as the mid-tone. Panel lines were than picked out with devlan mud wash. I will proceed with highlights, other primary colors and battle damage soon. Thanks for viewing guys! 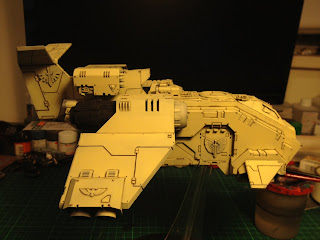 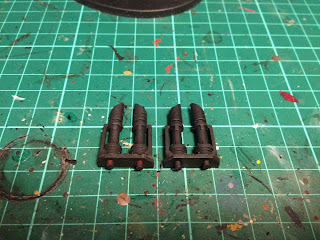 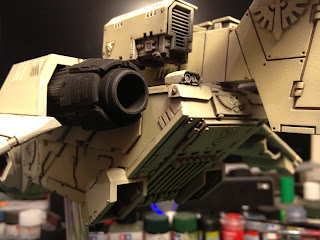 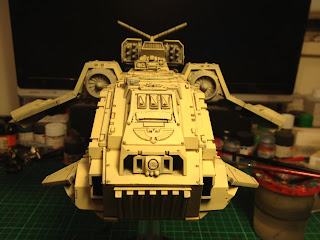 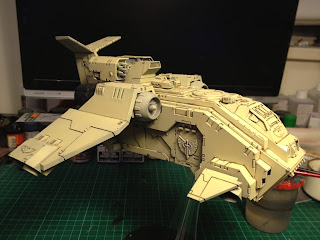 First game at 250AP. Was planning to pick up my extra box of Snipers and Battle Grenadiers for this game but PI ran out of Battle Grenadiers. Probably have something to do with the discounts going on at the store.

To help with list building I use a fantastic web-based army builder created by one of the players. Can be found here: http://dust.mainecoon.net/

This is the list I created for my first 250. It's all about balanced and tactical flexibility.

From a model standpoint it allowed me to use my existing collection of minis without breaking the bank. The trick is learning how to use my assault platoon now in the form of the zombies.


I did toy with the idea of bringing a Heavy Walker myself. I love the model but I felt at 250 I would be limiting myself tremendously in tactics. Also, I painted my nice Ludwig!


Jyue was there so checked the rulebook to clarify if his tank counted as capturing both objectives. This I quote:

Interesting rules question turned up in the Raymond vs. Shum game today. Essentially, because Shum's Heavy Walker is so big, it straddled the 4" gap between two terrain objectives, and the question was whether both are taken by Shum.

With regards to Key Position taking, no; rules very clear that it has to be a _Soldier_ unit taking the key position.
The second question is whether a unit transported within the Heavy Walker can take the Key Position. From what I can read, Carried Units are removed from table, so at the current moment I think the answer is no, cannot take Key Position.

So it looked like I won the game 2-0. 3-0 if you counted my Battle Grenadiers being in contact with the impassable aquarium forest.

A great game nonetheless and this just went on to pique my suspicions that at 250AP you will struggle to execute plans with a Heavy Walker soaking nearly 1/3 of your point allocation.

Need to get in more games with the rest of the boys to confirm this. Keep checking back!
Posted by Anything But Ones at 3:29:00 PM No comments: 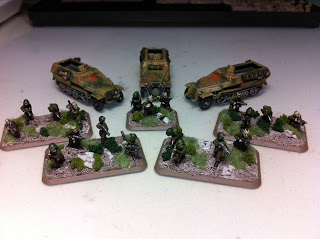 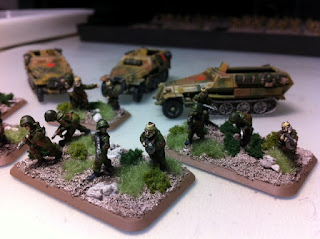 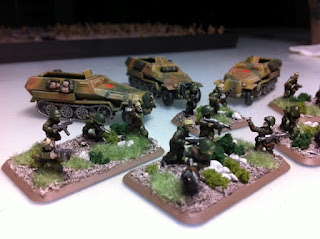 I'm in a FOW painting Mood recently so I spent some more time painting up more soviet infantry.

This time I focused on the soviet Spetsnaz platoon. They are the most elite warriors within the Red army. Think of it as the SAS special squad of Russia. Only with even more tenacity!

And more importantly they are a recon unit, and in my tank army they will be able to make a free 16" move as well as pull along another tank unit with them. This effectively gives that one extra tank unit an additional 16" deployment. Very vital especially in Version 3 Flames of War where the soviet tanks are seriously nerfed with the new "Hens & Chicks" rule.

And yes, the platoon moves around in captured German Halftracks. Making them move around undetected. Sneaky bastards indeed!
Posted by Beef Nuggets at 9:07:00 PM No comments:

Painted up more SMG Russians for flames of war. 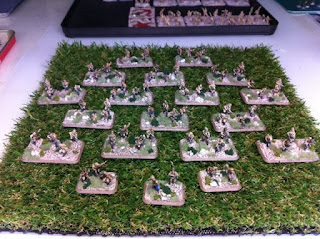 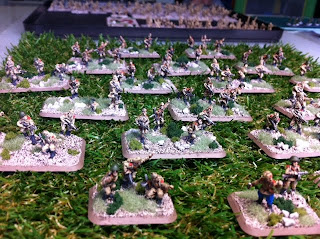 Been using unpainted infantry stands in the past few months of gaming and it certainly did not feel proper!

Finally got time to finish up the important SMG infantry to use as my Tank Rider Company.
Posted by Beef Nuggets at 2:59:00 PM No comments:

I love my life. Had a 200AP game with Abdullah on Monday at PI Midpoint for our regular Dust Warfare night. Did not change my list so kept to the original 200AP.

Caveat: The following battle took place with too little terrain. The 25% that FFG suggested is a requirement as Axis excels at killing from range without cover. We played with about 15% of the table.

I am getting quite a strong hand on this game. Germans have strong command over the range game and whittling Allies out early is the right strategy. However once they close in, you will need to have something to counterpunch. I have another list in mind with some Zombies. Will give it a try next week.
Posted by Anything But Ones at 9:00:00 AM No comments:

This is not the usual batrep that I usually do. I was itching to play the new 40k with my Tyranids and Abdullah was keen too so we took 1750 each and put together our armies. We spent quite a lot of time looking at the rulebook to check on the rule changes. I used my SporeCon2011 list to keep it simple while Abdullah used his usual list.

So without knowing what to expect, here is the report.

Rolled on missions and we got 5 Objectives and side ways deployment.


We had to call the game here because Abdullah had to go for a movie and I had to pack for dinner. Still was a good intro for me to get back into the game. I need to read up on the new rules to also help make games quicker. Look for more to come!
Posted by Anything But Ones at 10:18:00 AM 4 comments: