Managed to get a game of Henchman Hardcore with the missus today. I put two lists together (based on beating face as my priority).


Hilarious when both my wife and I drew Black Jokers in a simple melee duel.

She's actually making a list now based on the models I have. I wonder what she's scheming.
Posted by Anything But Ones at 2:28:00 PM No comments:

In preparation of our local Henchman Hardcore, I got in 2 games with Patrick on one of the weeknights. Put together a list I thought would hit hard. Comprised the following:

Unfortunately, they did not perform particularly well and I lost both games to Patrick. I felt that Alyce just didn't cut the mustard. I did however fall into the trap of trying to kill Aonious and ignored the threat which was Bishop to my chagrin.

Going home, I then mustered a new list. One that was based around an old favourite of mine.

These 4 would now form a new team for the coming tournament.


Until a Red Joker called his Red Joker and I managed to give Nekima Visions of the Void, forcing her to be Paralysed thus winning me the game. It was a 6-3 victory at the end of 45 mins.


Today marks a great day as YC, Sam and Defeng first made their appearance! I have been cajoling them to play for the longest time and am so glad to see them make it in this 10 player event. All 3 unfortunately are not too familiar with the rules so we had to help them every couple of minutes but I didn't mind, as long as they were enjoying the game.

In my second game, I was matched up with Derek. Funnily enough it was like my list was built to counter his list. He brought Baby Kade, Candy and 2 other Minions that I can't remember.

My card draws were really in my favour and my initial hand was unbelievable, basically it was a Royal Flush - allowing me to win nearly every duel. Also, it's funny because he insists on cutting my deck every game. LOL!

I was then paired up with Eugene, a regular and adept player. He was also very familiar with my list making this a tougher game.

My final game was with Keith, a regular player known for his good lists, good play but SLOW play. Not that he does it deliberately but he does deliberate sometimes too long.

Toshiro and Necropunks was able to hammer the hell out of Hannah and losing her on the last turn meant the point swung to Keith. I ended losing 3-6.

With 2 wins, 1 draw and 1 loss, I ended up finishing no. 3. I was poised to take number one too! Ahh well, Welcome to Malifaux. LOL!

I managed to pull Johanna, a model that I have been hunting for a long time now for my all female crew. I ended up being a happy camper and managed to add two more Scripts to my collection. Still waiting for Wyrd to release better models than the current collection of plastic 1st sculpts.
Posted by Anything But Ones at 5:46:00 PM No comments:

A Short Story - For the Emperor 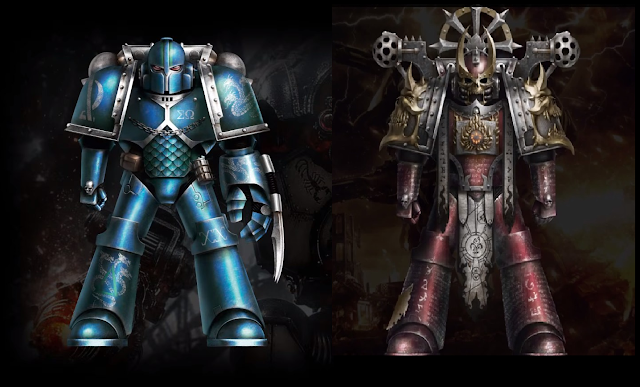 Zardakk Kull removed his helm, taking a breath of the corridor’s air. It smelt of blood and expended ammunition. Licking the sharpened points of his teeth, he watched as his erstwhile allies picked their way through the wreckage of the battle, silencing survivors and collecting unused ammunition. In the ruddy emergency lighting of the corridor, the metallic blue armour of his allies looked almost indigo, while his blood red armour simply appeared darker.
Read More >>
Posted by Ripperling at 2:27:00 PM No comments:

I guess some of you out there may have bitten by the Bloodbowl bug. I have gone full tilt and bought into it. I first fell in love wi the game in 2001 at the end of 2nd Edition. Fast forward to today and an updated set of minis and beautifully produced board, I was hooked. I present to you my 1mil gold pieces team.

Just a few layers of highlights were missing and of course the grass.


I drew the game and levelled the Ogre up! Gave him Stand Firm and headed out for my next game with Zim. He played High Elves and man, I lost that game 2-1.

Thankfully, I won some experience points for my Linemen and No. 2 which I called Butterfingers levelled up. He now has Dodge! Unfortunately I forgot to take a picture of that game.


Managed to then tee up a game with Weijia's Skaven called Failed Experiments. Those rats run fast! Lost the game again, this time 2-1. Sigh...maybe I'm not very good at this game. Ah well, at least I am having fun.


The team as it now stands is as follows:


Still a few more bits to do with their faces, a stripe here and there to detail the players but they are 90% complete. I'll add detail when they level up

Armies on Show at the 2v2 Tournament

Nothing quite replaces the spectacle of beautifully painted armies slugging it out on beautiful tables. There were some really good looking armies out there and I am sure was surprised at the quality of the work that some of these artists were churning out. I hope you will agree too! 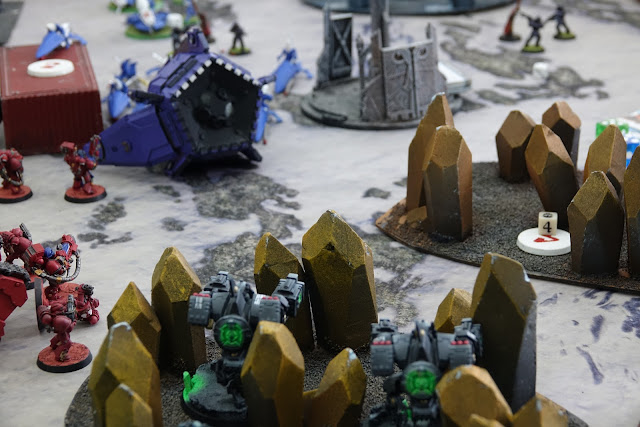