Well its that time of the year again where I will talk about what happened this year and what I want to do the next. So sit back and enjoy the read. Wall of text (and nice pictures!) alert.

This year has been an intense year of wargaming happenings. Loads of cool kick-starters finally materialising and being shipped to gamers. Crazy amounts of GW releases in terms of models and codexes and online supplements. The quality of the models are so high I honestly think GW are truly in a league of their own now. And they couldn't be doing any better. We truly are living in a Golden age of wargaming, at least for 40K in my opinion.

While I have always been struggling to get any real gaming going on for 40k (as I have been for so many years) this did not stop me from buying and starting new armies! However like many the initial impetus to buy and build and start and army dies down after the first couple of painted models, something which I really want to address in next years hobby resolutions.

Let's start with a little year in review and recap.

I did a Necron army, and used my airbrush to help me speed things up. Although it isn't complete I have done almost 60% of the hard work and it shall be finished come 2014. 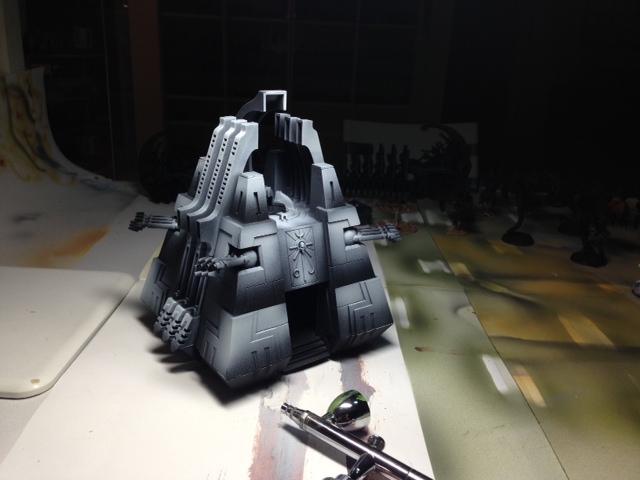 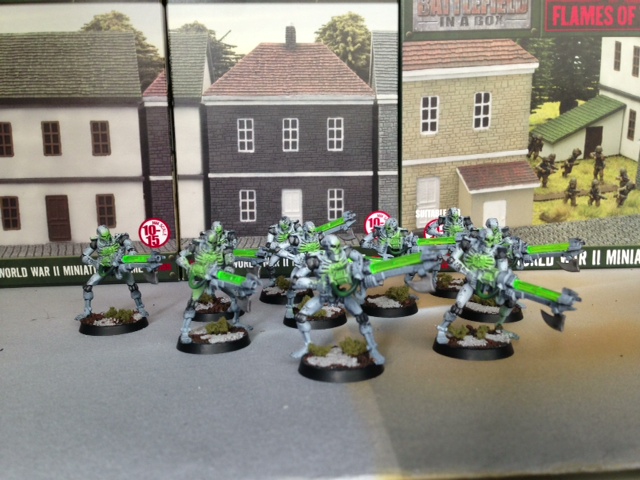 Also when the new Space Marine codex got released for 6th Edition I thought it was the perfect excuse for me to finally do up my Ultramarines army that I have been yearning to do for so many years (which self respecting 40K fanboy wouldn't have dreamt of doing an Ultramarine army sometime in their lives?).

So I went ahead to purchase lots of new models and fixed them up. Unfortunately I only got one painted test model. And the remaining army of approximately 3000pts is still sitting in grey plastic. 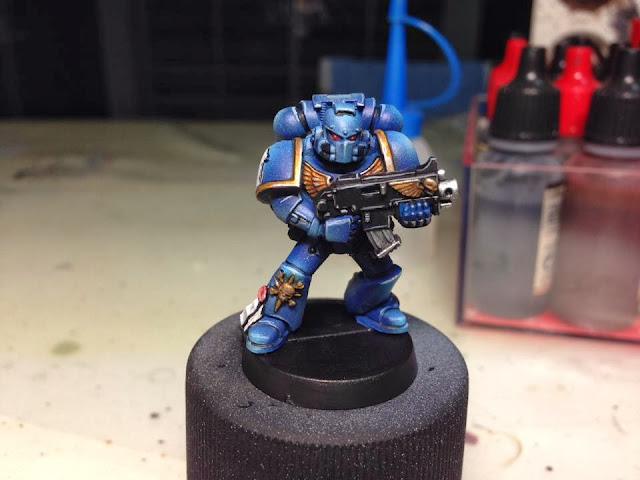 2013, the year where I actually got more gaming in than I ever had in the 16 years of collecting and painting little plastic/lead men. Those who know me know that I've always been leaning towards the modelling/painting aspects of the hobby rather than gaming itself.

And the game that I've been so eagerly playing? Flames of war. That's right, I've always been a GW fanboy from the start (Heck I was even working in Games-workshop for some time!) and here I am finding myself so emerged in a gaming system that isn't Fantasy/40K. I can't speak enough of how much fun I actually get when playing FOW, be it the relaxed atmosphere that is probably due to the combination of game balance, flow and player demographic. So those who have not given FOW a shot before, I wholeheartedly recommend giving it a try. You'll be pleasantly surprised.

Here you can see a Total-War multiplayer game in progress. 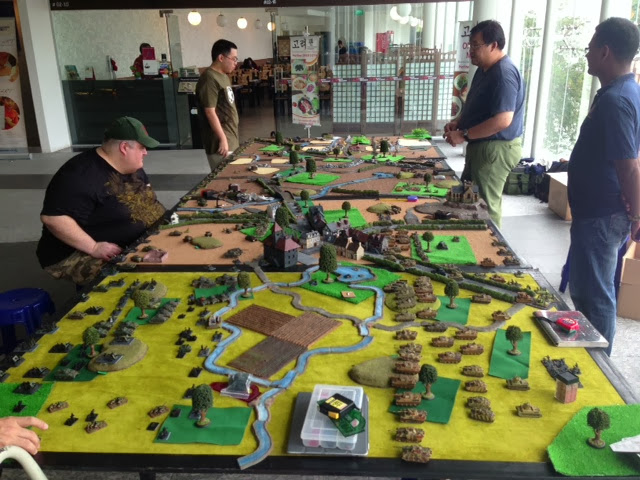 A lot of my hobby time this year was also spent on terrain, mainly 15mm scale terrain for FOW. I know am proud to say I have enough terrain to densely fill up two full sized 6 x 4" tables to play in my own home! And those who play FOW know how much terrain plays a vital role in the game! Visually stunning tables are a war gamers dream, and I have done it!

Here you can see my two tables set up for Flames of war in my home. 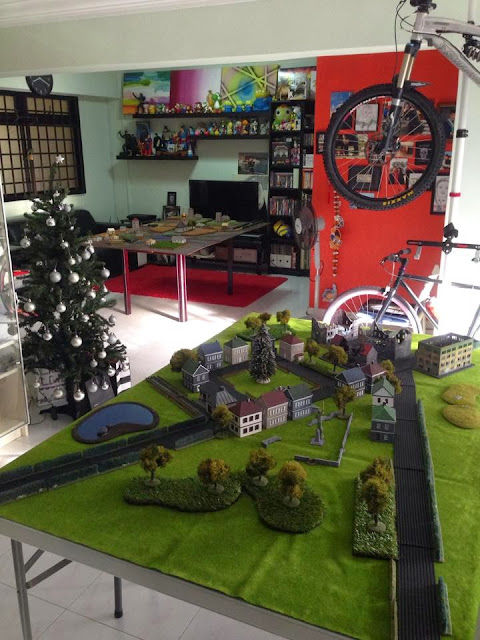 Another army I started and finished (woohoo surprise!) this year was an Isreali tank army for the newly released Flames of War games set in a different era from World War 2. This was set in 1967 when the Arab World joined forces in an attempt to wipe Isreal from the map of the world. This was the Arab-Isreali War of 1967.

The models are absolutely lovely and I painted all 20 Tanks in one go. Took me about 2 weeks. 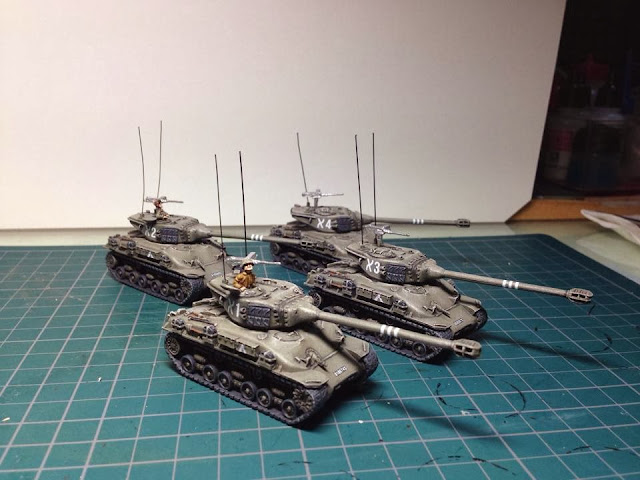 Onto other gaming I have also been playing quite a lot of Zombicide. Both with my gaming pals and my wife! Which is a great bonus as we get to spend more quality time with each other. And with the second season of Zombicide shipped I know have a metric load of zombies and new scenarios to play with! Only problem is getting them all painted up! But that's something which unfortunately is not something I can see happening anytime soon. There's just too much other stuff in the painting queue. 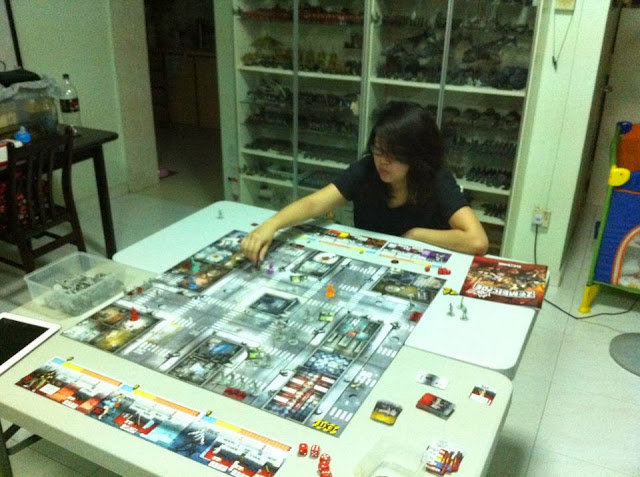 Another awesome Kickstarter that happened this year is undoubtedly Mantic's Deadzone. Touted as Mantic's answer to GW's defunct Necromunda game. This game garnered an unprecedented amount of interest. Needless to say I was too.

The models are honestly nothing fantastic compared to GW's offerings but I'm not done yet. The magic in this game is the terrain system they have. Modular, plastic, cheap as hell. I repeat. CHEAP. and they are beautiful to boot! I will be trying my hands into the Deadzone ruleset but my main purpose for this kickstarter was for the terrain.

These are definitely going to see action in my 40k games (another new year resolution) and of course the recently released but so much potential and fun ruleset for Kill Team! More on Kill Team as I talk about 2014.

Here you can see my finished Deadzone terrain. I went to work immediately when it arrived. And spammed my airbrush to aid in the speeding up of the painting process. What you see below is just 1/4 of the total amount of terrain I got from the Deadzone Kickstarter. All for just $150usd. I'll say it again, CHEAP. 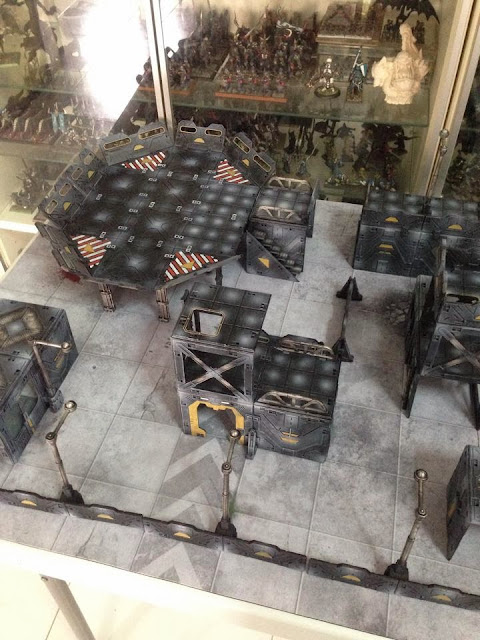 Alright that's about it for the 2013 side of things now let's jump straight into what's happening for 2014.


Ok let me elaborate a little, although I know everyone's wish is to play and paint more, the realities of life has this ability to take all our time away. So that's why I want to pen this down so that I can have something to refer to and hopefully commit to the best of my ability! One big event that is happening in 2014 is the arrival of my second child. So that is definitely going to sake things up a little!

PAINT MORE
This may sound pretty obvious but hear me out. I have been painting quite a bit this year, however I am spending most of it painting terrain, not miniatures. Thus I want to make it a point to paint more miniatures now that I have already done so much terrain to game with.

What's in the painting queue then?

Firstly I want to finish up my Russian Army for Flames of War, I already have 70% of my stuff painted (all 5000pts worth of them) and I think the final push to round up the painting for them is definitely do-able.

Next up is to finish up my Necron army, like I mentioned they too are in a good state of progress so finishing them is not an uphill task. Which I would really want to do as I love the colour scheme I did for them.

Then I want to actually get round to painting my Ultramarines. Notice I say get round to, this is because I know realistically that I would probably A) lose my painting interest as they are totally unpainted thus meaning craploads of painting to be done B) not enough time. It'll probably be a combination of both but I want to at least try.

Finally I want to start keeping track of painted miniatures again like I did for 2012 as I realised that without one this year in 2013, my painting production is really lacking as I did not give/set myself a target to work towards. Looking back I painted so much stuff in 2012 it was scary. I can't remember the exact number but it amounted to almost 300. That's like about a miniature everyday. Wicked.

PLAY MORE 40K
We are living in a Golden age. Beautiful plastic models, blistering releases for codexes to keep armies up to date. An edition that got me more interested in the game than in the past 4 editions I've been involved in. I want to play. Nuff said. Problem is juggling real life constraints and arrangements with gaming buddies as everyone's busy.

BUY LESS MINIATURES
Haven't we all heard this before? And we still end up spending without even looking at the receipt when the plastic crack calls out to us. With a second child looming on the horizon hopefully I can restraint myself a little more. Although I know it's probably going to be futile......

PLAY MORE FLAMES OF WAR
This may sound strange seeing that I have already mentioned I've been playing a lot of FOW. Well this is just a remainder to myself that although I want to try playing more 40K in 2014, I need to maintain my regular playing group together or else things slip into the cracks easily and I may find myself falling out of it.

BLOG MORE
Last but not least I need to make myself blog more. Looking back my blog count has dropped tremendously this year and that's not something I want to see continue to spiral into oblivion.

I haven't been slacking off documenting stuff, in fact I've been doing tons. Problem is that they are all in other channels other than here on the blog. Instagram, Facebook groups, twitter etc. I admit that's the easy and lazy way out. And I'm more guilty of that than ever. So here I am pledging to doing it more in 2014.

If you have followed me thus far I must offer my sincere gratitude for your interest and time. And let me wish you a great hobby year ahead for 2014. Cheers!
Posted by Beef Nuggets at 11:31:00 PM 2 comments:

Was invited to a game yesterday at our LGS. Marshall got me to play before I head off for the Christmas holidays. Ironically, I ended up playing with another chap named Su Jin, but I will call him Jin for short.

My opponent brought an interesting Space Marine list with a few key items:
2 Techmarines to bolster defences for 2 major ruins which played a huge part in keeping a lot of his units alive
1 large death star with Medic and a few assorted minions
Thunderfire cannon
3 Librarians which all brought along Prescience - technically he rolled for other spells but defaulted to it

The rest are in the pictures so you'll see them!

My Farseer took the powers: Guide, Prescience and Executioner

Night Fight was rolled and it was in effect Turn 1. I won the roll off and chose to go first

Jin managed to secure his objective. Turn 6 gave him the point he needed to draw the game!


I managed to score Line Breaker

This was one of the few games that I will remember for a long time. Starting with the game, I didn't know what I was actually knowing. I spent the first 2 turns flipping the book and Jin was nice enough to let me refer. I will be doing my homework for the next game. Then I saw this unit right at the front of his army, I took the bait and went all out on it, destroying and netting me some good early points. It put Jin on the back foot allowing me to move where I pleased. I thought I had the game in the bag until I realised how difficult it was to dig them out of the reinforced ruins. Shot after shot, they survived. In hindsight, I would have used the Serpents to further wither them down and force them to move out of the terrain. The Spiders just didn't have the hitting power compared to shooting. Close Combat should really be the last option for this army.

That being said, I enjoyed every minute of the game and am looking forward to the next one.
Posted by Anything But Ones at 2:25:00 PM 1 comment: