Battle of the warbosses!


In one of the more interesting games that I've had in a while. AlexH brought his ork horde down! Battle of warbosses!

It was a 1000point battle, and he deployed his boyz first.
On his left flank he had 1 fire base of 3 mek guns, and 1 trukk full of boyz.
On his right flank he had another fire base of 10 flashgitz also guarded by a trukk of boyz.
And in the middle, the baddest group of meganobs with his warboss.
I brought my warboss Morgutz-Ear and his retinue of painboy & 18 boyz,


And thus began the battle of the baddest warboss.

Warboss Ahu-Ang heard from his grots that rival warboss Morgutz Ear was boasting that though he had lost his warband in a furious battle with corn damons (2v2 at ITE), but had killed that soulgrinder in combat and was the baddest meanest on planet Shechem. Warboss Ahu-Ang would not have any of it and gathered up his bully boyz of mega armored nobz and rode out to the hive city ruins to have a 'word' with Morgutz Ear about who's the baddest.


Turn 1 was quick, with Alex drawing objectives cards for the objective right in front of him.
Both sides closed in, though I drew crappy objectives, 'to slay his warlord' and 'to capture the objective' that his warlord was sitting on! 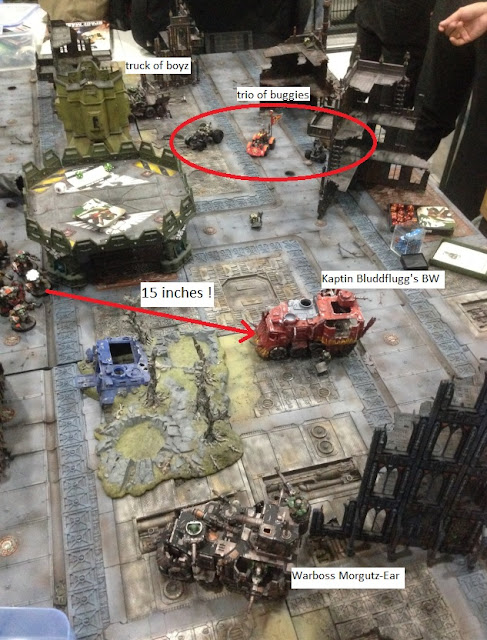 Turn 2, horror dawned on me when I realised that I had moved the battlewagon into charging distance of the meganobs, surely Alex wouldn’t try to charge into it….

Warboss Morgutz Ear screamed for his boyz to move forward. "Another rival warboss on this planet?" He was surprised, no matter, a fight is a fight. And he wasn't one to turn it down.


Leading his other battlewagon was Kaptin Bludfugg, a freebooterz mercenary, whom he had promised many good fights and lots of nice hats to choose from. In exchange for a ride on his koozer to the Space Hulk in high orbit above planet Shechem, once he had gathered the necessary spares.


However, the space Kaptin might have been better suited boarding a space hulk and had moved his battlewagon abit too close to the group of meganobz...

The battlewagon exploded killing half of the boyz on board. Morgutz seeing the drama unfold, smashed the nearest grot next to him and sighed.

On the other side of the battlefield, the mek guns continued to get hot with 1 blowing up, but also landed 2 lucky shots on the trukk. Leaving 1 hull point left.

In the subsequent turns, Morgutz moved his Battlewagon closer to the flashgitz gun line while the other trukk disembarked the boyz fearing that with 1 hull point left, the other trukk might be in risk of exploding too.
Alex in a move, that reminded me of something Colonel Marrick would do, he moved his empty trukk between my battlewagon and his flashgitz.

Warboss Morgutz Ear was undetered and ordered his Battlewagon to speed up and ram the trukk, blowing it up! Leaving a 'fireball of flaming goodness'. 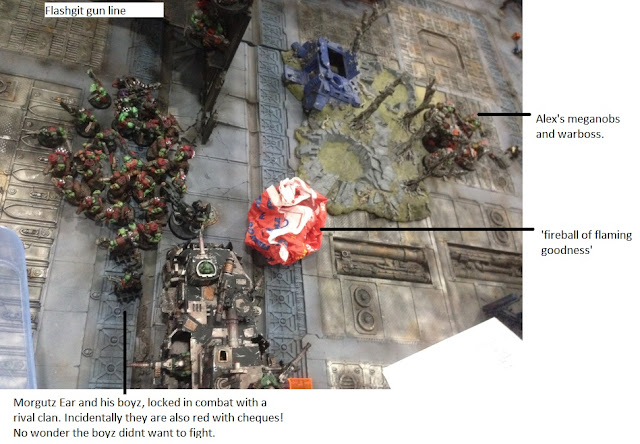 The game went on for 2 more rounds, though the assault with the boyz devolved into a brawl as all the orks got confused who was on whose side.

The game ended with Alex leading in points. It was my first time using trukks and battlewagons and I think I learnt abit on deployment and using these vehicles.  Also it was my first time playing against those meganobs, boy are they scary! Not used to shooting everything and not getting a wound on them.

Oh yes seems like i'm starting to like my warbuggies abit but using them as a twin linked immobile firebases is abit expensive. I gotta learn from the experts on how to move and use vehicle squadrons.

Til the next battle.

Warboss Morgutz-Ears pondered on his battle strategy and what went wrong. Though he didnt get the chance to engage into direct combat with Warboss Ahu-Ang. His bully boyz were certainly killy! He knew the answer. Bigger dakka!