Apocalypse: Imperials vs Tyranids (With over 18,000 points)

The guys and myself got together and made our way to Teck Ghee for the SOGCon, the Singapore Open Gaming Convention. We put together 3 major forces, first being a coalition of 3 Tyranid players, the second an Imperial force and the third a Dark Eldar Raiding Party. The following are mostly pictures and a few highlights from my perspective. Hope you enjoy it!

Imperials wanted to go first badly and bid 2 mintues for Deployment. Knowing that we wanted to go 2nd, the Tyranids bid for 1,000 minutes for deployment forcing Imperials to deploy first. Dark Eldar would not come on the table until Turn 2. They also had a sinister purpose as set by Marshall, our Apoc TO.

Rico was away and would only arrive Turn 2 onwards as Reserves. This was to balance Melvin who would also come in on Turn 2. 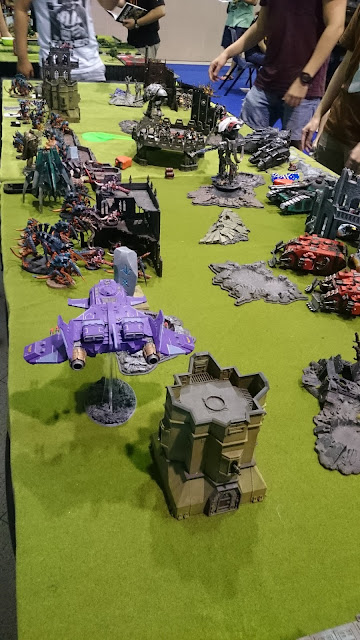 Turn 1 opened with fanfare. A Dreadclaw dropped from the skies with Angron sitting inside. Imperials used their No Scatter Strategic Card allowing their Deep Striking units pin point accuracy on arrival.


In the Tyranid turn, we turned around to attempt to open up the Dreadclaw and get to its soft centre.

In hindsight, I should have just left the right flank alone. The Marines did not have the mobility to redeploy and since most of the objectives were on the left flank, supporting the left flank would have helped the Tyranids more in the early game.


At the end of Turn 1, Nids scored 3 VPs while Imperials scored 4VPs (1 from killing the Tyranid Warlord - a very lucky scatter with the D weapon!) 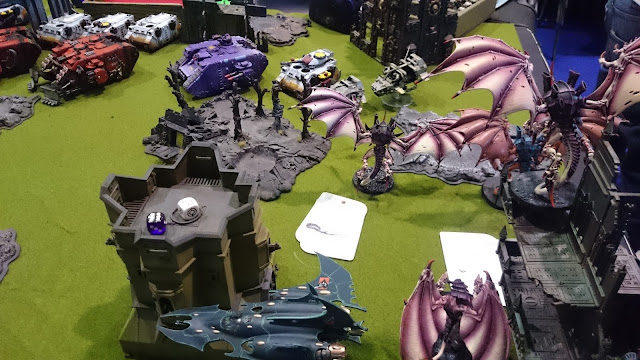 Turn 2 saw the arrival of the Dark Eldar. Alan who was controlling them saw fit to assist the Tyranids for his own nefarious reasons but Henry who played the Marines whipped out his Shield Array! This prevented the Dark Eldar from targetting Henry's Land Raiders, thus forcing the Dark Eldar to shoot at my Nids instead. Thankfully, not too many gribblies were harmed in the batrep.


At the end of Turn 2, the Tyranids used 1 VP for Orbital Bombardment (-1VP), killed the Imperial Warlord to gain 1VP, gain 1 VP for killing an Imperial Knight and captured 4 objectives (4x2points=8 points) for a total of 9VP's this turn.

The Imperials scored 1VP for killing the Barbed Heirodule and another 4 VPs for 2 Objectives. This gave them a total of 5VPs this turn.

The Nids were eeking a small lead but had lost quite a lot of their hard hitting units to Angron and a few lucky D shots. How will we continue to hold onto this lead or lose it to a overwhelming Imperial push? 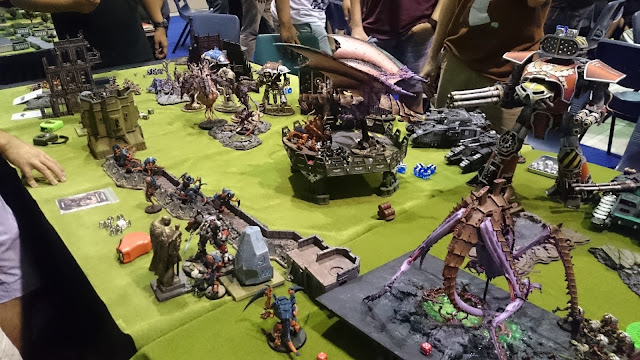 Unfortunately, the Tyranids seem to be able to get away with securing multiple objectives. As this was Turn 3, that meant a 3 Times Multiplier:

Tyranids: +1 for killing the Cerastus Knight and 12 points from the 4 Objectives.
Imperials: +6 from 2 Objectives

Moving into Turn 4 which would likely by the final turn owing to time limitations (looking at you, YC!), the we made our decision to bite the bullet and go for the jugular.


Alan who played Dark Eldar had a truce with the Tyranids! Looked like he preferred Marine parts to tentacles!

Rico moved the Harridan to attempt to kill the Reaver who was now limping on 4 Hull Points remaining! Would he be able to do it?


With Melvin looking, Rico managed to blast through the Reaver's hulls and breached the internal systems! The Reaver Titan was destroyed, creating a megaton crater and taking a hull point off the Fellblade next to it.

We made the tally and the final count was:

It was an overwhelming victory for the Tyranids (looks like our sneaky bribe to the Dark Eldar worked buahahhahahhaa).


Post Game Thoughts:
I felt that the initial opening salvo was very tough for the Tyranids. Without our Bio Titan support in Turn 1, we were taking massive casualties early game. Compound that with a lucky D-blast deviation, we lost our Supreme Warlord (who was ensconced in a Tyrant Guard unit as well!).

It was a glorious day when the 2 Bio Titans appeared to take the fight back to the Imperials. The opening salvo saw 4 Void Shields and 4 Hull Points stripped off the behemoth only to have 3 Shields regenerate in Turn 3. Once the Cerastus Knight and Terminators charged the Bio Titan I thought it was over for the Nids. But amazingly, not only did the Bio Titan survive, it destroyed the Cerastus in one sweep of it's claw and held up it's own against the Terminators. Seeing how the Terminators could hold up against a behemoth such as the Bio Titan also made me find new respect for them.

We were also lucky that the Dark Eldar and their brethren appeared to make things complicated (in a good way!). I was afraid that Alan would start targeting the Flyrants who were making their way up the right flank but the Coke bribe must have worked like a charm. He took to Henry's Marines and started pulling Henry away from the centre. The sideline banter was good and quickly rushed my Flyrants behind Imperial lines.

This game was also impressive because each and every one of the gamers who came put on a really good show. With public streaming in during the event, it was important that we showcase a good game. Each mini was painted. NOT A SINGLE UNPAINTED THING! Most had put a lot of effort and last ditch bursts to beautify their armies for this showcase. I am really impressed and hope we continue to push this level of hobby forward.

Finally, my thanks to the Players (Charles, YC, Melvin, Henry for the Imperials; Rico, Sam and myself for the Tyranids; Alan for Dark Eldar; and Marshall for helping with the Rules), their families for allowing them to take time off and to all the organizers for putting on such a great show. I wish we were able to start earlier and clock more turns but this is the best Apoc game I have yet had! I am looking forward to the next and indeed have begun planning with the ABO Crew. Stay tuned!
Posted by Anything But Ones at 9:36:00 AM