As the campaign rolls into Week 3, more Leviathan units awaken. This time calling onto reserves from Forgeworld and some creepy crawlies from Asphodex.

Just very happy how this campaign has kept my modelling side really pumped to get more models out on the table within a quick time. So if you haven't tried going on campaigns, I strongly urge you to take the plunge!

Hope you guys are having a great Christmas week!

Week 3 has come to a close and as Christmas fast approaches, games are going to get erratic owing to holidays and family dinners. Nonetheless, it was a good week with some interesting twists. Unfortunately this week for some reason, the pict feeds have been caught by Jokaero clogging up the tubes.

Here are some highlights from the week.

Corporal Alan twisted his fur coat about him, loosening the harness that kept his comms alive. All he knew was that he needed to hold his city at all cost. At the fringe of dusk, the Hivemind sent forth its latest spawn, Jason the Ripper to steal the city from under the Vostroyans. Corporal Alan mustered his forces and managed to hold the city, just. The Ripper slinked back into the slave ships to divulge lessons learnt.

Brother Captain Pat arrives in system with the Mantis Chapter and immediately makes planetfall with a Imperial Knight in tow. Throwing caution to the wind, the Mantis Chapter went for the gullet to try to blunt Hivemind Razor Ray; ignoring Imperial commands to secure the city. Cleansing the city, Brother Captain Pat again proves his tactical acumen.

Fresh off the disastrous Week 2 where the Imperium forces were forced into a massive rout by the Hivefleet Leviathan, remnants of the 43rd Vallorians have pulled back into the city of Asphodex to consolidate our defences and try to stem this tide called Hivefleet Leviathan.

1338 - Xenos sightings acknowledged. 43rd Vallorians are to hold Sector 13 for the Emperor.

With a new army list that now has Flyers in my list, I played a 1850 game against Marshall's Hivefleet Leviathan. 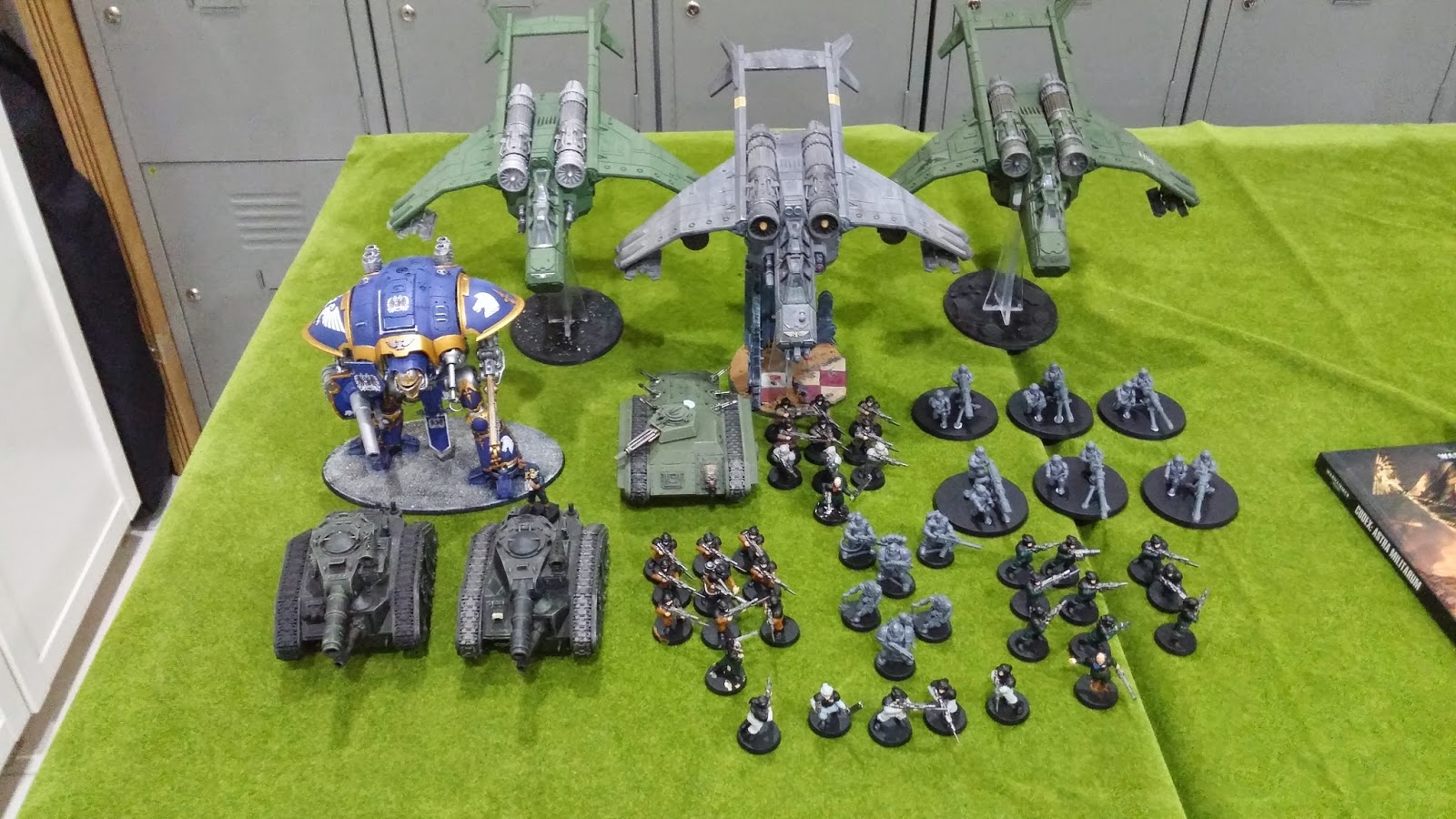 Fresh off the defeat I had at the hands of Patrick yesterday, I was out for blood! Challenged YouCai to a 1850 game. I changed my list from the previous day and here it is:

So there was a confusion yesterday over D Weapons and Look Out Sir. I was playing the Skytyrant Swarm and Pat charged in his Imperial Knight.

The question: When the Tyranid player chooses to do Look Out Sir, do the extra wounds caused by the Imperial Knight's D Weapon carry over?

Week 3 of the Shield of Baal Campaign has started and I just got in my game today. 1,850 points, I was playing against Patrick with his Mantis Space Marine Chapter which utilizes the Ultramarines Chapter Tactics. 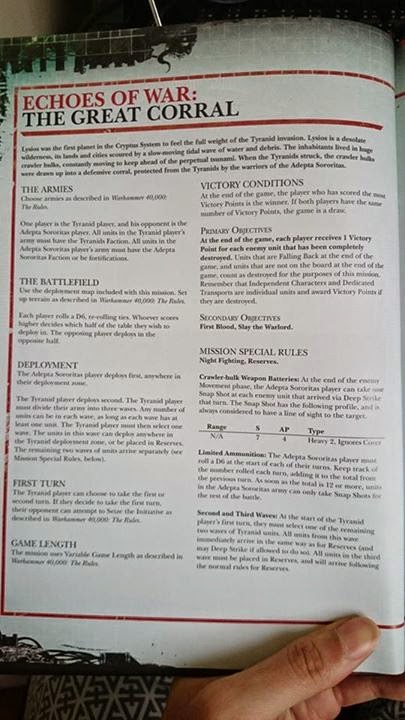 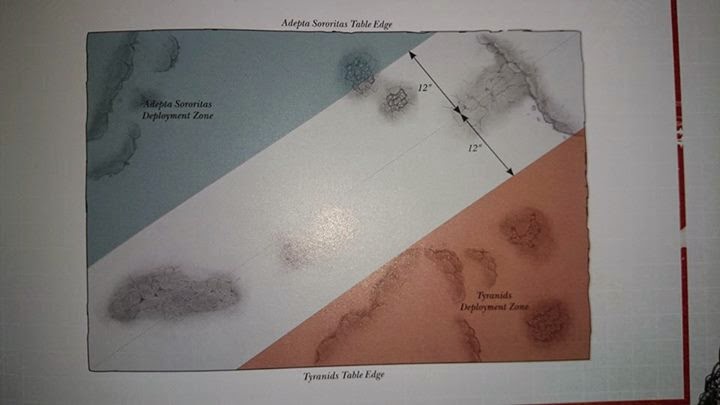 2nd game for the Shield of Baal week 2 campaign. I brought my Iron hands (Clan Raukaan) again. My opponent would be Titan Games store manager - Rico again as gaming buddy Jaeroler was coming back to 40K with his IG Astra Militarum and Ray was playing against him.

Pardon the unpainted Iron hands for the 2nd straight week, working on it... The amazing painted nids are painted by Rico (Golden Daemon winner).

Continuing the 7 part series for the Shield of Baal campaign that I am running at Titan Games, this is one of the games that contributed to the Tyranid war effort.

Something a little different. Jason, a new Tyranid player just joined the Hive Mind at Titan Games and came up with some sound strategy on how to make best use of the scenario special rules and win it for the Tyranids. Here is his story.

The Hive Tyrant Alpha circled its Swarm as it pondered the various tactical options available. Events the previous night on the other side of the metal ring had proven that The Prey were vulnerable in their metal shells, and that even the hard shelled defenders could be beaten. The previously accumulated knowledge came easily, and it knew all it took to get to the prey in the metal ring was the right combination of force and speed. It considered infiltrating Genestealer broods to get to the biomass within, but extracting that biomass once consumed would be a problem, given the grey-coloured defenders that surrounded the metal hulks.
The only option that presented itself was to slaughter the grey-shelled ones first, which presented an interesting conundrum, as far as the Alpha could feel the emotion of interest. The shapes of the grey ones were different compared to the yellow, with several moving on four legs, while three metal boxes were also on the field. Shapes it recognised as missile launchers were in prevalence, as the grey ones ran into formation. Spying the cannons on the large metal boxes that made the ring, it realised how to deal with the problem.
Stretching its extension of the Hive Mind’s will out to the Swarm, the Hive Tyrant summoned the creatures needed to break the defenders’ lines. Very soon, the feasting would begin.
Read More >>
Posted by Anything But Ones at 10:37:00 PM No comments:

Pre-ordered this the moment I knew it contained Tyranids and Blood Angels. Those Following the blog would be aware that I got the Space Hulk when it was re-released this 2014. This meant the start of a small contingent of Blood Angels who are steep in lore and history. Each model has a name and a backstory, making it an excellent differentiator from my xenos who seldom had names.

I am glad I purchased it. The Blood Angels will continue to build on the strong narrative driven force from the Space Hulk collection. Captain Karlaen and his strike force will now rendezvous with Sergeant Lorenzo and the other 1st Company Terminators to make it into my Blood Angels collection.


I am not too familiar with the Marines sprue so can't really compare with older sprues. However they are all complete kits (i.e. what you would get if you bought them separately). The same applies to the Tyranids so you will get all the extra parts. For example, I have not purchased the new Tyranid Warriors so this box set is perfect.

Worth noting too that the models in this boxset have special rules which are covered in the Deathstorm supplement. They are quite powerful too. I will probably magnetize the Warriors, Carnifex and Dreadnought.

The dreaded base size change. When I first read it I was perplexed and angry.I still am kinda. I would not be one of the Space Marine players who would be almost forced into re-basing their entire collection or suffer inconsistency across their collection. The one from the left is the new Fex base, Spawn base, Dreadnought, Warrior, Assault Marine and Genestealer. As you can see the 32mm is remarkably larger than the 25mm. This may cause issues in the competitive scene.

The two above area really nice and I am glad that GW made them. Really nice kits.

One thing struck me was the Campaign Supplement - a thin 30 odd page book. It has all the dataslates for the models in this boxset. The downside is that it contains the 2nd part to the Shield of Baal campaign, continuing the story from where the Shield of Baal: Leviathan left off. Really sly of GW to force people to buy this set to complete the collection. 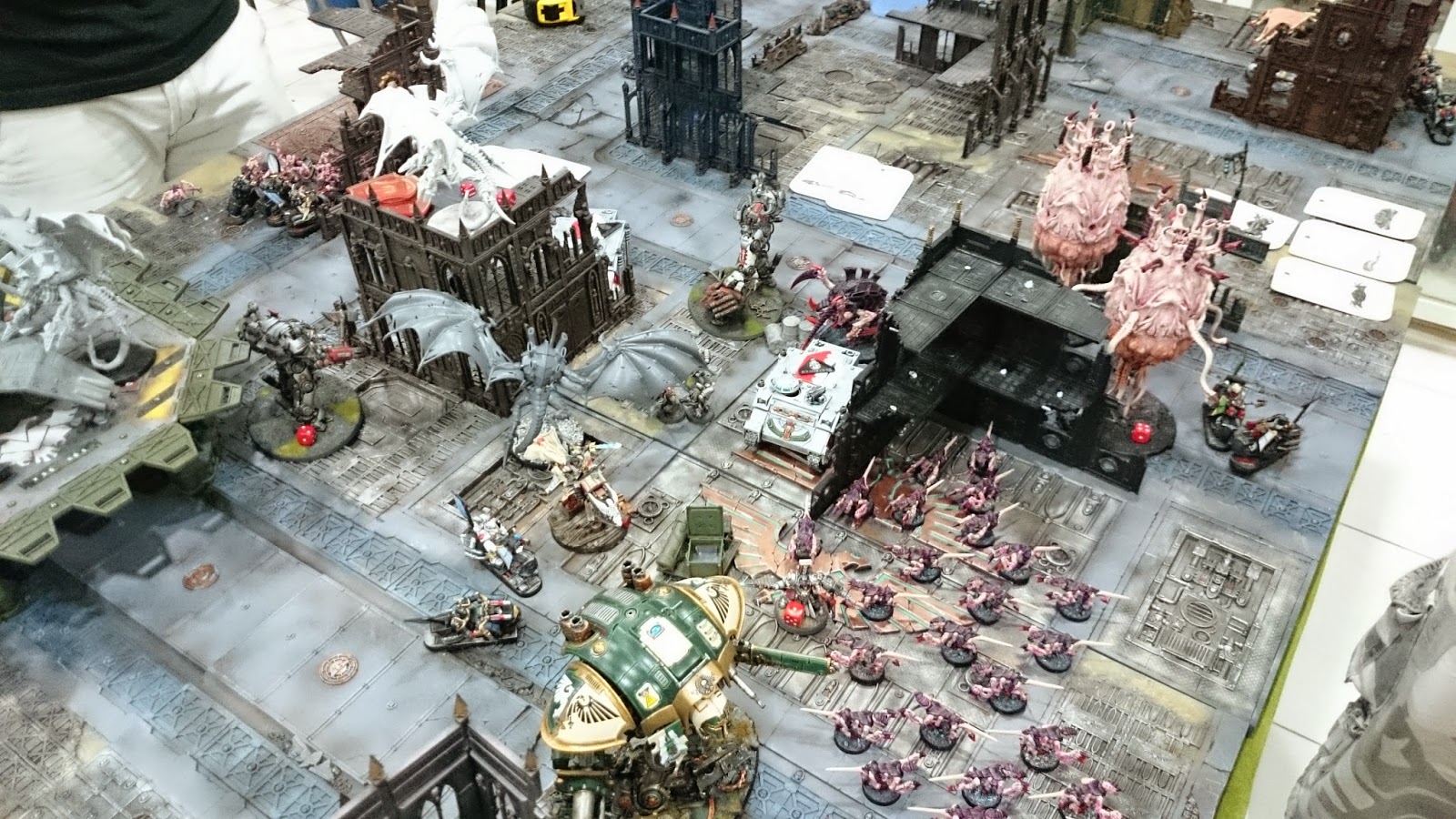 Tyranids: 1 unit of 16 Genestealers with Broodlord
Read More >>
Posted by Anything But Ones at 11:57:00 AM No comments:

The gaming group is currently playing the Shield of Baal campaign with sponsor from Titan Games LGS. Ray the planner for the campaign came up with the idea to expand the campaign armies involved to all Imperium armies to incorporate more gamers as not all 40K gamers have Imperial guard Astra Militarum/Sisters of battle Adepta Sororitas/Blood Angels.

My first game of the campaign is against Titan Games LGS store manager Rico who restarted his Tyranids army after a hiatus. Had been awhile since I last wrote a slightly detailed battle report.

Contributing to the Imperium war effort on planet Vitria, Clan Raukaan sent a small detachment together with attached Imperial knight house Ærthegn to eliminate the Tyranids menace infesting the same city ruins that saw the defeat of Astra Militarum vostroyans in an early battle.

3,000 points aside, we played a 2v2 game. Each player had 1,500 points to play with. This is the first game for the Shield of Baal Campaign that I am running for Titan Games. It is a 7 week campaign that uses league rules. Two main factions each vying for Mission Points every week. Each week will award a bonus to the final week's game which is an apocalypse game.

This week is the 1st week so we played the Vitria Strike Mission from the Shield of Baal Campaign book.
The reward for the apoc game is additional reinforcements for the winning Faction.
Imperial: 1 unit of 10 Scions (hotshot lasguns with 2 plasma guns) with Sergeant (the Kappic Eagles) mounted in Valkryie.
Tyranids: 1 unit of 16 Genestealers with Broodlord (both work out to 285 points)