This weekend was one wrought with ups and downs but thank goodness for 40k! Patrick organised a 1500 point tourney to herald the farewell to our gaming den, Titan Games. This would be a bittersweet tournament.

The vibe was contagious. Everyone brought their A game and the meta was really quite different from what we saw at the GREX Invitationals I attended with the boys. Some reason, the TG crowd brought more hordes and large units. In this meta, it would be the large units such as the Knights that would take the crown!

The tourney was also unique in that it goes back to the GW days where marking is done not purely on your wins but also your ability to paint and knowing your fluff. The TO's prepared a 20 question quiz to supplement the tourney.

My first opponent was none other than Rico with his really beautifully painted Necrons. Was really glad to have our armies duke it out. Unfortunately because it was a tourney and was timed, I couldn't really take as many photos.


Pretty funny when Marshall and Alan drew against each other as they are regular sparring buddies.


Compared to the previous tourney, you will find there is a lack of large things called Knights. There was however one such player, Fauzi! He would go on to be quite unmolested in the following games.

I really love the sea of Gants feel. Really invokes the Tyranids feel. I just wished GW buffed them a little, giving them a FnP 6+ while within Synapse would be amazing. This would really allow them to function in as tarpits and objective scoring units. Please GEEDUBS!


I eventually lost the game to Rico by 2 points, which we both agreed if he had rolled 1 or 2 on the D3 for Ascendancy (Maelstrom card), it would have been a draw. Amazing photos and Rico was relaxed so it was a good game.

Pat then jigged the names and came up with the next round of pairings. I then ended up with our own Ripperling, Jason! We had played once previously as practice and it went in his favour. This was already starting to look grim.


I went after the Wraiths but could not take it out. Ah well - Necrons don't really give out First Blood that easily.

Unfortunately, I lost this game by 2 points again! What is going on! LOL! But playing with Jason was also relaxed so I just took it as a fun game with a buddy.

Pat then rejigged the names and I was paired with Alan! He has been practicing with me recently but I was using Blood Angels instead. Alan has been working at his army quite regularly but fell shy of completing everything.


Alan kept pushing me to move and do stuff so I didn't manage to snap too many photos. I eventually finished the game and we drew! It was a Draw! Buahahhahahah!

Pat really came up with unique scenarios and I enjoyed it. It was creative and forces players to think on their feet.

While I didn't finish well in this tourney, I managed to get the Lucky Draw ($30) and won the Best Painted award ($50). Really lucky and happy! I took that prize money and picked myself up a Predator (albeit Chaos) to supplement my Blood Angel army - I will just drop off the Chaos bits. Thanks to Titan Games, Liang and Patrick for organizing such a great experience. I think it was the first for many players too - who were basically casual players.

On a sadder note however, Titan Games will be closing this weekend. It was a great place to hang out and make new friends. We were building the community there but I guess the business wasn't sustainable. I know we at ABO go away having done our part. I only hope the next place we go to will offer us the same type of honesty and support. In return, we will support the store and help develop the community.

Farewell TG.
Posted by Anything But Ones at 1:49:00 PM No comments:

I recently attended my very first tournament, the Last March of the Titans, and what a blast it was.

The event was part of the closing down of the our regular gaming haunt, which is really a pity, but everyone of us arrived with the clear intent of having fun in the remaining time.

I was trying to prove you could still be fairly competitive without a Decurion, so I ran a Necron Mephrit Dynasty Cohort. Bargelord, Night Scythes with Immortals inside, Wraiths, and a Transcendent Ctan. my opponents for the day ended up being Grey Knights, Ray's Tyranids, and Space Wolves.

First up was ZY's 2+ Grey Knights, with not a suit of power armour in sight. And here I left home without my AP2 lol. Predictable moment #1 of the day, I did next to no damage against his list, while he slaughtered his way through my bargelord and wraiths. Lessons learnt: Don't charge a bunch of AP3 Hammerhand terminators when they've got Force activated. Major loss for me.

We grabbed lunch and went back into the fray, this time I was up against my old nemesis Raymond. We had tested our lists against each other before, and so Ray spent what would have been list explaining time on deploying his hordes of minibugs. Predictable moment #2 of the day, we started 15 minutes late. Haha.

It was a relic mission, and I charged my Wraiths in to combat to claim it. Ray did the same with all of his small bugs, and it turned into a meat grinder as my Wraiths blended the small bugs one by one, unfortunately not claiming the relic. I lost my bargelord (again), but the game came down to a Kingslayer+Assasinate roll which gave me 6 points in total for killing his flyrant. Narrow win for me.

The final mission set me up against Tim's Space Wolves, which used two separate formations which gave them rerolls to hit and wound. Painful stuff if they were allowed to use it, but I chose to tarpit them and run for the objectives with my greater mobility. Managed to pull off a win, with my bargelord finally pulling in some points.

The final tally saw me end up with some points on the board, thanks to the last two games and a fluff quiz. Pretty fun stuff, and it definitely encouraged me to try out more tournaments. Next up, A Time of Legends! Hopefully it'll be as fun as The Last March.

Many thanks to Patrick, Lim Liang and all at TG for organising the event, and congratulations to the eventual winner Fauzi!

As part of the Slowburn League, I committed a Fire Raptor for my pledge. I actually built this model about 3 months ago but only recently started painting the model. I love the way it looks, the aggressive lines and silhouette. I just wish that the Stormravens all shared the same type of look but alas, that model looked more akin to a flying Rhino. This model however is a work of art.

I hope this has inspired you guys to complete yours.
Posted by Anything But Ones at 9:42:00 AM No comments:

With a little extra time on our hands, Alan and myself got a few beers and lunch. Set up for the next game by adding a few units to my 1850. I added units which I thought were successful in our previous game. So I brought in the unit of Tacticals x5 and its Razorback with TL Assault Cannon + Dozer Blade. Because this wasn't technically a tourney prep game (tourney coming up is 1500 and not 1850), I added my Forgeworld units. In came the Sicaran and Fire Raptor.

Mission was a combined of Big Guns Never Tire and Maelstrom Escalation. I managed to get first turn so deployed first.

Because the mission was Escalation, both of us decided to play extremely cagey to preserve them for when the actual missions started flowing in. It was critical to accomplish those in hand quickly as the turns grew on.

Until today I still do not agree with deploying vehicles on ruins/buildings. I wanted to see if it made any difference and the answer is a whopping no. It's unfluffy and is tactically silly. Unless of course LOS doesn't matter to the said vehicle, it still is bloody unfluffy!

I tried for a strong drop deep into Alan's deployment zone but scattered off the table. Alan kindly placed my Pod in my own territory. Wootsause


The big issue with Drop Pod armies is that you have to really commit to the push or just risk losing the dropping units. That also forces me to commit to a particular way of playing and if this isn't really the way I want to play them, then maybe I should consider dropping the Drop Pods for a slower army. I still can't decide...

The Forgeworld units go to work

Ah well, this was a post beer game so hahah! I had fun and so did Alan that is the most important.

See you guys around!
Posted by Anything But Ones at 6:06:00 PM No comments: 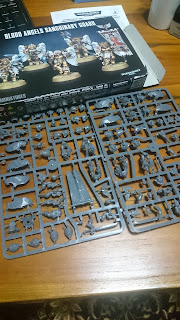 So basically after this game with Orks, I tweaked my list to include the Sanguinary Guard and dropped Mephiston. Apologies for the confusion!
Posted by Anything But Ones at 9:11:00 AM No comments: