Looks like the biggest craze right now are Twin Linked Brain Leech Devourers. I have to agree, they are really powerful. When you put two pairs of these into the hands of something like a Carnifex or a Tyrant, you are going to get lots and lots of shots. Best yet, add Old Adversary and you get to reroll 1's on your "to wound" rolls! What's not to love?

So I begun my hunt. The ones that came with the Carnifex kit was just way too piddly for a Tyrant or a Carnifex. These were some of the pics I found online which I liked.

So I called him up and he made me 2 pairs of those babies. I took them home and hit a problem. I didn't have enough skills to sculpt greenstuff to flip arms around. I needed to find existing arms that were both left and right and didn't mean that I had to sacrifice a weapon that I may really want to use. After about 30 minutes of looking in my bits box, I found the Crushing Claws from the Tervigon kit. I snipped off the bigger claw at the joint and then affixed the conversion Sam provided me. And then BOOM! I have two sets, one for my Flyrant, the other for my Walkrant! Thanks Sam!


Now that the Tyrants were done, I had to find a solution for my Carnifexes. I really liked the Hive Swarms from the Tyrannofex kits but the stats were crap in game. So I had two pairs lying around and I had 2 Carnifexes that needed 2 twin linked brain leech devourers. 1+1 equals 2!

I added magnets to the joints similar to my other weapon options for my Carnifexes and smooth them out using green stuff.

Once they are painted I will snap them into place and I will have a WYSIWYG army again! Hope this post helps you guys out there struggling to find enough Twin Linked Brain Leech Devourers.

Managed to get another game of 40k in. This time with Defeng who brought 1750 of Imperial Guard. When he was unpacking his army, I thought it looked very 5th Edition with the number of tanks he was bringing. So I chuckled since I brought enough anti-armour. Then we rolled for mission and deployment.

Mission: Emperor's Will
Deployment: The one where we deployed on the extreme ends of the board

Doh...now I have to trek at least 2 to 3 feet of board before I could start shooting his tanks. Ah well, 6th ed, I love you so.

We rolled for Warlord Traits and I got the same from the game with Sam. Looks like my force was fleeing the fight with Imperium. The vanguard were the Space Marines and now they have left the mop up to the Imperial Guard. I can't remember which trait IG got.

IG let me deploy first forcing me to spread my force across the board wide. I left both my Tyrants in the middle so I can react quicker. Anchored the rest of my force with the two Tervigons. Hive Guards all hid in the buildings

I managed to roll Iron Arm and Warp Speed for my Flyrant. The Walkrant got Warp Speed and Enfeeble. 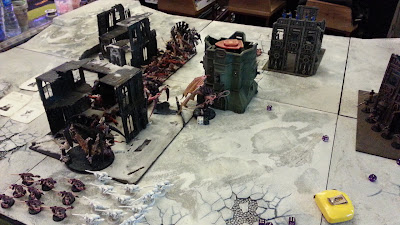 Start my first turn by spawning 2 broods. Casted Iron Arm and FNP on the Flyrant securing +2T. Unfortunately, I think Ol'Jammy had enough so stopped producing. Turn 1 again. Glided my Flyrant forward. I didn't push too fast up since I didn't manage to get a +3T so didn't want to risk taking too many shots in the face from his Battle Canons. 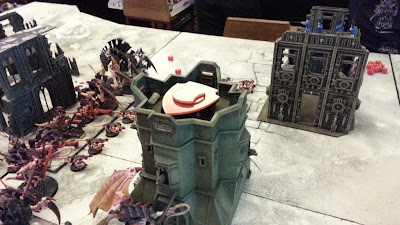 The blue guys in the terrain above had 10 Ratlings so I poured a ton of shots into it. Managed to remove 5 of them. 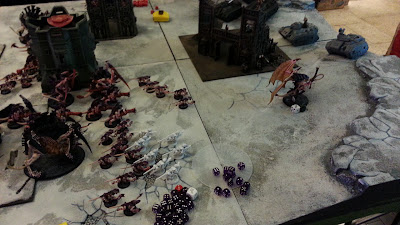 Across the board, I pushed forward. This time I was a little more aggressive with the Flyrant now that there are a lot more targets that the IG has to decide on. I managed to take out the Chimera right in front of the Flyrant. 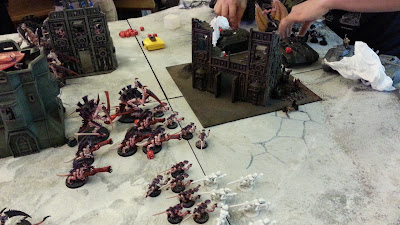 I pushed my Flyrant into his lines. I was Swooping this time so was gambling that he would not have enough firepower to hit me to ground me. Didn't count of the Guardsmen in the Chimeras. 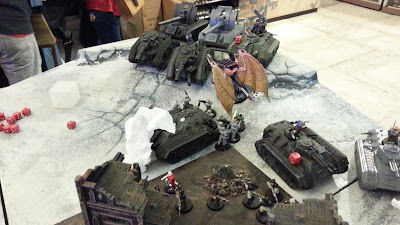 Without the Flyrant to bug him now, he concentrated some heavy firepower into my Carnifex in the open and managed to remove it. 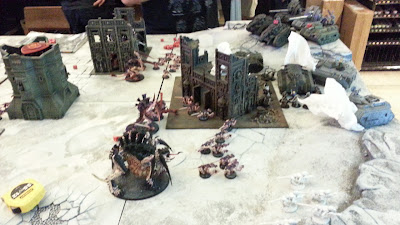 As we closed the gap, I was able to wreck more of his Chimeras. I was focussing on removing his troops now so I can capture or at least contest the objective in this deployment. 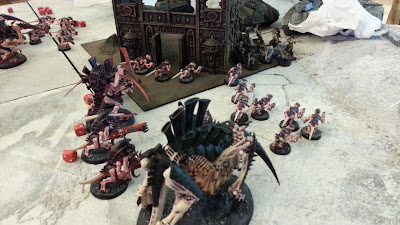 In Turn 4 the game swung heavily to IG. He managed to take out most of my Monstrous Creatures. First the other Carnifex then followed by my Walkrant. Then to add salt to injury, took out a few more Hive Guard just as I closed the range. 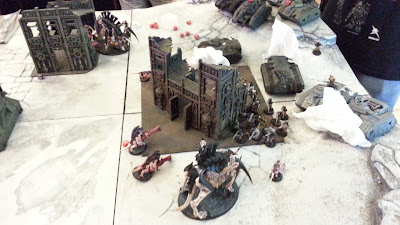 With what was left I pushed hard into his deployment and objective. 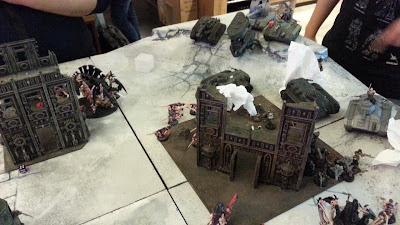 Why I love Hive Guard. I still had 3 more hiding in the building on the left and did they go to town once in range. Managed to take out his Leman Russ and Basilisk (it was proxying for something I can't remember what's it called) 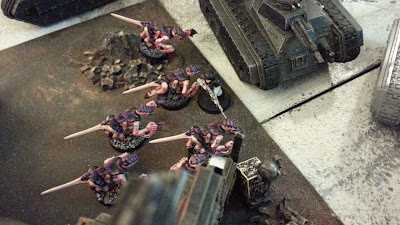 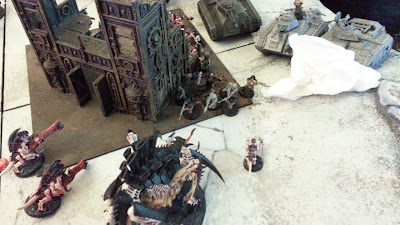 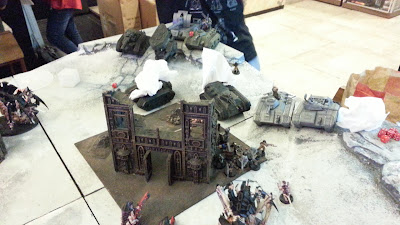 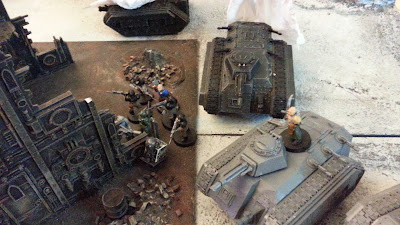 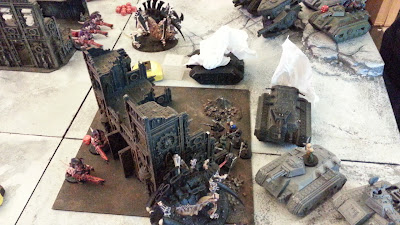 But I pushed forward with the Tervigon and eating occurs


The game actually was supposed to go on to the 6th turn but we called it. Prolonging it would have just made it worse for the Imperial Guard. I would have taken out his tanks and claim the objective for Tyranids.

Not a fan of the lengthwise deployment but I am glad my list can survive such heavy IG bombardment and still make it to his lines without the help of Gargoyles or flying Warriors. Game on people!
Posted by Anything But Ones at 11:08:00 AM 3 comments:

Awesome gaming goodness these past few days. ABO really kicking it down. We went down to Funan Battle Bunker again. Played with Sam this time who took Black Templars. Rolled on the following:

I got the dice off for first turn and I went for the classic cluster. Carnifex leading the charge with Tervigons next to them. The Tyrants kept behind just a step to benefit from the 5+ 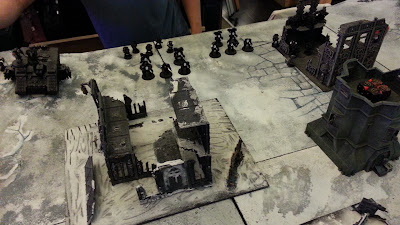 BT spread his units a little wider, using the Land Raider's mobility to push from the flanks. Two units of Tacticals took the building on the right, claiming the objective

BT tried to steal initiative but failed on a 4. 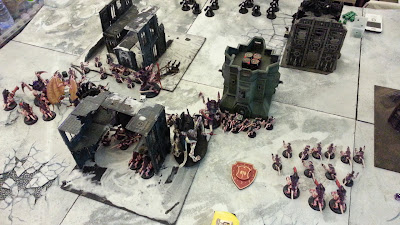 Tervigon on my right pooped out a few Gants and then JAMMED. Recurrent trend? Tervigon on the left pooped out quite a number but kept on going. Moved the rest of my unit up. Tyrants both advance to the fore but I glided my Flyrant to the left field to tackle his Land Raider.

My mysterious objective turned out to be Skyfire. Woopdeedoo! 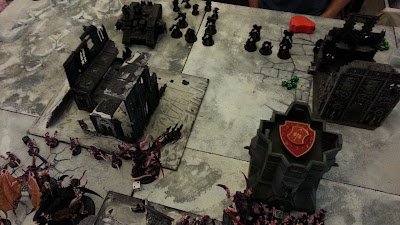 Iron Arm on my Walking Tyrant with +2 Toughness. I sent him in front to soak fire 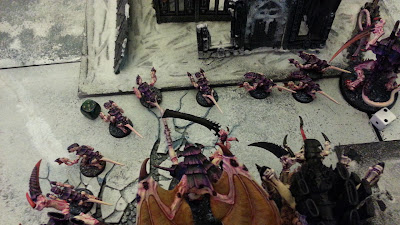 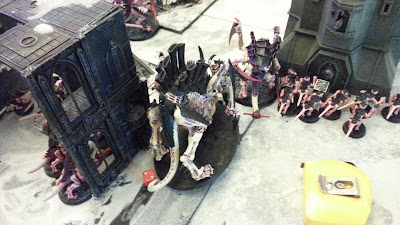 BT shooting in the first turn removed 2 wounds from my jammed Tervigon.

In Turn 2 I advanced my Flyrant up the building and managed to cast Iron Arm on himself. Tervigon on the left spewed forth more Gants, this time a little albino ones to blend into the white terrain. Concentrated my shooting into his Terminator squad in the open on the right of the building. Managed to kill off 3 Terminators after 12x4 (rerollable) Str6 shots. That's 48 rerollable Str6 shots. Wow those Terminators can really shrug off pain. His Land Raider took 6 shots from my Hive Guard on the left and survived with only minor scratches (needed 6's to glance).

In Sam's turn, he responds by moving his army forward.


The bulwark of Humanity does not disappoint. In Sam's Turn 2, out popped the Emperor's Champion, BT Marshall and 5 Terminators. Yikes! My plan was to let him charge me then envelop him with my Gants.


Those Black Templars hit like a ton of bricks. The Emperor's Champion challenged my Tyrant putting the Tyrant out of combat from the rest (nice). Managed to put one wound on that muppet while taking none in return. The rest of his squad killed a ton of my Gants as Sam split charge - Disordered Charge which meant no +1 Attack. 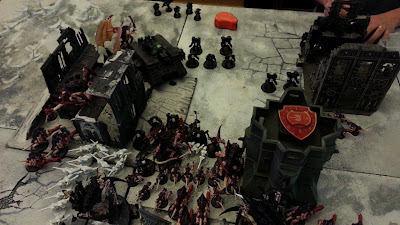 In Nid Turn 3, I glided my Flyrant to his rear lines while the Tervigon in my lines pooped out a few more Gants. Still no doubles. Nice. Hive Guard plinked away at the Land Raider this time managing to strip 2 Hull Points.

Slay the Warlord goes to Sam 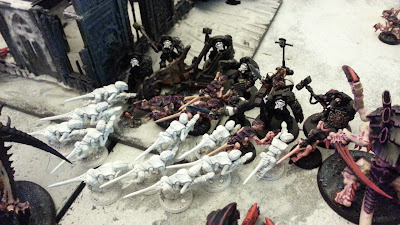 So in a bid to repeat my success from the previous game, I threw my new unit of Gants into this Space Marine Spearhead. Go go go Gants! 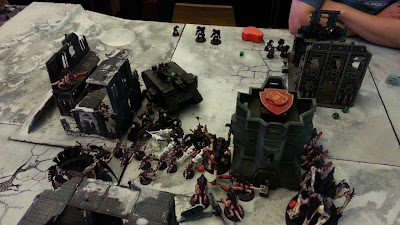 Put more shooting from the Hive Guard into the Land Raider but no luck removing those points. 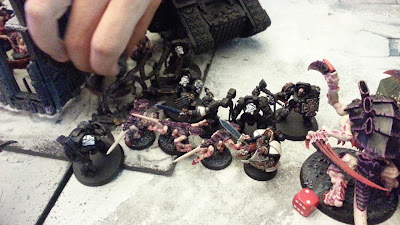 I had a unit of Gants in the building just behind these Terminators which I planned on sending into this combat to tie the Black Templars up. I rolled the charge range and I got double 1's. Sigh... 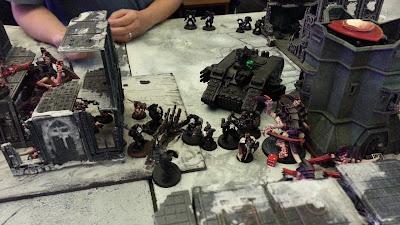 Freed from the irritating Gants, they could pick and choose their targets now. I was in deep guano.

Emperor's Champion takes out the Fex for no wounds in return. 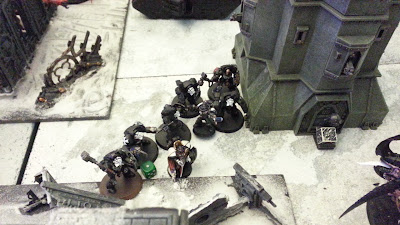 Sam moved is unit up to contest my Objective and deny me my 3 VP. He also had secured Slay the Warlord. I managed to get First Blood.

It was an awesome game nonetheless. It has been a long time since I played with the ABO boys. Sam brought a good strong list, one that I hope to play against again till I learn how to beat it. Watch this space!
Posted by Anything But Ones at 9:44:00 AM 9 comments: