Fresh off the boat from the Lunar New Year 2013, I was itching to get a game in. Since Marshall was still in Singapore till the end of this month, I contacted him to organise a game. Marshall and I had a game previously and he was really hankering for a grudge match too. 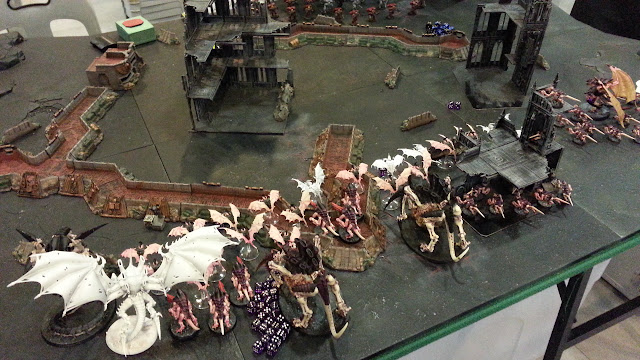 Having tweaked his list, he came up with the following instead:
Blood Angels 1750

I brought my original list that I played against him previously. Key difference being my models! I painted a few more streaks on my Tervigon and built my White Flyrant.

Warlord Traits:
Tyranids - Conqueror of Cities (All your units have move through cover and stealth when moving through ruins)
Blood Angels - Night Attacker (You can choose if Night Fight takes place Turn 1 or not)

Spread both my Flyrants to the corners of my table half to attack him in the flanks and then had my Gargs do in the middle. In hindsight, this was a grievous error. There was just one objective on his half of the board. I should have focused all my firepower on my left flank.

The White Flyrant didn't have Iron Arm. In hindsight I should have clustered the Gargs around him to shield him as we moved up field.


Feel No Pain on Marines is ridiculously good when you have this many Marines on the field. They are basically like Terminators with 3+, 5+ Invul. And man did Marshall make those FNP rolls.

Surged everything forward. I needed to tie up his squads and then use my Flyrant to deal with the incoming counterattack. Sent both Flyrants up field to kill as many infantry as possible.


Actually quite a scary sight seeing that many Marines on 3+, 5+

Shooting in my first turn did not do much to his army mainly due to his Godly saves. Only 2 Marines succumbed to 24 rerollable hits which wounds on 2+. Both Flyrants were Zooming Turn 1.

I managed to actually make my checks and did not suffer falling down from the sky. Phew!


Or so I thought. The plan was to use the Gants to engage the Assault Marines on my right while the Flyrant tackles the Marines on the left.


All the while Marshall was rolling really well for his FNP saves.

The plan was to keep the Tervigons both alive until the end as my Gants were holding onto the objective. Here is where I could have played differently. I had lost 5 wounds from my Tervigon at the back and was retreating her. Moving her back put her in Synapse (and also in popping range) of my Gants Losing the Tervigons meant I would lose my objective holding Gants. Keeping the Tervigons forward could have mitigated that problem.

Marshall moved the Stormraven behind my units and started opening up.

So he had one other Marine alive. I doubt he hid the model deliberately. I guess I should have asked if he had other Marines alive because that dead pile was bloody confusing. And true enough that single Marine was enough to capture the objective.

We were also both running out of time. It was 11PM now and we were both keen to finish the game.

This was one of the most nail biting games I have had in a long time. Marshall is a great and fair opponent. I am sure he did not hide the Marine deliberately and the problem of models still in play getting mixed in the Dead Pile happens quite a lot. Nonetheless, I was so confident until the last turn when his Death Co came in and I was sure again that he could not steal the game from me. Until of course that Stormraven took the last wound from my Tervigon giving his Death Co room to charge and pop the other objective holding units! Awesome game! I want revenge!!
Posted by Anything But Ones at 9:10:00 AM