One of our most prolific players who has won a number of tournaments here in Singapore sent pictures of his collection to me. All 7000 points of it. I will let the pictures do the talking. Enjoy! 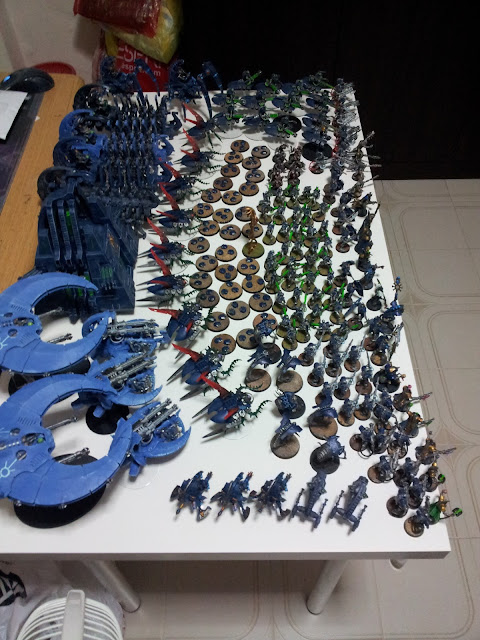 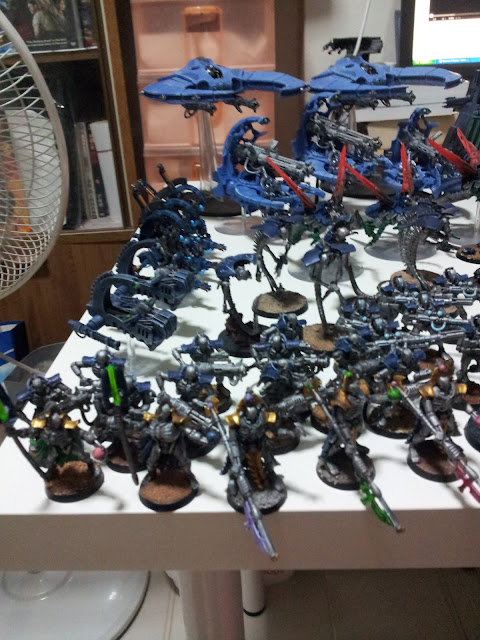 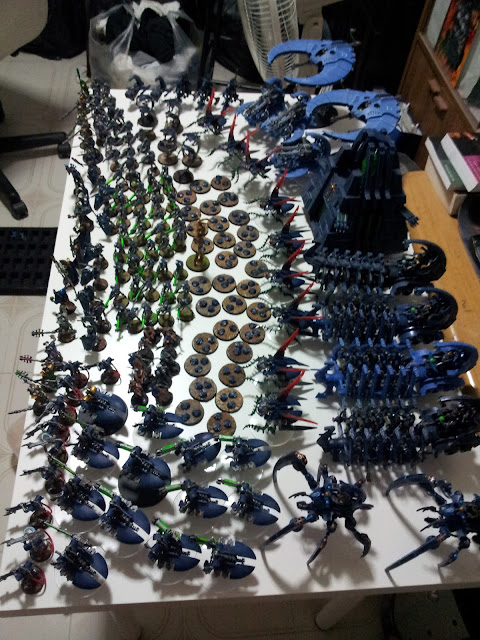 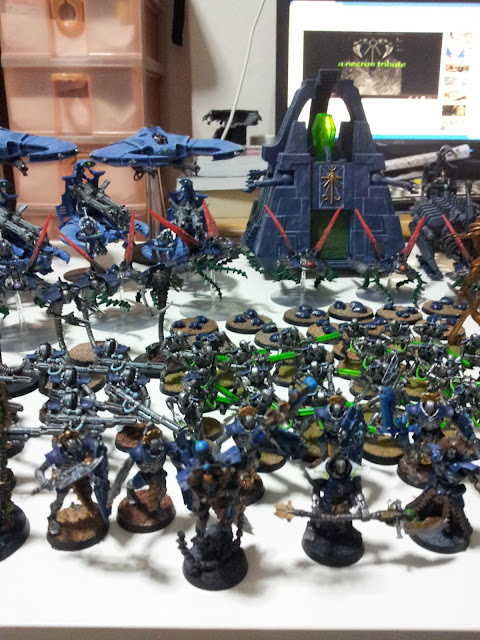 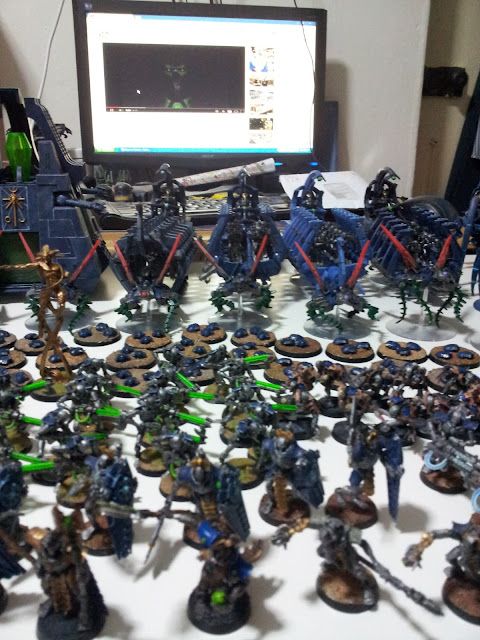 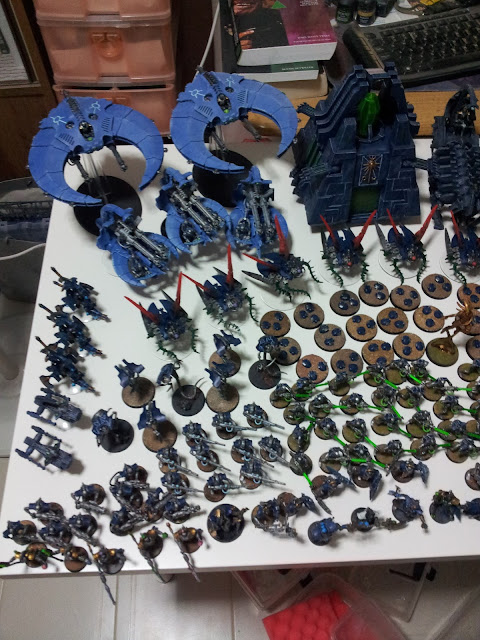 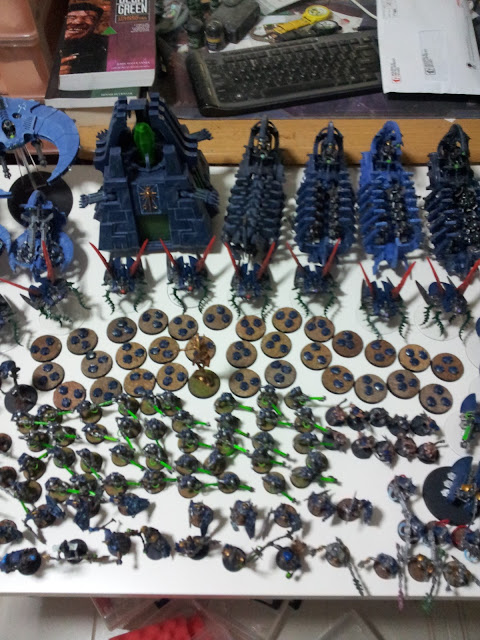 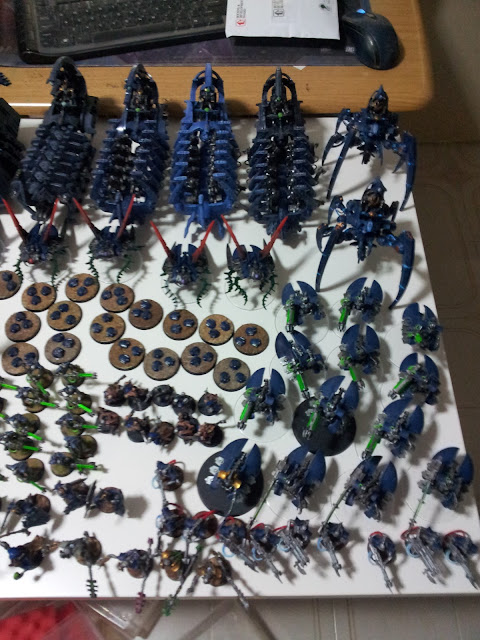 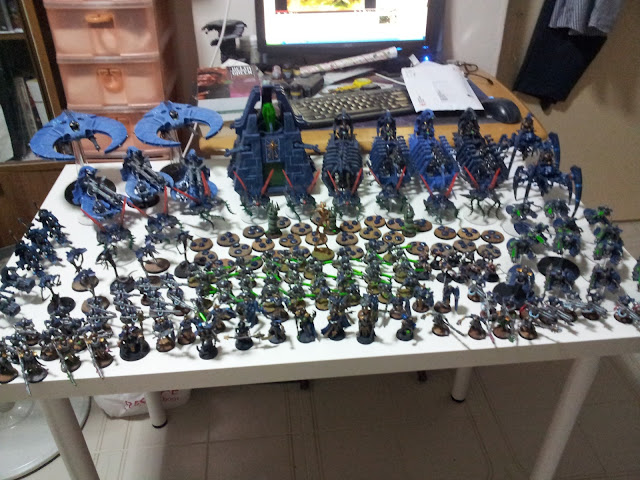 And if you want some good Necrons tactics and strategy from our Guru, do post below and let us know!

Edit: 20th February 2013 as posted by Patrick Poh (the owner of this army)

Necron, what can we say about them?

They are quite Newbie friendly in my opinion, well not as GK friendly but quite up there together with Marines.

Why? Well, for starters they are T4 and above with the exception of scarab swarm. They can also deal with almost everything with their ancient weaponary.  The humble gauss flayer for example, can glance any vehicles to death, with the new 6th edition this is very good. They also have good armor save from 4 and 3+ at least, except scarab swarm.

New players will also be happy to know that Necrons are extremely difficult to take down in shooting due to the reanimation protocol rule.
What I really like about the new Necrons, is their versatility, you can play almost any way you like. Unlike the previous edition, you have more toys to field. Armor 13 spam? Infamous Cron Air? Scarab farm? Warrior spam? Cryptek combos? Or a balance list? Its only limited to your imagination.

Necrons also have a new team of special characters that you can choose from, like Imhotek the Stormlord with its funky lightning and night fighting rules. How about the servitors of the undying race? We are talking about Spyders, Wraiths and Scarabs.

They are all fearless, and fearless is great in 6th edition as you no longer lose wounds due to losing combat, thus making them excellent tarpits at the very least.

Ok I talked quite a bit about their strong points, so what is their weakness?
Well, they are slow, and I mean real slow at Initiative 2. Although they can endure a fair amount in close combat, they will almost be certain to get overrun the moment they lose combat so be wary of that.

Does that mean the Necrons are weak in combat? Not at all, you got good melee units like Destroyer Lord and Wraiths who are in my opinion very durable against most close combat units, but at WS 4 on almost every units except Obyron, it is better to fully utilize their range capability. They also don’t have psychic powers to play with, although they have a better form of psychic defense in the form of gloom prism on the Spyder.

I hope this small article is a bit of help to the new players who want to try the metal robots out. If you are looking for an army with great medium range fire power and durability, give the Necrons a try. I won’t go into the strategies and tactics, but please feel free to ask and I will share what I know. Till next time, Game on!
Posted by Anything But Ones at 10:46:00 AM