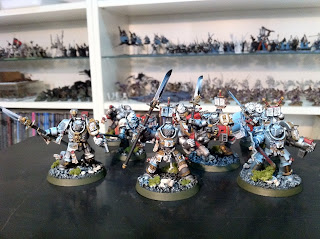 Here you can see the completed unit of Purifiers and Paladin (missing is Paladin Standard Bearer WIP)
I have used the Zenithal & Object Light Source (OSL) methods in approaching this army as I felt it was a new technique I had wanted to try out for awhile now and as the GK are such a small army it granted them the privilege for a more elaborate paint job.
It is my first try and I still have another 10 Paladins and 2 Dreadknights and Draigo to practice on before I complete my GK army. 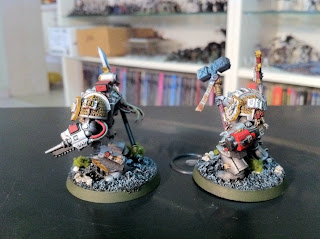 Here we see the "normal" non OSL side. 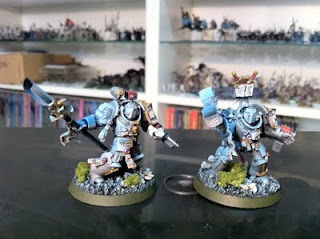 Front view with the OSL showing. 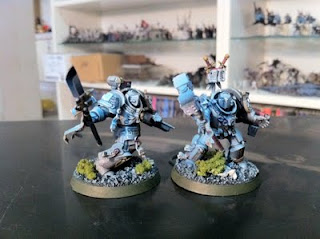 Right side with the OSL dominating the figure.
This guys took me about 25-30hrs to complete. And although a large percentage of the work was done using the airbrush (both Zenithal & OSL) there were loads and loads of little details that were particularly straining to paint while I was using traditional painting techniques.
The OSL was quite a challenge as I was afraid it would destroy my paintjob but I'm glad it turned out alright. Now that I'm quite confident of the procedure I might do a step by step painting tutorial once my next shipment of Terminators arrive from Maelstrom!
Hope you guys enjoyed my week of Grey Knight painting madness!
*now where did I put that Dreadknight that was halfway done.......