Played a game with Alvin yesterday. It was a 1750 point game in preparation for SporeCon 2011 so we played one of the mission "Get to the Trees". More information can found here: http://www.pi.com.sg/dev/images/images/spore-con%202011%2040k%20missions.pdf

This build is based on my Tyrant and his buddy of 3 Guard + Prime. They would form the anchor for my force while the other bits of the army keeps behind this wave of pain. Termagants provide cover for my Guard while moving up. Tervigon keep generating Gants. However, like all plans, they crumble when they hit the enemy.

Side note: I need to open and build those 2 boxes of Gants.

As you can see from the batrep, the mission was weird. There are basically 3 main objectives:


Players be aware of this. I was swamped by the number of things I had to accomplish and Tyranids have to stay together. For this mission, I reckon I will try to draw for the Objectives and score for KP and Table Halves. 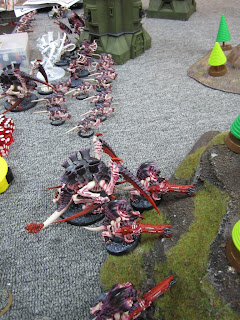 On to the actual game proper. As always, head on over to https://picasaweb.google.com/enrgie/4thApril20111750NidsVsBAAlvin# and do leave comments because this keeps me doing this! Also it lets me know what you like and don't like so I can improve my army and battle reports.