Pardon My Sense of Humor... 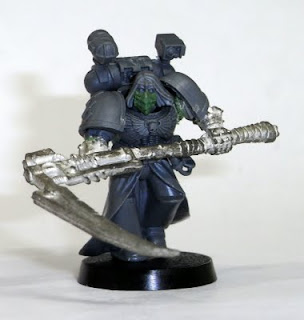 The scythe on, effectively, a doctor, just tickles me. And seriously, no one will tell me that isn't a "+1S rending close combat weapon".

I'm thinking of either naming him normally (my current name is Taledar) or to go for a parody (Cipro Floxacin, a pun on the name of an antibiotic used to treat typhoid, from where Typhus's name was derived from....and theres no need to guess why Typhus is brought up in this post :P).

General fluff idea is that he is actually born from an assassin caste in his homeworld, but decided to become a healer instead, while still maintaining his natural brooding darkness and crazy assassin-ness. Think "very scary doctor" and its not too far off :X

And of course, that Apothecary backpack is magnetized, in the advent I don't take Corbulo and need a second SHP with a jump pack.