A Labour of Love: My DIY Chapter

I've been thinking about starting this "blog project" for a while, and certainly Enrgie has tried his level best to convince me to blog about my work. I am fairly busy and generally distracted by life (and often, other games during my free time) but I thought I'd just get the ball rolling here.


I started 40k back when I was in primary school, with little more than a bunch of old plastic Marines, a Predator, a single Terminator and an old Ultramarine Commander in 2nd edition. Being a young kid, the choice was obvious for me - I liked Space Marines since the moment I laid eyes on my cousin's Space Wolves, and I liked the color blue. Thus, my army started as an Ultramarine army, but alas, after 3rd ed. came out and we managed to get a few games down, I realized one thing: I hated shooting, and "codex" Space Marines are precisely that – fairly shooty.

Then came the 3rd ed. Blood Angels codex back in 1999 (I believe) and after playing it, I was hooked. Thus began the dilemma - I loved blue, but had to repaint them into something that wasn't Ultramarine; I had to make a DIY chapter. Enrgie suggested combining their colors together so I could maintain their Ultramarine "heritage" while making them clearly not so, and thus the Emperor's Fury was born. Twelve years ago I was barely a teenager, and the color scheme/chapter name seemed fine to me (heh).

Clearly, being that young, my painting skills were pretty bad and thus I come to the point of this post: over the past ~15 years of miniature gaming, I have played many armies and many game systems, but ultimately my DIY Space Marines are still “home” as far as my miniatures go. Over the years I've accumulated a decent amount of miniatures (so much so I'm not going to dig everything out for the obligatory group shot :P) but more importantly, I've gone back to my old miniatures and redone their paintjobs and adding in new bitz to make them look better and more updated.

Thus, I'll generally blog about my DIY Chapter as I revisit them. Updates will probably be slow and far in between, but at least it would eventually get somewhere. In the meantime, enjoy some (albeit rather old) "before and after" photos to get an idea of what I mean by revamping the paint jobs :) 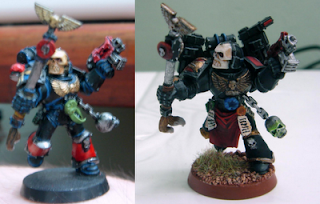 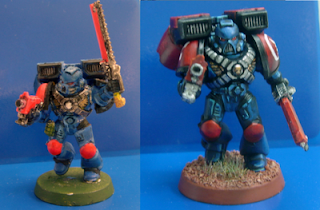 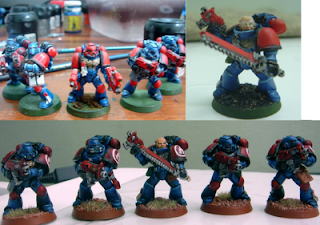