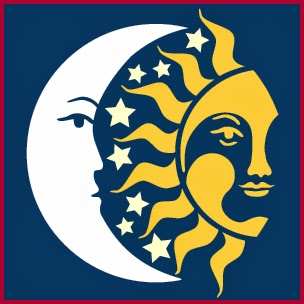 I've been quite busy with real life stuff of late. And I'll also be starting my new old job in the middle of March. That leaves about 2 weeks more of painting and watching YouTube like there's no tomorrow haha!

I'm also reminded of the upcoming Apocalypse battle at the end of March with my gaming group. And so I decided to return to my Iyanden Wraithknights and at least get them painted up more. They are at time of blogging about 50% complete.

I have the option of fielding them as a Dreamwalker squadron in Apoc games, but I got a feeling they may work better as seperate units. This way they can target more enemy units.

I have named my trio of Wraithknights as The Firmament. This is because I have painted them in the theme of the Sun, Moon and Stars :)

Isirion & Sunfire
The first of Iyanden's Firmament will be the Wraithknight Sunfire. The construct is piloted by Isirion Riverwind who now leads the Firmament. Isirion's twin is her sister Isarien who fell in battle during the attack on their craftworld by Hive Fleet Kraken. Isirion and Isarien were both previously Fire Dragon Aspect warriors. 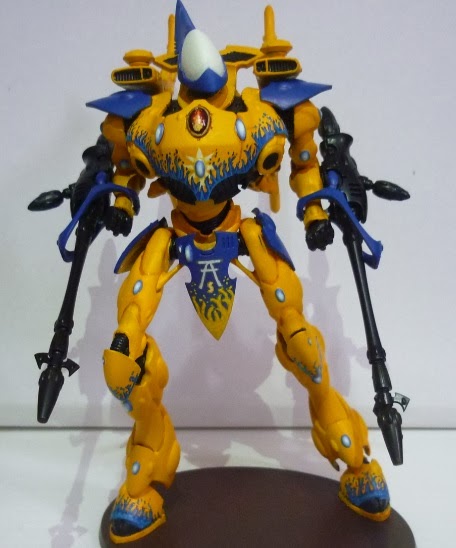 Sunfire is easily recognizable by the patterns of living flame on the chest  and legs of the construct. 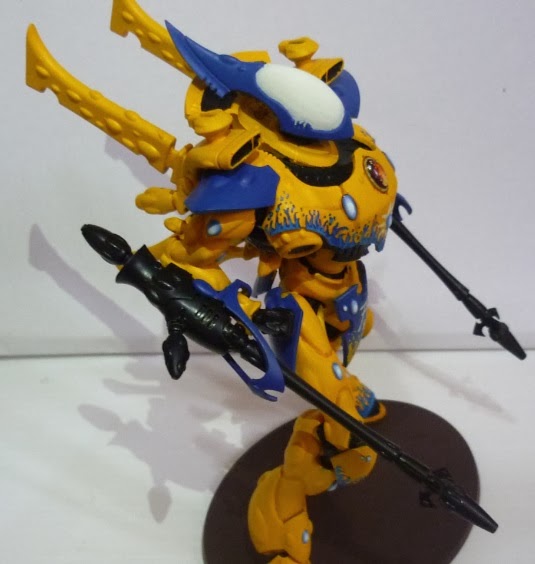 Her weapon of choice is the dual Wraithcannons as they are reminiscent of the Firepikes wielded by the Fire Dragon Exarchs. 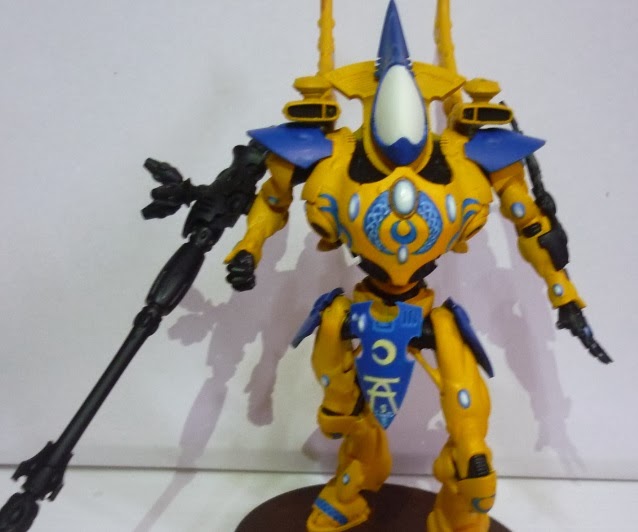 The Wraithknight bears the markings of Isha's moon. A reminder that she still watches over the Eldar. Crescent shaped motifs are also emblazoned throughout Ghostmoon's armor. Adaeryn is also a twin as all Wraithknight pilots are. Her late brother Alaerin was the Exarch in the Dark Reaper squad that she also served in. 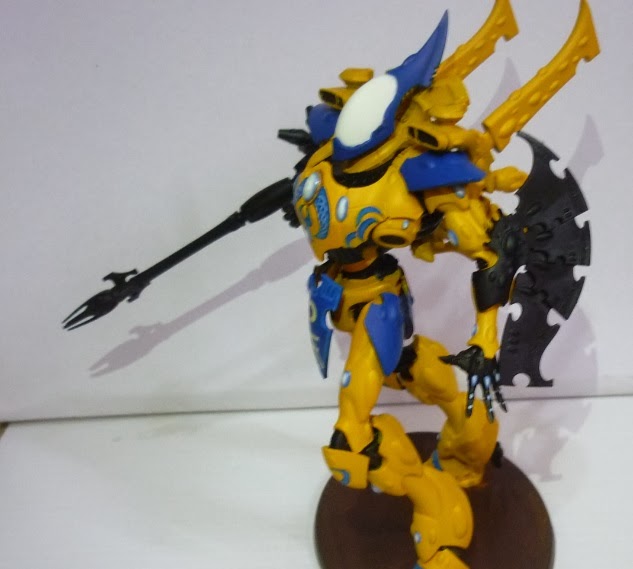 Adaeryn's favored weapon is the Suncannon, a weapon similar to the Dark Reaper Tempest launcher.

Ciond & Amberstar
Ciond Brightheart is the pilot for the Wraithknight called Amberstar. Amberstar is recognizable on the field of battle from the trinity of stars marked on the chest plate. 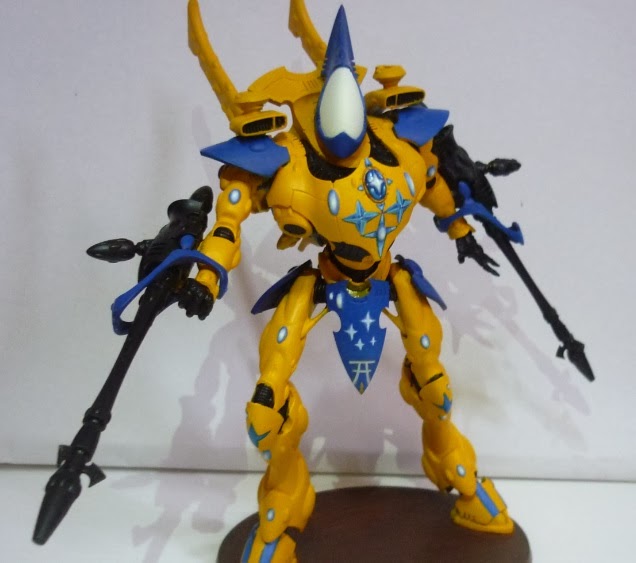 The star motif is repeated on his knee guards and tabard. The stars signify the origins of the Eldar as The Children of the Stars (a small homage to Tolkien's eldar). 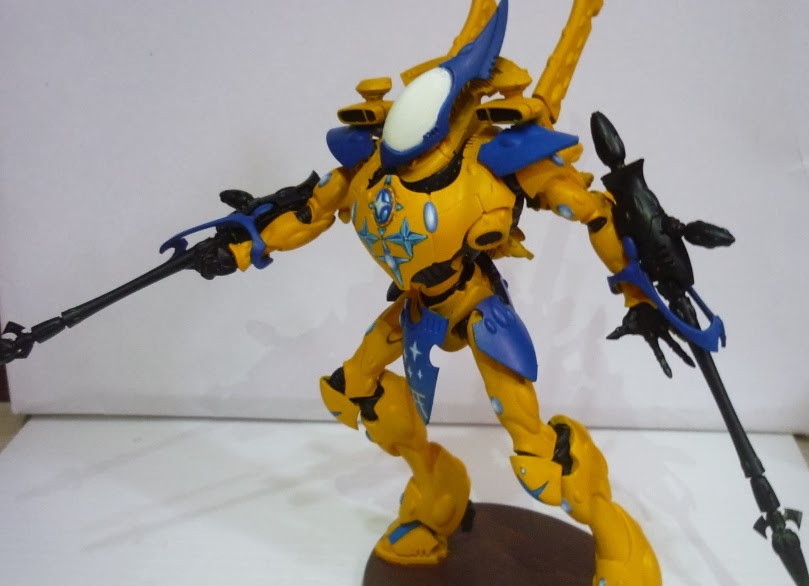 Ciond and her twin Fiond were pilots in the Eldar Scorpion class Grav Tank. Their vehicle was destroyed in a fierce battle. The Scorpion's engines were breached when two Keeper of Secrets attacked the vehicle after materializing next to it.

Their favored weapon is also the Wraithcannon. A weapon similar to the deadly Pulsar on the Scorpion grav tank.

And a final pic of the WIP Iyanden Wraithknights. The Firmament together in a Charlie's Angel's pose hehe! 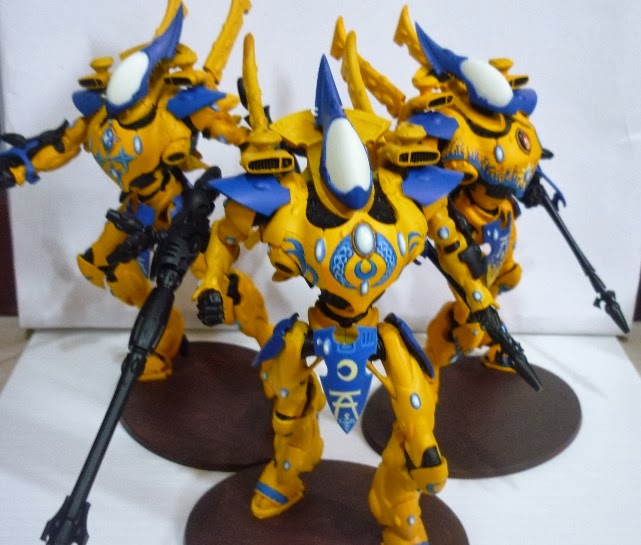 Lessons Learned: Painting the Wraithknight
1) It would have been better to have painted it in parts rather than fully assembled.
2) Yellow is a rather unforgiving color to work with. Use a fine detail brush for freehand work. Take it slow.
3) Paint the darker colors like the black of the interior first. Then paint the rest of the model. So you won't get darker paint spots on that yellow.

Blue: I used a base of Mordian Blue. This was followed by Mordian Blue with Enchanted Blue mix (50:50).

Bluish-Gems: I used a base of Calgar Blue. Then added successive amounts of White Scar.

I have not finished painting the Wraithknights yet and am still halfway through the process. So I may add on to the colors used at a later stage :)

I thought that finishing up the Wraithknights would also be timely as the Imperial Knight is now out today! Epic battles between the two knights await!