Managed to get in a game with Alan on Monday evening and man it was a brutal one. I am gearing up for a 1500 point tourney so this list had to be able to stand up to all sorts of cheese.

We played a combination of missions to make it fun:
Cloak and Daggers + Emperor's Will

I won the roll off but chose to let Alan go first. Night Fight was in play


Letting Alan go first paid off. The reason I did it was because of Emperor's Will - giving me the last turn to grab objectives giving me 3VP per objective secured. He managed to only kill off one Marine in the First Turn. Looked like it paid off. 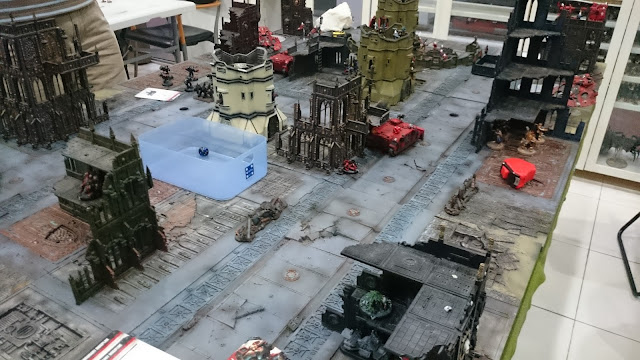 Moved most of my stuff mid field to try to bring pressure to his side of the table. The idea was to control two thirds of the table giving me access to 4 out of 6 objectives.

Out spewed the Wraithguard. First using Mephiston quickly thought me something-he has no invulnerable saves! The Wraithguard wiped them out to the man. Alan scored Slay the Warlord.

Alan pulled back most of his units and the Bastions in his side of the table was really giving his Reapers tactical advantage. My units not only lacked cover but also died to AP3 weapons.

The mistake of forgetting Rapid Fire weapons prevented me from assaulting. This was silly because it allowed the Wraiths to fire for another round.

At this point I had little left on the table but kept on playing anyway.

Also, I kept rolling 1's for my Reserves and Cassor was never going to see battle. Alan allowed me to bring it in since I had nothing much left on the table. Good sport

Wiped to the last man in Turn 4. Wow....this list needs a lot more work. Firstly, Mephiston does not have any form of Invul saves making him easy meat since he will sit for one turn. Mephiston needs an Assault Vehicle like the Land Raider or Stormraven.

I've changed out my list and will bring a variant next Monday. I hope it will work better. Many of the changes are made based on my experience from this game. Giving it another shot!
Posted by Anything But Ones at 2:29:00 PM