Some modelling updates over the Past month 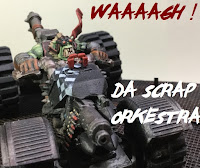 Last day of September today and i'm like a frenzied bloodletter typing away to get 1 more post before midnight...


Some work in progress shots trying to the cheques onto my converted ork warbuggy. I cant believe I took 2 months to decide how to paint them and then in an anti climax, settling on just go faster cheques.

Note to self.
Masking off cheques only really comes out nicely when using a spray (airbrush), I didnt take a photo of the horrow after I peeled off the masking tape and realising all the white paint had run! 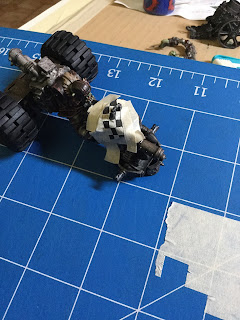 The ork wartrakk has been around I think since when I quit 40k ermm 16 years ago. I decided I had to upgrade and modernise the kit alittle, Chopping off the frontbike and adding the new awesome looking ork warbike on the front.

Mental note to self: damn, the wartrakk just got even larger.. would I be able to stay completely out of line of sight (LOS) now? 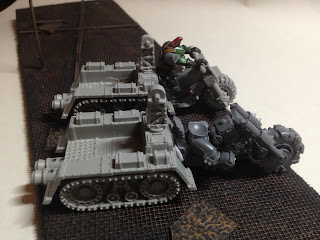 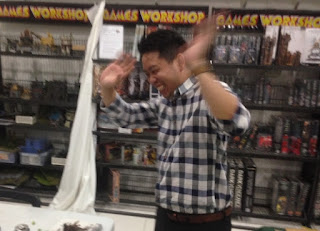 Warboss Alex and I had a 2v2 game against Charles and Alan, it was one of those games, where we were laughing all the way, convinced that we were going to lose and enjoying every minute of it. A miraculous roll of dice on 2 of those D3 points for objectives cards, suddenly swung the game in our favour.

Anyway the star of Alex's army was his beautiful core unit of warbikers and his painboy on the warbike. I decided I needed one too!


GW didnt make a model but I thought I saw a few converted models online. After clipping off the waist and legs of a painboy, I did some dry fitting onto the biker legs and onto the warbike itself. Hopefully the surgery and reassembly would please the Mad Doc himself!

Heres a tip.
I realised that GW wants the builder to assemble the bike first, then insert just the lower legs over the saddle. And then glue on the upper half. Its almost impossible to seat the ork fully assembled into the seat.


This works great if this is an out of the box build but with the painboy conversion there wasnt a smooth mating surface between the upper and lower halfs.


In order to create a small mating surface between the upper and lower halfs of the conversion, I first aligned the 2 halves, placed a pin through them and squished some green stuff between the 2 halves. BUT BUT before squishing the 2 halves together, I dusted talcum powder.. (well actually SAF foot powder because Orks like it like that) as a form of 'mould release agent' so that the 2 halves wont get too tacky and stick together.

Once the green stuff has fully hardened, I can continue to prime and paint both halves and then gluing together when I'm thoroughly satisfied.