As the resident Fleet Admiral of Anything But Ones, I participated in the recently-concluded Star Wars Armada Core Set Tournament organised by Gamersaurus Rex. It was a fun-filled event with a total of 11 participants from all over. 7 players played as Imperials and 4 players played as Rebels. It was going to be 180 points and 4 rounds total. 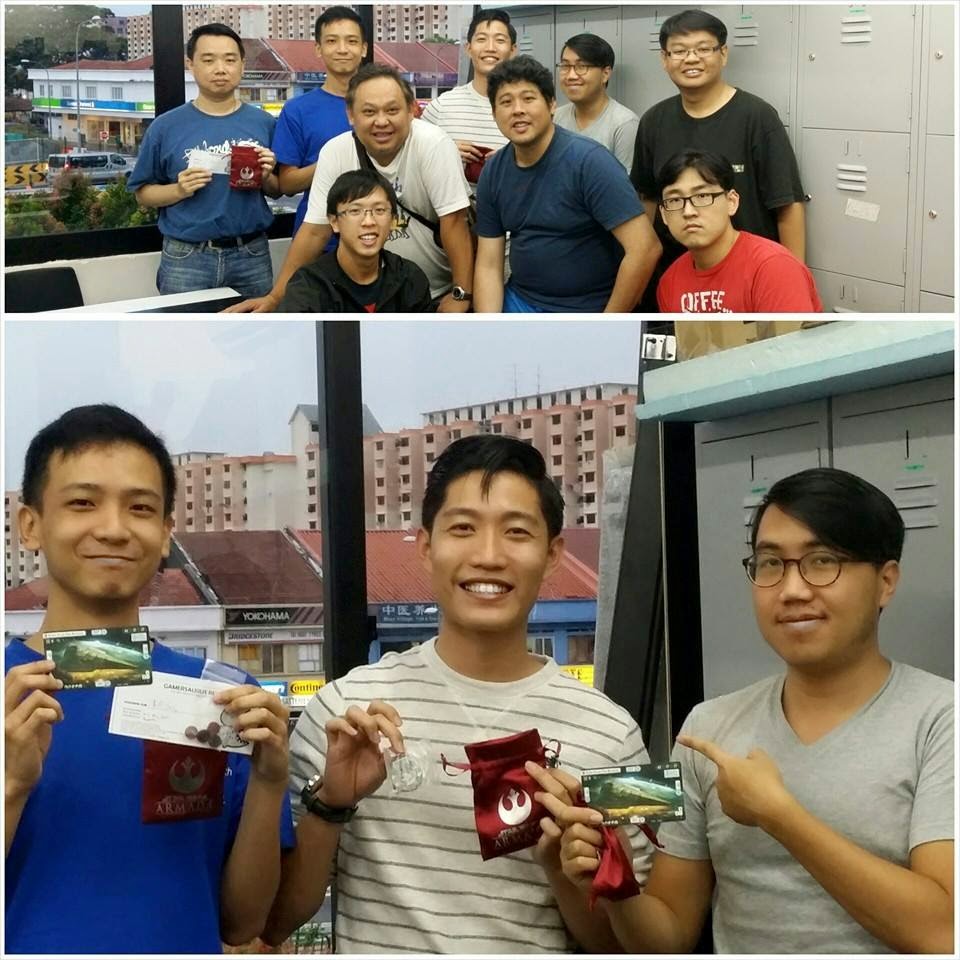 The 9 Admirals of the tournament with 2 having left early.

I talked over it with Admiral Benjamin from Titan Games and we felt that Rebels would be under-represented in the tournament. So we decided to gung-ho it and bring Rebels as our faction. Due to the format being a 180 point tournament, this is what I brought : 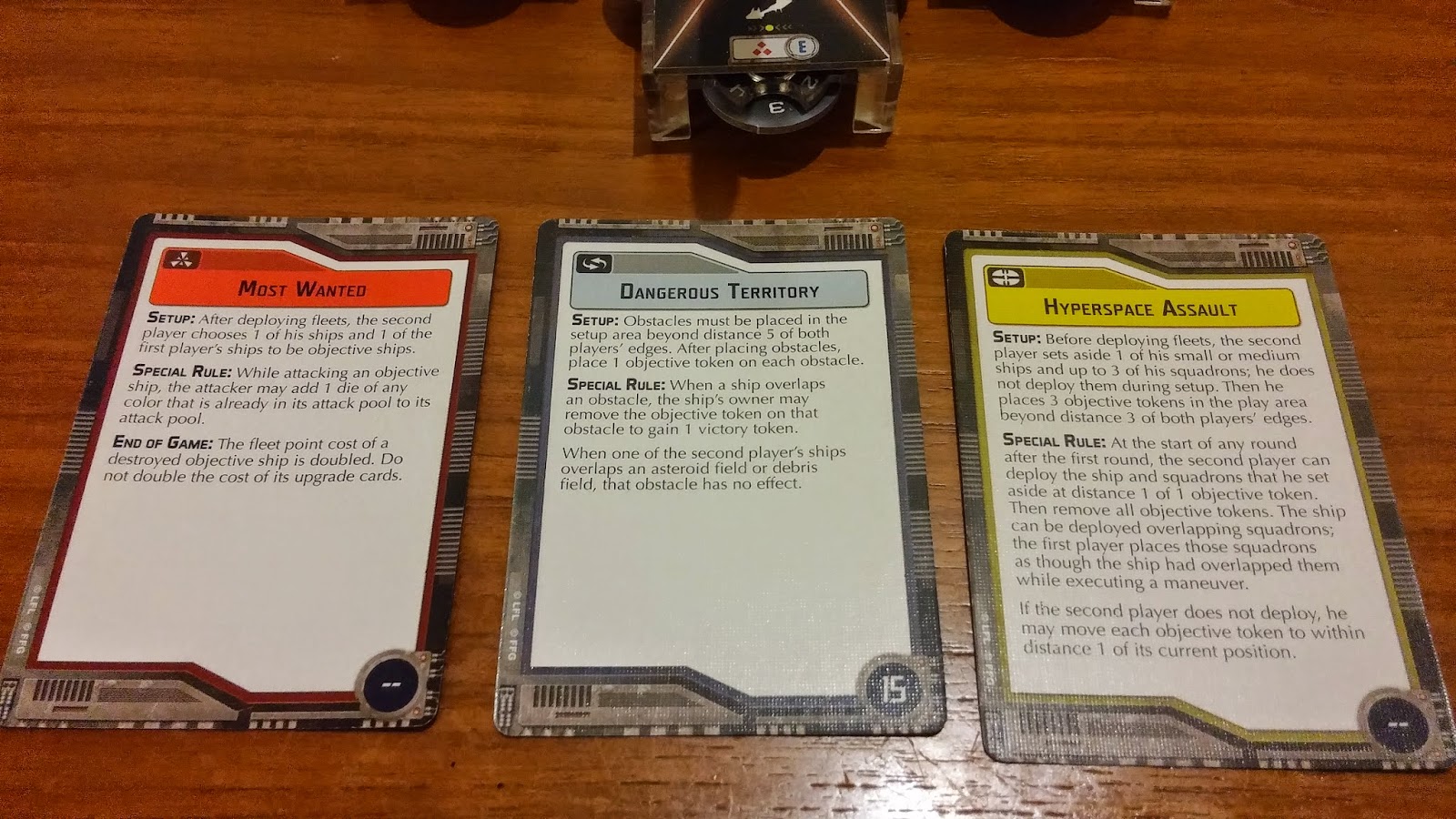 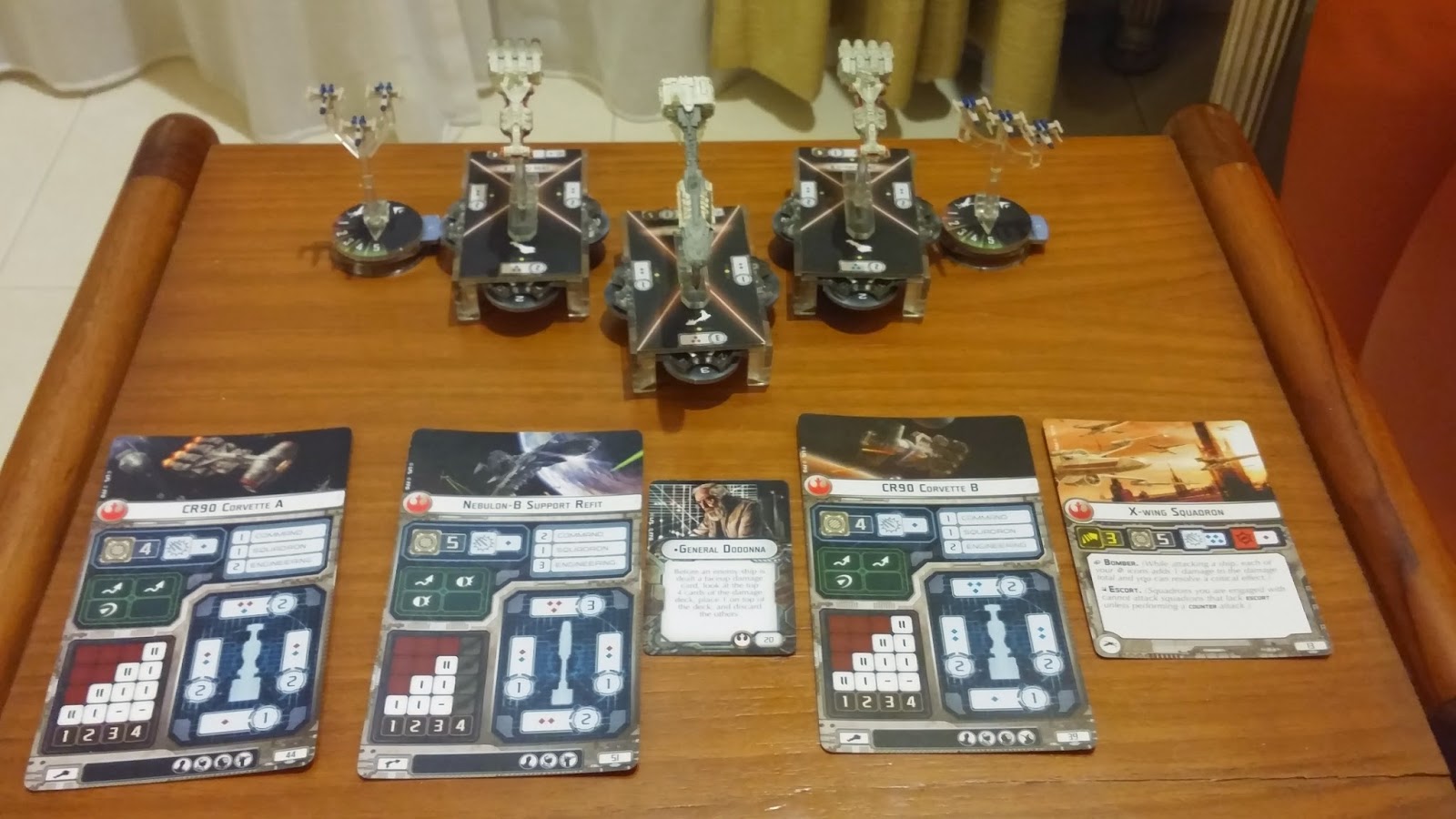 The 3 Objective cards I brought was Most Wanted, Dangerous Territory and Hyperspace Assault.

This was my first tournament in the past few years so I was pretty much pumped up to face off against fellow admirals!

My very first game was against someone who was very very new to Star Wars Armada. In fact, I think he mentioned that this was his first competitive game! I spent as much time coaching him and explaining the rules as we did playing the game. 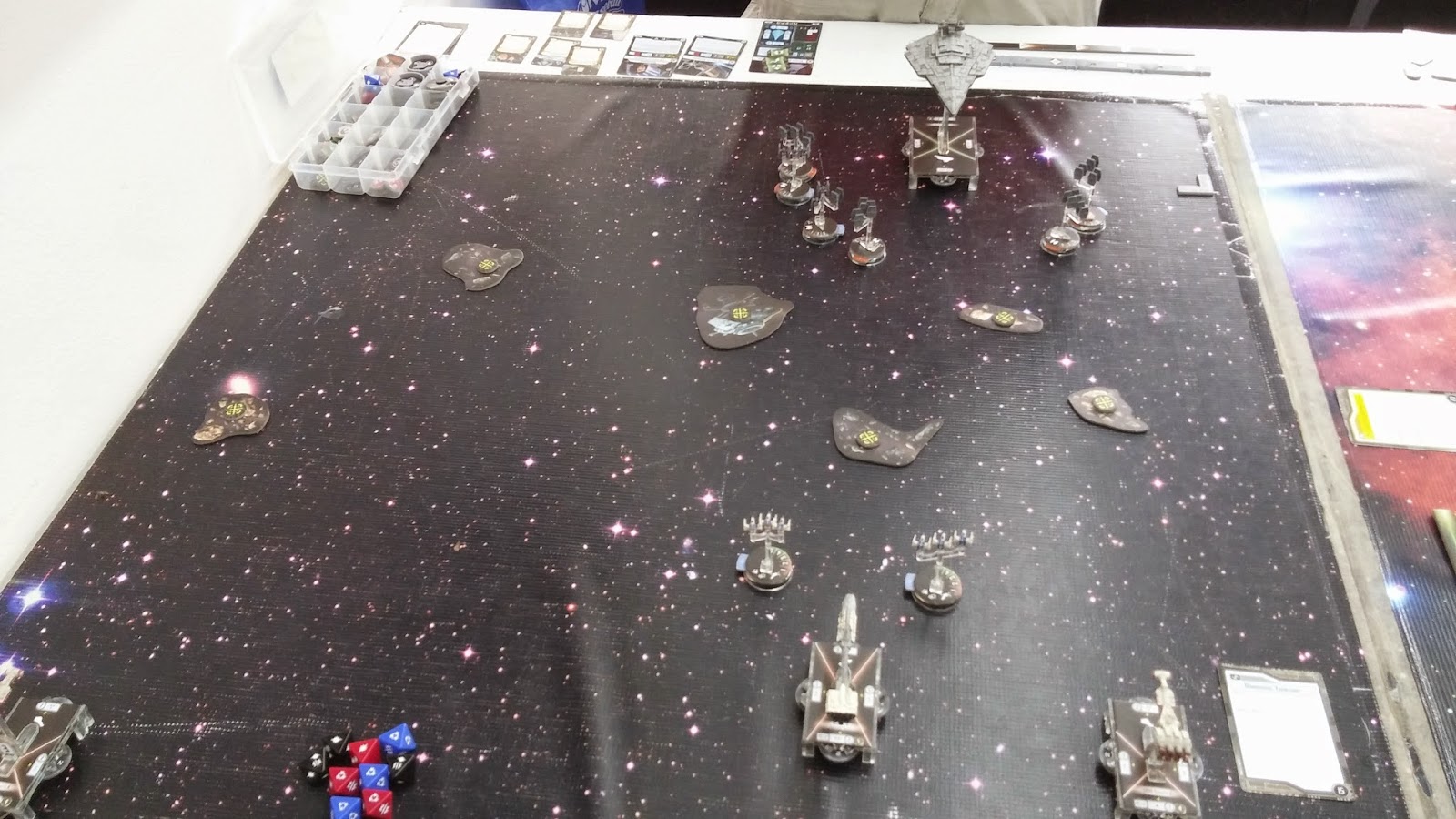 The VSD jumps into space near a Rebel outpost. TIE fighters swarmed out!

My opponent was playing an illegal list but it was okay. He brought the VSD Class 2, Howlrunner and 4 TIEs with upgrades. He had the initiative and choose to go first, choosing Dangerous Territory as our mission from my missions. He did not understand obstacles as well and this really cost him the game as his VSD got stuck on the asteroid field in front of him and he suffered badly.

As the 2nd player, my ships take no damage from the obstacles so I pushed out early to claim as many victory tokens as I can. My opponent pushed himself onto the asteroid field in front and took the victory token but the face up damage card came out to be one that deals him an extra damage card if he overlaps an obstacle. This proved costly in the end as my Nebulan B sped in front of him and forced him to stay in that asteroid field, taking 2 damage every turn. In the end, his VSD blew up just as the time limit reached and I scored a 166 pt victory.

My second game was against a fellow Rebel player who brought 3 CR90 Corvettes. His list consisted of 2 CR90 Corvette As with Enhanced Armaments and 1 CR 90 Corvette B with Dodonna's Pride. 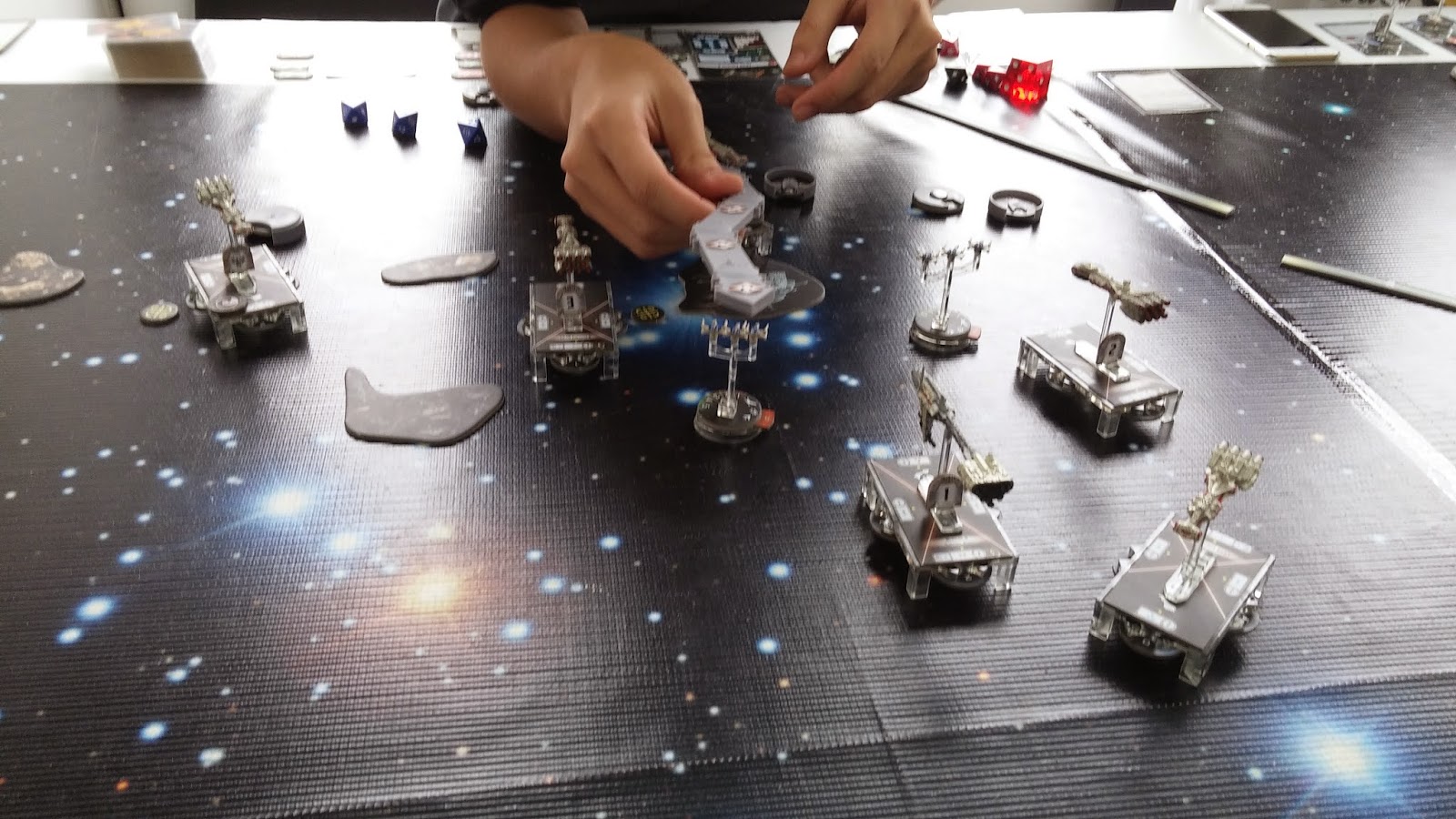 Rebel vs Rebel meant there were lots of ships swinging around. 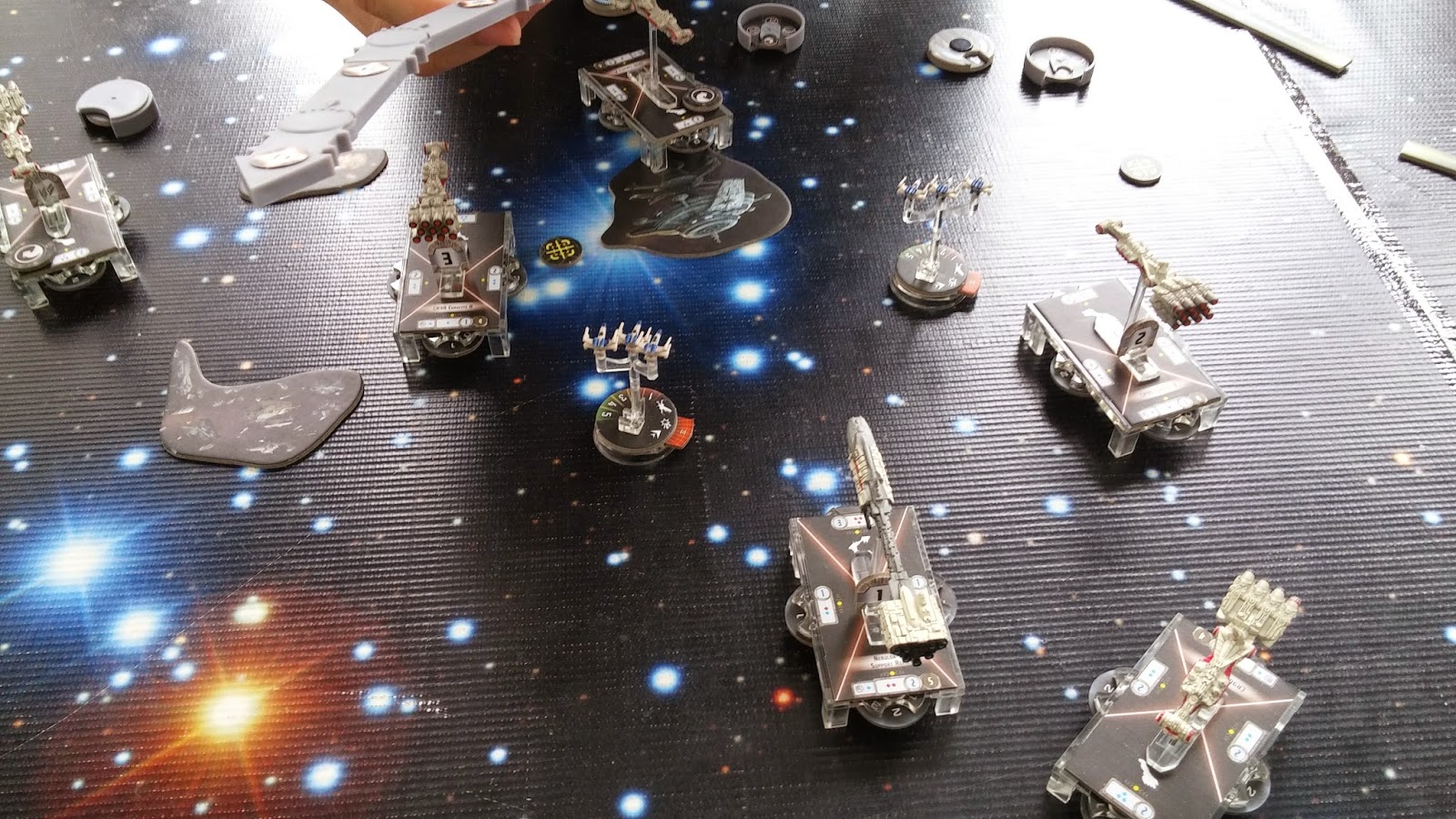 The 2 X-Wing Squadrons proved to be a nuisance to him. 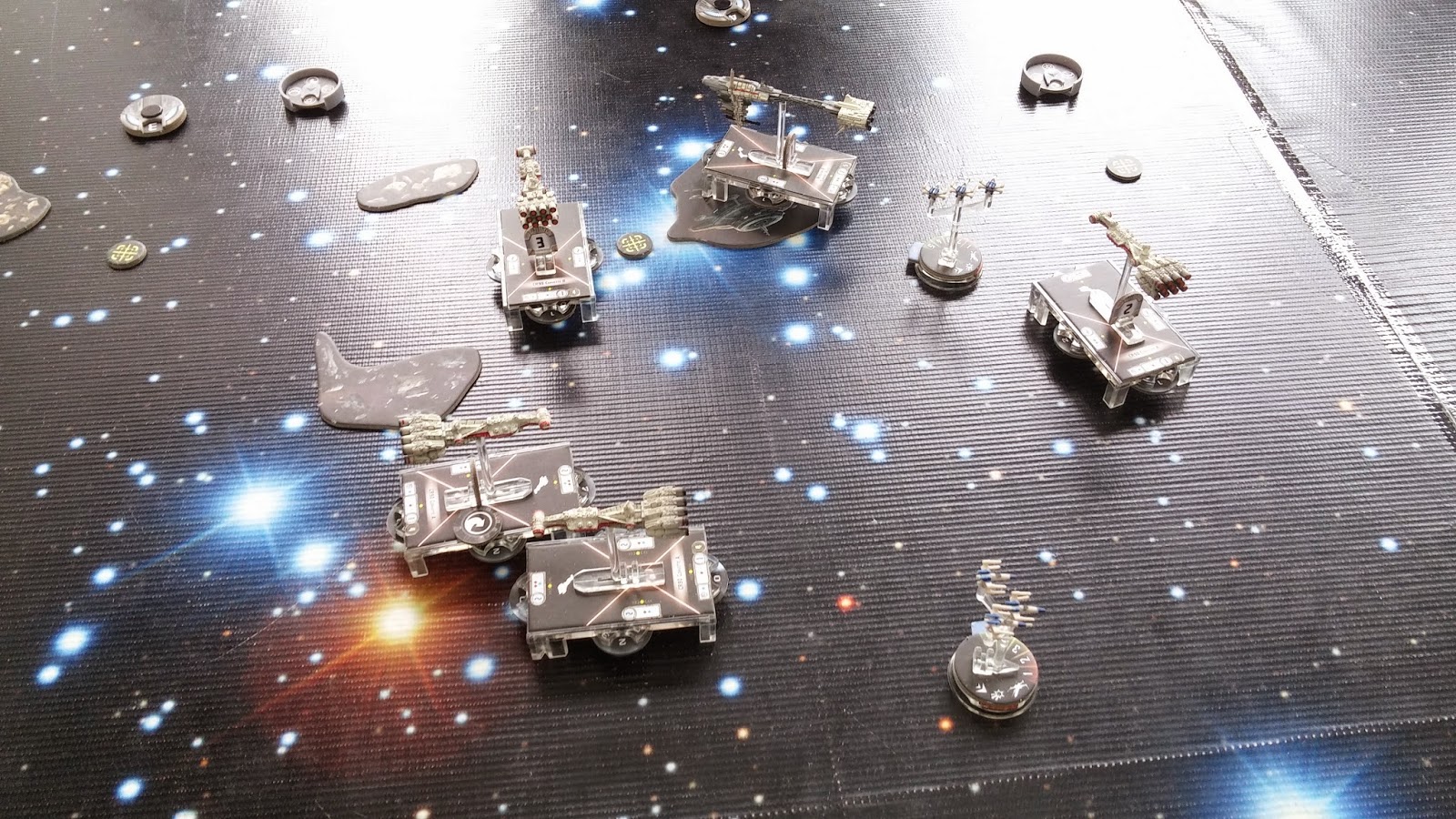 I choose Fire Lanes as he chose me as the first player. It benefited him as he had Enhanced Armaments to give more dice to the attack pool. My opponent's plans were disrupted when he realised that I outstripped him in terms of frontal firepower. The resulted in me blowing up his Corvette B through some very concentrated firepower. The X-Wings rolled pretty well, dealing a few double damage against him. He realised the danger and quickly boosted his remaining Corvettes to max speed and got out of danger. My Corvette B also blew up after concentrated fire from the side hulls of his ships and in the end, the game went down to who had more victory tokens as we ran out of time (although I was shaping up to take another of his Corvettes).

In the end, he had 1 more victory token than me but the points difference was 8 and it was considered a draw.

In game 3, I faced Admiral Benjamin in a match-up we were familiar with. I was chosen to go first and I chose Superior Positions for the mission. It was again a Rebel vs Rebel match-up. Benjamin brought 2 Nebulan B Escort Frigates as well as Luke Skywalker and 3 X-Wing Squadrons. 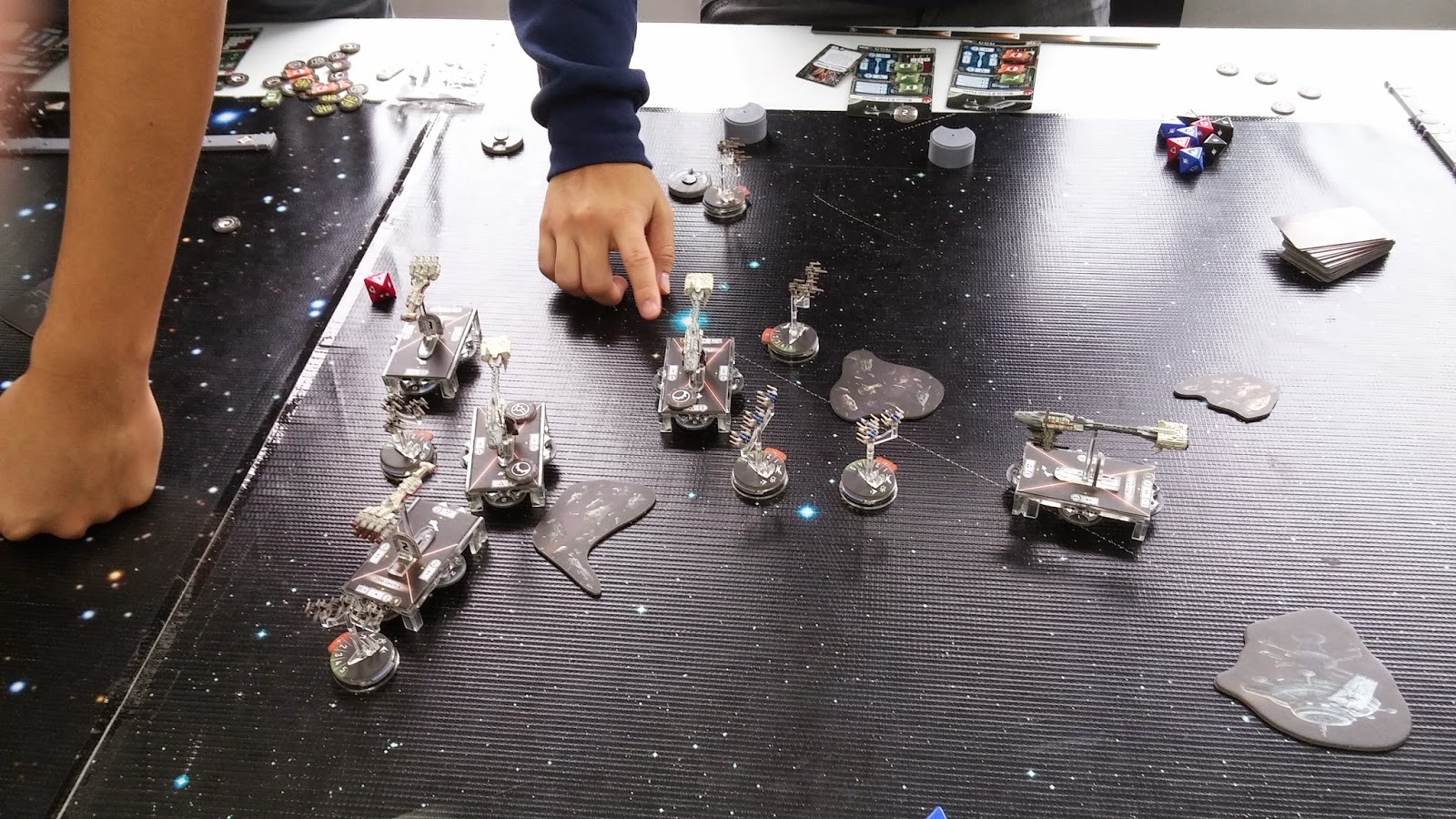 Congested field as the Rebels went at each other.

Benjamin played too cautiously and allowed my 2 ships which were going at full speed to swing by in time to threaten his 2 Nebulan B before he could take down my Corvette A. In the end i was pumping away hard on him with max firepower. His X-Wings managed to score a crit on my Corvette B and it blew up from the critical effect. But my Corvette A and Nebulan B quickly brought his Nebulan B down in exchange. The 2nd Nebulan B went down afterwards and I took the game with a point difference of 122.

In game 4, I faced the top Imperial player Nicholas who was playing a VSD Class 2 Dominator and 5 TIE squadrons. He chose me as first player and I chose the mission Contested Outpost. I ceded the Outpost to him in exchange for trying to bring his VSD down. But things did not go as plan. 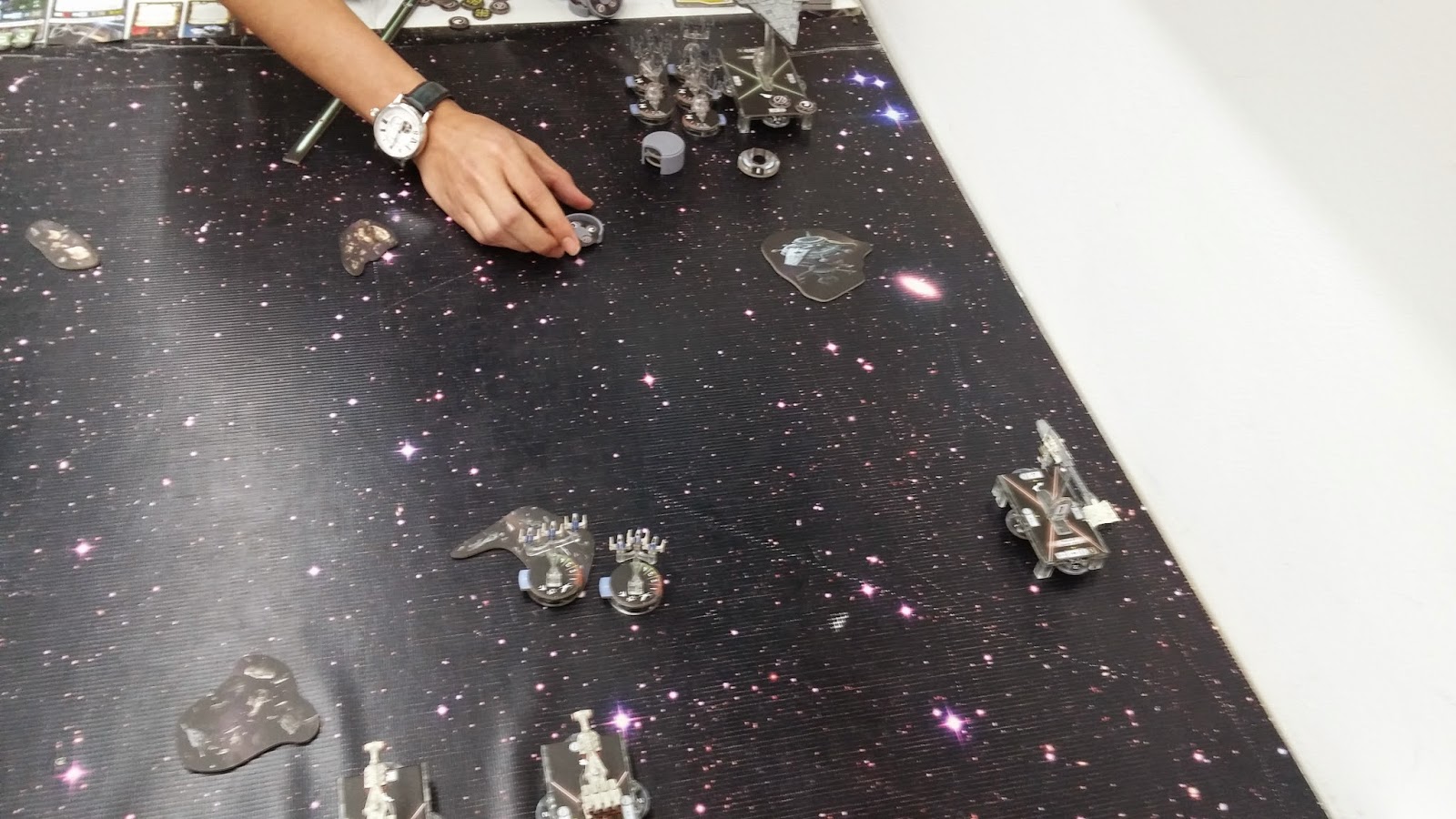 Imperial fleet setting up in the corner.

He deployed the outpost way at the side to deny me the flank. My CR90s tried to flank him but got too close to the front arc of a Dominator. In the end, my Corvette A was blown apart by 9 dices before it could register a single shot off. Things went downhill pretty badly but I managed to start dealing damage to him through the frontal arc shooting of the Nebulan B. My Corvette B died to another frontal arc shot by the Dominator but not before I kept ramming him. This resulted in both the VSD and the Nebulan B at 1 Hull Point left each. In the end, my opponent chose to ram his VSD against my Nebulan B to force a draw as the next turn my Nebulan B would rip his VSD apart. With the victory tokens that he collected, he won by a point ifference of 38 and dropping me to 4th.

All in all, I had a pretty good day and placed 4th. I would have wanted to face off against more Imperial players but Dominator still proved to be very nasty. Can't wait for the next tournament and Wave 1!
Posted by JaeRoler at 12:26:00 AM