"Many Bothans died to bring us this information." - Mon Mothma


As promised, here are the rules for the Star Wars Armada Campaign that we will be running over at Titan Games for the month of June. The campaign will kick-off on 1st June and last until 28th June where we will conclude the narrative of the campaign. The rules and details are subject to changes and I will finalise them nearer to the start of the campaign. Please bear with me as I am working from scratch.

Bria Theren pursed her lips. Sweat formed on her brows despite the freezing cold of the underground bunker. Her R4 unit noted her expression and whistled quizzically. The flashing display before her eyes held her spellbound, its contents sending every fabric of her being into sheer terror. General Dodonna must be told! Bria had managed to get her hands on parts of a tactical readout of a new "super-weapon" that the Empire was building. Even though she did not have the full tactical readout, the information that she held before her was chilling. This battlestation, that the Empire was building, was on a scale so massive, it was bigger than a small moon! As luck would have it, the Imperial shipyards at SinSang should have more information regarding this new super-weapon. Time was of the essence!


This will be a small campaign for players to play Star Wars Armada with a background narrative. All players are welcome to participate in the campaign. Any games that you play at Titan Games will affect the eventual narrative. You can play battles at any pointage as long as you and your opponent agrees. The main objective of this campaign is for you to have fun!

The background narrative for this campaign will be the Imperials looking for the Rebel Base while the Rebels are trying to steal the Death Star Plans. This fight will take place in the Raioballo Sector. 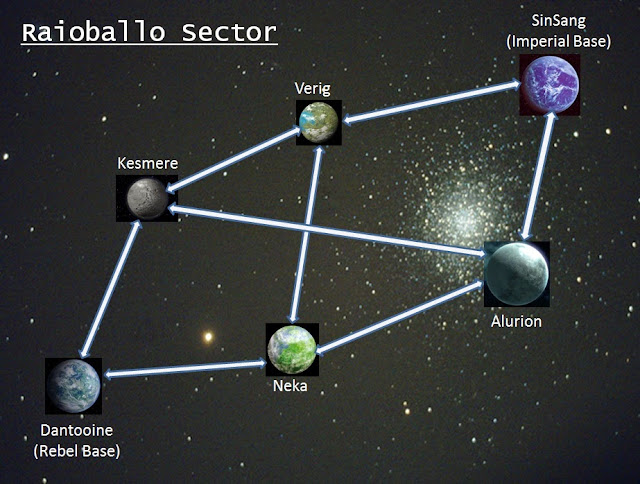 The campaign will consist of two components. Firstly, there is a campaign map as illustrated above which the players can fight over on behalf of their chosen faction. Secondly, as players play games, the points that they accrue will be used to raise their ranks in a Ladder system. The Ladder will persist through the end of the campaign and carry on to the next events.

Each system has an Imperial Loyalty meter that measures from 0-100.

If a player attacks a system and wins, the loyalty of the system will change according to the Margin of Victory. There is no change in IL if the defending player wins unless the system is one of the Base systems (this is to make it hard for a faction to dominate the entire map). (This is based off the Margin of Victory component from the Tournament Rules)

Players playing in a declared system will gain benefits if the system is controlled by their factions. Players can choose and gain only 1 free copy of the card listed for use in their fleet.
Here is the list of the benefits for each system :

The Strategic Card component is part of the campaign map and aims to reward players even if they lose the battles.

The benefits of a Strategic Card are below :

The following are the missions that can accrue Strategic Points :

At the end of the campaign, Campaign Points will be counted as follows :

The faction with the most Campaign Points at the end of the campaign will be considered the winning faction.

The Ranks and points needed in the Ladder are as below :

I do not expect anyone to reach the rank of Admiral in the course of this campaign as the Ladder is supposed to persist through the end of the campaign.

Rewards and prizes for achieving ranks in the Ladder will be finalised at a later date.

Remember folks, the objective of this campaign is to have fun!

Here is a slight update to the rules :

Everyone is welcome!
1. Be you a casual player or a veteran campaigner, just join us and play. All games will be counted towards the campaign and your ladder rank. Just let the friendly staff at Titan Games know that you are playing Armada and they will include your game into the campaign.
2. Even drop in games apply, just choose a system to fight in (You don't have to apply our benefits if you want a balanced game.) The campaign system benefits are there as something for us to fight for, It is okie to play as per FFG set up and still apply the game result to our campaign map.
3. Please declare your faction at the start of the campaign. For balance purposes, Melvin and I will sit on the fence until all players have reported in.

Please play at Titan Games
Only games played at Titan Games will apply to our campaign. They have to record the location of the system you are fighting and the Margin of Victory.

Pointage
1. There is no restriction on the pointage of the games that you are playing. However, as a general rule of thumb, we are playing 300 points or 400 points. 180 points is mainly for those playing with only one Core Set or Learning Scenarios. But with friendly people at Titan Games, you can always borrow our toys to use at your game!
2. Attacker should declare how many points he is attacking with and the opponent will adjust accordingly. But always confirm the pointage first. Remember, be friendly!

Rewards
We will be giving out acryllic tokens as rewards for the players in the winning faction. We are in the process of looking at having customised Admiral Cards for all players (Anyone good at photoshop?) who participate in our campaign.