As I am painting my Blood Angels, I keep asking myself this question: How do I distinguish each unit from the other while keeping to the Codex guides? So I started searching online and I found an impressive guide. 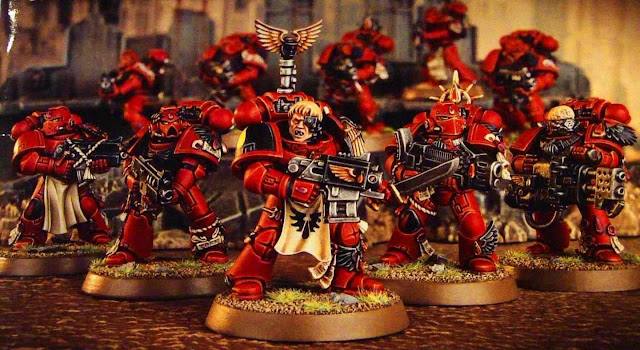 Extracted this from Bolter and Chainsword:

The Codex markings for BA are quoted below:
"The Blood Angel Chapter of Space Marines wear a power armoured suit of vermillion with yellow chest eagle. The Chapter badge is worn on the left shoulder and is black with a black edge trim. The exception is Sergeants who wear reversed colours - ie a black shoulder pad with red badge and trim. The right shoulder pad is also trimmed with black, although trim colours are often missed off or overpainted on campaign.

According to the Codex the Marine brothers' personal names are enscribed on the right shoulder pad, although this is not always followed and is more common amongst officers than ordinary troopers.The separate companies are denoted by the colour and number of blood drops on the right shoulder pad, positioned above the name plate where present. The exception to this is the 1st Co., which bears a yellow skull instead. Individual Squads are either distinguished by back banners of varying design or not indicated.

There is also a description and illustration of a 2nd Co Death Co marine,
"illustrating a unit which has taken the infamous blood oath of the Blood Angels.These Marines repaint their suits black with red crosses and deaths heads.."
The left shoulder pad is effectively the same as a Sergeant's pad, being black with red trim and a red BA winged blood drop. The right pad is black with red trim and a white skull and crossbones.
I can't see anything to show how this is a 2nd Co. Death Co. marine, or if this is just a fluff description: there's nothing in the listing to say that DC keep any Company or squad markings.

The Compilation also states that honour marks are displayed on the left knee, and Army/campaign markings are painted onto the right leg.

Coming forward to the Codex:Angels of Death, from 1996, and Codex:BA from 1998, we find a few variations. Only to be expected in a non-Codex Chapter, I suppose. As per the Codex, the current right shoulder-pad markings are:

Sergeants now have yellow BA symbols on a black ground, rather than red on black. The Company badge is also now on a black ground: the trim isn't listed, but is illustrated as being red. I would imagine that 5th and 9th Co sergeants have a red ground, as black on black wouldn't work.

Individual squad types within a Company are identified by their helmet colour:

You'll notice that neither book lists any 10th Company colours, which might imply that appropriate camouflage is used. Codex:BA, however, states "Blood Angels scouts are taken from the most fiery individuals in the Chapter: battle-eager warriors who hunger for close combat", which might lead one to suspect that BA would rather not wear camo, prefering the psychological advantage of hiding in the bushes wearing bright red?
And if anyone can tell me why the "battle-eager warriors who hunger for close combat" aren't in the Assault squads I'll be pleased to know. Maybe there's a jump-pack shortage or something...

The only other points of note for this guide are that the elite squad markings are defined:

And now we move on to the 2004 "How to Paint Space Marines", which clarifies some things and muddies others, in typical GW fashion.
As far as colour scheme changes, the black border on the shoulder pad seems to have been dropped altogether, although this has been done before as a "Campaign measure".
But the main change appears to be that the chest eagle is now black, rather then the prescribed Codex yellow. All the Marines shown, HG, Tac, Dev and Assault, are shown bearing a black aquila. There is no explanation for this in the text, which seems odd for such a major change.
Oddly, the known BA successor chapters all retain the yellow aquila: the Angels Encarmine, Sanguine and Vermillion, and the Blood Drinkers. The Flesh Tearers retain their black and red scheme, but I'll let someone with more knowledge of the FT cover them.

It also gives a breakdown of the complete Chapter organization, which is in line with the 2nd edition Angels of Death codex.

Note, as far as Chapter organization, Blood Angels are identical to Codex Chapters except that their 1st Company includes Veteran Assault squads in addition to Veteran squads and Terminator squads.
Posted by Anything But Ones at 4:41:00 PM