Sam has just completed some work on his Wraithknight. Look closer and you will spot something interesting within the cavities of this model. 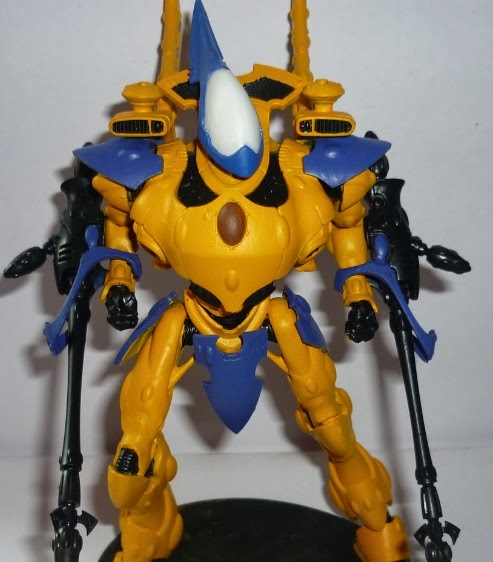 Sam: Its been a while since I posted stuff. I did basecoat my Wraithknights sometime back. I just had time to put on some layers of paint onto the model. The Wraithknight above will be painted in the colors of the Iyanden Craftworld. Very slowly I might add haha! The model is huge! And i'm still getting used to the angles in painting it.

Another Craftworld...Another Wraithknight...
I mentioned before in a previous posts that I'll be re-organizing the majority of my Eldar miniatures to the Ulthwe Craftworld. I've also written up a fluffy list for it which I'll post later. Basically lots of Guardians and a new toy, The Wraithknight to look current ;)

Below is the WIP Wraithknight for my Ulthwe Craftworld. I'll also detail some lessons I learned from assembling the model. 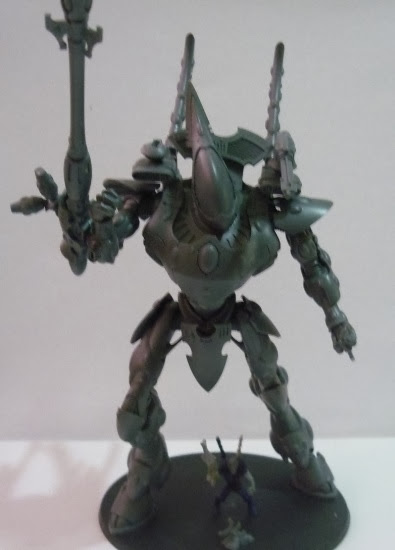 I decided to glue the arms on in a pose that can take the twin Wraithcannons, Sword and Shield as well as the Suncannon and Scattershield. I think the arms can be magnetized without any issue, however, with the addition of the weapons, especially the Suncannon, it can be a bit heavy. 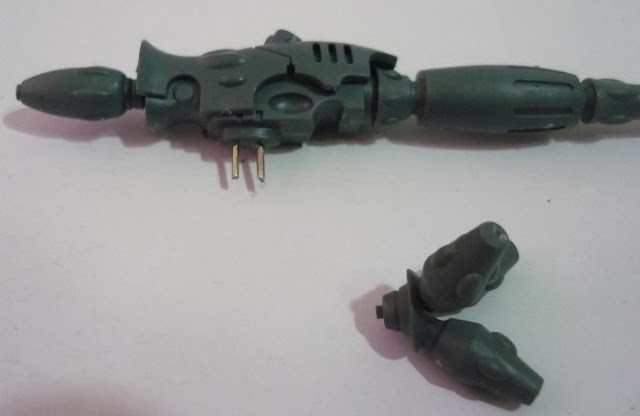 So I chose pinning as a way of attaching and switching the weapons. Above is the Suncannon I pinned. 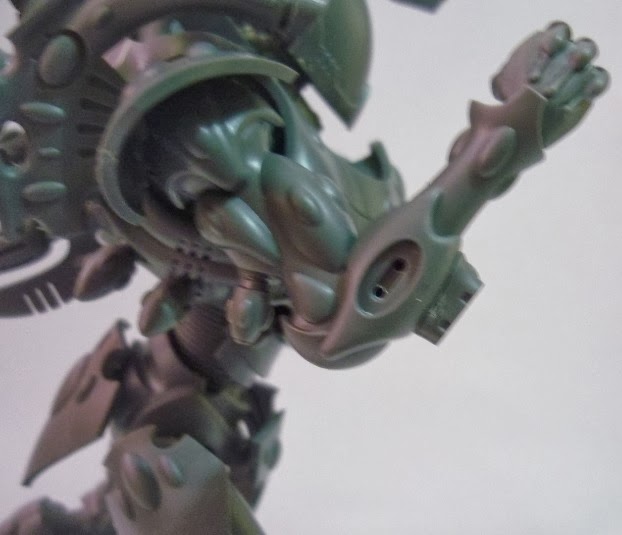 Above are the corresponding holes for the pins in the arm of the Wraithknight. It fits snugly and holds together well. 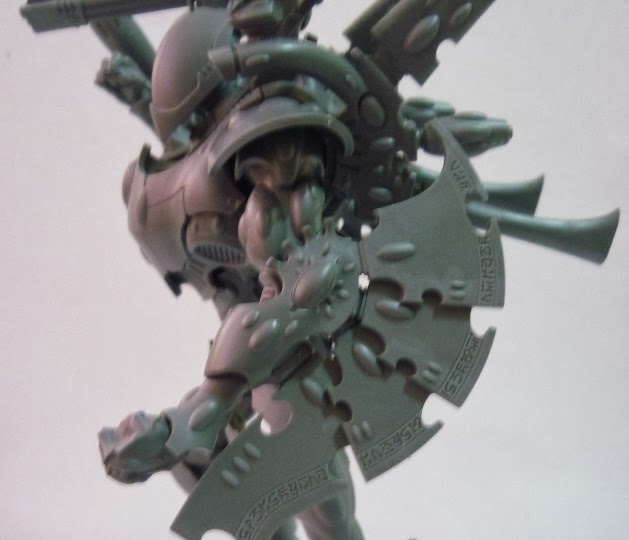 For the Scattershield, there is part near the hand that has to be glued on the underside of the forearm. I wanted to still be able for him to wield the Wratihcannon though. 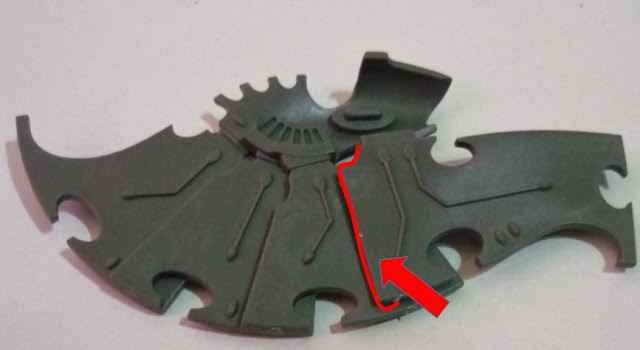 So I just glued the lower shield to the main piece indicated by the red arrow. This way, you will be able to attached the Scattershield onto the arm, without any glue or pinning required. 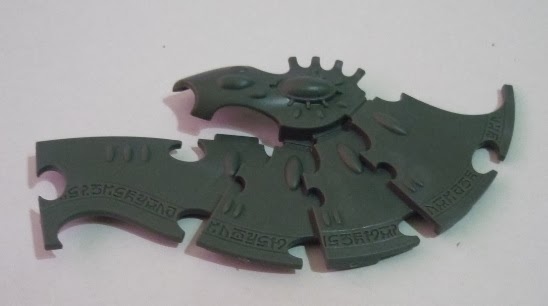 The pic above shows the front of the Scattershield, with lower portion glued together. This becomes one piece that you can snap onto the forearm pf the model.

Wraithknight Pilot
I had wanted to place a pilot as I was inspired by the fluff that the construct was powered by the psychically attuned minds of Eldar twins, one dead and one alive. To this end, I did some modifications to the chest cavity of the Wraithknight. 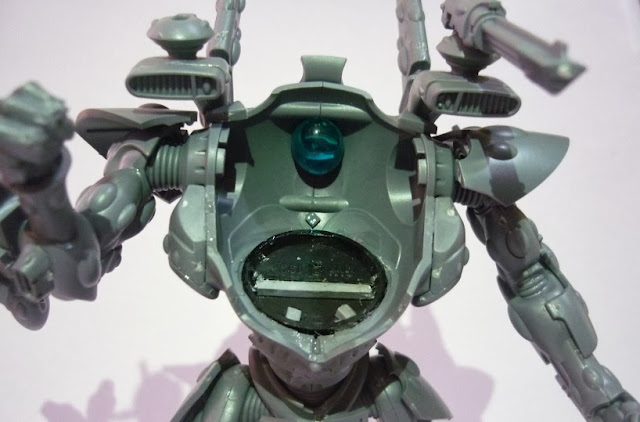 I cut away the round concave part that connects the body to the waist. I placed a standard 28mm model base to cover the hole. This acts as a base for the pilot. I attached a plastic gem to the back of the interior. Coincidentally, it fits into the same location as the Eldar symbol on the outer back of the Wraithknight. 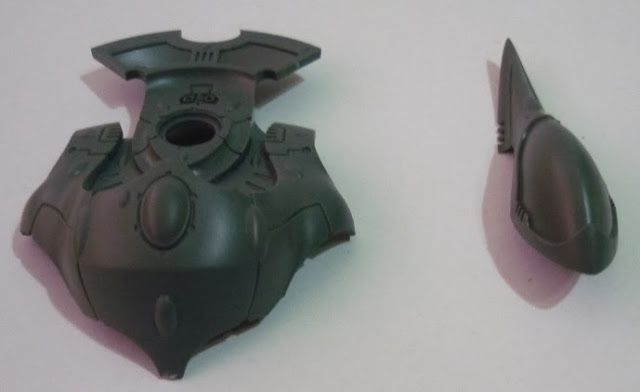 I glued the chest piece to the upper headmount. It works well and slides into the main model really well without need of pinning or glue. 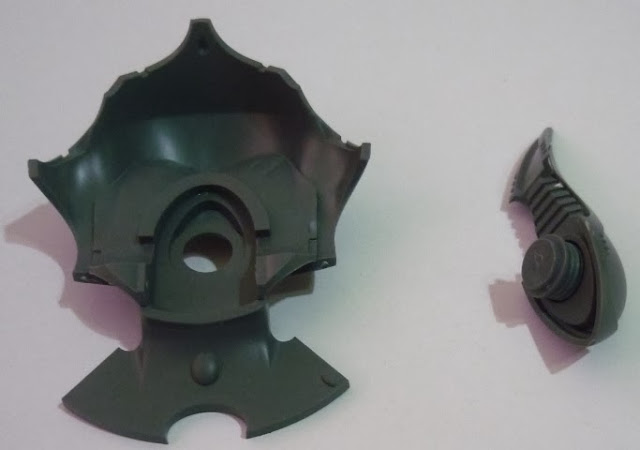 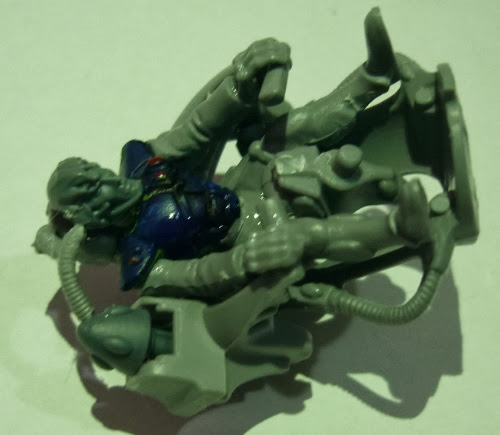 I assembled the pilot using bits from a spare Eldar Vyper I bought about 10 years back. I added the Guardian body and new Dire Avenger head to the model. 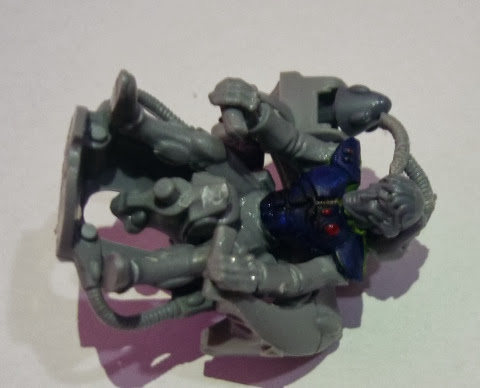 Before gluing this piece in, you just have to ensure it is bent in position so it fits into the chest cavity. 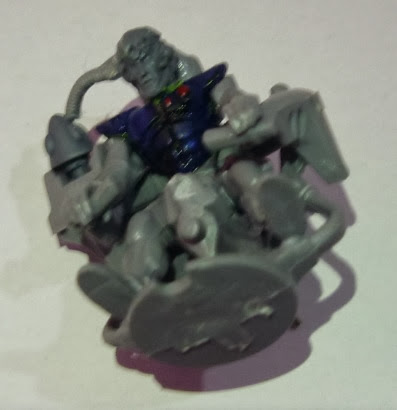 I cut off some of the plastic cabling from the bottom of the chassis and glued it to the pilot's head area to simulate his communion with the construct and the spirit stone of his dead twin located just behind him. 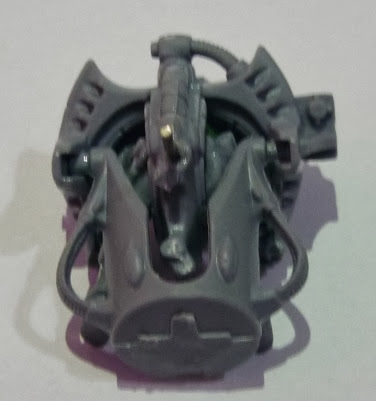 I added a pin to the bottom of the 'seat'. This allows me to remove the pilot to paint up if needed. 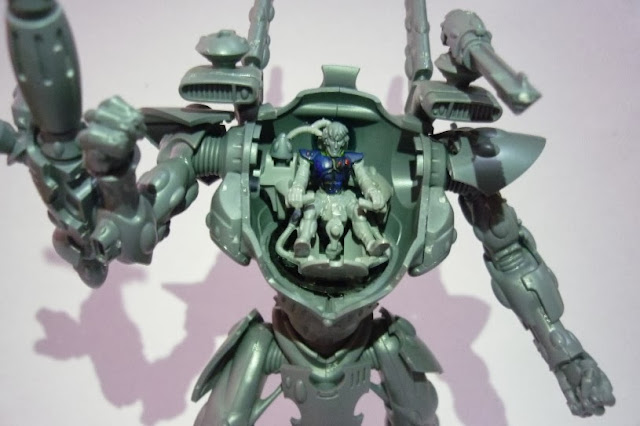 The Eldar Wraithknight pilot enjoying his new home. Because the chest piece had to be able to slide out to reveal the pilot inside, I could not glue the shoulder pads onto the main chassis. 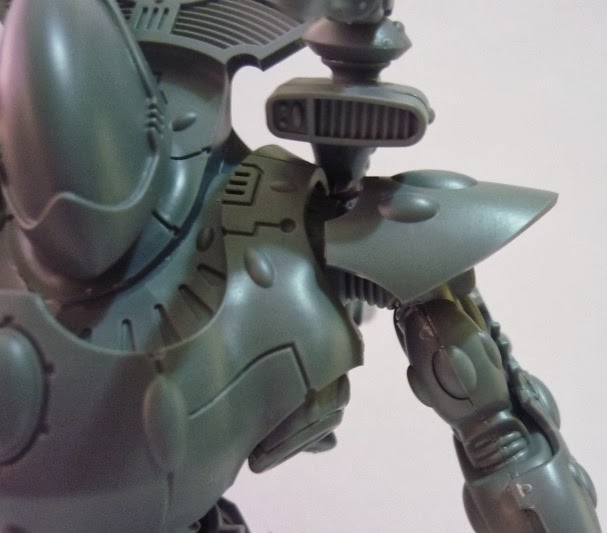 I kinda got around this by gluing the shoulder plates to the shoulders itself. It still looks good, and gives the model a slightly broader shoulder profile. 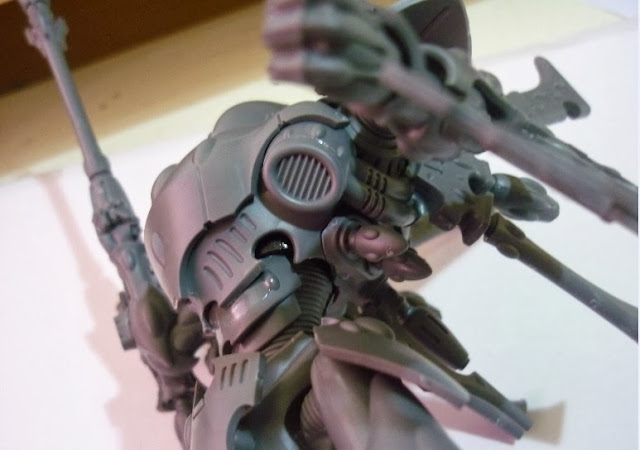 I forgot to take a picture of how I attached the body to the legs. Basically you cut off the rounded portion of the connector of the waist to the body. This is because the underside of the body is not longer concave but flat. 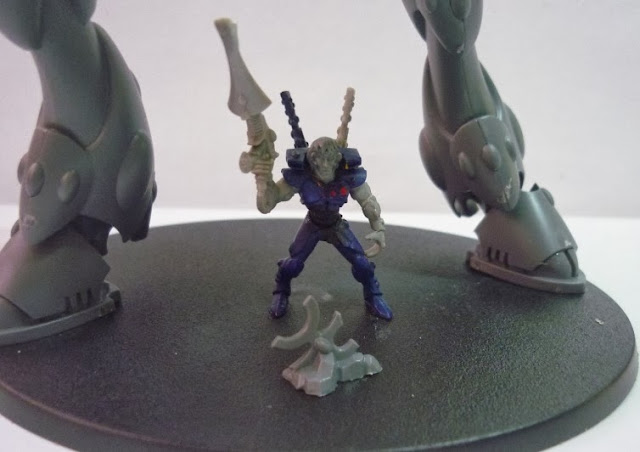 I also added an Eldar posing in the same manner as the Wraithknight at the base of the model. He will be painted in a ghostly, ethereal color scheme. This will be my representation of the ghostly appearance of the dead twin whose spirit is housed within the giant Wratih construct. A good theme for the base would be a dead or deserted crone world with some spirit stones scattered on the base. This represents the Wratihknight in the Hunt for Spirit Stones.

Eldar Spirit Stone Markers
Speaking of Spirit Stones, I have also made some markers for objectives to go with the army. 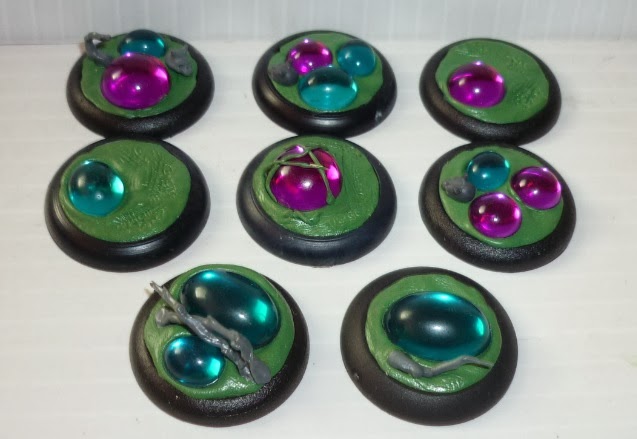 I basically just greenstuffed the interior of the base and pushed in the plastic gems into it. Added some plastic tree branches from my Wood Elves bitz. 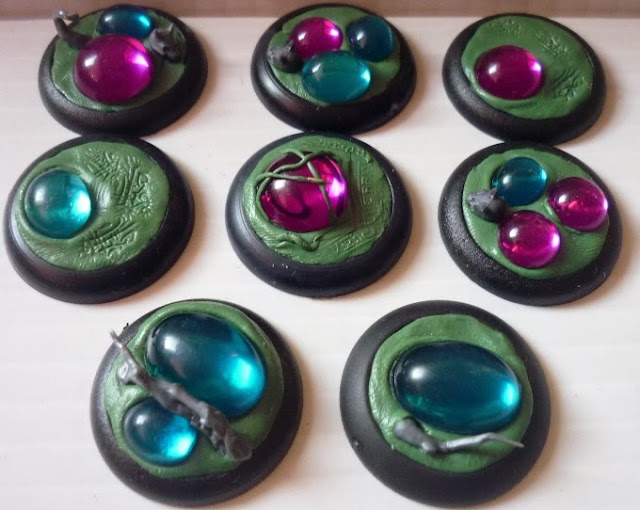 I used the corner of the Wraithknight Scattershield which has some mysterious Eldar writing and pressed it onto the greenstuff base portion. If you look closely, you can see some Eldar script on the ground part :)

I'll probably prime the entire marker and paint the gems later. However, you can also attached the gems later after the base is primed and painted if you like the unpainted look of the gems.

I hope everyone has had a great week. Here's wishing all a Happy Valentine's Day and weekend.

I leave you with a quote from the novelist and playright Marge Kennedy. May you all have joyful and memorable quality time with your loved ones and family.

"The informality of family life is a blessed condition that allows us to become our best while looking our worst."- Margaret Kennedy
Posted by Anything But Ones at 2:25:00 PM