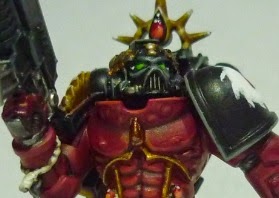 I finally had a game this weekend at the local game shop Titan Games. It was blast! A very close game which saw us both just throw our units in charging headlong into close combat. My opponent was playing the new Khorne Daemonkin and it was exciting throughout. 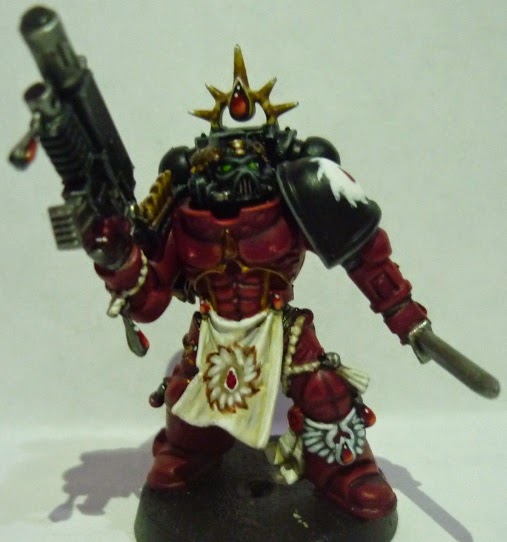 I decided to give the Vet Sarge a quick lick of paint for his efforts. He put the deciding shot which felled a mighty Chaos Lord. Who unfortunately turned into a Bloodthirster! I painted a symbol on his tabard to remember his heroic act. The tactical squad next to him did not appear too pleased with result of the Chaos Lord's demise. 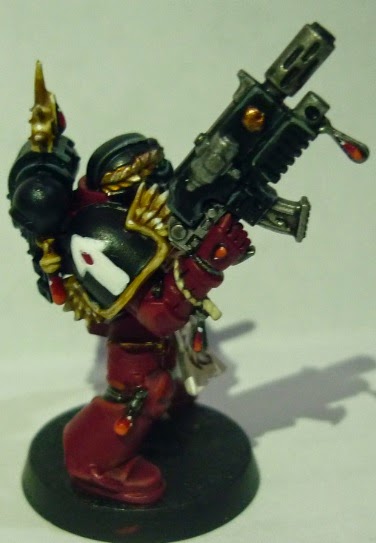 He is armed with a combi-melta which delivered the said shot to the Chaos Lord. But he did spend the next few turns capturing the objective and surviving all the incoming shots. 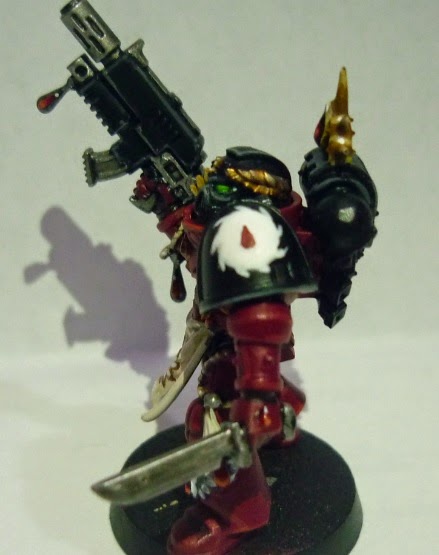 The Flesh Tearers symbol proudly displayed now on his left shoulder pad. He keeps his combat blade at the ready for when he gets stuck in glorious close combat. 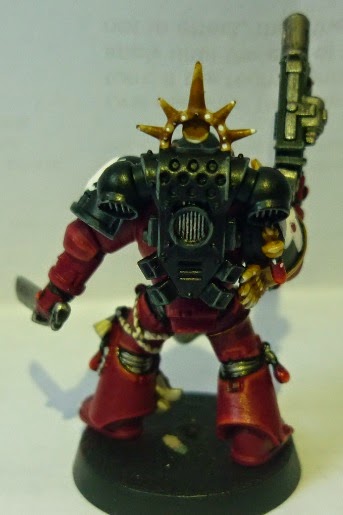 Again this model is from the new Blood Angels tactical squad box set. The details once painted does give a lot more substance to the miniature.

Here are some pics of the battle: 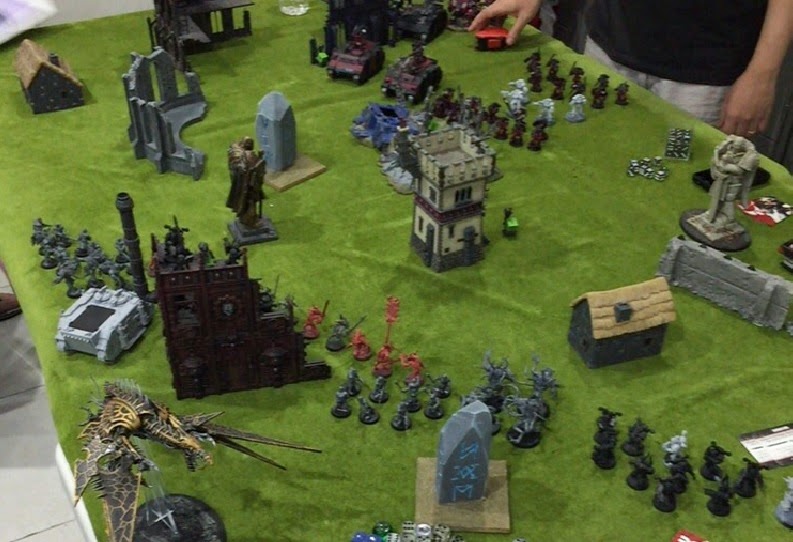 This was the deployment on Turn 1. I had not played in a while and am not able to remember the mission. It was a diagonal deployment and there were 5 objectives. I had first turn and there was no night fight. 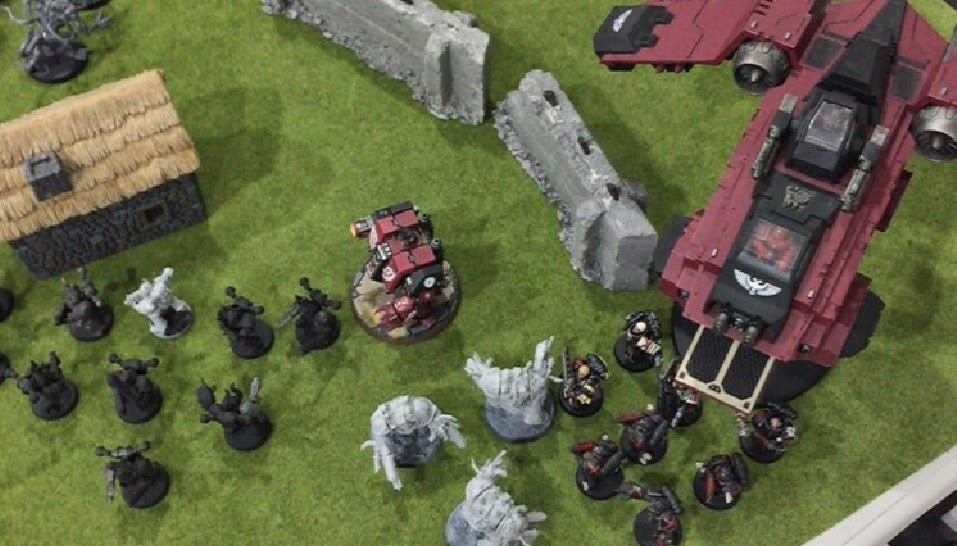 Above pic is my Storm Raven arriving from reserves and disgorging the Death Company and Furioso Dreadnought. They would later wreak havoc amongst the Obliterators and Chaos Space Marines squad. 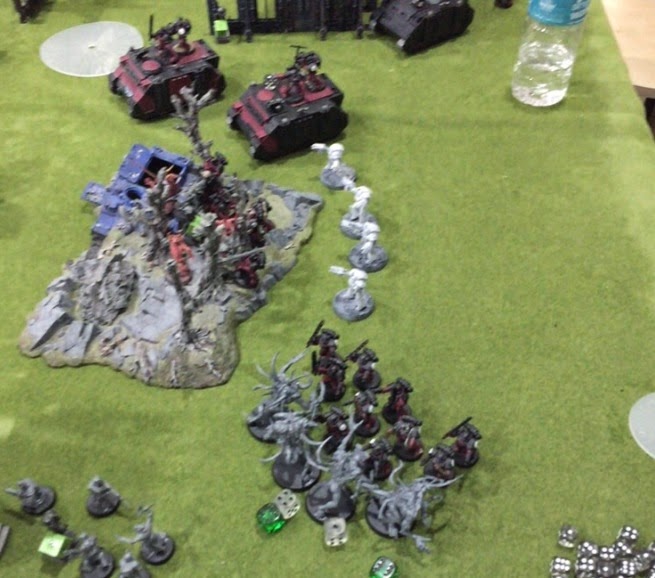 Above pic is Turn 3 I think. The Chaos Spawn had engaged my Assault Squad with the Cultists close behind claiming an objective. 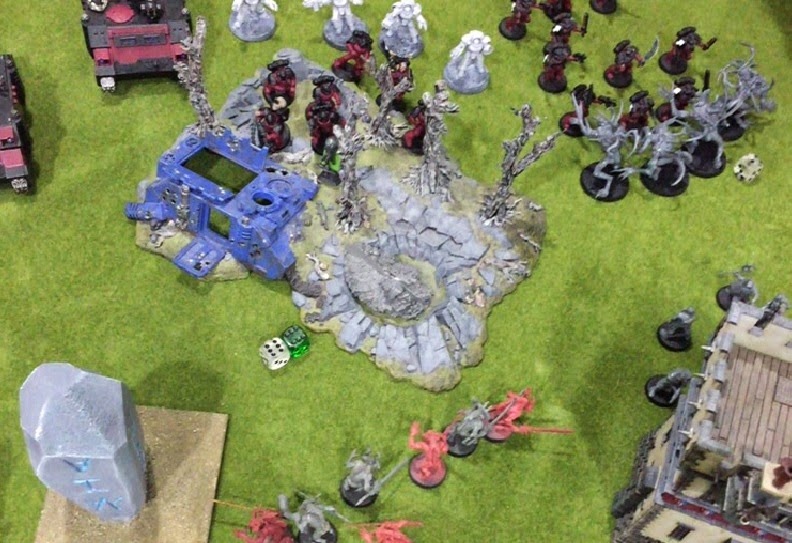 I think this is still the bottom of Turn 3 with the Bloodletters also closing in. Pict recordings stopped at this point as the clouds turn a crimson red.  Khorne's power blotted out all communications as his Blood Tithes increased to new heights! The later appearance of a Bloodthirster was a bowel clenching moment for me. Only sent it back to the warp after shooting AND assaulting everything that could at it. I shudder to think of 2 Bloodthirsters appearing on the field at the same time.

Well, that's all from the weekend for me.