The swarm has been hurting over the past few weeks. The swarm is not able to push through the living metal prey to the actual prey. The larger beasts were dying to yellow arcing lights. It was time. Through the aeons, the Hivemind has kept its biggest and most powerful evolution in check to prevent the unnecessary use of biomass. It was time. The hive ships would unleash the Queen. Bedecked in bio-symbiotes and bristling with mutations, the Queen was unleashed on Asphodex. The hunger can wait no longer. 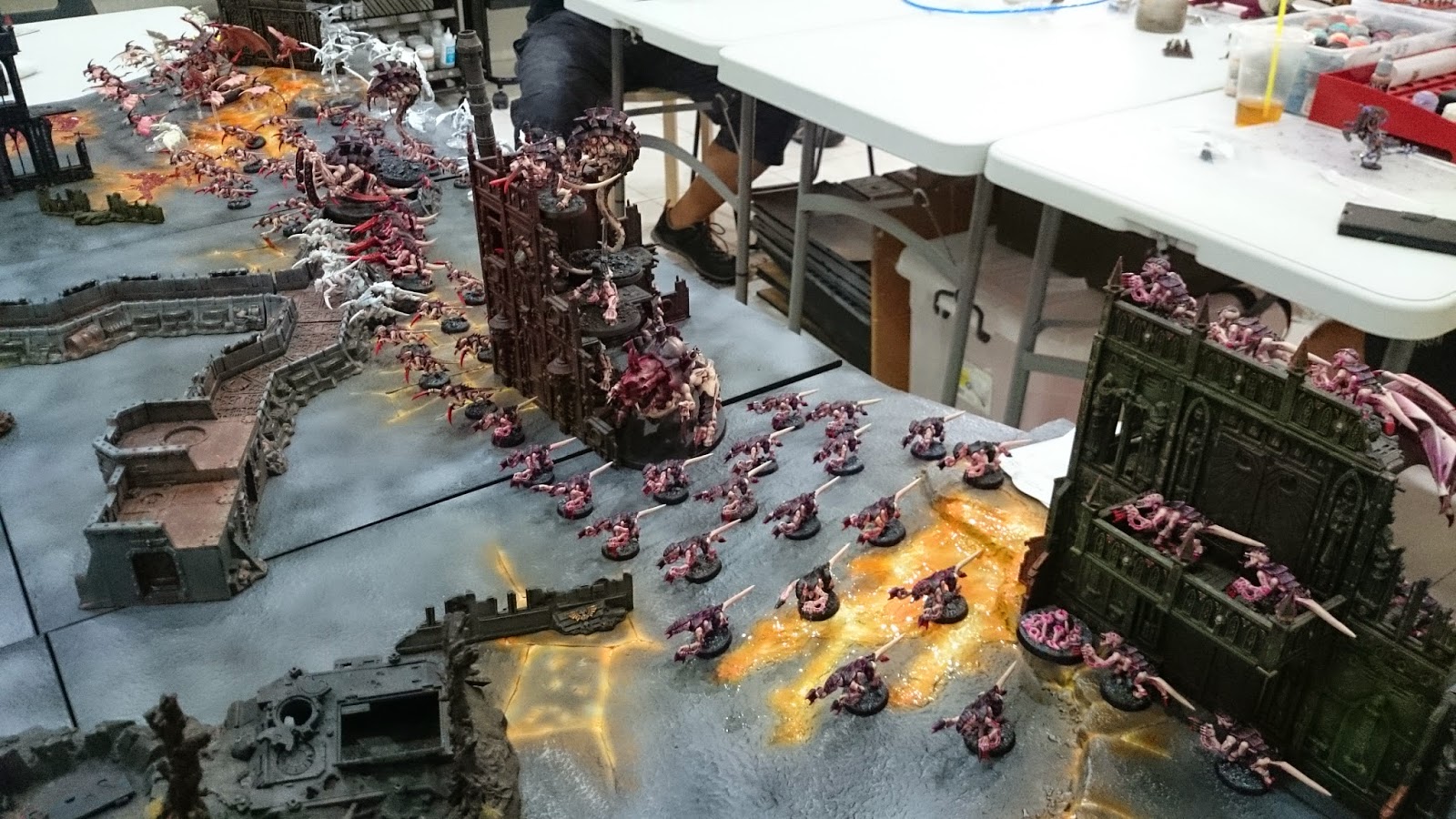 As the armies converged, the Servo Skull quickly captured this pict-feed before a shot from the Necron lines took it out.

Managed to get a game in with Henry for the Shield of Baal Week 5. The mission required the Necrons or Imperials to capture the 3 points the Tyranids set up on their side. 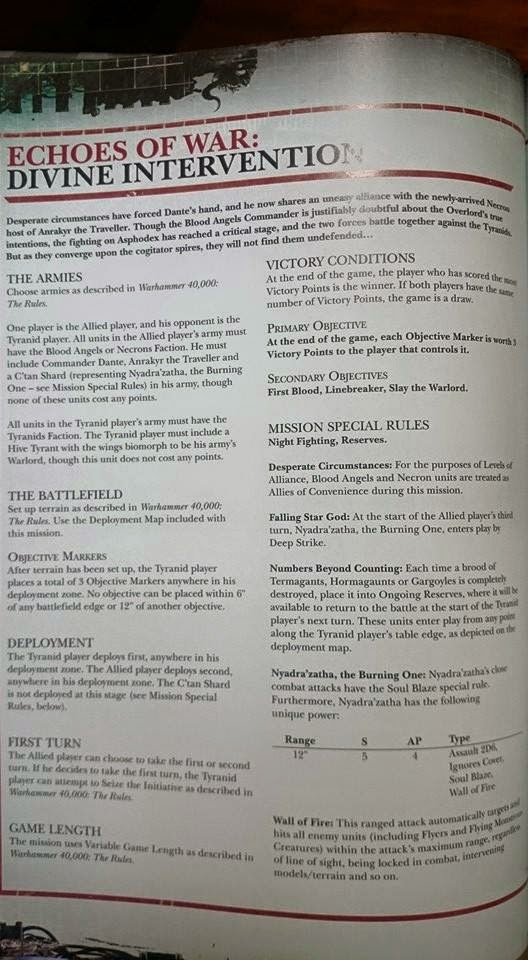 Knowing that I had to hold objectives and was basically given a free Flyrant, I pimped mine out with almost every weapon I could. I ended only using 2 weapons though! The Obliterax and Twin Linked Brain Leech Devourers. The other upgrades did come in handy though, especially the Adrenal Glands and Prehensile Tail.

I would also get returning Gargoyles, Termagants and Hormagants so I pumped my army full of them without blunting my attacking force. This was my list:

The Queen was given a flock of Gargoyles to mask its presence. The Hivemind wanted the prey to be caught in a flurry of attacks and then have the Queen lop off its head. Henry brought a different list from Jason. His was more durable with the Decurion and heavier use of vehicles. This was his list:


Necrons had the choice of going first and took it. I gladly let him have it.

The floating prey had guns that negated the Malanthropes' shrouding cloud. It had to be brought down. The Queen opened up and tore them all down from the sky. No one would disrupt her brood.

First Blood went to the Tyranids

The skies were filled with high pitched whining. The prey were sending in flying metal beasts.


The prey were predictable. They react as prey would. The swarm will continue to push forcing the prey to make hard decisions.


The Butcher had rents in its carapace. The prey were concentrating all their weapons on it to bring it down.


The Queen was playing its role. As the prey lost more resources, it would only be a matter of time before this old adversary fade back into the stars.

Turn 3
A bright spark lights up the skies. The Hivemind shies away from this spark. In its deep dark mind, it recognized that spark. It was from a battle far away. In a time long gone, in another system not akin to this. The Hivemind recoiled. It was the C'tan shard Nyadra'zatha. It burns!

The Hivemind knew that this Nyadra'zatha would be the end of its swarm if it was allowed to keep its wall of fire up. The Queen needed to take it out.

Bounding forward on muscular limbs, the adrenal glands in the Tyrants body started pumping profusely to power the monstrous creature. Hurling itself into combat like a spear, the Queen started hacking away at the star God. Tough as the star God was, the Reaper of Obliterax chewed through its Necrondermis, first chipping then slicing through it. Using every part of it's body, the Queen's prehensile tail whipped back and forth seeking rents in the star God's dermis. As they fought, dust clouds formed. The Gargoyles could not keep up and were only an irritant to the star God but that was sufficient. The Queen found a chink large enough in the star God's armour and lopped off its head with a loud THUNK. In a show of spite, the star God exploded taking out a few Gargoyles.


Turn 5
The Hivemind reeled when its most prized creation fell to the green arcs of lightning. However it was amused that the Queen was able to pull down a star God, albeit a minor one. Now was the time to push the swarm back on. With a synaptic call, it unleashed the swarms. From the skies, from the ground, they all came.

Game end notes:
There was little that the Necrons could do. I basically had the option of bringing on another few fresh units that he killed. As long as Henry was not able to kill off my entire army in one turn, I would bring the Hormagants, Termagants and Gargoyles back on. It was hilarious.

The free Flyrant (Queen) was amazing. Granted no one would probably take a pimped up Warlord like her but she was able to take out anything she came in touch with. The upgrades worth taking are definitely the Reaper of Obliterax, Adrenal Glands and Ymgarl Factor. These stack to make it a true CC beast.

It was done. The prey were moving back towards their metal pods. Knowing that they would only serve the Hiveminds' hunger by lingering, the prey pulled back. Asphodex was now in the Hivemind's grasp. The other
Posted by Anything But Ones at 9:57:00 AM