Introduction:
I have been collecting Tyranids since Warhammer40k 3rd Edition came out. It was to serve as counterpoint to my elitist army, Eldar. The large broods of Gaunts, fearsome monstrous creatures and Starship Troopers sealed the deal. This Army Profile is a work in progress where I intend to place pictures of completed models - each army profile has a permalink on this blog effectively serving as a blog within a blog. These completed models will basically come from the Tales of 6 Gamers that I am running.


Troops
Termagants: The beginnings of the swarm. These 10 were painted part of the first Tale of 6 Gamers challenge. Am very pleased that I have completed them to a high enough quality level for the grunts they are. I chose Spinefists back in 4th Ed not because it was powerful but because it looked more feral. 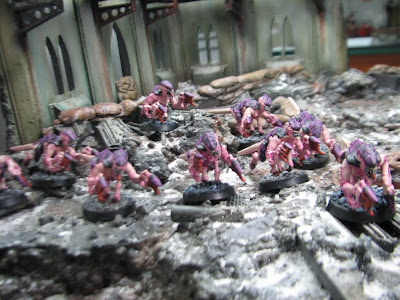 Tyranid Warriors: One of the best models in the Tyranid range in my opinion. Jes Goodwin did a very good job with the proportions of these models giving them an aggressive look. In fact, these models were painted first as my test models prior to the Gants above. While these are armed with the Deathspitters, I am planning to create another brood with Wings and Boneswords. 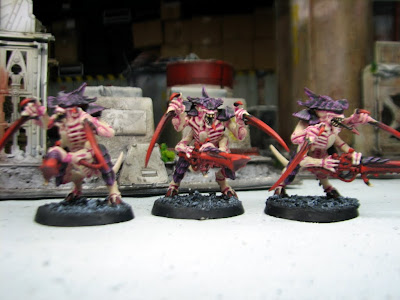 Genestealers: With the improvement with the plastics and rules in the codex, I just could not help but include them in my army in the droves. For bigger games I tend to take 2 broods just to scare people. However, I would hazard spending too many points on them as they tend to be expensive points wise! Toxin Sacs is a good choice with them as they allow rerolls. 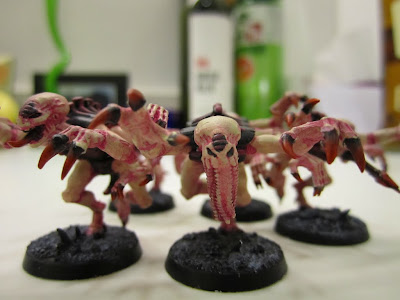 Elites
Hive Guard: Another brilliant sculpt by GW. I just love the chunkiness of this model and it's big gun! It was such a pleasure to paint these guys with their over the top weapons, claws and of course no EYES! A must have for this edition of the Tyranid codex, their main strength lies in the ability to put down 2 very precise shots per turn each at BS4, Str8. Perfect for taking out biker mobs (T8 instakill), Raiders and anything with an armour of less than 12 (4+ to Glance). I never leave home without at least 2 broods of them (either 2:2 or 3:3 depeding on pointage) 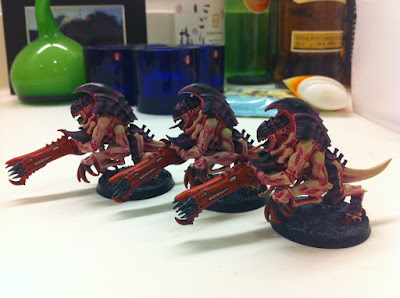 Heavy Support
Carnifex: Beautifully sculpted model. While this model is armed with two sets of Scything Talons, it can swap those arms out for other weapon options as they are all magnetized. The rules for the Carnifex has been toned down to make for the introduction of the Trygon into the Nid list. I have been using the Fex mainly as a proxy for my Tervigon until GW actually makes the model. 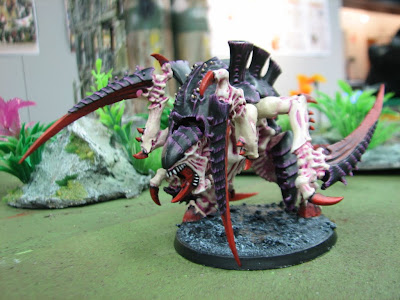