this is my virgin post on ABO. Decided to start easy and share the fluff piece that I wrote up for the month 1 presentation.

Amid the ruin of an old hive city on planet Shechem, Boss Nob Badrux sat amid his group of boyz where they were squabbling over their recent battle bounty from their skirmish with a group of strange ‘elf-dar’, led by one called the ‘Weeping Willow’.

As Badrux thought back, it was a strange battle with the strange pixelated elfdar darting through the doors and popping up amidst his boyz. Definitely very sneaky.

There was a roar of delight among his camp, as one of his grots, Skarz, was waving his lucky grot blasta, and telling those around him who would listen (mostly his own fellow grots), how he killed the ‘Weeping Willow.’

Badrux knew the truth however, as even as the battle ended, he spotted the ‘weeping willow’ pick himself off the ground and dart back through the portal with his fellow troupe.

Whether did Skarz really did kill the ‘weeping willow’ and other characters, no one knows for sure, he’s claiming the kill anyway and letting everyone know he did! 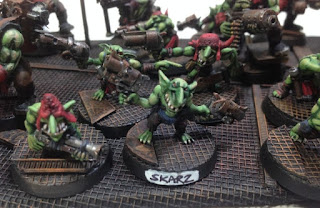 Noir was a regular ork boy except that his armour got stained by an exploding oil squig and somehow the colour never changed back. This distinctive colour difference, means he ends up being ‘volunteered’ for the scout and infiltrate missions, including the over night stay at “Titanz Gauntz’.

*Post Month 1 note: The Blood Axe klan warbosses have taken note of Noir's actions and might have a role for him in their kunning yet brutal Kommando squad!


‘Wotz dey after?’ he wondered and more importantly he wished that they would ‘bring bigger gunz next time!’

His attention changed as overhead in the night sky, high above the planet, a whirlpool vortex of light appeared, signalling a ship emerging from the warp. A space hulk full of goodies (and baddies!) on board!

Almost immediately a messenger grot ran up to Badrux telling him his liege, the warboss wants to gather all the boss nobs for mission to loot the space hulk!
Posted by Unknown at 1:13:00 PM