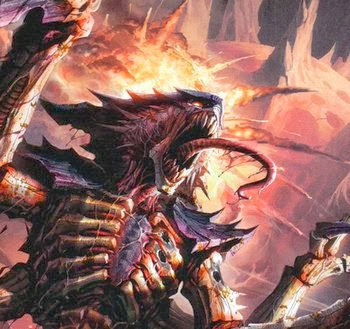 This Warrior is the face of the 6th Ed Tyranid book
Taken from BoLS:

Primaris: Dominion: blessing, +6" synapse range for the caster
Catalyst: FnP for caster and unit, and another unit in 12"
Paroxysm: ???
The Horror: ??? - Broodlords have this power
Onslaught: ???
Psychic Scream: 1 charge, Nova 6", Each target takes 2d6+2 minus its Ld wounds without cover nor armor saves.
Warp Blast: 2 charges, Witchfire, same effect as now.

Old One Eye: In the WD report is regenerating like crazy.

Crone: S:8 VECTOR STRIKE, potent missiles (those funky bug thingys on it's wings in the pics) and it even comes with an additional flamer template weapon.

Zoanthropes come with Psychic Scream, and Warp Blast as standard

Haruspex has the ability to magna grapple vehicles and enemy troops.

No Doom, Parasite, or Mycetic Spore!

Then in almost a response from Naftka to BoLS, here's something interesting:

via Endobai on Warseer
With the dam broken I am satisfied with my work and can use recently gained (un)deserved fame and glory for the benefit of humanity elsewhere.
I'll start with the benefit of one human, namely myself - which unfortunatelly takes time and effort.

Since I cannot afford answering all the PMs (sorry guys, but a dozen? Have mercy.) I will go through this single post.

You must understand that disproving fakes sometimes takes more time than writing something, even in enigmatic (living in the city where the Enigma was broken helped) Alpha Legion/Eldar style.
I am not a Tyranind player and each time I have to check the (still) current Tyranid codex to see if I make a mistake which would no doubt haunt me for the eternity in the endless depths of the Internet.

Recent rumours, most likely from 4chan are mostly valid, but there are fakes coming from more... creative sources.
Some might be still spot on, so I will only discuss those things I can confirm or deny easily.

Endobai responses are bold italics
1. Synapse gives eternal warrior
Not proven yet.
Seems a good deduction considering the price of the Warriors which remains more or less unchanged, but so far I have no solid confirmation.

2. Gargoyles are troops.
Cannot confirm that. FOC changes via HQs are possible, but right now just a speculation.

3. Trygons (primes), Carnifex, Hive Tyrant, Tyrannofex, Venomthropes have significant point decreases
True. Values are posted elsewhere, cannot tell if all are accurate, but in general there is a point decrease.

4. Zoanthropes come with Psychic Scream, and warp blast as standard
Nothing supporting this. I said some creatures are assigned specific powers and in this case it is a prime candidate, but right now I cannot say a definitive yes.

5. Brain leach devourers no longer strength 6
6. The Crone has a massive vector strike
Don't remember, but both are quite likely.

7. Tervigon, Warriors, gene stealers have significant price increases
Warriors and Genes stay the same, upgrades are either cheaper or more expensive, but the basic cost is identical.
Tervigon is more expensive, by about a nude Warrior cost.

8. No Doom, Parasite, Spore pod.
Cannot say for sure, but no confirmation they are and no traces of their presence I could find.

9. The big cannon bug has two different firing modes, one being a D3 Large Blast and one being multiple high strength, low AP shooting attacks.
Have no idea why it is supposedly D3. One concentated large blast with Ap2 and S7 or six lesser shots (six barrels).

BTW
Interesting bit. The gun is the brain of the creature, the grinning imbecile below is just the muscle useful to allow the brain to calculate all those things it likes and no doubt design subtle works of surreal art from the splattered remains of the enemy. Think Master-Blaster from 'Mad Max 3'.

10. Hungry eyes bug has the ability to magna grapple vehicles and enemy troops.
Nice, but pure speculation so far.

Will have access to BRB powers.
No reason to disprove it now or earlier.
Posted by Anything But Ones at 2:59:00 PM