40K Narratives On the Battlefield

Its been quite an eventful week with much happening at work and the wife going for an operation. All has turned out well, and its just been a tremendous relief. Anyways, I did remember a conversation with Ray (aka enrgie) about combining our Tyranid forces for a battle. This sparked off a tangent for me as I kinda imagined how awesome it would be to do it Aliens-style ;) 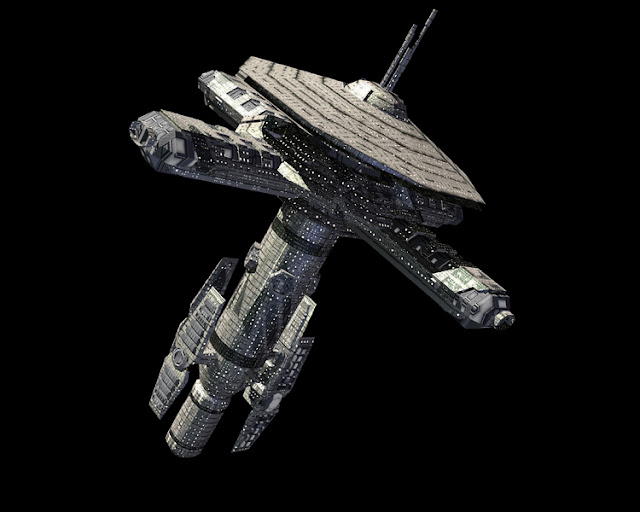 I used the existing 6th Edition Missions to play around with a narrative battle. And this is the strange result of my mind.

The narrative and victory/loss conditions are made from the perspective of the Space Marine rather than the Tyranids due to my lack of understanding of Tyranid psyche lol!

Missions Used (all from 6th ed):
Crusade
Purge the Alien
Big Guns Never Tire
The Scouring
The Emperor's Will
The Relic

Chapter 1: Into the Breach 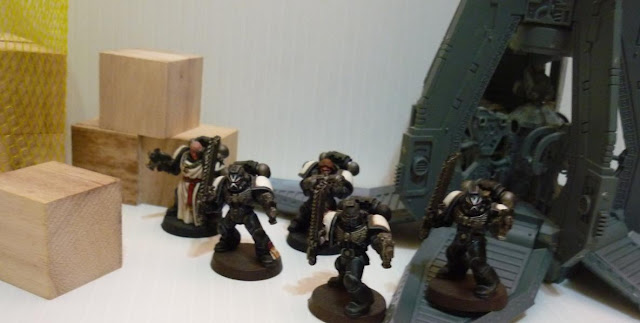 The Black Templars make entry into the Halicon via a breach in the lower decks and arrive using Drop Pod insertion.

Mission: The Emperor's Will
Synopsis: Your forces have made entry into the Halicon. You need to establish a beach head for further reinforcements to arrive.

Mission: Big Guns Never Tire
Synopsis: Having established a secure base, your forces reinforce the staging point with formidable weaponary.

If Loss
Mission: The Scouring
Synopsis: Your forces may have failed to secure the staging point. But fortune favours the bold as your remaining forces use speed to secure remaining viable staging areas for the coming battles.

Chapter 2: The Jaws of Death

Terminators of the Dark Angels find themselves surrounded by foul xenos while trying to recover some information from the Halicon's logic stacks.

Mission: Purge the Alien
Synopsis: The alien menace is now fully aware of your presence. They come for your strike force in vengeful bloodthirsty waves of teeth and claw. Blunt their attack and make the enemy fear your might.

If Victorious:
Mission: The Relic
Synopsis: Within the ship is an artifact of great power and of xenos origins. You must secure the artifact for you sense it will aid your cause.

Note: In the case of The Relic, maybe the artifact would really contribute to in-game usage. Like increased WS for the squad in possession of it, for example.

If Loss,
Mission: Crusade
Synopsis: You have lost the artifact...for now. You will need to retreat to more defensive positions and secure supplies for your wounded. You also inadverdently stumble upon a monstrous evil. 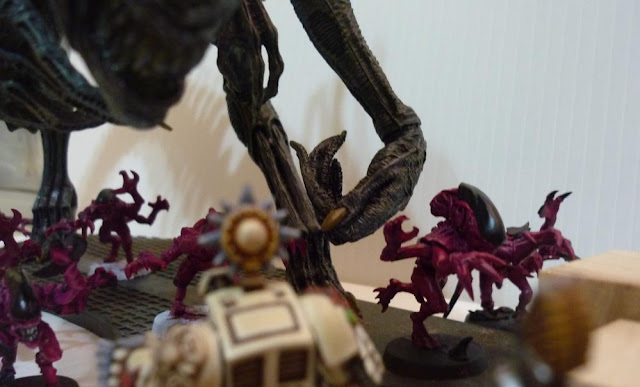 Note: The final battle is always expected to be a dramatic one. And its ok to add some interesting rules and creatures/ characters to reflect its conclusion.

Note: You can also add Special Rules into the narrative to give it that added challenge.

Prepared Assault
Tyranid Organisms able to Infiltrate or Outflank can do so on any terrain piece. They can also assault the turn they come into play if they pass an Initiative test.

Without Number
As per the rule. Troop choices can be recycled. Coming in at random table edge next turn if destroyed in current turn.