Those who have been following the blog would have noticed that I have been practicing and preparing my Tyranids for an upcoming tournament. I have been a bit cagey giving out too much information regarding my list and my opponents' army lists for fear of revealing too much to my potential opponents prior to the tourney. Now that it is over, here is the full blown list! 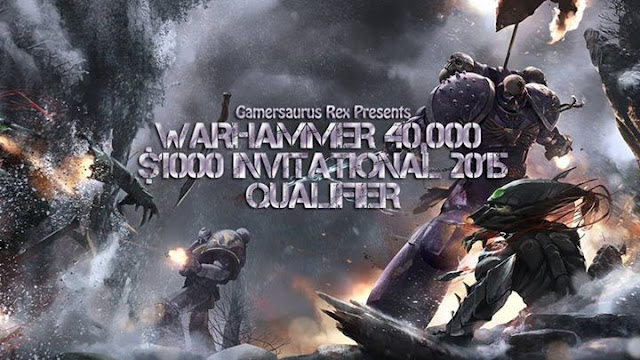 The original list contained the Living Artillery Node but after playing with the boys during practice matches and based on how the games went, I changed the list to improve it's ability to hold objectives. Pat was the one who suggested that if I wanted an objective grabbing army, it has to have all 6 Troop choices full.

We were handed the tourney pack and the missions were interesting. I will cover them off with the corresponding opponent and picture. While my first opponent was deploying, I went around to take pictures of my other sparring buddies, Marsh and Alan.

Going in, I prioritized units that was easy KP. Having played Henry, Jason and Patrick in the past, I was aware that Necrons are hard to kill due to their Reanimation Protocols. With the Spyder in the midst, I would be hard pressed to kill them off early. Ignoring the Wraiths, I prioritized for the Bloodletters who are T3 with a 5++.
During deployment I kept my Warlord in the middle of the table. My Warlord Trait would come in really handy, +1 to my opponent's Reserve Rolls. This eventually prevented his Night Scythe from appearing in the game! Then again, one of my Carnifex failed to turn up as well as the game only got to Turn 3.

Taking the First Turn, I flew my Flyrants midtable and opened up on the Bloodletters hidden in the middle ruins. After 24 shots, the Daemons were no more. First Blood and 2KP for the Tyranids. When Henry revealed the first Mysterious Objective in the centre of his table, I choked for a bit. It was Skyfire and he had 10 Necron Warriors sitting on that Objective! Opening fire, I had to save 5 times or go down blazing allowing the Necrons to charge other things in. Rolling the dice, I saved them all!

From here on I managed to take down another Bloodletter unit for another 2KPs, get Ascendency and Overwhelming Firepower. Scarabs tried to charge but in a shower of power, my Carnifex managed to kill them off with Overwatch scoring another 2KPs!

When my Carnifex came in his backlines, I managed to dakka dakka his Spyder and my Hive Guard took out the remaining Tomb Blade. I managed also to score Objectives 1 and 6.

We then arranged our armies out on the tables for the TO to judge Best Painted. These are the armies that were present on that day. Most were WYSIWYG but some were playing with models not 100% WYSIWYG. Looked like the TO was quite lenient with the rule. 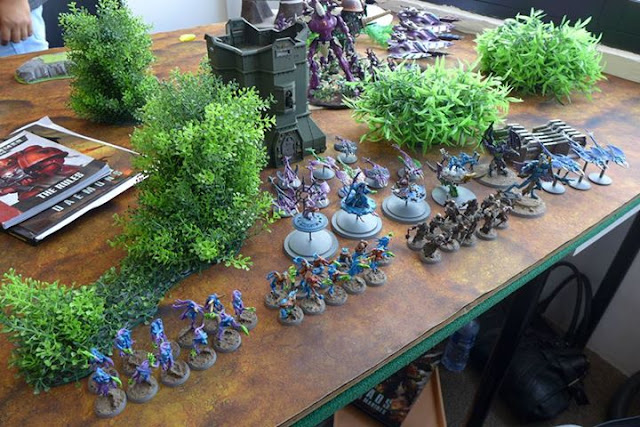 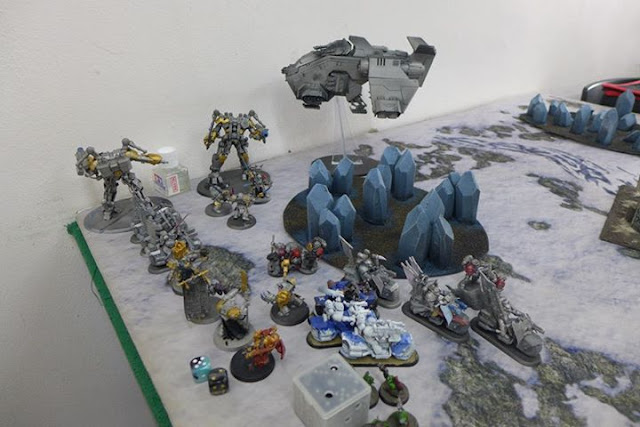 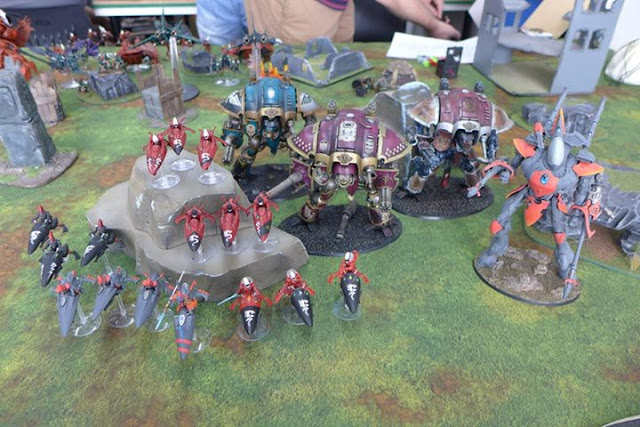 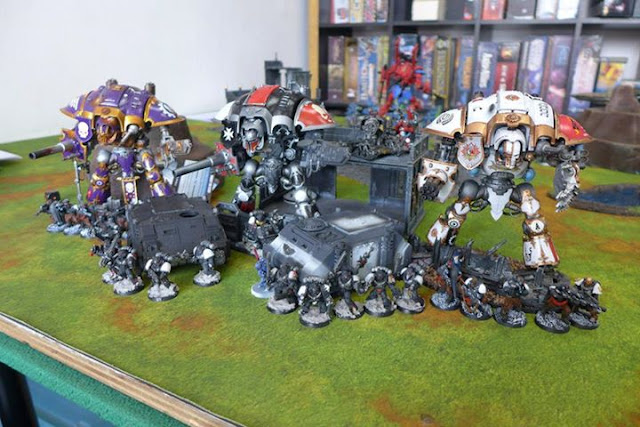 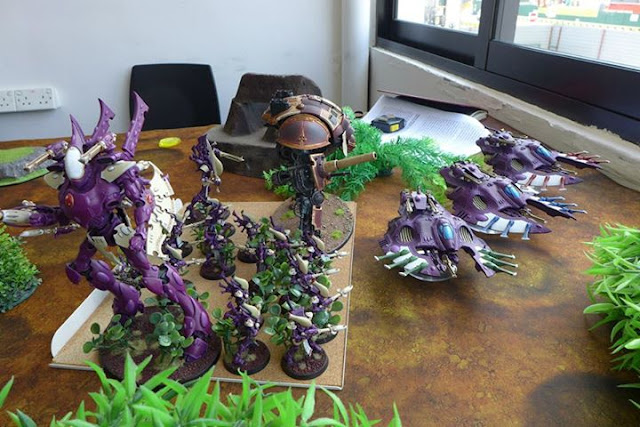 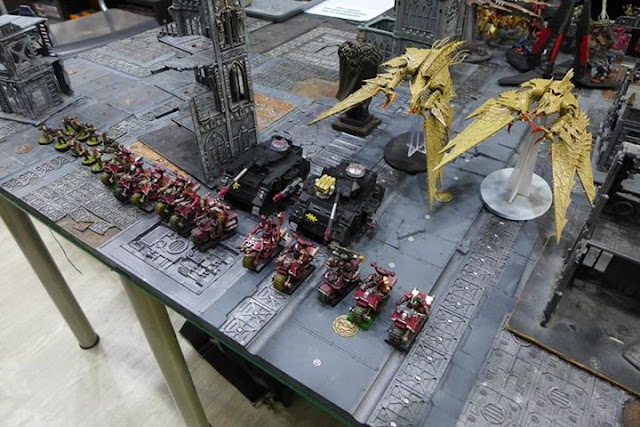 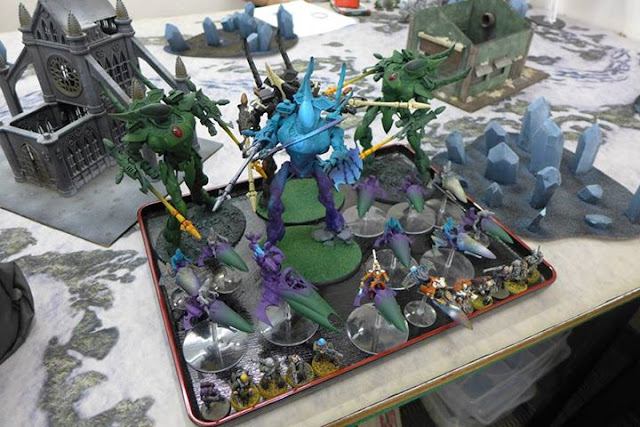 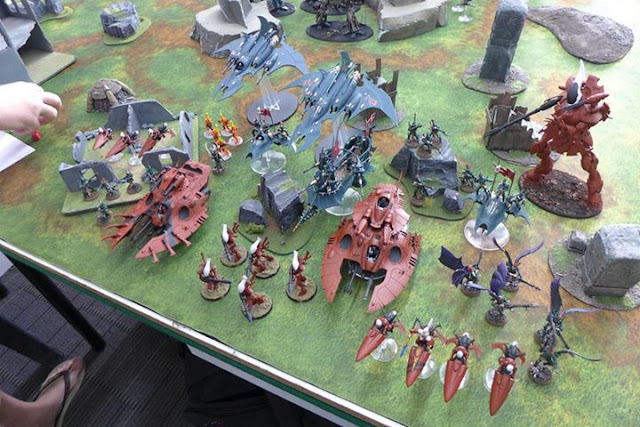 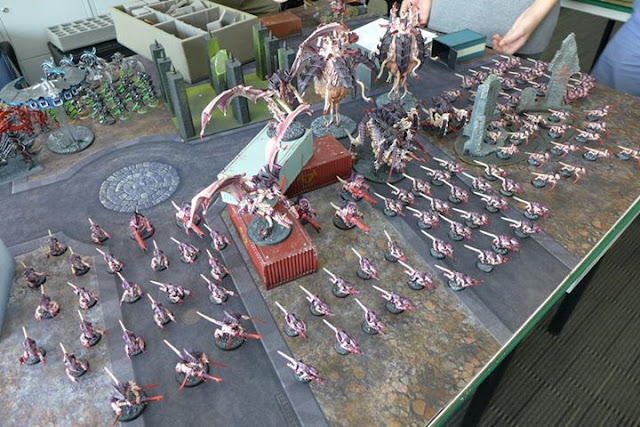 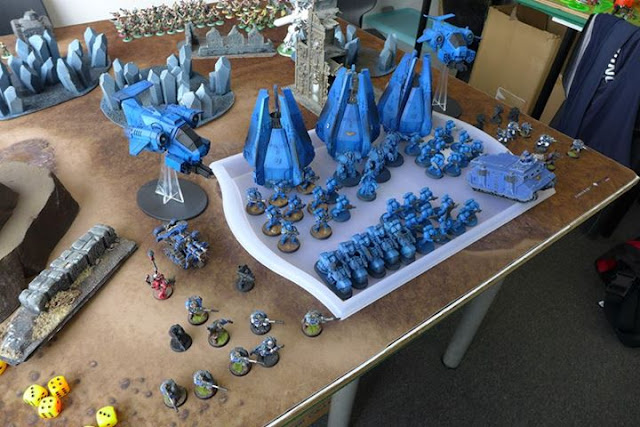 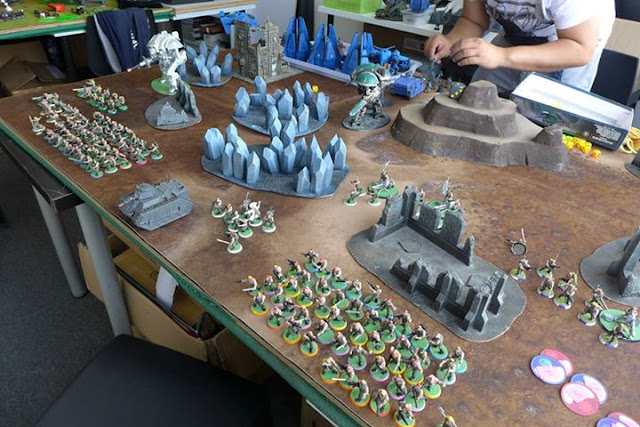 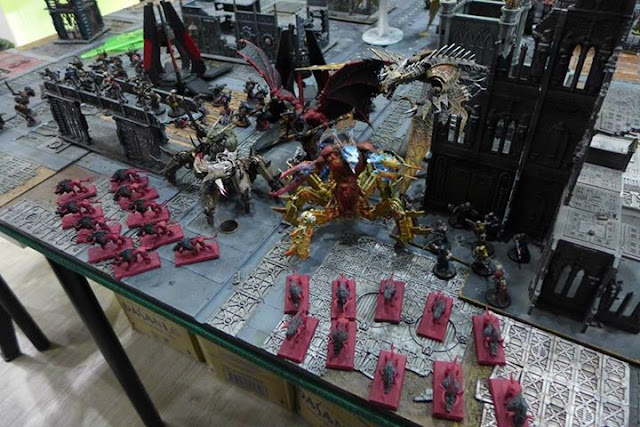 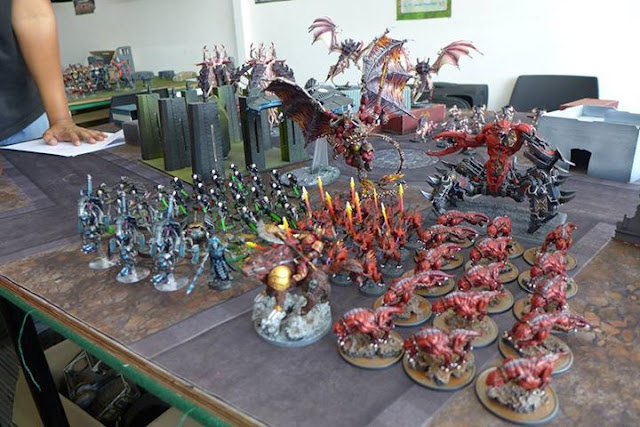 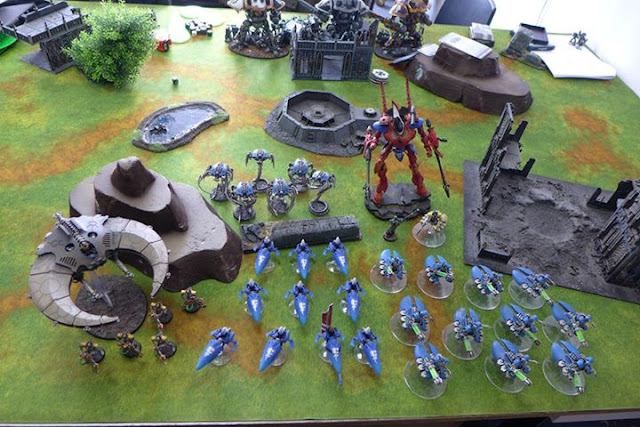 The obvious choice seem to jump out immediately. Imperial Knights were every where. So were Wraithknights. Jetbikes were also the choice of champions. After judging was complete, we were paired and randomly selected our tables. I stuck my hand into the box and drew the table. It was Table D, again. On the bright side it meant that I did not have to move 100+ models. Ah well, can't complain.

I was paired with Nick who brought 3 Imperial Knights, 1 Wraithknight and 3 units of Jetbikes with Farseer. Basically a very strong build. He won the rolloff to choose table sides and chose the side with more LOS block terrain. Since I had little to none on my side, I chose Night Fight and got it. I then deployed my stuff but chose to keep both my Flyrants off table and Nick also got the First Turn. 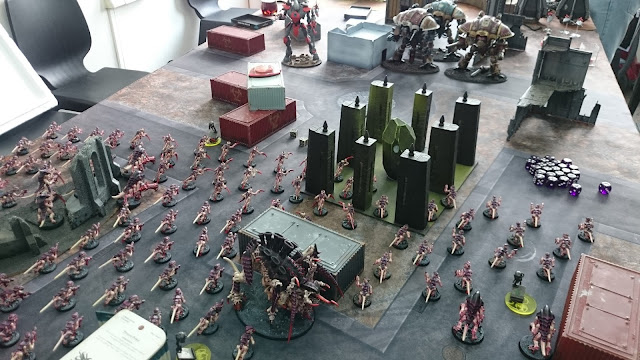 Now looking back at my deployment, I think it would have been better for me to put the Tervigon in the ruins on the left and swapped it for the Warriors. By doing that I not only get a better cover save (3+ Cover since it was Night Fight) and the Warriors would be out of LOS.

Nick was experienced in fighting the Nids. He took all guns and pointed them at the Tervigon, killing her in one turn which then prompted some popping of Gants. Thankfully they didn't lose too many of their numbers but having only 2 Synapse was bad. I started drifting my Warriors back to the centre where the Tervigon was to hold the line but it was the timely arrival of my Warlord that brought the army back together. I dropped both Carnifexi into his back line to kill off his Farseer (Warlord) and nullify 2 units of Jetbikes. I had to also keep my Flyrants in line with my Swarm and held back from pushing up field. At the same time this kept Nick's Jetbikes in check.

Few highlights from this game included 9 saves from a particular jetbiker that scored Nick an additional Maelstrom Point.

Over the course of the turns I had managed to whittle the Baron (lead Imperial Knight down to 2 Hull Points remaining). I was holding on to the card Big Game Hunter. The tally was now 11VP vs 10VP. I needed to kill the Baron to secure myself the win.

In the last turn, the my Warlord, the Shark proceeded to remove a Hull Point leaving his Baron on 1HP. The Butcher (Flyrant) then opened fire on the Baron, all 12 shots hitting.

I needed only 2 6's to appear. A very statistical possibility. The Baron would be able to save 1 of them since he was on a 4++ (Ion Shield). Confidently I rolled and was expecting to see those two 6's.

Not one appeared. DOH!

So now the Baron escapes, leaving me with a single point behind Nick for a Minor Loss! ARGH! Nick shook my hand like 3 times. LOL I hope I gave him a run for his money!

My final mission would be with Fauzi who is very familiar with the Tyranids as he plays them too. He brought 3 Imperial Knights, a Centurion unit with Grav Cannons, Librarian and some Scouts. Another 3 Imperial Knights. Becoming a theme here. 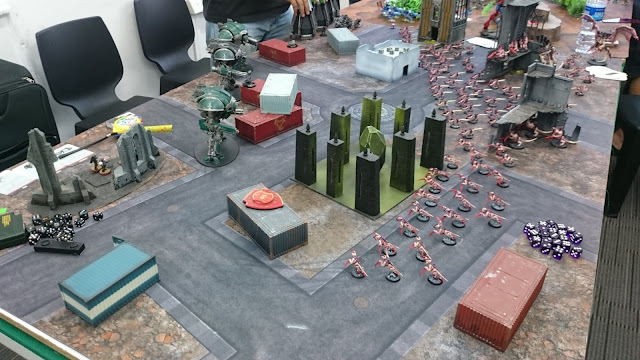 If you're wondering why the Hormagants are deployed deeper into opponent territory it is because I managed to roll 3 on the Strategic Warlord Trait, allowing me to Infiltrate up to 3 units and the Warlord of my choice. Fauzi had a unit of Scouts. I would not allow the same thing to happen from Pat's game during one of our practice sessions. By only choosing the Hormagants and the Flyrant, it gave me a little more control in the event I lost the roll to deploy Infiltrators first.

Highlights from the game include me destroying the Baron in Turn 2. The Librarian unfortunately must have been studying too hard because he was near to useless in combat. I lost my Tervigon early game but having learnt from Mission 2, I need to ensure that my Flyrants were on the table to prevent Synapse collapse early game. This time having won the roll-off for table side, I chose the side with the LOS blocking terrain.

Ah, you will also notice that I played on the same table AGAIN! LOL! 3 times I drew Table D! Triple D! I would have been happy with Double D's!

Then again, I had an amazing time with Fauzi. We both laughed a lot and from the onset, Fauzi sounded like the Green Goblin, cackling madly. Eventually I managed to make off with a Massive Victory.

Going second lost me the Tervigon early game but having the Flyrants on the table allowed me to keep my Synapse net up. But by going second on Crusade allowed me to take 5 objectives at the end of the game, allowing me to net 15 points on top of my other objectives. Wootsause!

So all those Gants I painted for spawning never saw the table! Nonetheless, the time spent on them came back.


Nick (whom I played against and loss by 1VP!) and Leonard came out as the top 2 players and they qualified for the invitationals. Dang. 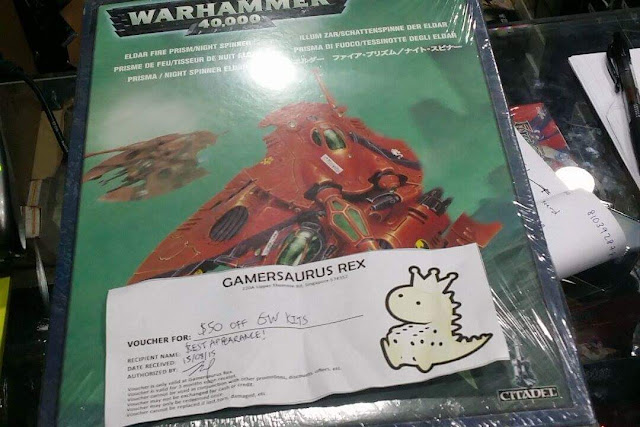 I would like to extend my appreciation to Gamersaurus Rex for organising a smooth tourney. Also, to the guys who sparred with me and prepared me for the actual day. They are in no particular order: Patrick, Marshall, Alan, Charles, Mark. Thanks also go out to Jason for throwing ideas back and forth within our group. And Rico for lending me his Venomthropes to paint up and prepare for the tourney (ironically not used as the list evolved).

It was an excellent day and although tired, I felt I now have the courage to deal with those Knights, both Imperial and Eldar variety. My biggest takeaway from this tourney: Expect to see Knights (both kinds) and expect to soak some major losses early game. Keep focussed on the objectives and kill off the mobile/softer parts of the Knight army (Jetbikes, Scouts, Drop Pods, Tactical Space Marines) which can capture objectives for them. Then focus fire to bring down the Warlord Knight if they bring the Baronial Court. Also, do make your Imperial Knight and Wraith Knight players DECLARE all targets prior to firing because being able to choose where to place the remaining shots AFTER they have executed the attack is tactically very powerful.

Another thing to note: most games only went to Turn 3 or 4. This was because we had only 3 hours. Even during practice matches it was the same, Turn 3 or 4 regardless of how fast I moved. Depending on the mission, going second can actually be game breaking as the time is called, or about to be called and you can make the decision to go for those objectives without any retaliation.

Finally, I wish there was more LOS blocking terrain. That would force more movement to find angles and make just more interesting games. Nonetheless, I am looking forward to the next event.

It's been a long report and I hope you have enjoyed it.

17th August 2015 Update: Just got the tabulated results and I actually am quite surprised at my position! Woot!