Introduction:
I bought my first Necron battleforce in Hong Kong at a shop called Fun Atelier. That was in December 2007. They've been sitting in the 'tomb' aka my shelf since then. I decided to paint them up and get them on the gaming board end of 2009.

The Necron race have always been a point of intrigue for me. I always wondered what happened to all the personalities, emotions and capabilities of independent thought the race possessed before they were turn into machines. And now that they are machines/ robots, do they still feel on the inside?

And have they come to regret the price of their immortality? (Seeing that their vengeance on the Old Ones have long since come to pass and grown cold) And do they have free choice in any way? And to also quote the title of a novel by the renowned author Philip K. Dick: "Do Robots Dream of Electric Sheep?" :) 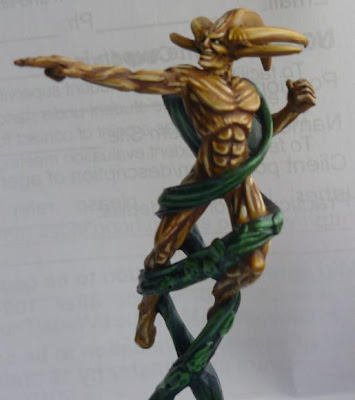 The being that made it all possible for the Necrontyr. This dude has alot of names. I do like his fluff. I have been using him in all my games thus far. He is a beast in close combat, and his ability to Deceive and Misdirect are as invaluable as they are entertaining in effect. 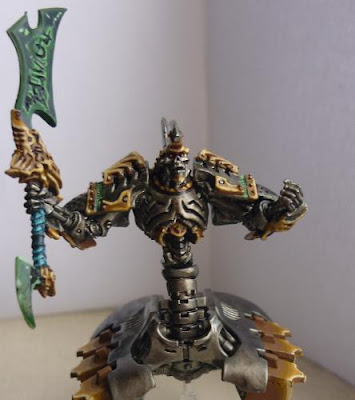 Basically a Necron Lord mounted on a Destroyer platform. This allows him to zip around the battlefield like a jetbike. I have not used him in battle before. I would still arm him with the Warscythe and probably a Phase Shifter for an invulnerable save. I'm still tempted to give him a unique name haha! 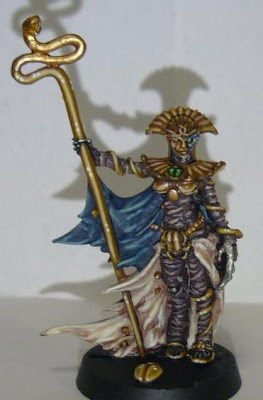 I finished painting up the Tomb Queen today (6th October 2010). A joy to paint as its such a beautiful model. She will be my Necron Lord on foot. She was a favored general of Mephet'ran the Deceiver in millenia past. Hailing from the Har'akir System of the desert world of Aegyptos, Tomb Queen Tahira awakens to bring the Young Races to heel.

The ONLY Troops choice in the Necron Codex. These were once citizens and soldiers of the Necrontyr, now just Arnie lookalikes. They are still great troops with good toughness and a decent armor save. I mostly use them to hold objectives. Pictured above are my 3 Troop choices, 30 Warriors in total.

The Destroyer cadre. I find them very effective in laying down a torrent of high strength suppressive fire at the enemy. I also find myself using them primarily to stun, shake or if lucky, immobilise vehicles. Pictured here are 10 Destroyers. 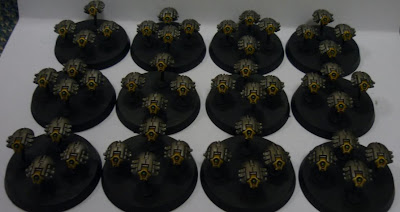 My Scarabs, all 12 bases of them. I find them really cute in a way. Uses are mainly to tie up the enemy in combat or speed bump. I have not tried hunting vehicles with the little beetles yet. They have good cover saves and number of attacks though.

Have not had an opportunity to use them as yet. I would want to include 1 or 2 in games above 1000 points. I speculate they would be useful for making We'll Be Back rolls and add a bit of punch to help out my Warriors if they do get charged. Plus they can also give birth to Scarabs :)

Thats my Necron army for now. I'm still considering getting a Monolith, if anything just for the model, which looks spectacular. I have no Elites choices at the moment. The Necron elite minis are all metal and appear to have wallet denting potential, so I'll keep a raincheck for those too haha!