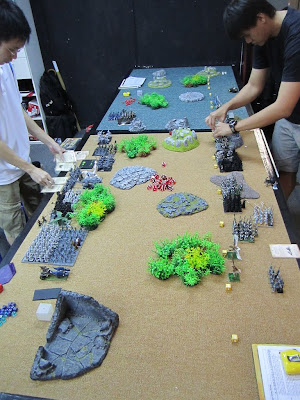 We had a mega Warhammer Fantasy battle yesterday at PI Mid Point. 2500 points aside with 2 players to each team. Defu and myself with High Elves while Defeng and You Cai worked with Dark Elves and Tomb Kings. While the game took a little longer than the usual games, we did finish it under 5 hours with deployment time and packing time built in.

There was no real preplanning, we just decided on 2v2 with 2500 points each player so there were no synergistic combinations on the table. Any that did arise were eventual.

As always, leave your comments and +1 if you're a Google Circle user!

Here are some items I would change for these sort of 2v2 games:

Also, in light of the "friendly" game style, anyone wanna adopt the ETC restrictions for our Fantasy games below?

Restrictions on the composition of the army

Army restriction
No army can be doubled, no SOC allowed.

- Rare choices may not be repeated, except for HE, where they can be repeated once for each choice.
- Max. 2 of the same Special choice.
- Max. 3 of the same Core choice, except ranked infantry without missile weapons and beast herds.
- Max. 3 units of chariots (incl. characters).
- Max. 9 PD/10DD in an army *
- Max. 3 units of flyers (incl. characters)
- Max. 45 models with missile weapons with a range of 20”+ (not incl. war machines, characters and chariots).
- Max. 5 warmachines.

*Magic description
You can use a maximum of 9 power dice in each magic phase. Each bound spell you use count as 1 power dice, all following bound spells used in the same turn counts as 2 power dice.

Every ability that grants the bearer complete knowledge of a single lore counts as one power dice in each magic phase.

All dice you would not normally generate, such as Focused Rumination Slann free dice, Skaven warpstones, night goblin mushrooms, power of darkness etc., also count in the total number of dice you can use in a magic phase.

Tomb Kings count each dice they use for a spell as 1 power dice and casket of souls counts as 2 dice total. They can not chose not to use all the dice when casting an incantation, for example a Liche Priest can’t choose only to use 1 dice on a spell. You can how ever choose not to cast a spell with a model. The 2 basic power dice all armies get only counts if they are used to dispel RIP spells with.

Dice removed by the Chaos Dwarf Chalice of Darkness count as dice used. You remove 3 power dice, you can use only 6 more in your magic phase.

Race specific:
DAEMONS OF CHAOS - Bloodthirster with Immortal Fury, Keeper of Secrets with Siren Song and Lord of Change with Will of Tzeentch count as an additional hero choice; Herald BSB may take either daemonic gifts or a daemonic icon, not both; Daemonic Gifts may not be duplicated (except for Spellbreakers); Horrors are limited to 0-2.
DARK ELVES - Ring of Hotek counts as 3 dispel dice each phase; every assassin after the first counts as a hero choice; Shades limited in unit size to max.10; Pendant of Khaleth counts as a hero choice.
EMPIRE - Steam Tank counts as two Rare choices
LIZARDMEN - Characters mounted on Stegadons also use the relevant special or rare slot; Max of 6 Terradons in army; discipline Becalming Cogitation count as 2 dispel dice. Max. 2 Stegadons of any type
ORCS &amp; GOBLINS - Max 6 goblin fanatics.
VAMPIRE COUNTS - The Drakenhoff banner counts as an additional hero choice; Every +1 to cast in the army counts as 1 powerdice in each phase.
WOOD ELVES - Treeman Ancient counts as Treeman.

When calculating victory points at the end of the game, once you have the result, then add 10% to any category A army's losses rounding off as normal. Any category D army would conversely have its losses reduced by 20%