After 6 weeks of campaigning, each faction scored bonuses for the final game which took place yesterday at Titan Games. Props to them for supporting this campaign, providing us not only a dedicated place to play but supplying us with food and even sponsoring the prizes at the end!

As for the players, each player contributed to the greater fight by taking on opponents on the opposing faction and scoring bonuses which helped in the Apocalypse.
Each player was given 2500 points to work with. The Tyranid players really put their minds together to come up with a synergistic list. We had a tanking component (played by me), a Deep Strike component (by Rico) and a mobile force (by Marshall).

I have not included lists here but most of the units are WYSIWYG so it shouldn't be a problem. Enjoy the batrep guys!

We bid for time and the Imperials bid 5 minute. The Tyranids? 99 minutes! LOL we wanted to go 2nd so that we can steal the objectives from the Imperials at the end of each turn.


Imperials took the first turn but the Tyranids played the Spore Chimneys. In hindsight, we should have also played the Blind Barrage to prevent me from taking that many hits so early on. 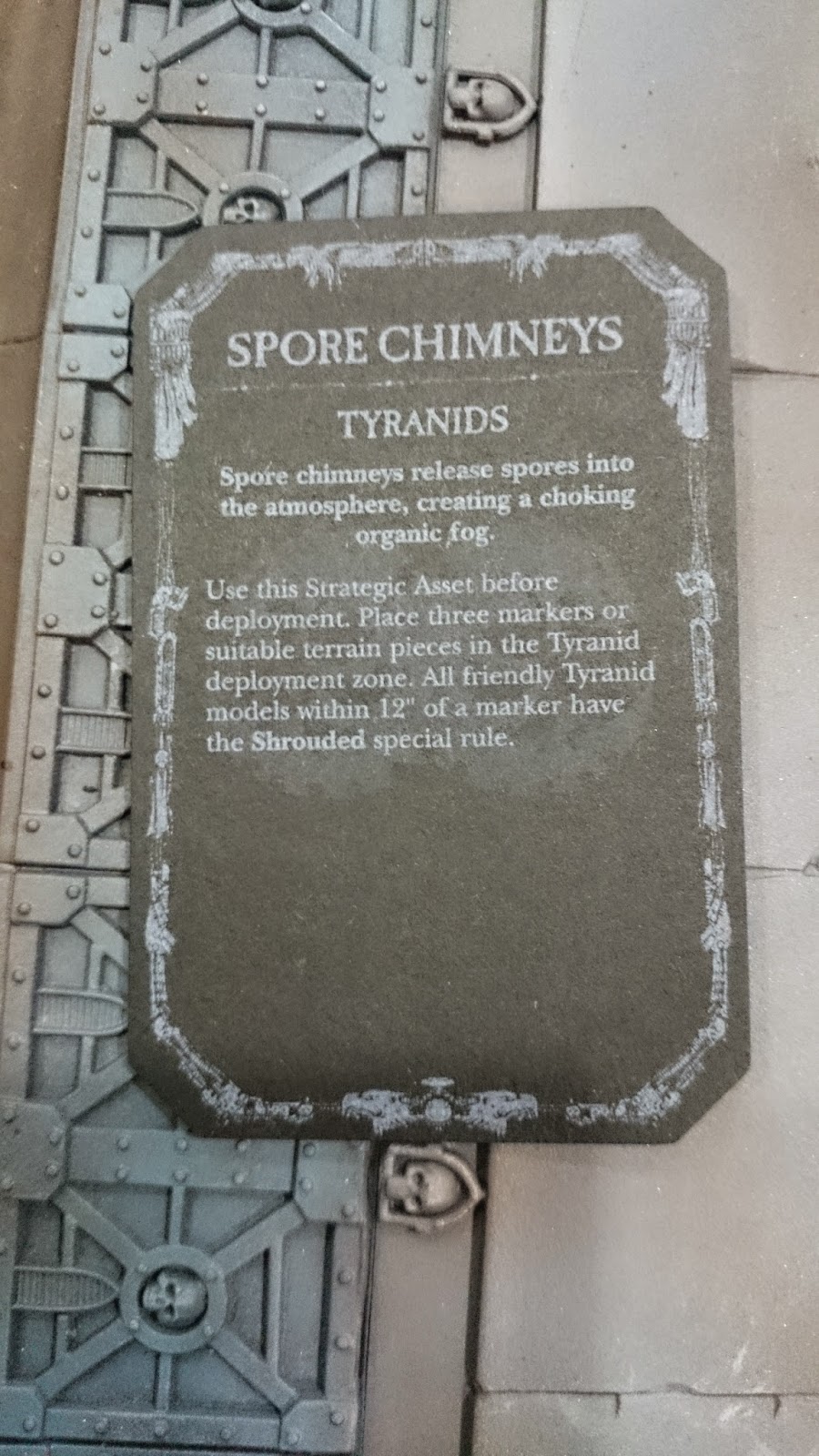 The Imperials used their Precise Coordinates to allow them to Deep Strike with unnerving accuracy.
The Imperials managed to kill off our Supreme Warlord, the Brood Queen which sat at the corner of our table. A lucky D Cannon shot loped all wounds off the 6 wound Toughness 6 MC. Ouch.

While the Imperials were busy killing, the Tyranids was busy capping objectives. Would this strategy continue working?


Turn 3
Imperials burnt a point to bring their Shadow Sword back but on my side of the table where an objective sat.

Unfortunately though his To Wound rolls were not that impressive! I saved all the wounds and my Flyrant walks away unscathed

Turn 4
The game was still in the balance, the difference only being 6 VPs.

In the Tyranids Turn 4, we called our Finest Hour for Rico and Marshall's Warlords allowing them to move 72" each (3 x movement of 24"). Since my Tyrannocyte earlier prevented the Shadow Sword from sitting on the objective, it allowed Marshall's Tyrant to land on it and be the closest model to the objective. Team work right there!


This was the turning point for the game. Tyranids had secured most of the objectives widening the gap for the two factions.

At this point the Imperial players were 21 VPs behind. The only way they could win was to take 5 points in turn 5 and sit on it for the game (worth 25VPs). With that focus in mind, they went about to try to accomplish it, knowing that this will most likely be the final turn.

Tyranid victory. The Shield of Cryptus has fallen!

As a prize, Titan Games has given each player $20 worth of store credit for playing! Enjoy your wins guys and see you all on the field really soon for Season 2 of the Shield of Baal.