Got back into a gaming mood after a long dry season which always happens towards the year end holidays!

Last weekend Tim Miller came over to my place for a game of FOW. I was still tweaking my Forward detachment list as the Soviets have been seriously hit by lots of special rules and the such in Version 3.

Tim on the other hand brought along the latest Volksgrenadier list from the latest released Nuts: Bastogne book. And is looking set to spam cheap "reluctant trained" germans with their panzerschreck & panzerfausts! Not very good for my Tank heavy list..... 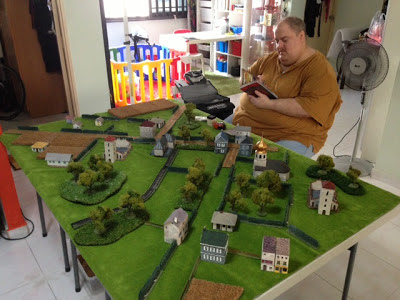 Here we see the big man looking up on our mission. We rolled the random mission generator and came up with "Hold the Line" which was played along the long table edge. Being a Mech company I am always the attacker so I had to wait while the Germans chose the table edge to defend and deploy. It's a long way to the end of the table for the objectives and the Germans are all nicely dug in. It was gonna be hard to root them out and get the objectives.

I had to get any objective before turn 6 to win the game. The Germans had to hold or contest to bag it.

Naturally the Germans capitalized on this and chose the end with the dense town. Lots of buildings for concealment and ambush. Lots of hedges and obstacles to hinder my movement. 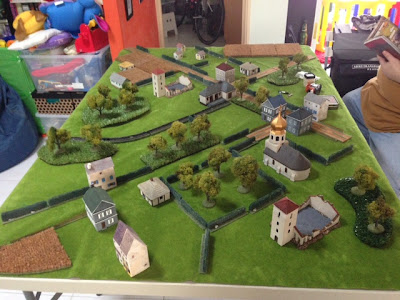 Our terrain setup for the battle. A really tightly packed table. The germans deployed on the bottom half of the table. 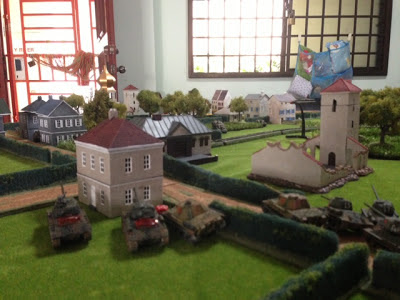 Despite pulling up a large platoon of T-34s with my decoy Panthers unit. I was unable to get any shots due to the Germans being comfortably dug in and gone to ground.

I moved up along the road but was quickly halted by the Anti-Tank Guns. One lucky turn saw all four of my Heavy IS-2 tanks go down in flames......

This led to a large platoon of German infantry being stuck in the houses with very little targets for the rest of the game. But I guess they already served their role well in taking down my heavy tanks.

With the company HQ and almost 15 stands of infantry holding the objective. I was not going to be able to root them out. And once the Germans dig in and hold the objective it's gonna take a lot to clear them out.

I had to rely on my T-34s to rush down the relatively unprotected right flank and try to get the objective quick to seal the game. 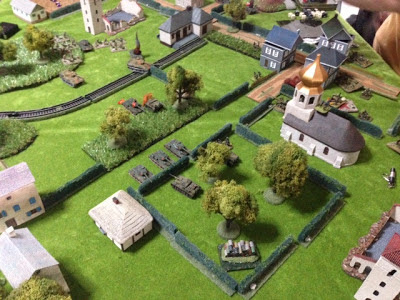 Tim was really unlucky that upon reserve roll none of his units arrived to lend the much needed reinforcements as my T-34s looked poised to steamroll their way towards the objective.

However Tim was lucky enough that my T-34s failed to destroy his small Stug unit tasked to defend that objective. Once again Tim failed his desperately needed reserve roll the second time on turn 5!!! 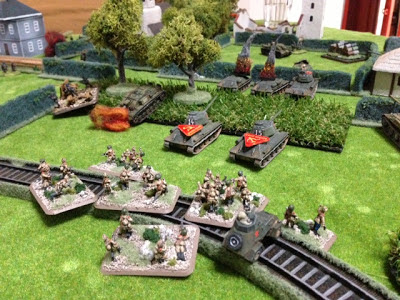 I was almost certain of victory as no reserves meant that his 2 remaining Stugs could not have withstood the advance of my T-34s. But alas my tanks all bogged down during that vital assault toward the objective, which meant that Tim would definitely get his reserve reinforcements on turn 6.

My infantry were too far behind to do anything. And with reinforcement arriving along the German edge would mean fresh German units contesting the only objective I could possibly take. We ended the game as it was a certain German victory as they held firmly onto both objectives.

I was so close! Darn those tank mechanics, if only they had done their job better!

Email ThisBlogThis!Share to TwitterShare to FacebookShare to Pinterest
Labels: Batrep, Flames Of War