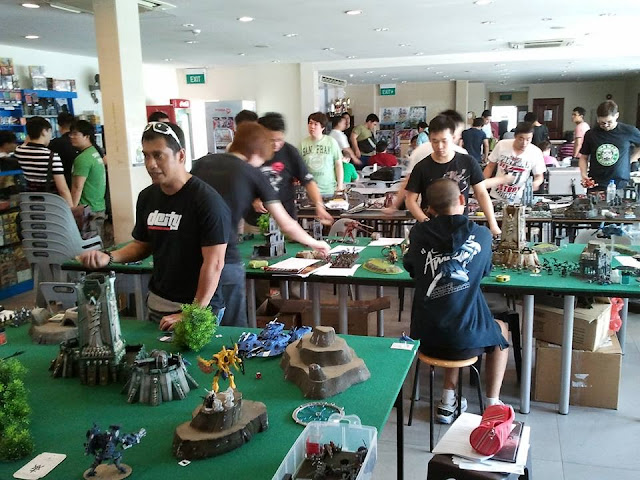 Just recently there was a tournament held at Gamersaurus Rex, a gaming store that has a strong 40k following. The guys here have been doing pretty well to keep the community going and this is another example of their commitment.

As I was not able to participate due to personal commitments elsewhere, I managed to find a very good write-up by one of the participants, Jensen Goh. The following is his account of how the tournament went.

It was a day of stories and tales to be told, a day of reckoning for some and for others a test of faith. Dice was rolled, objectives captured, and a relic mission was played. In the end there was one, Nicholas Leong, playing Dark Eldar/Eldar, clinched victory in perhaps one of the most intriguing finishes toa WH40k tournament to date yet.
An immovable object

This tournament saw the return of Patrick Poh to the tournament scene, missing out on the previous tournaments due to various commitments; he had been otherwise a consistent finisher within the higher echelons of tournament results. Being known for solid play and intelligent meta-gaming, he brought quite an unconventional list, featuring multiple psykers wanting to roll on the telepathy table to bog his opponent’s down with Hallucination and Puppet master. The strategy proved to be effective, allowing him to sweep through three games before running into…
An unstoppable force

Gavin Tng has been on a tear in recent tournaments, finishing first across multiple occasions in multiple formats with his worst showing being a 3rd place finish in the GR 2v2 format. His lists, simple and efficient; His execution, relentless and brutal. Game after game he has swept through his opponents featuring efficient and well-built lists. Defeating Keith in the first round and picking up two games in sweeps subsequently, he looked well poised to add another tournament title and affirm himself as the best player in Singapore.

However, after a long an intense battle, Patrick exploited Gavin’s tendency to skimp on troops and forced a draw on 1 point each. This meant that no one would go on to have the tournament winning 4 wins, and allowed…

With direction, and magnitude!

Nicholas Leong has been in the shadows of the more prolific players such as Patrick and Gavin for a long time. Often posting consistent results across tournaments, he had yet to score a big win. This proved to be his lucky break. Playing a Dark Eldar/Eldar list, his execution and use of uncanny tactics allowed him to steal the title when neither Gavin nor Patrick could finish the job. Dropping a game in the second round by a rather large margin, it looked all but over for Nicholas Leong, who answered in a resounding manner to sweep his next two games to bring his total score up to 28.

Featuring the regular host of the Dark elder flying circus, 3 raiders 3 ravagers and 3 venoms, he complimented the combination with a beastmaster pack led by Baron Sathonyx and accompanied by a farseer. The combination of effective shooting and close combat support overwhelmed many an opponent, punishing careless deployment and leaning in on any edge his opponent gave him. 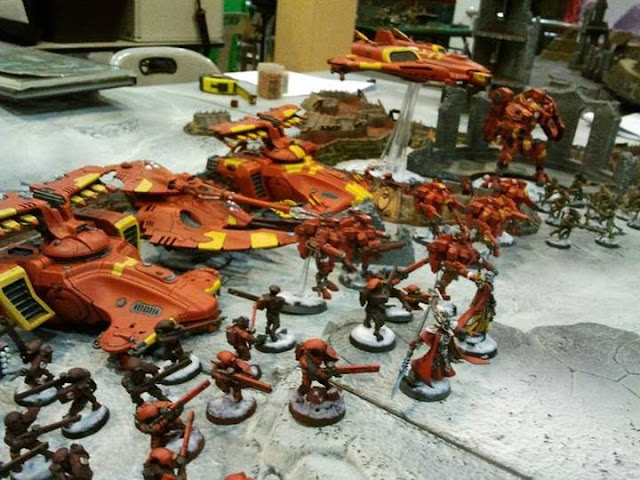 For all the hype the wave serpent had been getting since the eldar codex release, the results were rather disappointing, with none being part of the lists that garnered 3 wins on the day itself. The big wave people had predicted it to have on the metagame turned out to be more of a splash. Representation by the eldar mech menace was rather strong as well, with almost 25% of the field going for such an option.

Nonetheless, people came prepared to deal with the serpent threat, some opting to work in some answers in the form of skyrays (Myself, Steve K), or taking up a missileside team (Nic Chan) in the Tau option categories. Others opted to go for more indirect approaches, running equally resilient armies such as Azrael guardsmen with power field generator’d landraiders in heavy (Gabriel) or flying monstrous creatures (Patrick).

The best answer had to go to Gavin Tng, seeking to stifle the mobility of the Eldar through Wraiths and taking space wolves as desperate allies for rune priests and fenrisian wolves to keep up the pressure. The psychic disruption provided by the rune priests and the close combat oriented army would seem to be quite a solid solution to Wave serpent/Seer council lists.

For the greater good

Tau showed the best wins per player ratio this tournament, with all 3 players featuring tau as their main detachment finishing within the top 6. The lists however were vastly different in execution, with the allied detachment dictating the way it played. Nic Chan brought along a very strong gunline composition, featuring a farseer from Eldar to increase the efficiency of his shooting and reduce reliance on Markerlights. Steve K purchased utility from the Eldar codex (props on winning best painted), while I brought a close combat element in the form of Nob Bikers.
Feature game

As much as I would like to have done Gavin vs Patrick in round 4, my participation meant that I would only be able to do justice the games I played in this report.

Round 3 Gavin vs Jensen

Gavin won the initial roll off and made me go first, forcing me to waste a turn maintaining my position to brace for his drop pod and allowing the value of his night scythe to go up. Although I flipped a higher point total on my side of the board, the nature of his list made that advantage I had irrelevant very quickly. His plan was simple, shove, and this game would be a battle of sword and shield, his offense against my defense.

Turn one for me was spent shooting at the fenrisian wolves, as I did not want to break position to minimize damage from the rune priest in the drop pod. The wolves were killed down to the 2 out of LoS and I passed the turn back to him.
The drop pod came in and landed right next to my riptide, allowing the interceptor fusion to steal first blood for me. His 2nd rune priest jumped forward and proceeded to snipe off my ethereal using JoWW, giving him slay the warlord. This was clearly a misplay on my part as I should have been more careful in measuring the threat range of the 2nd rune priest. However, luck was with me as the drop podded rune priest completely whiffed on his Jaws, as I passed the initiative test on the Nob Bikers he targeted.

The 2nd turn provided me the chance to capitalize on the earlier whiffed jaws. I positioned my Nob Bikers to encircle the Rune priest and his unit while I finished off the 2nd rune priest and the rest of the fenrisian wolves. Seeing the wraith squad close in on one of my sky rays, I fired all its missiles, killing two wraiths. However, I failed to declare the boundary of an impassable terrain and allowed his rune priest to sneak round and create a 3” charge distance when he failed his leadership roll. A double 1 for charge occurred and suddenly I was suspect to another round of JoWW.

Gavin took his turn to punish some of my positional mistakes such as my deffkopta’s position from reserves and brought the wraiths in on the gunline. However, the empty sky ray served as quite a good screen, meaning that he would have to spend another turn before contacting the squishy fire warriors. I lucked out and passed all the JoWW tests once again, but I knew that the missed charge was going to cost me, as with the Wraiths knocking on my door, I had to decide if I wanted to spend the Nob Bikers dealing with the Rune Priest or getting the charge in on the wraith squad.

Coming round to my turn, I thought it through and accepted that I’ll have to take the JoWW for the rest of the game. Letting the Wraiths charge me on their terms was definitely not a good idea. The Nob Bikers crashed into the large wraith squad and carved the squad down to a destroyer lord with one wound and a wraith.

The decision to let the rune priest live another turn bit me hard, he cast that devastating spell through the combat, targeting the unengaged riptide and took out a warboss and Nob Biker along with it as my luck ran out on those I tests. That suddenly tipped the game in his favour as the rest of the Nob Bikers failed to take out the Wraith squad and were swept in combat.

At this point, I was out of options and had no choice but to give him the game.
Posted by Anything But Ones at 11:38:00 AM