After signing up for the 2v2 and 3v3 tournaments a couple of months back with the guys from this blog, I knew I had to work on the army to get it ready. Blood Angels would work best with a strong close combat element due to their Chapter Tactics of +1 to Wound on the turn they charge, get charge or make Heroic Intervention.

With this in mind, I started of by creating a list with a ton of Death Company.

Unfortunately I was not aware that Bolters were actuallybetter than Bolt Pistols in this edition, at least for the Death Company so I went and glued on their arms! I usually magnetize their melee arm and never once thought that the Pistols would be less useful. Hindsight....

I then realised that my list could not make the cut. It was a paper thin army getting shot to bits was way too easy. I had to trim down the Death Company to make room for some guns. After watching how Marshall expertly used his Hellblasters, I ordered a box of them. It was also at this time that Jason suggested that I do the Slamguinus build and I was desperate to make this list work. 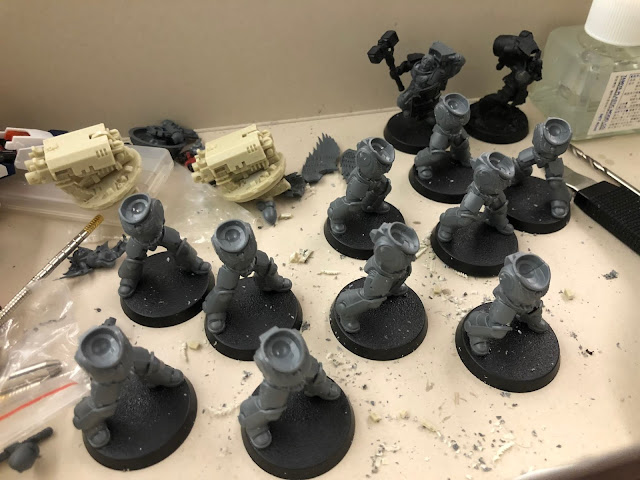 I went on to play a few more games and as the time trickled away, I decided to bite the bullet and power ahead with my list.

This then forced me to break out the airbrush and work quickly to complete the models.

The fun of building a competitive list is that it encourages you to find optimal builds. While doing that, I still have my limits, such as I can't see my BA ever ganging up with Dark Eldar for example.


The 2018 FAQ then hit! My list was no longer viable! I could no longer hide the bulk of my army in the skies waiting to drop as the Power Levels cannot exceed those on the ground.

This led to me shrinking the Death Co, adding more tanks in the form of Razorbacks and creating a sold anchor. It also altered my playstyle forcing me to consider using more ground based tactics instead of depending on just Deep Strike. Oddly, this meant I was improving as a player.

This is the army I took to both the 2v2 and 3v3 events - oddly enough with very different results! Same army, quite a large pool of players but wow, the results stumped me. Feel free to go compare and give me your thoughts on why I won or lost.
Posted by Anything But Ones at 8:25:00 AM