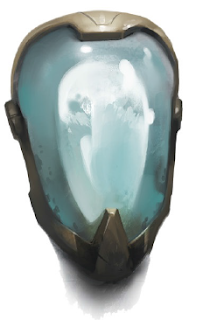 Welcome, my friend. Sit yourself down,
And meet the best Shadowseer in town.
Seldom will you see,
a tale that's spun by me;
A story of such glory,
in which you'd want to be.....

Took part in a 1000pt Open organised by Grex over the weekend, 16 players, 3 rounds, and only one Lord of War allowed. I brought a list of Harlequins to compete, with the sole aim of putting up a good fight, given how competitive lists are generally dominated by the big 4 of Tau, CW Eldar, Necrons, and Space Marines.

I brought a Masque Detachment list which had 3 Troupes, each carrying one of three signature Harlie weapons, the Kiss, the Caress, and the Embrace, along with leadership shenanigans with the Mask of Secrets, and a Solitaire.


I ended up facing Space Marines in all 3 games, though their takes on the armies were all vastly different.

The Masque of The Third Act waited motionless in the ruins, observing the lumbering amethyst armoured humans trudge through the knee high snow. From this distance and in this light, the mon-keigh looked like dried blood drops on white silk to the Troupe Master. Thin wisps of steam escaped from the mouth of his grinning mask as he exhaled, and with a small sideways glance at his Troupe, he leapt into action....

The first game was against Val's purple Ultramarines, in a CAD with loads of tacticals and a Devastator squad. Basically mass Objective Secured units to take and hold objectives.

First turn saw me pull off some Harlie shenanigans (and this is debatable but the TO and I couldn't find any RAW preventing it), scouting a transport with the Solitaire forward 12", moving and disembarking for a first turn charge! Do chime in and let me know if you find something in the rules that states this can't be done.

In payment for the above cheese, the mighty Solitaire proceeded to whiff all his attacks and get locked in combat, killing only two bolter marines. As the pics show, my army steadily got shot away, but I managed to get my licks in. Harlies are one of the most mobile foot armies, but they lack Objective Secured, and that hurt me in this game against the ObSec marines.

An interesting point I noticed here was how badly the Veil of Tears test can actually throw off an opponent's shooting, with troupes becoming unkillable beyond 24", the range at which most heavy weaponry operates.

The rest of the game consisted of me trying to pop open the Rhinos and kill units to get them off objectives, and I sadly failed to do much damage. My army list does lack anti-armour weaponry, and I'll need to look into resolving that if I'm to continue building on this list.


When time was called, the final score was 12-11 to the Astartes, and Defeat for the Third Act! I made a mistake those Devastators and their lascannons, but it was tempting to try for First Blood, given that they were so close to the table edge.  Lesson learnt, don't be greedy! The Solitaire saw all his attacks bounce off the Devastators' power armour, and because of my high initative, we remained constantly locked in combat instead of them fleeing off the table.

The Third Act had been bloodied in their attempts to secure the Webway portal from the mon-keigh invaders, but at the very least they had accomplished most of what they had set out to do. While yet another priceless webway portal was lost, they had managed to set charges to deny its use to any of the hulking invaders. Stepping out from another shimimering Webway portal on a desolate planet, the black-and-white clad Harlequins looked up at the skies, as they began to rain fire and steel...


The second game was against my old frenemy Tang Liang, who brought a massive 9 drop pods, and an Inquisitor with servo-skulls, psycannon, and Terminator armour. This was actually a poor match up for the Harlequins, because drop pods nullified the protection afforded by Veil of Tears. His null deployment made my first turn useless, though Harlie first turns are generally nothing more than getting buffs and the right positioning set up. His pods all came in, and I found myself having to play for objectives as they had the numerical advantage and psychic immunity. Luckily for me, the majority of my objectives were for killing units or the like, and less for securing numbered objectives.

Here's a tourney noob's tip for facing mass pods: Take advantage of their immobility and spread out objective placement while clustering some units. Your opponent will have to prioritise killing you or scoring objectives.


This mission had us drawing objectives based on the number of objectives we held at the start of our turn, which could doubly hurt me if I wasn't quick in clearing opposing forces off the objectives. I had some luck in this regard, as my opponent's objectives were those that required him to kill my units. As such, he was forced to bring his pods in close to my forces.

Getting close to Harlies is NEVER a good idea, unless you're a Wraithknight or a Tau'nar. I got one multi-charge off on his pod and marines, while the Caress Troupe charged a character-heavy unit and wipe them out with some assistance from the Solitaire. The next photo will show where his Warlord's pod dropped in the first turn (Pod #4), and in hindsight I'd have tried to bring the Warlord's pod in centrally so that he could threaten more units with his mindbullets and shooting.


More pods kept coming in, but I was barely managing to hold my own in killing what came out of them. Tang Liang had an advantage of drawing more objectives, but I was having greater luck in actually scoring the objectives, given my drawing of the "kill something" type cards.


The game ended 7-6 to the Harlequins, and narrow victory for The Masque of the Third Act! This was my second time facing Tang Liang, and it was a blast yet again. When all his drop pods came in I was worried that my Harlies would be toast, but good cover saves and veil of tears saved my bacon yet again. In retrospect, I probably should have spread out my forces more so that the drop pods couldn't all cluster around me and shoot me to pieces, but the silver lining was that they were all within easy multicharge range.

The Troupe Master allowed himself a grin beneath his mask. After yet another bloody skirmish, the Third Act had managed to secure the webway portal intact, and this would prove useful for Craftworld and Exodite forces in the future. He himself had slain the enemy's most powerful psyker, reaching through his armour with his Harlequin's Caress to pluck out the still-beating heart. As he set the rest of his Masque to clearing the remaining detritus of Mankind's finest, a Shadowseer sent him a mental alert. More interlopers...

The final game was against yet another Space Marine army, and this one was a White Scar army with a bunch of grav bikers, a Land Speeder, and 3 Ironclad dreadnoughts with Heavy Flamers and/or Melta in drop pods. Uh-oh. The lack of anti-armour is thrown into stark relief yet again, particularly when only one squad and the Solitaire can do anything to AV13.


Lacking units to bubble wrap my important stuff, I again spread out to try and minimise the space he could safely deep strike in. Again, this saved my bacon as one pod mishapped on the first turn. The other Ironclad promptly scored him First Blood by blowing up my Voidweaver.


The rest of his forces advanced up the board, but I had utilised the redeployment to put myself in a good position to charge him in Turn 2. Over several rounds of combat, and with some bad luck with Hit & Run for both my opponent and I, the bike unit was whittled down and eventually wiped out. That still left all the AV13 problems for me on the field, though they would not be able to do much damage to me either.


Unfortunately, I drew objectives such as Domination and the like, which meant that I had to eventually take some of the drop pods and Dreadnoughts off the objectives.

Playing to the objectives definitely helped me, but despite my best efforts, a combination of poor rolling and one major tactical mistake meant that I ended up drawing 9-9. The mistake happened in the last turn of the game, where I blitzed my Solitaire to get his base attacks up to 10, and then charged an Ironclad. I should have gone for the drop pod sitting in my backfield, as both Wee Kiang and I had Linebreaker. With 11 attacks and the Harlequin's Kiss, I should have been able to kill off the drop pod with a bit of luck, taking away his Linebreaker and getting the win. Ah well.

The Troupe Master shrugged off the healing attentions of a bonesinger, as his burns began to rapidly knit and heal. Many had fallen that day in battle against the humans, including the Solitaire that had accompanied the Masque. The frozen planet had put an end to their battle, as night fell and the weather became too harsh even for the Eldar and transhuman warriors. Both sides had retreated to rest and recover, and let others take over the fight.

A tight grin formed on the Troupe Master's face as he shared the news with his fellows, their endeavour had not been in vain. Intercepted messages from a nearby Craftworld indicated that they stood victorious in battle over the xenos known as Tau, thanks to the strange lack of interference from human forces that were otherwise occupied...

Overall, the tournament was great fun, and I managed to finish in 6th place out of 16 players! Not too shabby considering my army was one of the most squishy. Again, our very own Rico Chia took best painted, while the eventual tournament winner was an Eldar list with 33(!!!!) scatter laser bikes. Took out a Stormsurge in one round of shooting, those did.

Many thanks to Grex for organising the tournament. Next up, the 1850 tournament in February, which is allowing Forgeworld units! Veil of Tears, save me from the Tau'nar!