Shield of Baal: Exterminatus Week 1 concluded on Sunday. Here are the highlights for the week. 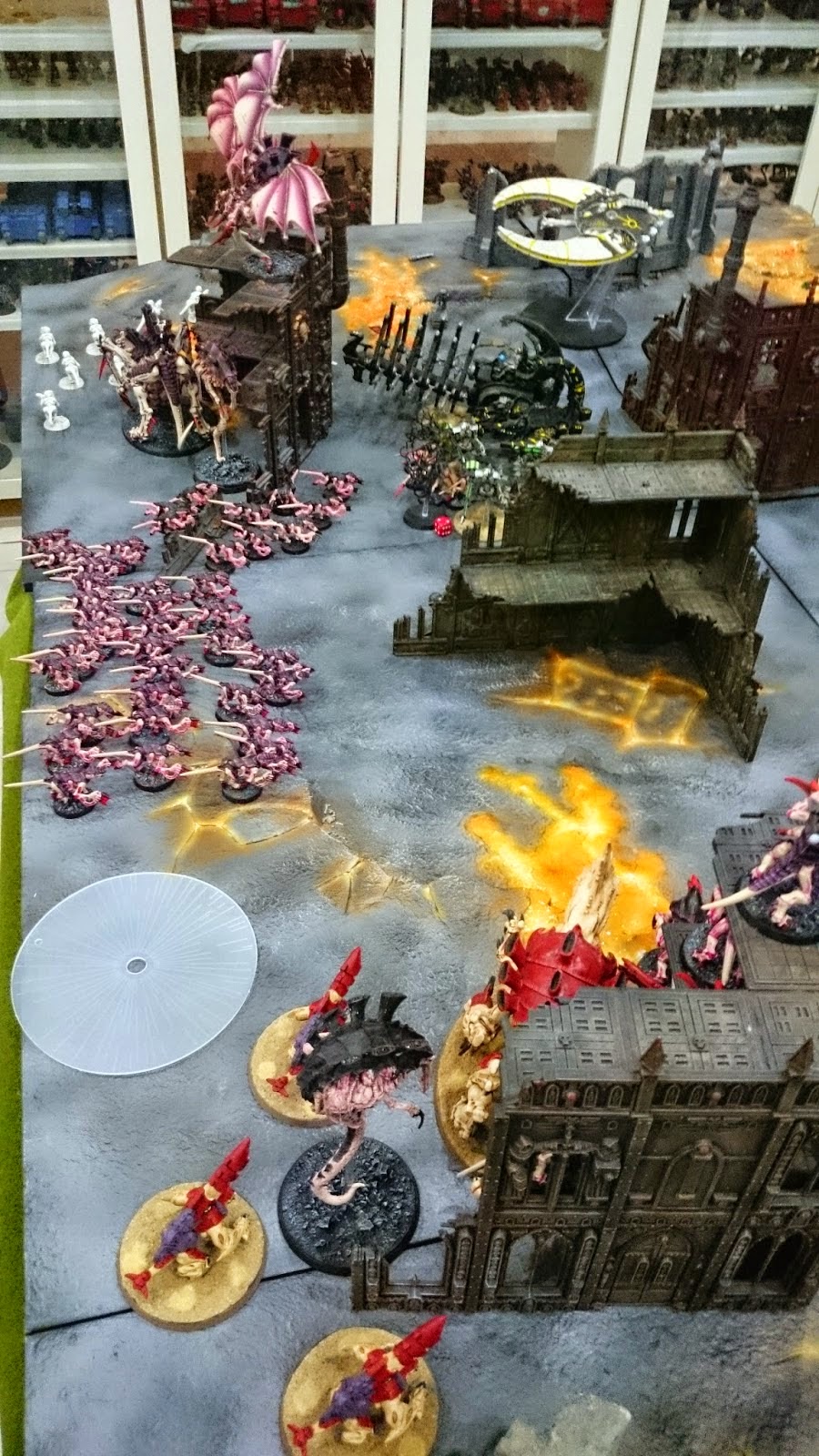 Mephrit Lord Jason sent in his C'Tan shard in while riding his Barge. Supporting the Star God, this Deathstar unfortunately got bogged down by Gant after Gant after Gant. 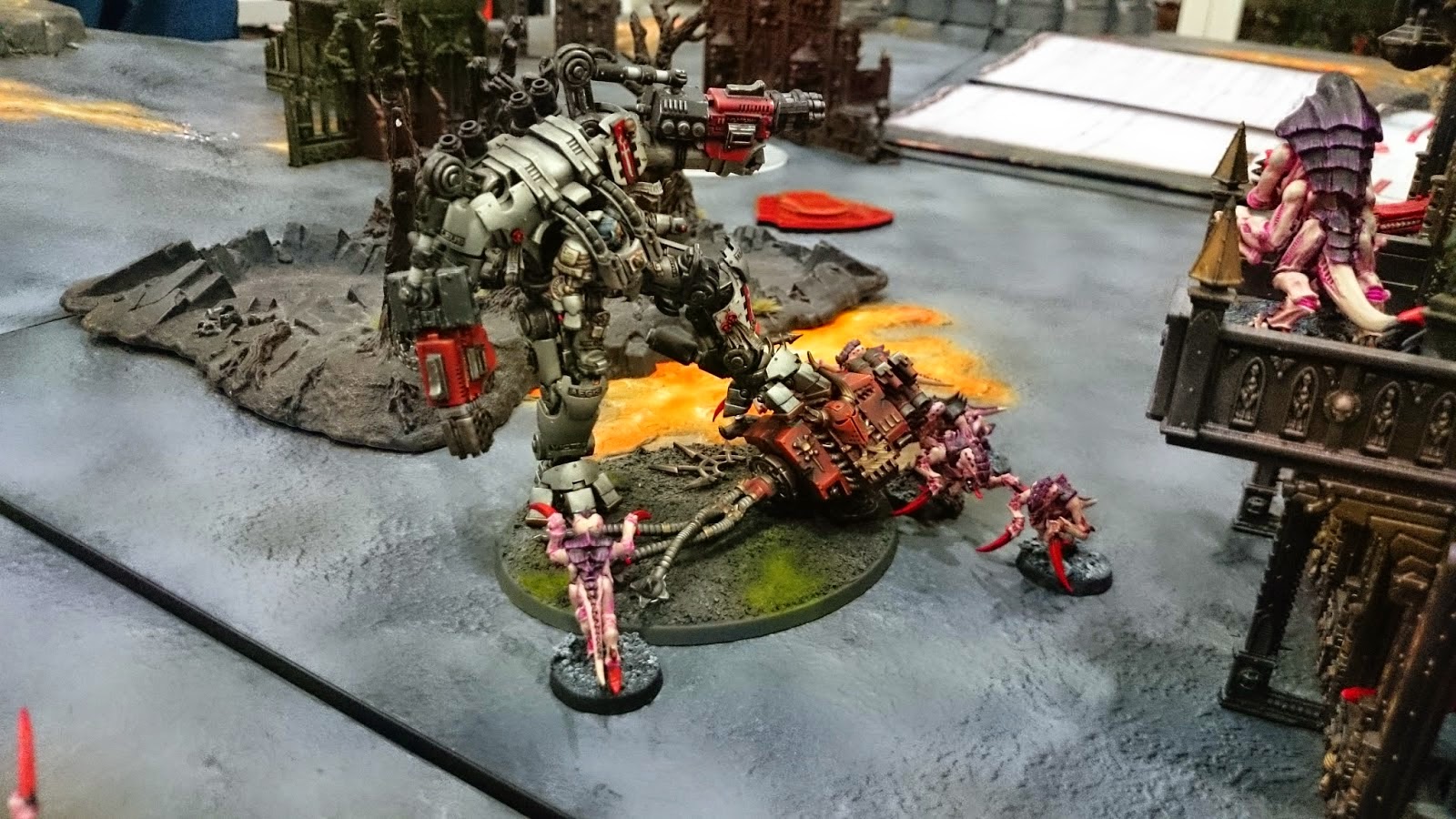 Brother Captain YC sent in a strikeforce to attempt to free the city of Asphodex. Preferring close combat to stave away the Hivefleet's bioweapons, the Hivemind focussed on their most powerful heroes while drowning the Dreadknight in Gant after Gant after Gant. 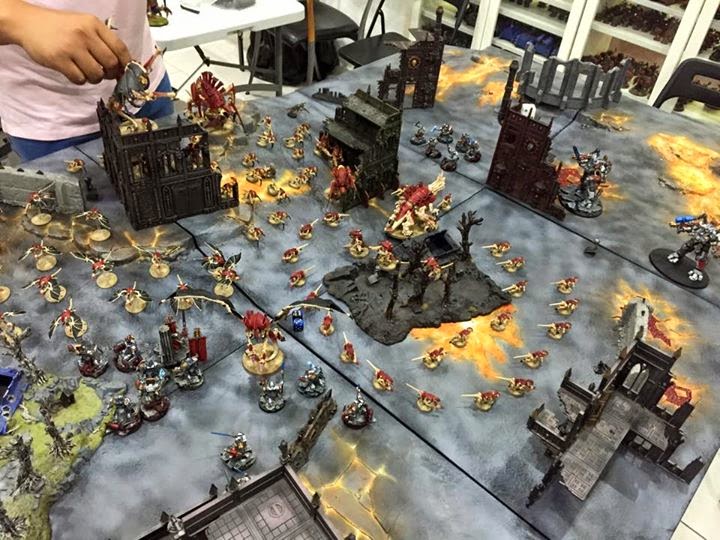 The Beast of Lysios commanded this force of monsters. He managed to squeeze in quite a lot of games this week but only managed to complete the After Action Report for 2 of his games. These are his comments.

With the 2 dreadknights got tarpit by 30 gants unit, 2 terminators units reduced to 1 man each and were in combat with hormagants and gargoyles. I think I'm in good shape, but the moment I think I sealed the game is when the moment stephen got greedy and decide to detach draigo from his paladins unit. By doing so, the paladin unit loses the fearless rule. With all the pinning weaponary unleashed upon the paladin unit, I managed to pin the close to 1000 pts unit down. Shadow of the Warp for the win.

Best unit
It's hard to choose the best tyranid unit for my army, because every units did their job almost perfectly. If I really have to choose one particular unit, it will have to be the malanthropes. It gave shourded special rule to my whole army and allow me to withstand the G.K alpha strike. I lost 6 gants from the initial G.K attack.

Worst unit
Surprisingly, the worst units of the game are the dual Flyrants. Consider the fact that their point cost and had been on the table from turn 1. They killed 4 terminators and cause a wound to the dread knight thoughout the game. The ridiculous psychic dices that G.K had doesn't do those tyrants any favours as well. 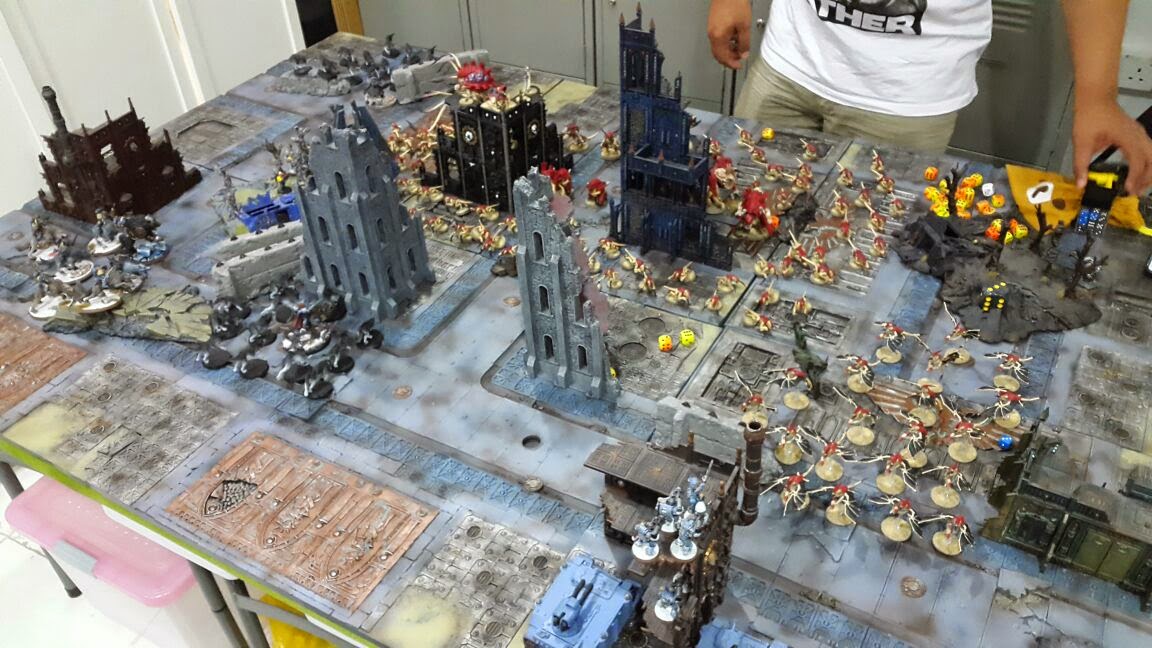 Another AAR against space wolves, this time I'm playing against Weijia. 2000 pts

Weijia is not my regular opponent, but I did played against him once or twice before. I know he like his thunder wolves cavalry deathstorm and his mounted lord. I changed my list for abit, dropped the tyrannocyte and tervigon.. bought 2 dakkafexes instead.


Deployment
Seeing weijia list, I know it's a very aggressive playstyle. I deploy 3 layer of tyranids line. my front line troops deployed all the way till middle and create a massive footprint. Midfield are my support and counter assualt element, the dakkafexs, hive guards, toxicrene, malanthropes. The third layer are my living artillery and swarmlord.The idea is to protect the swarmlord and living artillery who are the most important elements in my army.

Changing point of the game

As expected, the twc deathstar had smashed and punch through my front lines. I send the single dakkafex and toxicrene to intercept the threat. After all the supporting fire, both of the monstrous creatures charge in. The toxicrene strike at i6 with tons of attacks. With preferred enemy given by the swarmie, the toxic manage to dealt 6 wounds. Weijia decide to use his mounted lord to tank the wounds, and fail 4 saves and die. As a result, the twc broke and flee back. This give me breathing space to deal with other threats.

Best unit
There are several unit deserve to be the best unit. Toxicrene which stopped the charging twc and exocrine who unleashing punishing plasma volleys. IMO, The swarmlord still are the best unit.. not only it dish out awesome special rules to critical unit, it also killed 2 special characters on its own. It left me wonder why the swarmlord had always been so effective, is it because I build my whole list around him?

Worst unit
The gargoyles had been tasked to disrupt the wolves back line. Going in the wolves line without support is suicidal. I was busy redeploying my line to deal with my collapsing flank. Leaving them stranded in enemy line.

Basically this week saw the Tyranids making strong headway into the campaign. This was led in big part by Marshall, the Beast of Lysios.

Because the Tyranids took Week 1, they will now get a bonus for Week 2: +1 to Seize the Initiative for all games in Week 2.

Week 2 starts Monday! Hope you Imperials are gathering by the fire and coming up with some sound strategy with your Necron allies!
Posted by Anything But Ones at 10:36:00 PM