And so we gathered for a ABO Apocalypse game at Titan Games recently. It was great fun gathering with friends to play a 40k Apocalypse game although some of us could not make it due to the Plaguefather. Nevertheless, we had great fun!

So it was the crazyrat and me (Chaos) against Skanwy and beef_nuggets (Imperium). Death to the False Emperor! It's me and crazyrat together again and our epic fellowship will continue with more fluffs.

We were playing with 4 objectives, 1 in each deployment zone and 2 in no man's land. 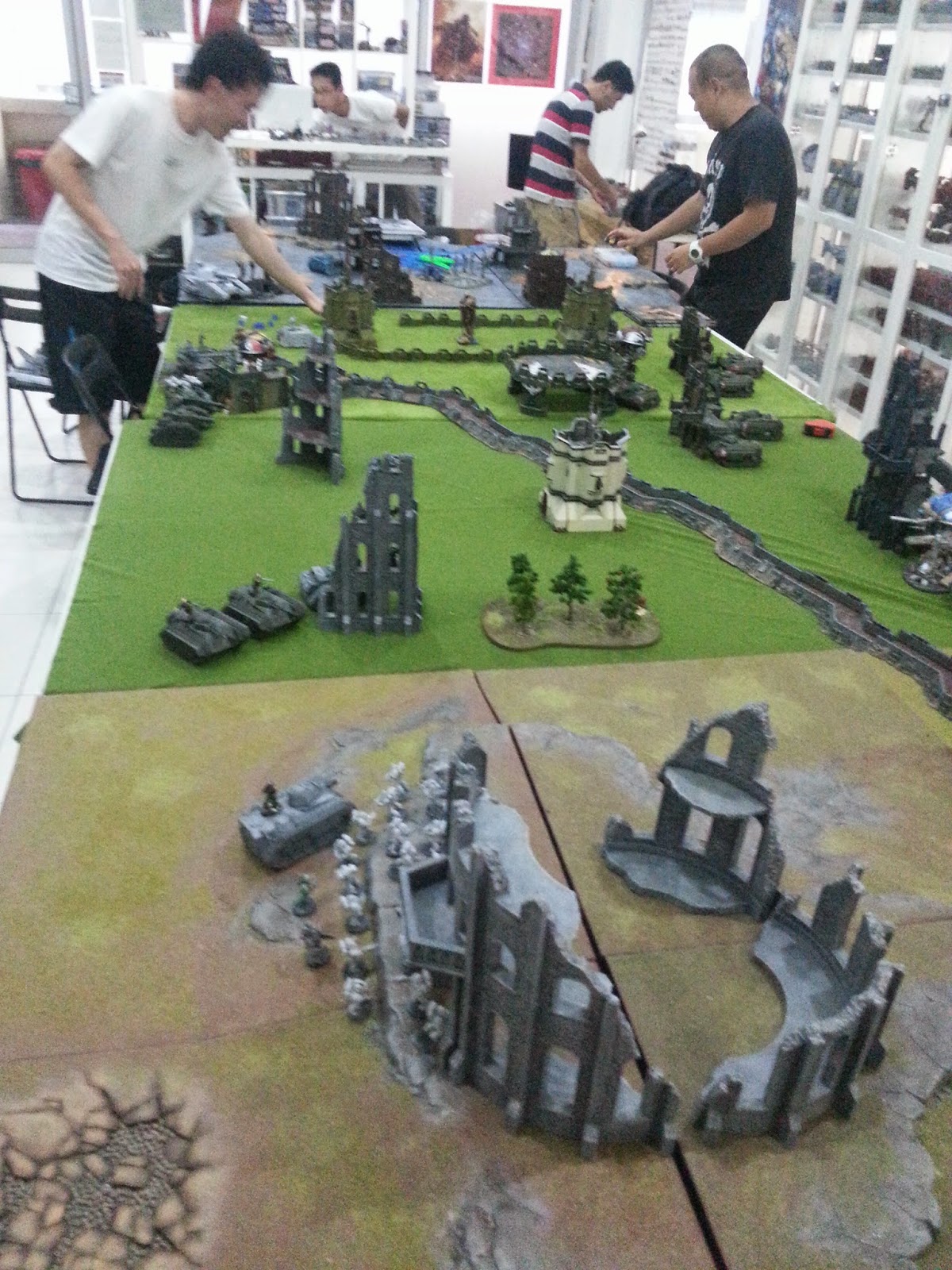 Setting up the units. 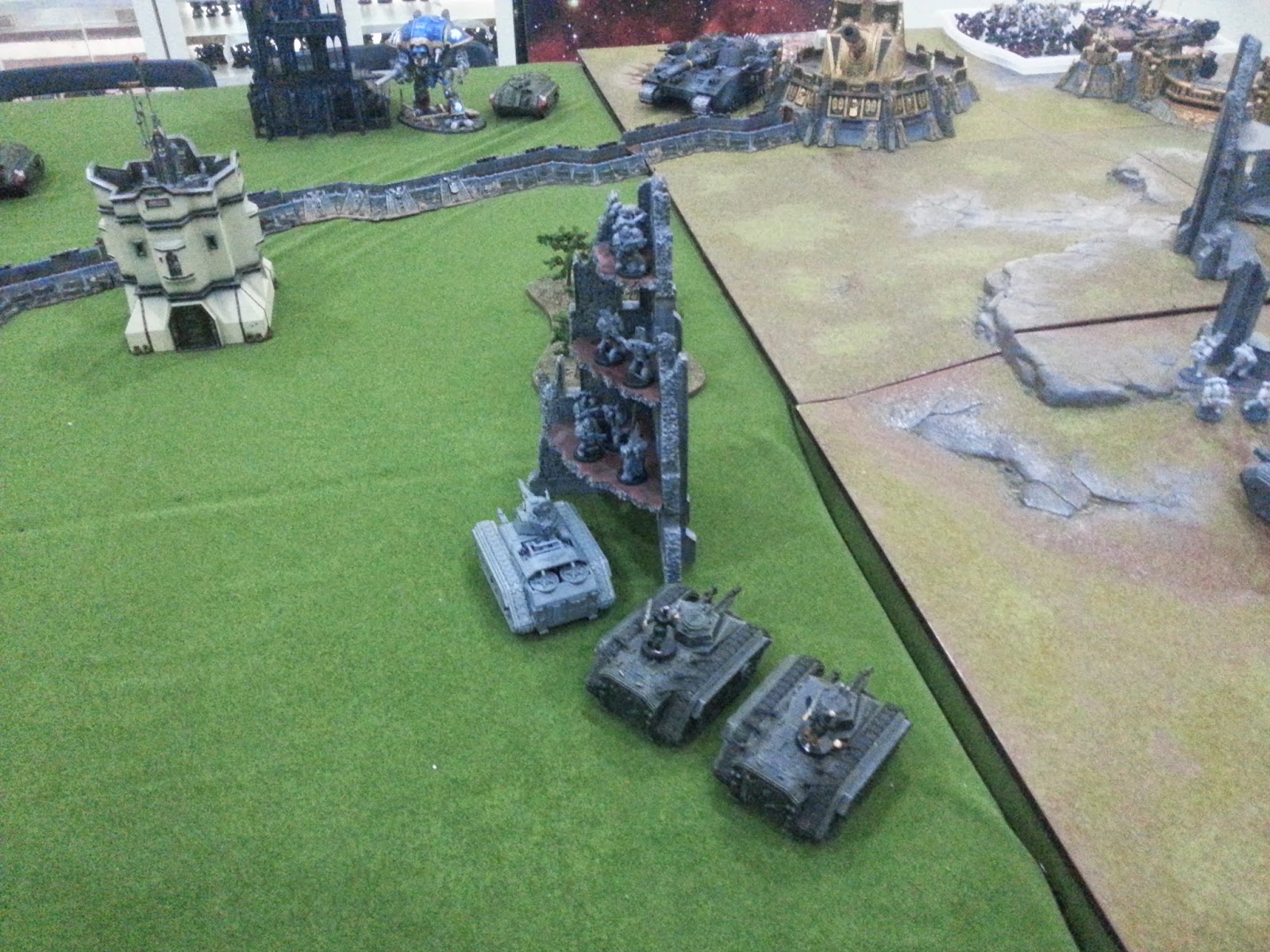 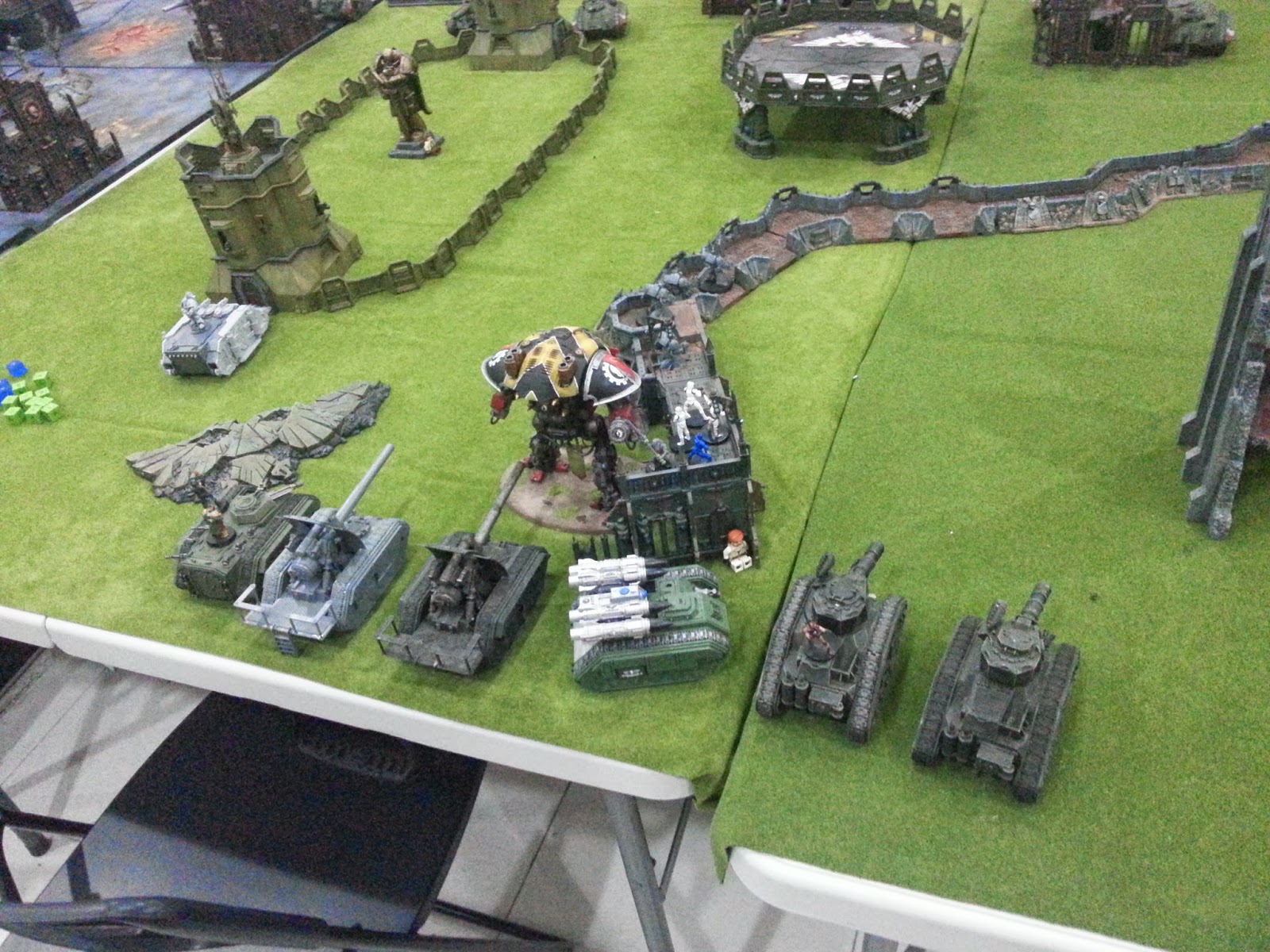 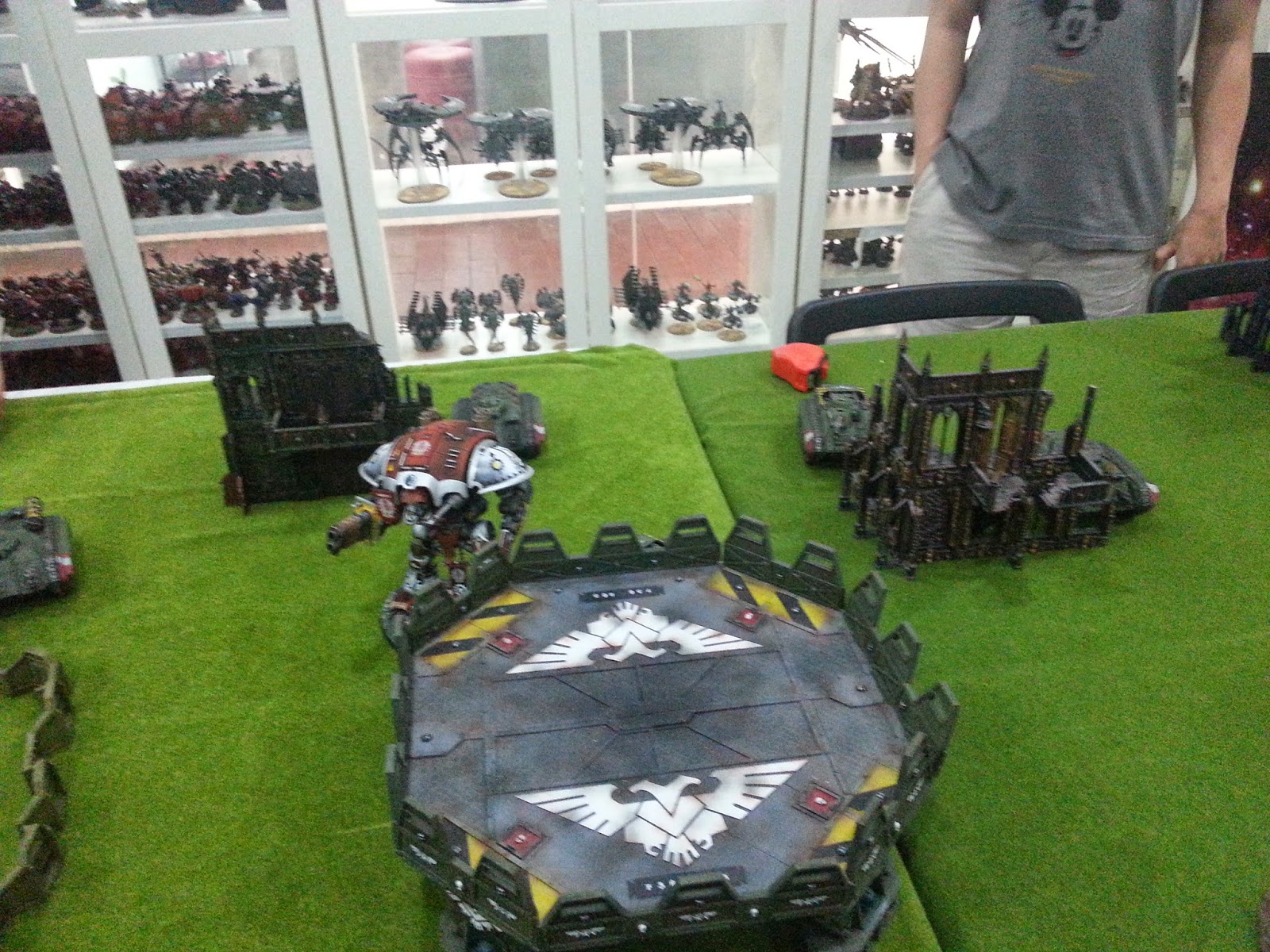 Opposite them are another Knight Errant and some Guardsman. Mephiston is behind the building. 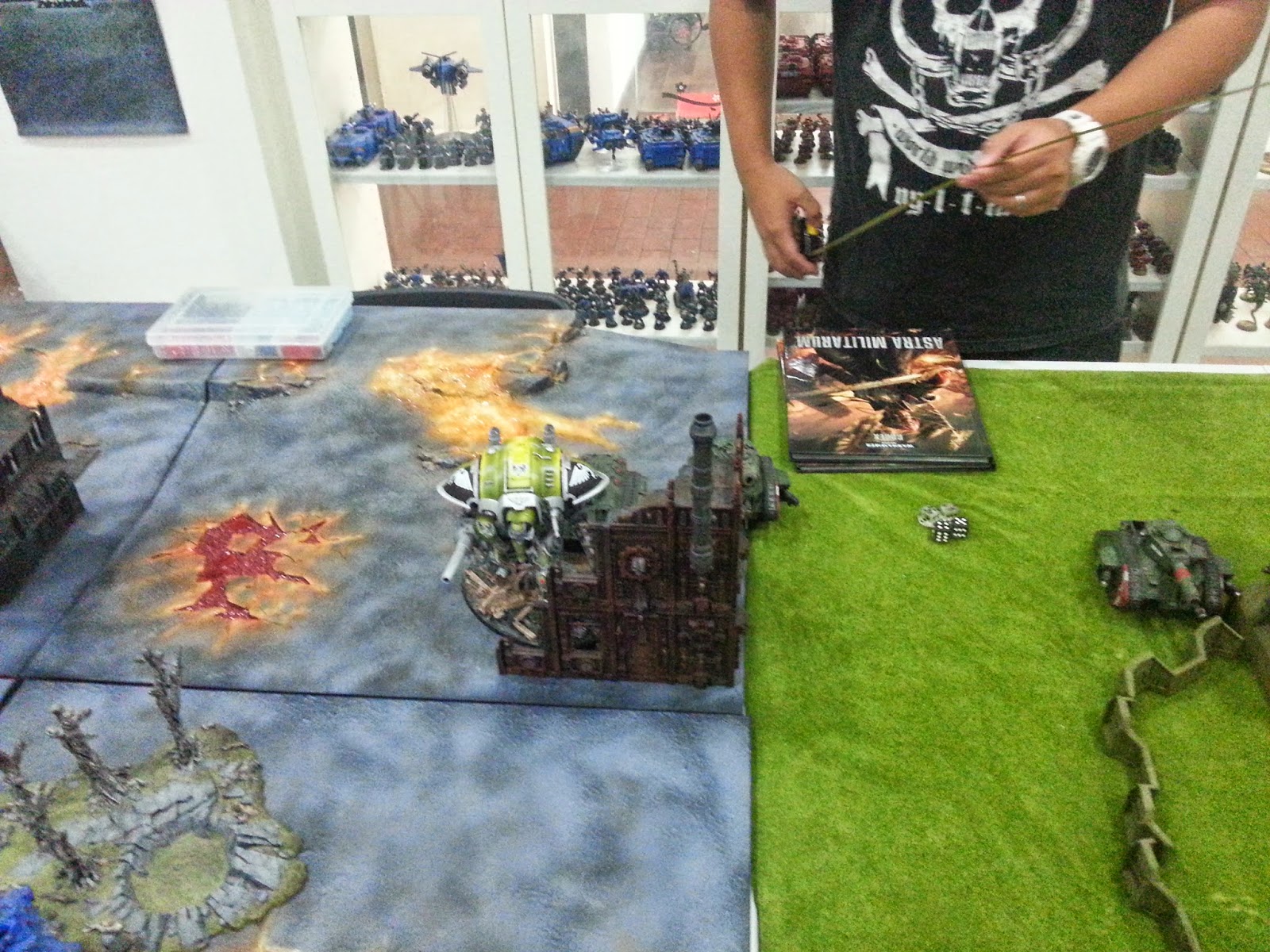 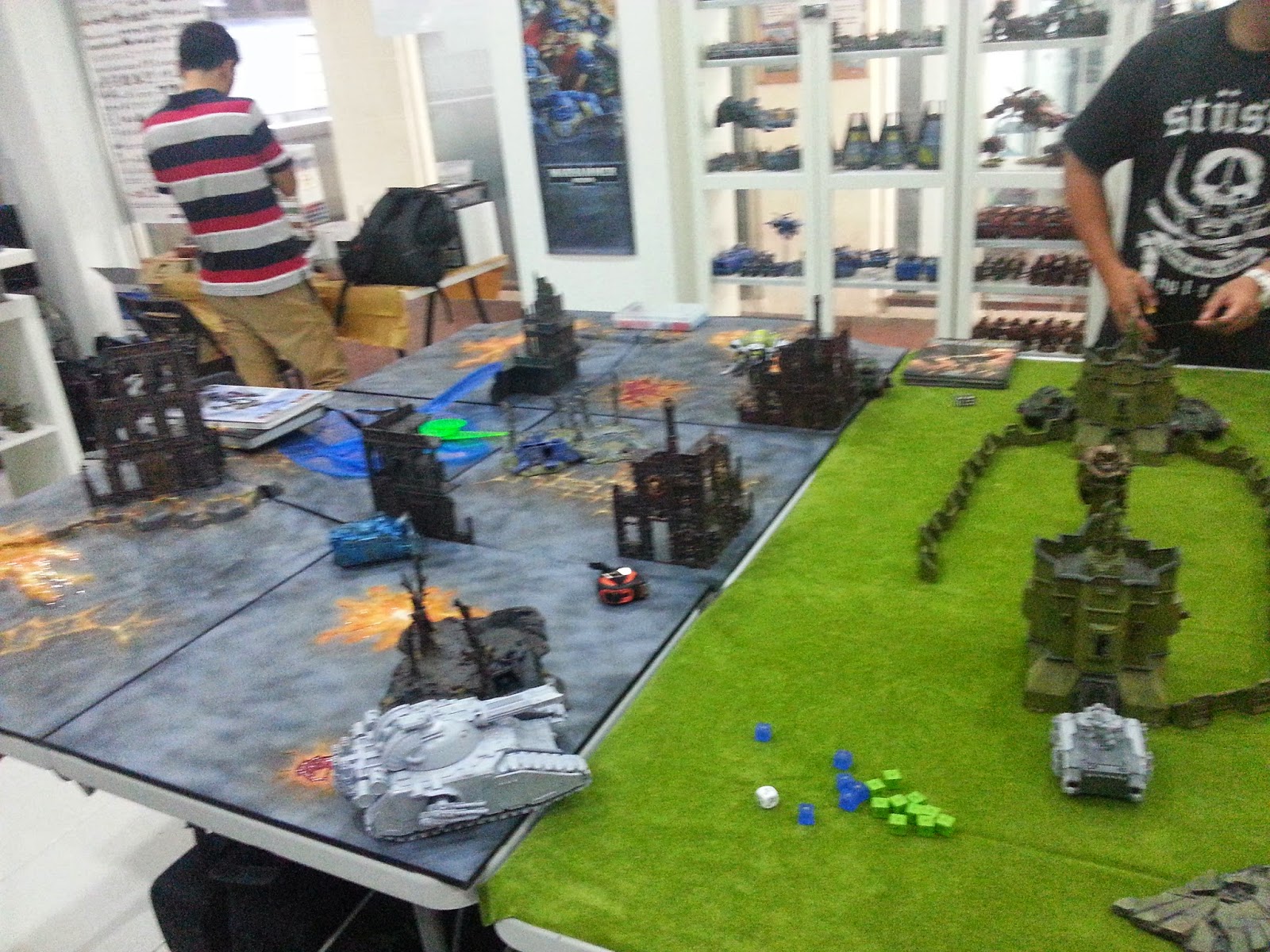 And so let the carnage begin! Imperium has the first turn.

Imperium starts by using 2 strategic asset points to throw 2 Orbital Strikes down on the Chaos lines targetting the Knight Titan and tanks. However, they were unlucky as both scattered and only killed some Terminators and dealing 1 Hull Point to the Knight Paladin. Then their Vendettas entered the field, and started blasting away, scoring a few Hull Points and blowing one Basilisk up. Mephiston tried to summon demons but failed. However, he suffered Perils of the Warp and lost one wound. The Dreadnought Librarian summoned a Herald of Tzeentch though. 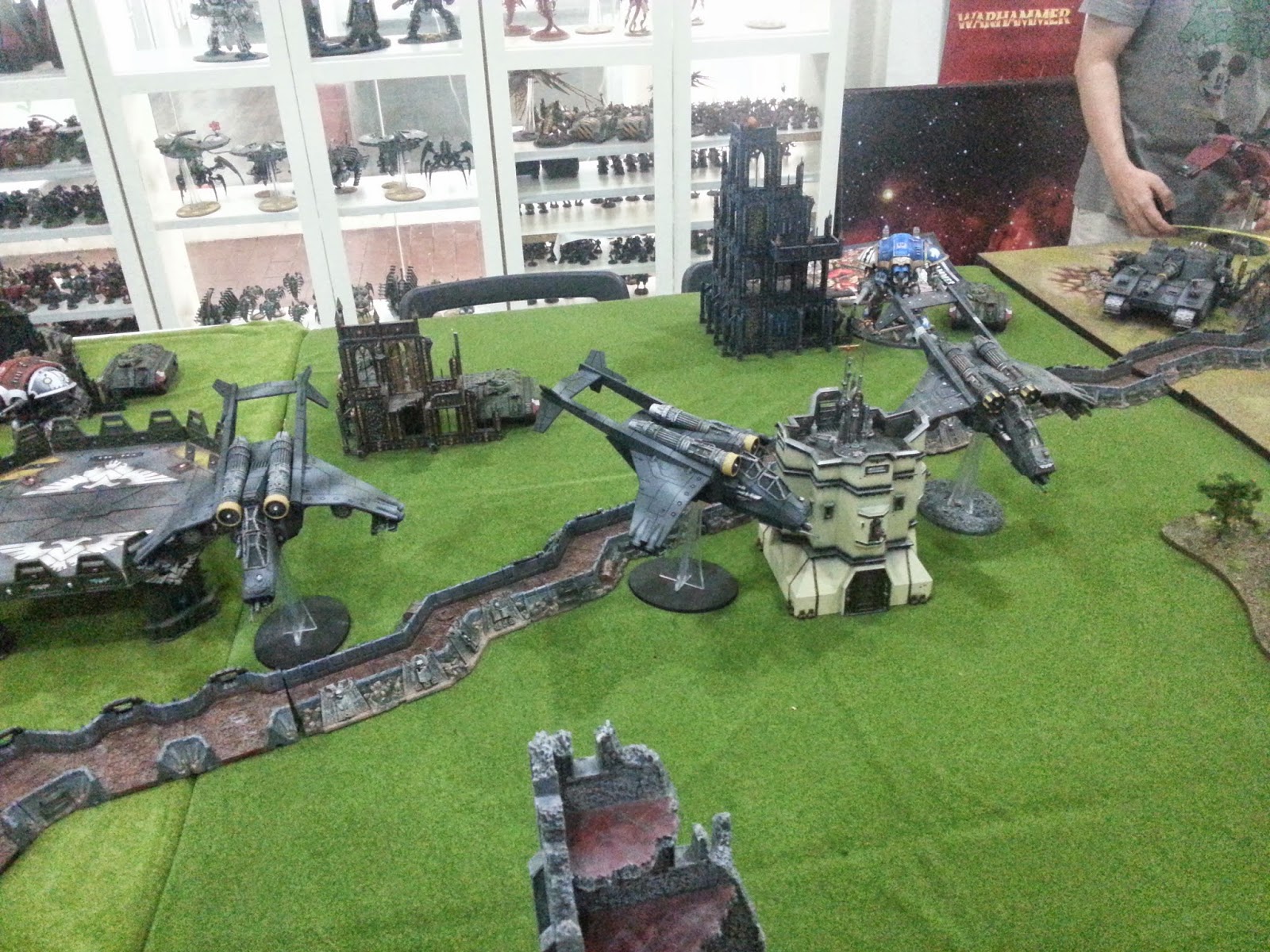 The Knight Titans advanced to shoot and managed to score a few more Hull Points. 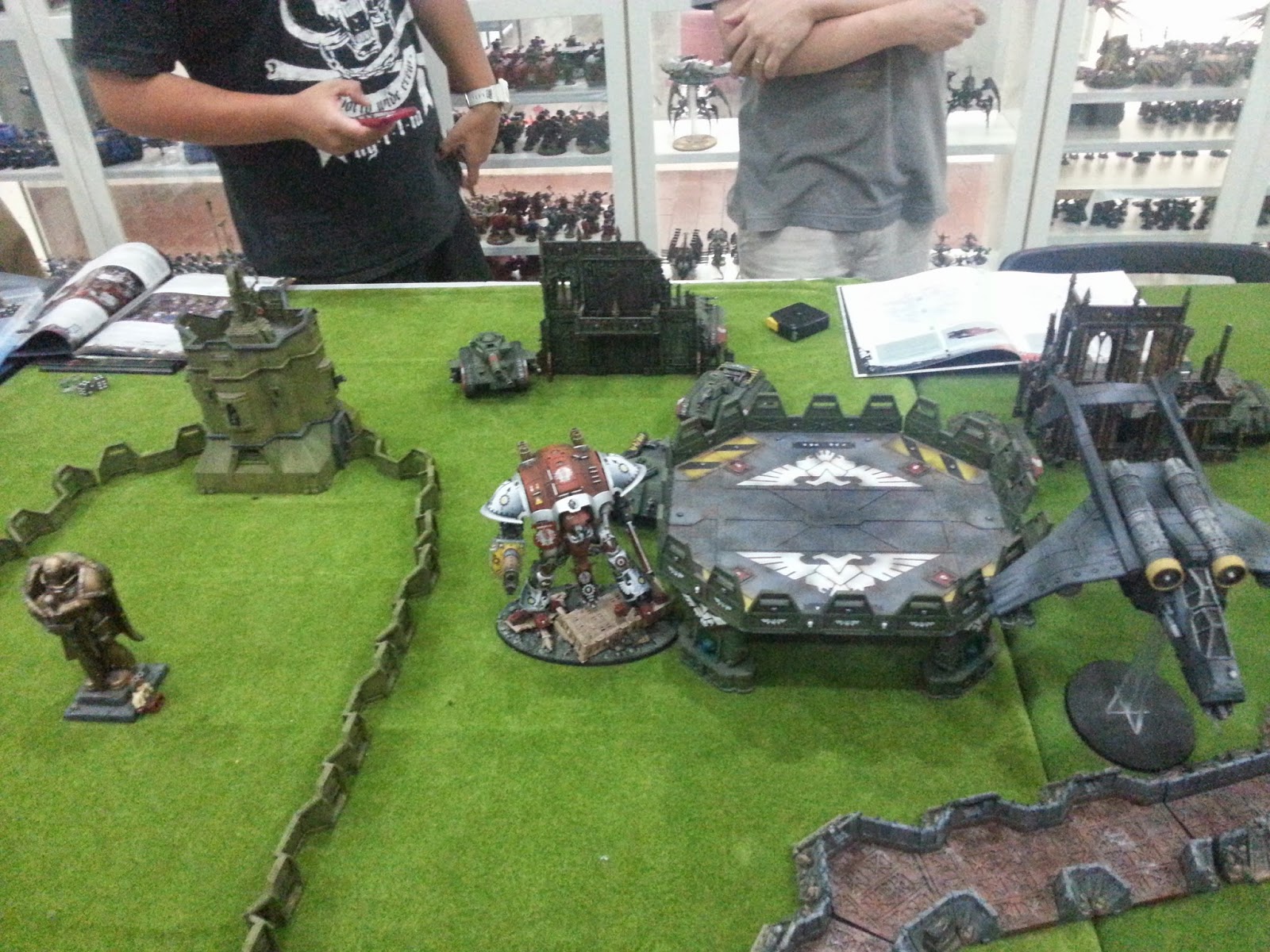 Chaos replied in our turn with the Tempestus Airborne Assault Group in 4 Valkyries rushing in to engage the Vendettas and Stormraven. Aerial Dogfight! We also called in our Strategic cards, using Tunnel Rats and Precision Strikes. I had 3 Veteran Squads deepstriking in on all the objectives and crazyrat had a few Drop-pods all striking in behind the Imperium lines. My Librarian (allied SM detachment) summoned demons (suffering from Perils and losing one wound too) and they too deep-striked behind the Imperium lines. 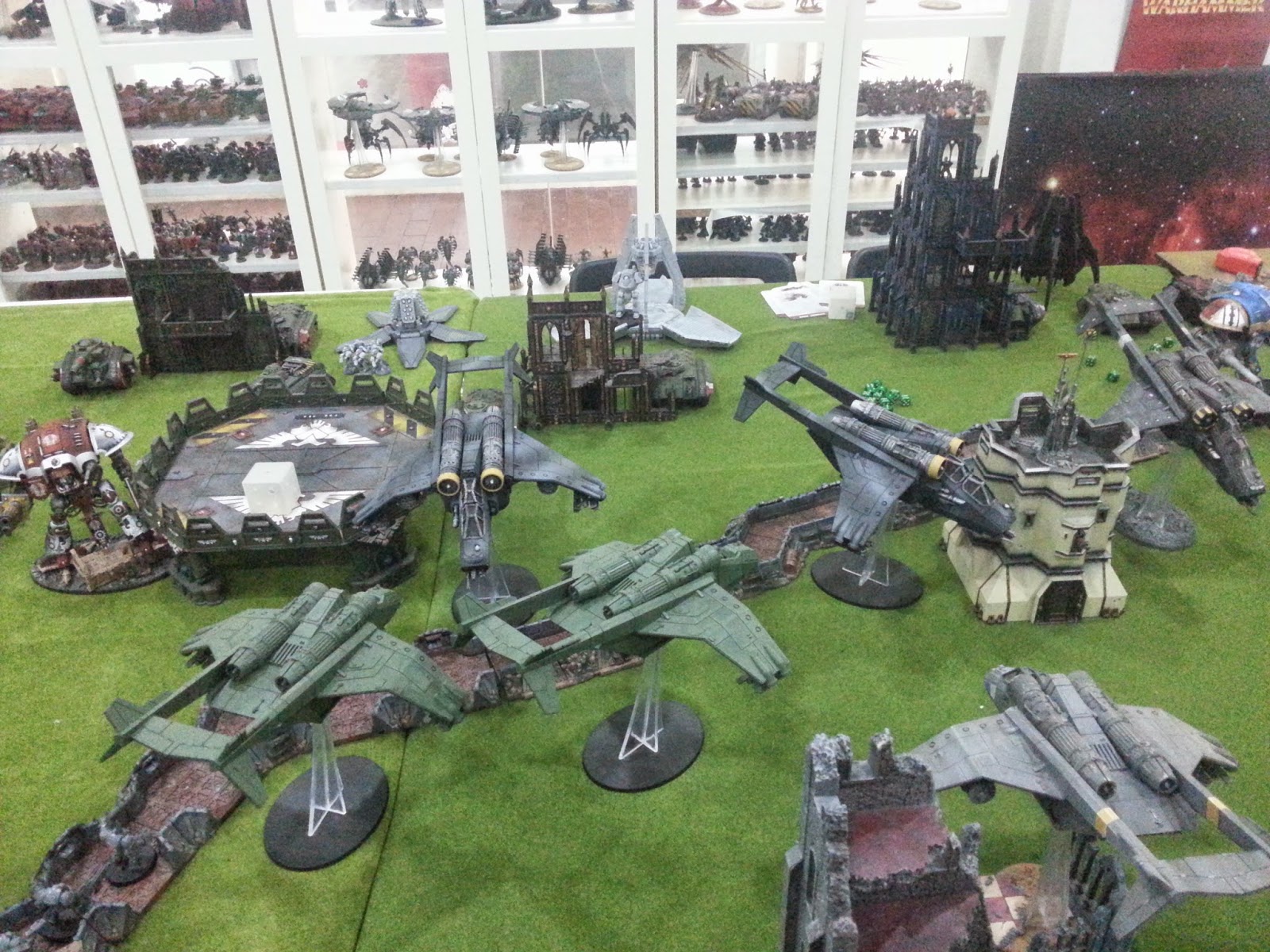 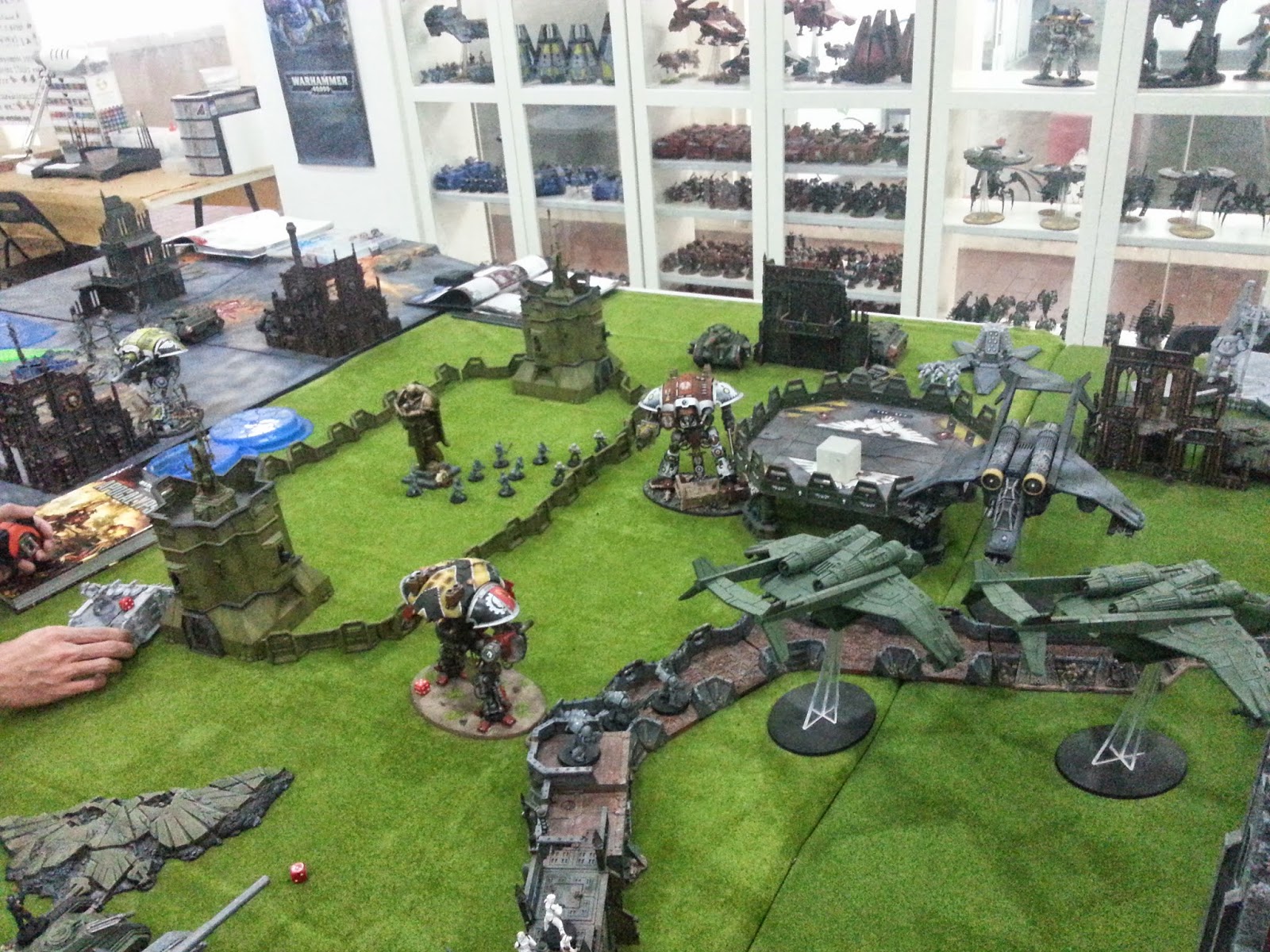 Knight Paladin strides out to meet the enemy. 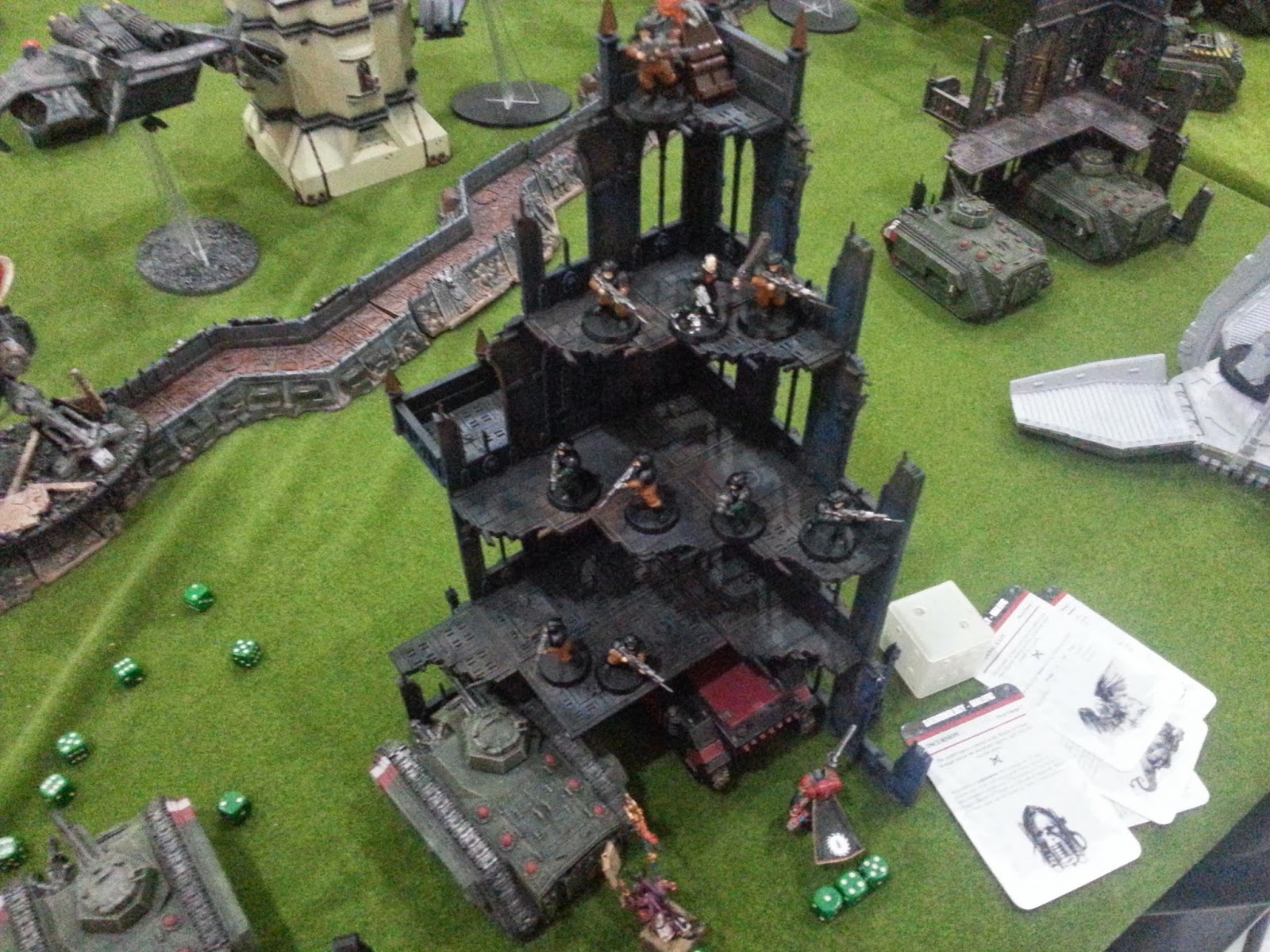 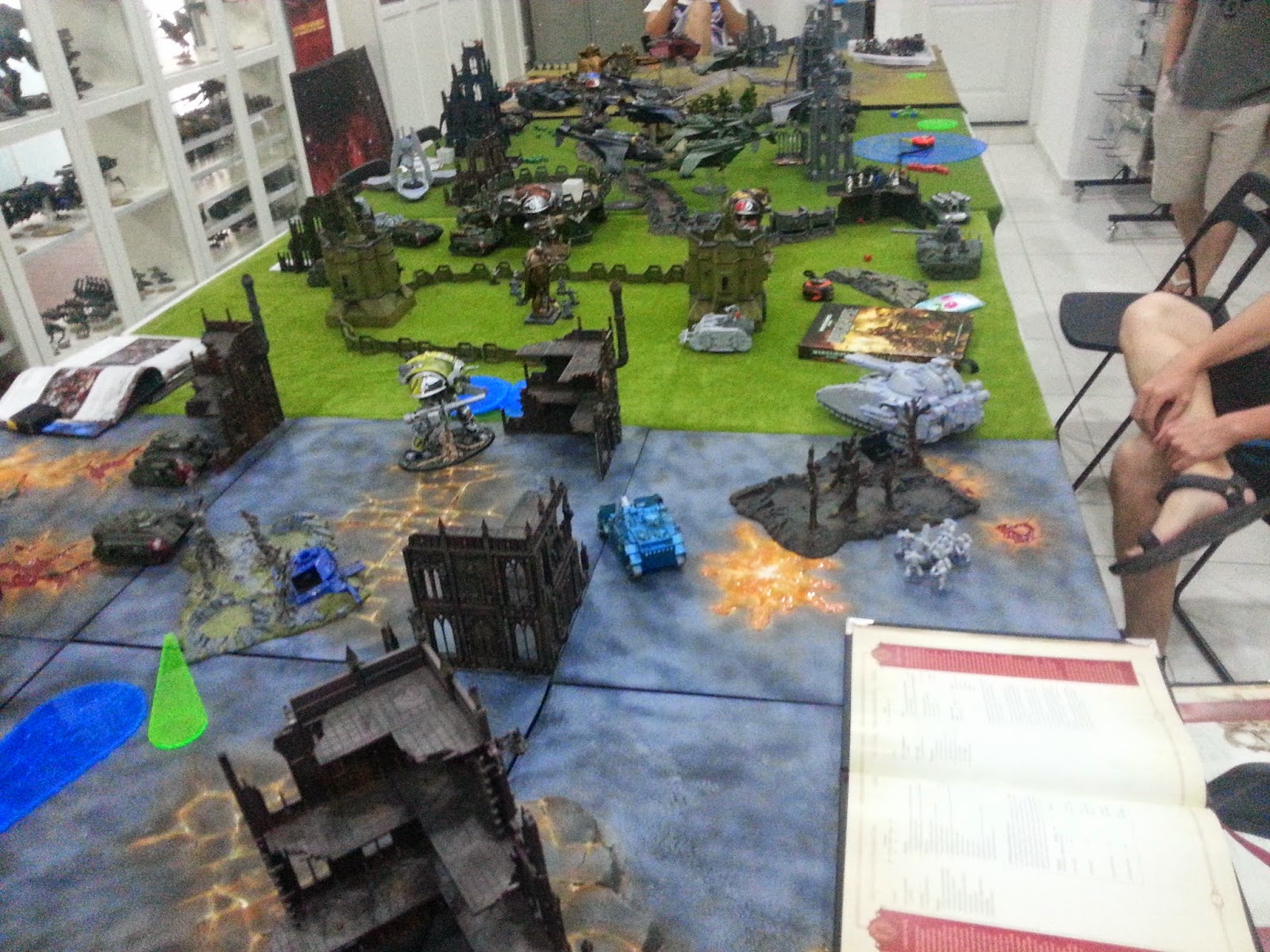 And crazyrat strikes again! The Fell Glaive shoots and spectacularly rolls a 1 to hit. Shooting from the Chaos side dealt little damage too besides some Hull Points including 1 off the red Knight Errant. Shooting from the Veteran Squad who had deep-striked in on the Imperium objective saw 2 wounds taken off Mephiston while Alpha Legion shooting saw the Herald die. The Deathstrike Missile Launched on a 5 but dealt little damage too.

Imperium Vendetta started to rampage through the Chaos Traitor Guard lines, taking Hull Points off the vehicles, including the Chimera holding the Chaos Warmaster, Beloved Leader Kim Jong One. The red Knight Errant charged the Chaos Knight Paladin and smashed it in a single turn. I rolled 3 misses and beef_nuggets rolled 4 hits on the D weapon.. Gundam Fighto! The blue Knight Paladin charged the Chaos Veteran Squad holding one of the objectives and wiped them out and itself stood right on top of the objective to claim it. 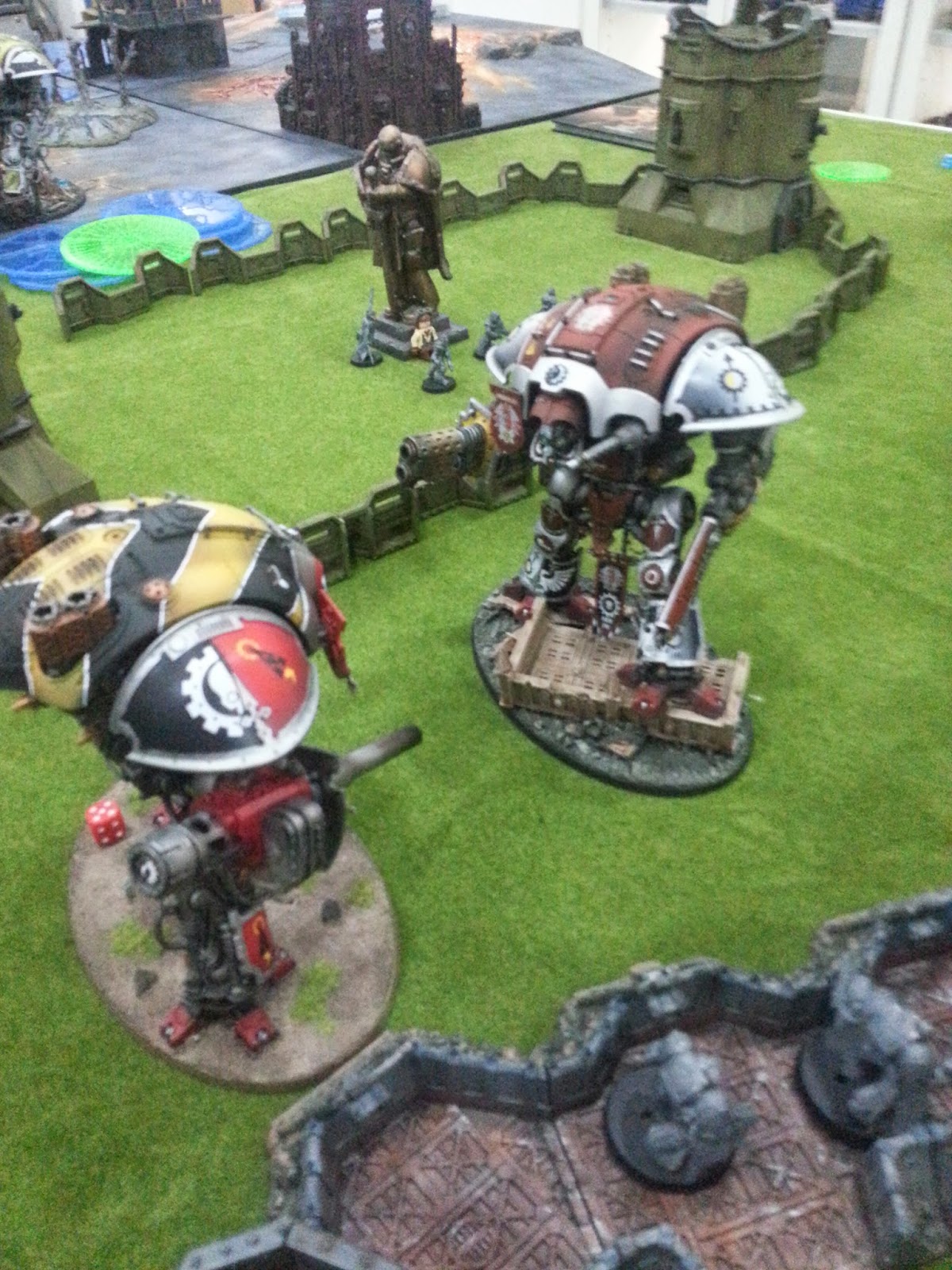 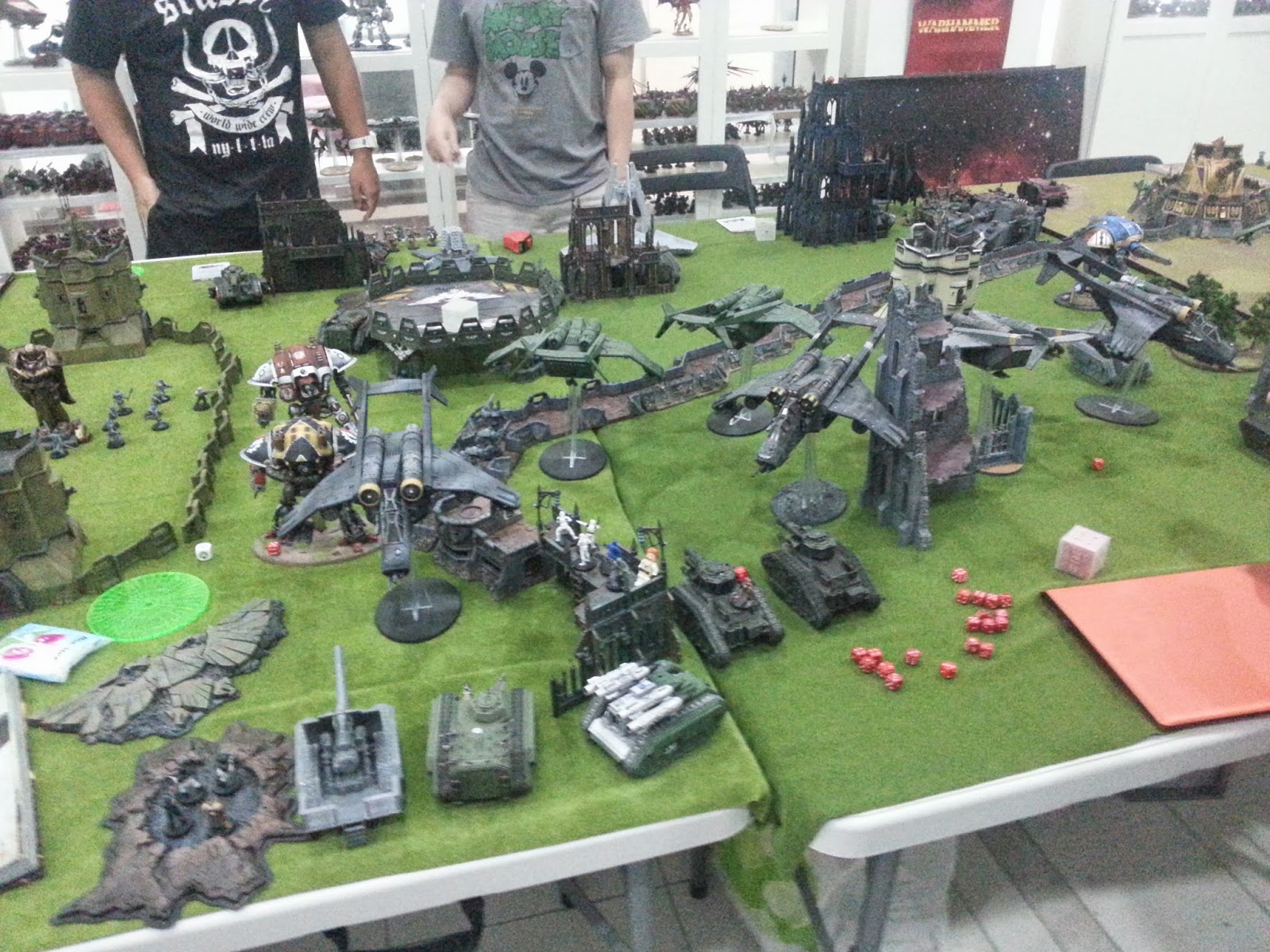 Imperium began to clear up their lines with Veteran Squads coming out to shoot the Chaos troops that had deep-striked in behind them. Mephiston charged the Veteran Squad holding the Imperium objective and killed them.

Chaos tried to reply with the Valkyries trying to shoot up the tanks but failed to do major damage. With Imperium engaging the Chaos lines with only Knight Titans and Vendettas, it was quite difficult to shoot them down with high Armour values and lack of Skyfire. The Librarian summoned another Bloodletters unit and deep-striked them onto the Imperium objective again to claim it.

Imperial Vendettas again rampaged through the lines of the Chaos, taking Hull Points off the tanks. The red Knight Errant stomped its way up to the Chaos Warmaster and stomped him into the ground. The yellow Knight Paladin charged into the Fell Glaive and ended its sorry outing. Crazyrat was happy the Fell Glaive died and causing a catastrophic explosion but he scattered it into no man's land and killed nothing. So much for the Fell Glaive...

Shooting saw the Chaos Veteran Squad holding the second no man's land objective dying. All round, the Chaos lines are crumbling fast. 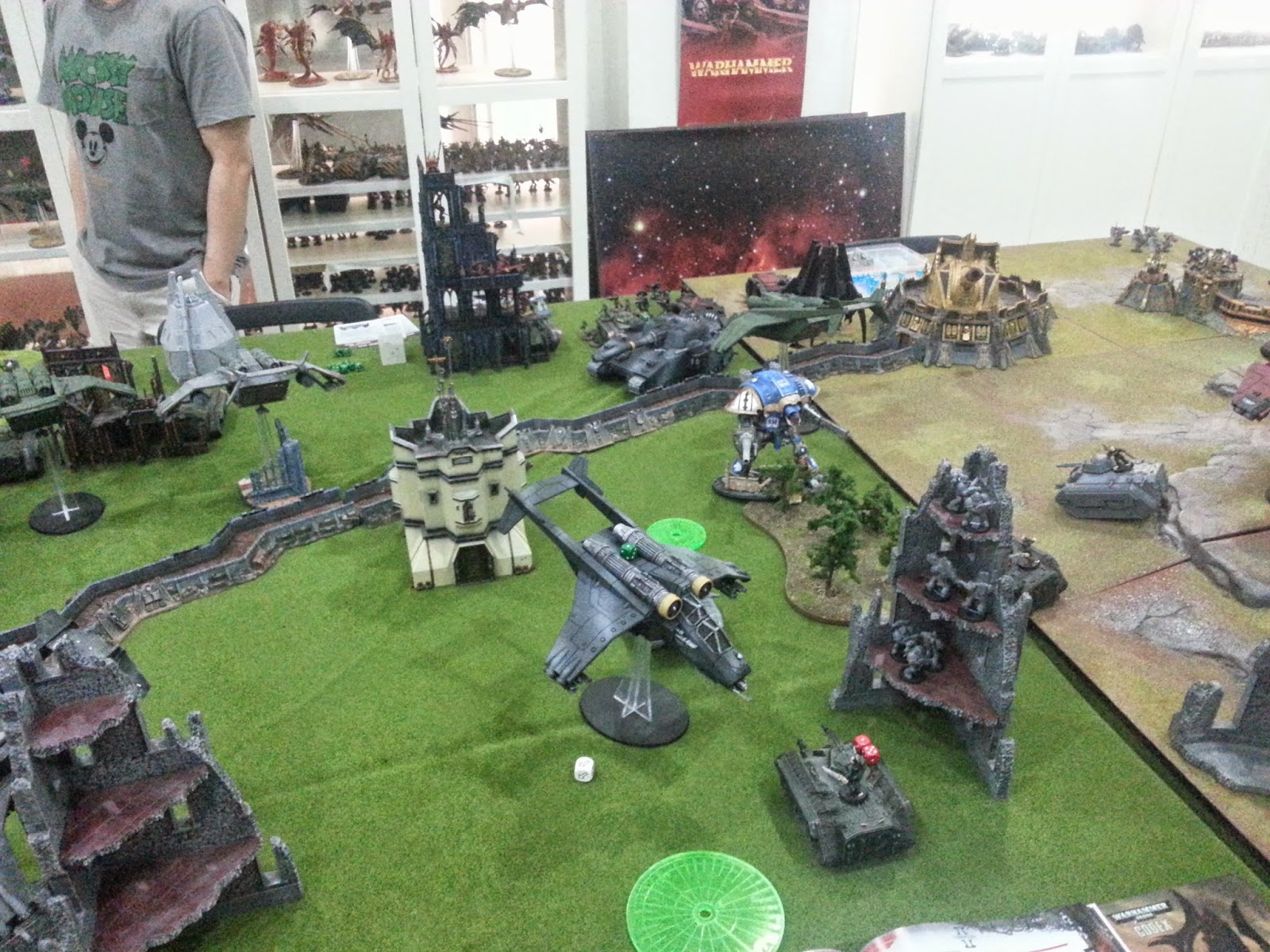 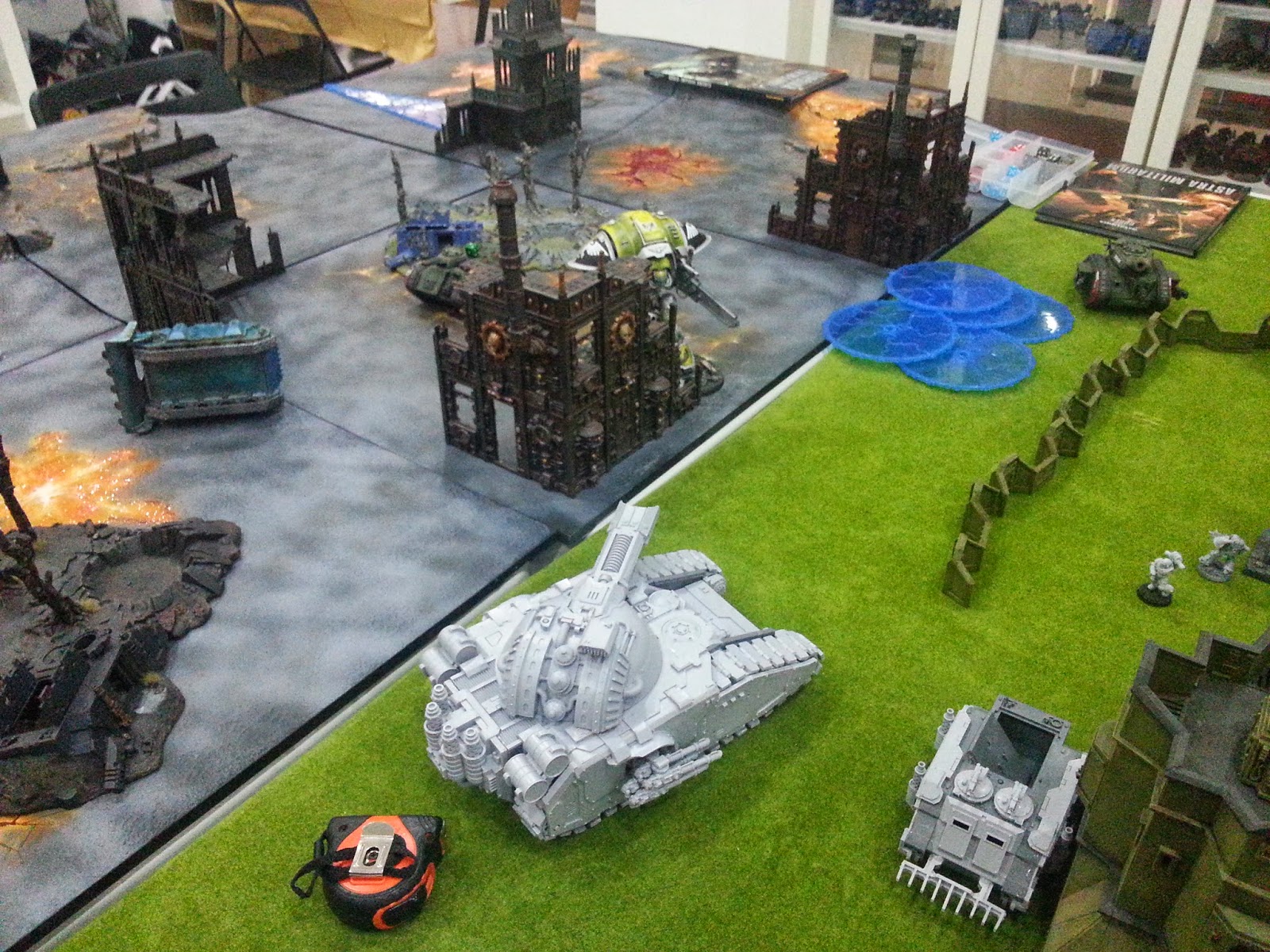 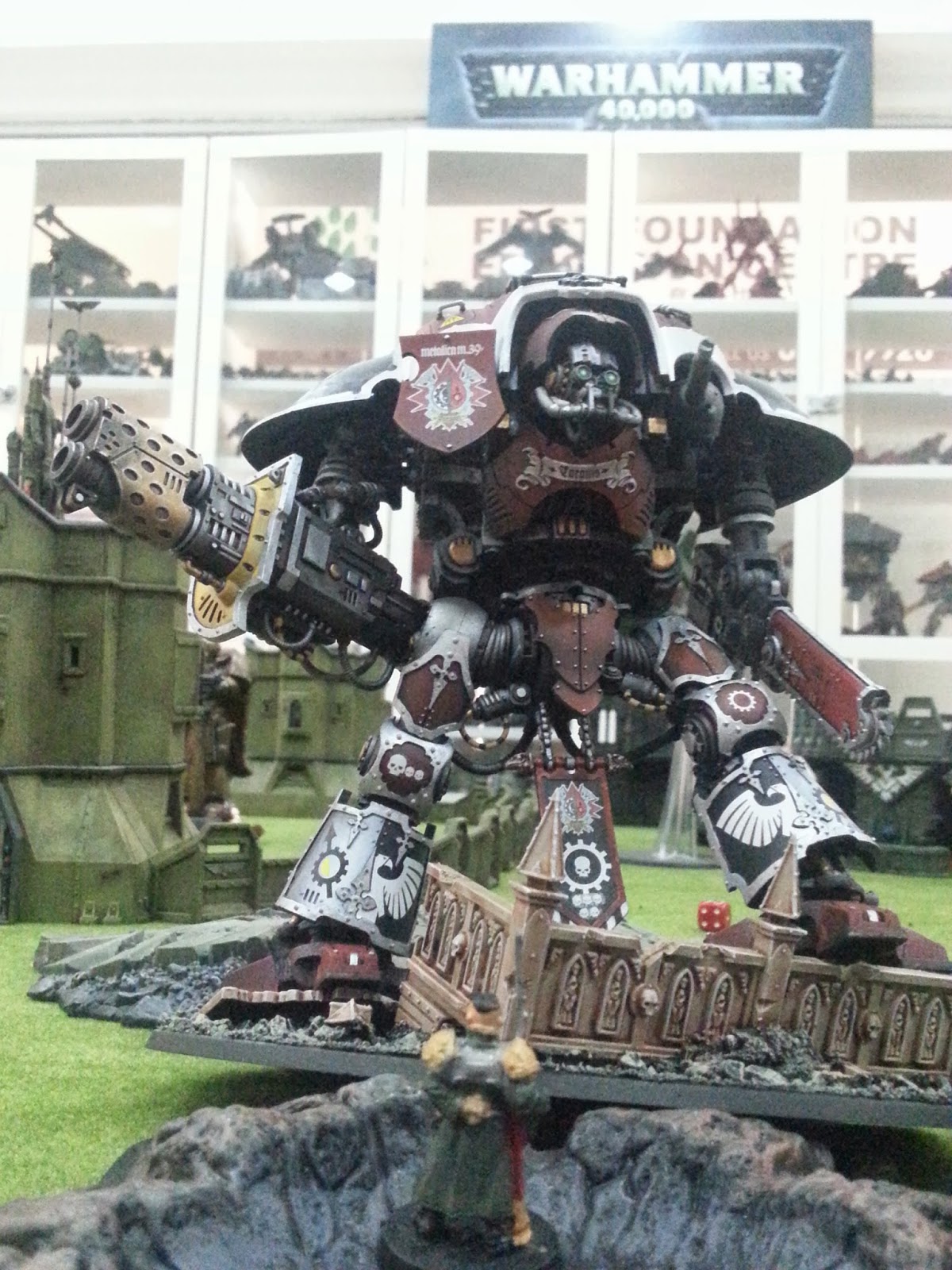 Defiance to the last!

By this time, crazyrat's Alpha Legion only had the drop pods and a saboteur left on table. Chaos tried to salvage by Grav-Chute Insertion a Tempestus Scion squad onto the Imperium Objective. Another Valkyrie held one more objective while the Valkyries blew up more tanks.

Imperium has the upper hand now. The Knight Titans are unstoppable and they are rampaging through the Chaos lines. Even the Shadowsword was not dealing as much damage as them. The red Knight Errant killed the Enginseer holding the Chaos objective and held it. More shooting and charging by the Blood Angel Space Marines saw the Imperium objective secured.

Chaos could not do much with only the Valkyries left on the field. They could only shoot 1 more Chimera up and we decided to call it a game.

We concluded that with nothing left to stop the Knight Titans, they could easily secure the objectives by the end of turns 5 and 6, giving them an additonal 8 points for a total of 17.