So we gathered for another round of Fantasy lately. As Sam could not make it, I took 5k of Dark Elves while crazy_rat and the beardy_one took 2.5k each.

As I had 5k to play with, I decided to bring a contingent of each unit so that we can see what each of them can do. Sadly that is the wrong way to approach army lists but it was fun nonetheless.

The terrain was set up with a tower in the middle and this proved quite crucial later on. 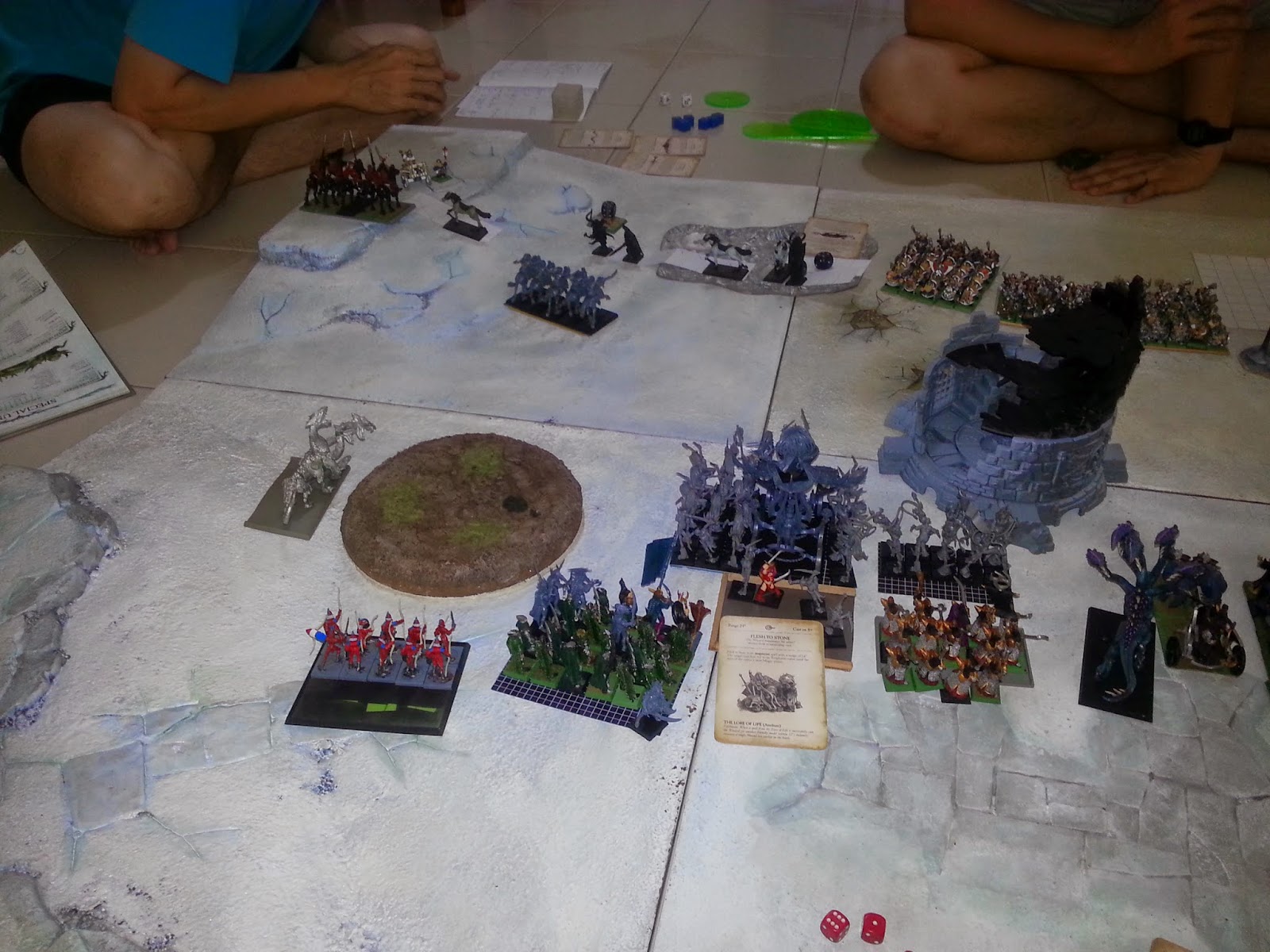 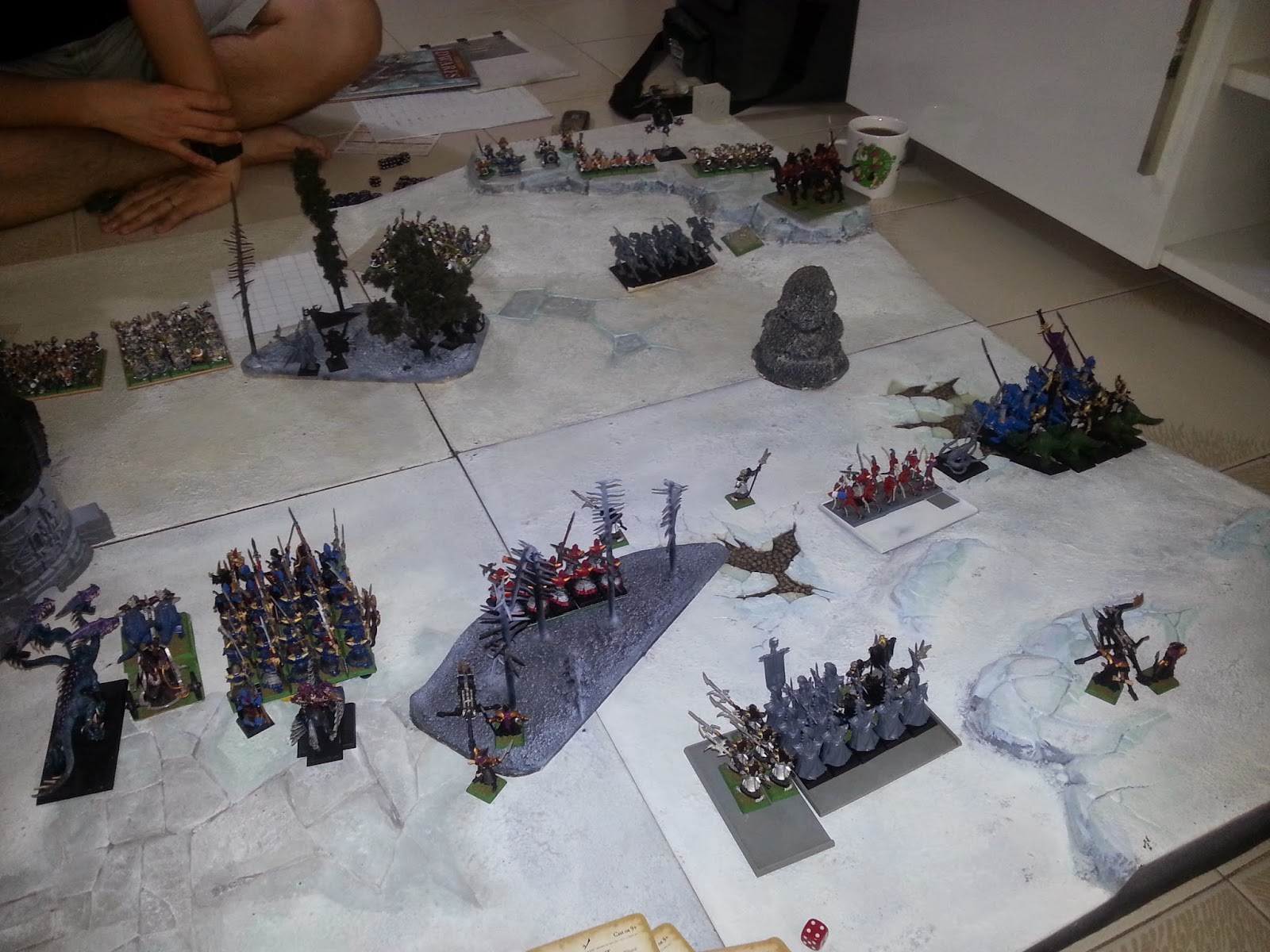 As you can see, my units are split in the middle as I was moving up as I had to circumvent around the tower. As it turned out, the Witchelves block and Corsairs could not support the Spears and Black Guards. I had wanted to hold crazy_rat's block at the flank of the tower while my Witchelves swung around the tower like a clock's hand and attack his blocks from the flanks.

During my turn, I charged the Chariot into the Eternal Guard block coming through the forest as I was pretty close to his lines and wanted time to bring up the Black Guards and Sisters of Slaughter.  With 4 ranks of Eternal Guard able to hit my chariot, I had thought that my Chariot could survive as crazy_rat's Eternal Guards are S3 and needed 6s to wound my chariot. In the meantime, I moved my Hydra to charge in on the next turn and the Black Guards moved in closer while the Spears were 12 inches away. Thus, in his turn, the Eternal Guards were still in combat and would have either come closer to me or remained within distance of my Black Guards for my Black Guards to charge in the next turn together with the Hydra. My Hydra was 12 inches away from Beardy_one's Ironbreakers and he'll need a 9 to make the charge.

In the end...everything went wrong. The Eternal Guard produced 7 wounds on my Chariot and I promptly failed enough for the Chariot to be destroyed. Crazy_rat decided to overrun and he rolled double sixes for his Eternal Guards to impact my Spears. Something that I really did not expect given his tendency to fluff his rolls. Then in the following turn, Beardy_one's Ironbreakers tried a charge on my Hydra to prevent the Hydra from charging the Eternal Guards in the flank... and the Ironbreakers made the roll of 9. In the following combat, the Hydra died and the Ironbreakers overran into my Spears also. My Spears managed to hold by passing a break test of 5 with a roll of 3. Meanwhile, Daniel's Gyrocopter steamed the Black Guards, killing 14 out of 21 of them. 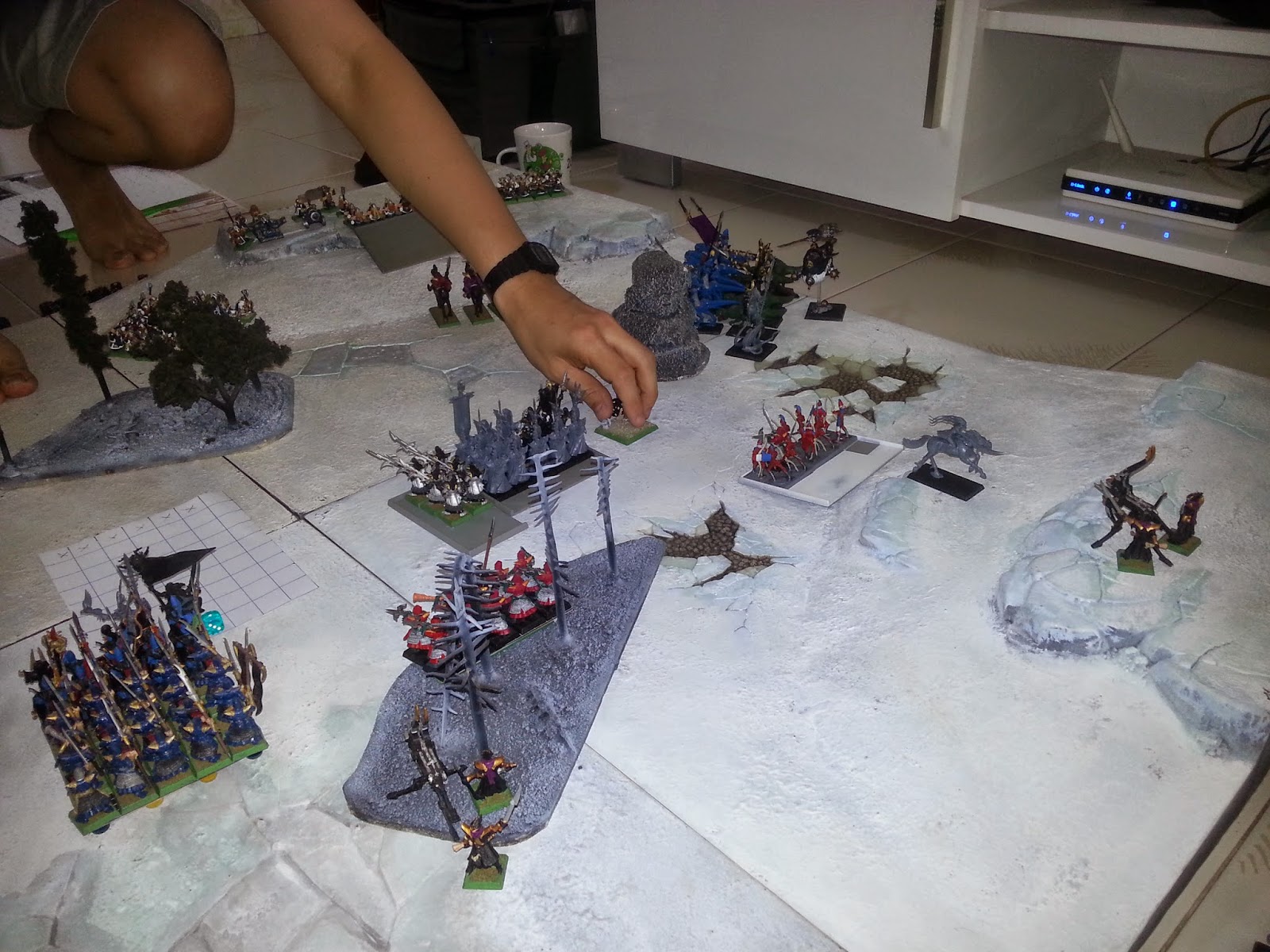 It went worse for my right flank as enough Eternal Guards had died such that my Black Guards could not charge them in the flank during the next turn. My Executioners charged the IronBreakers as they tried to support the Spears which held my lvl 4 Sorceress. The following combat saw the Spears and Executioners break from combat and both were ran down by the Eternal Guard and Ironbreakers. Here I made a crucial mistake. With Throne of Vines out, I decided to cast Flesh to Stone on my Spears. However, I should have thrown 6 dices instead of 3. It got dispelled with a dispel scroll when I should have aimed for the IF. If my Spears were T7, they would have survived long enough for my Black Guards to come in again.

On the left, the Pegasus lord charged into the WE archers while the Witchelves wiped out the dwarf Warriors holding the line. The Gyrobomber came and bombed the Corsairs, killing half of them in a single hit. I was taking a punishing time from the Gyrobombers. Here, the Medusa proved effective. The Medusa's shooting substitutes Toughness with Initiative and is perfect for dealing with the Gyrobombers. Unfortunately her range is very short, only 12 inches. But she managed to kill one Gyrobomber in 2 turns while the rest of the RBTs shot the Gyrocopter down.

In the end, I had broken through on the left while the Eternal Guards and Dwarven blocks broke through on the right. Elsewhere, my Dark Riders and Warlocks were wiped out by the combined shooting of the Dwarves and WoodElves. Even when 4 Dark Riders charged into 7 Dwarven Crossbows, they were kicked out and ran down.

My Witchelves turned round the tower and tried to face down the Eternal Guards. but with my infantry blocks disappearing to the dwarven bombing, they had no support and suffered counter charges in both flanks by the dwarves. Eventually all 24 Witchelves died while wiping out most of the remaining Eternal Guards. And the game ended on this note.

The battle was very surprisingly as some special rolls were made that changed the battle. With my Spears 14 inches away from the Eternal Guard, I decided to charge my Chariot in as the Eternal Guard would have to hit on 4s and wound on 6s. With impact hits and the lack of ranks from being inside a forest, I would have held the Eternal Guard in place for that one crucial turn while my Black Guards were marching in closer. Instead, the Chariot got destroyed and crazy_rat rolled high enough to impact my Spears. Grudge match time!
Posted by JaeRoler at 6:07:00 PM