Had a really good weekend with Youcai. We played 2500 points worth of Fantasy. I was commanding High Elves while he was commanding the Tomb Kings. Great news is that YC is actually slowly but surely painting his skeletons. This is awesome!

YC posted some really random pictures earlier so I am going to reorganise them into the correct order so we can actually see how the game went. YC, please add comments if I missed anything out.

All pictures have their description on the bottom of the pictures. We rolled for the mission type and got Pitched Battle so it was 12" deployment from each side. Placed 3 forests which counted as Mysterious, 2 Hills and 2 Arcane Ruins (you can roll up to 4 D6 for channelling but for each 6 rolled on more than 2 dice, you take a Miscast). 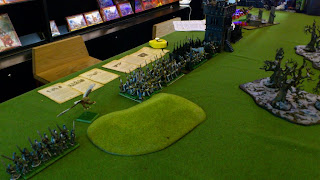 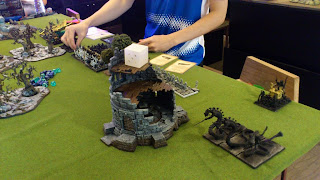 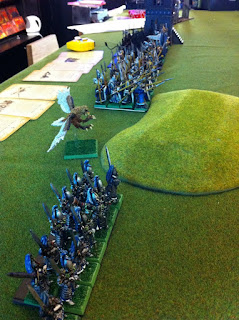 My deployment was fairly straight forward with the Swordmaster taking the right flank to face off his Necropolis Knights. 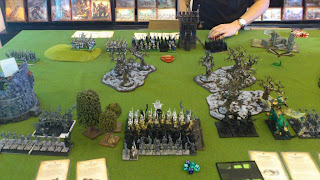 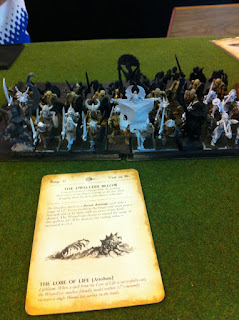 First turn magic phase I casted The Dwellers Below on his unit of 80 Skeletons. For some reason, YC's rolling was really low, leaving most of his 80 men intact (Strength Test - so YC had to roll below 3 or die) 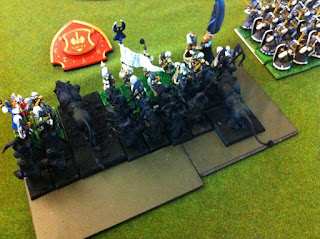 In that same magic phase, my Level 4 miscasted and killed off 9 of my own White Lions. What a lovely way to start the game. 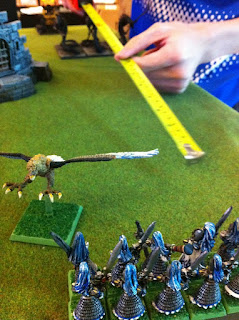 Turn 1 of YC's turn saw him charging his Necropolis Knights at my Great Eagle. I fled to draw him into my Swordmasters. YC rolled quite low leaving his unit quite far from mine. 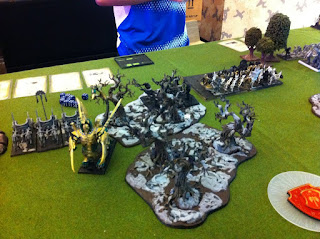 YC moves his nicely painted Necrosphinx up the middle supported by the Chariots. Meanwhile his Ushabti with Great Weapons trudge through the big forest (rolled a 2 on the Mysterious - they now cause Fear). 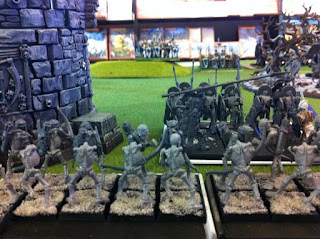 Arrows took a few of my Spearmen down. 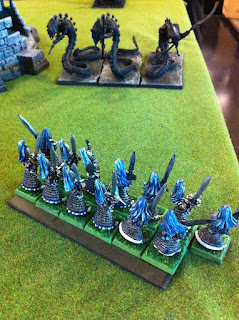 In my turn 2, I charged my Swordmasters into his Necropolis Knights and ended up short. This side of the board must be have bogs... 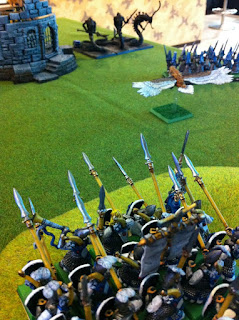 Regrouped my Eagle while my Level 2 High Mage moved up the hill to gain vantage for his spells. 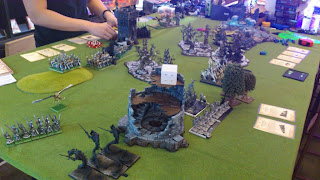 A view from YC's side 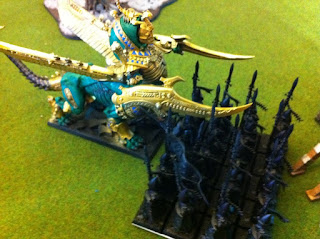 Turn 2 YC charged his Necrosphinx into my Spearmen. This was going to be a grind. I knew I had to sacrifice this unit to hold the flank 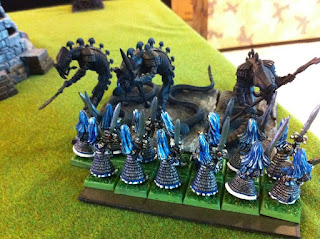 YC also charged in his Necro Knights into my Swordmasters 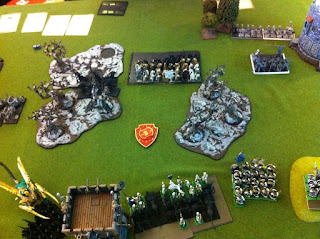 A view from the top at the bottom of Turn 2 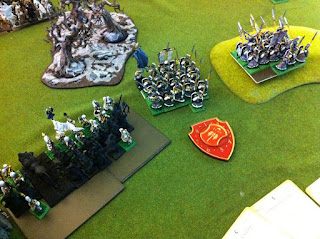 Another view of bottom of Turn 2. This is where my phone ran out of battery so I had to turn to YC's camera. Some shots have been included above. 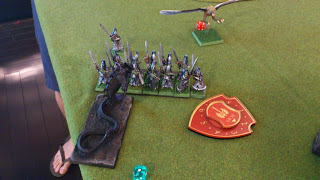 Even with a charge, I am surprised to see how the Swordmasters just cleave through units. I lost 1 Swordmaster to 5 wounds for his Knights. Poof! 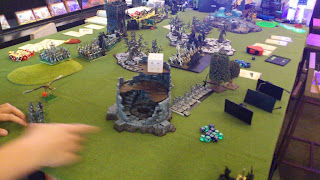 A view from the side after removing the Knights. 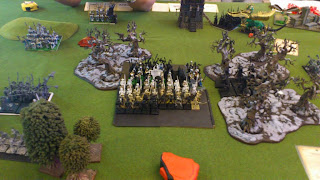 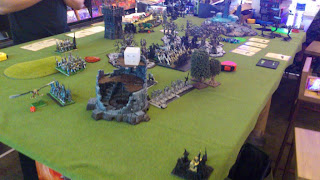 Moved my other units to support the White Lions. Eagle tried to charge the Casket but no luck 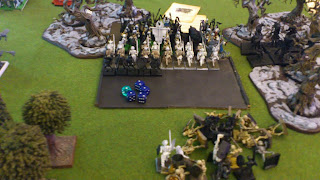 Chop chop and Skeletons die by the droves. However, YC did forget about My Will be Done which would have raised his skeletons to WS6. His Tomb King strikes with 5 attacks (fencer blades). Need to hits on 3's, he rolled the above (1,1,1,2,2). LOL! It was also here that YC realised that he could not charge my flank as the Ushabti was moved too far in front. A waste 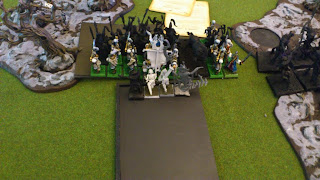 The grinding match keeps on going. 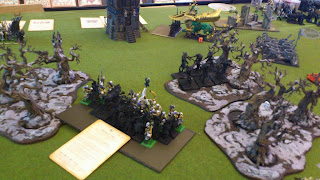 After destroying the unit of Skeletons, I reformed to face his Ushabti. 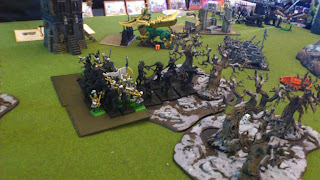 And charged him in the flank 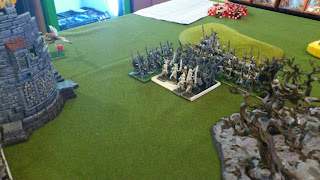 Charged my Swordmaster, spearmen and another unit of spears into his Tomb Guard. 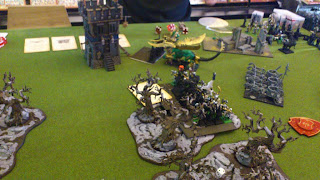 You can see that YC's Necrosphinx still tied in combat with my Spears. Wow that is going to take forever. After despatching the Eagle, the Chariot moves up to assist the Necrophinx to take out my Bunker. 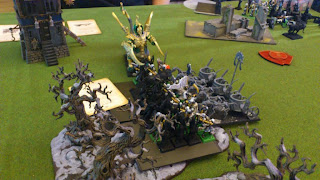 And charge they did in YC's Turn 4. 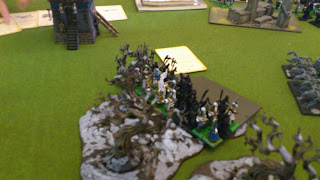 And again the bunker of madness prevails. Amazing. 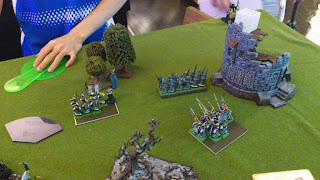 Final turn of the game basically saw nothing left of the TK. Wow...

A great game nonetheless. There are lessons for both of us. I think YC is still learning his army and took everything to play! LOL! More focus is needed if that list is to be more competitive. I was really hating the leaping death ray from his Casket. Ouch.